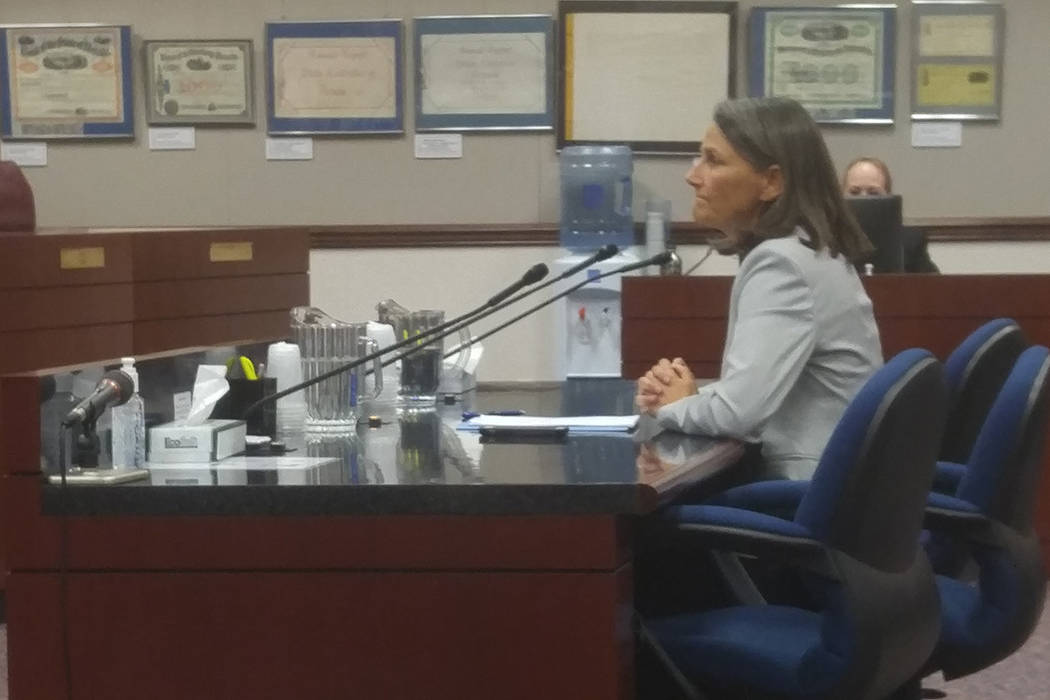 Sen. Julia Ratti, D-Sparks, talks Wednesday to the Senate Judiciary Committee about a measure intended to keep firearms from people who pose a danger to themselves or others. (Ben Botkin/Las Vegas Review-Journal)

CARSON CITY — It may be easier to keep firearms out of the hands of people in Nevada who are considered to be a risk to themselves or their family members.

Senate Bill 387 would allow a law enforcement officer or an immediate family member to seek a civil court order that would keep the person from having firearms in their possession. The measure would not require the person to be arrested before taking their firearms, but they would have to show a pattern of either threats, or violent acts.

Sen. Julia Ratti, D-Sparks, a sponsor of the bill, said the intent is to be a tool for law enforcement and be used only “when there is a clear and present danger that needs to be addressed.”

“We believe that this is an appropriate and very limited” restriction, Ratti told the Senate Judiciary Committee on Wednesday.

The bill would require a person to be ordered to turn their firearms and ammunition over to law enforcement or a licensed firearms dealer. The bill also has a provision allowing the person to get their firearms back after the order expires.

The bill has support from crime victims, therapists and the Nevada Gun Safety Coalition. Supporters said the bill could prevent tragedies like the mass shooting in 2011 at an IHOP restaurant in Carson City. In that shooting, the gunman killed four people before committing suicide.

Senate Minority Leader Michael Roberson, R-Henderson, said he was concerned the bill was overly broad and may infringe on Second Amendment and due process rights.

He compared the bill to “Minority Report,” a futuristic 2002 Tom Cruise film with law enforcement officers who arrested people before they commit murders because their crimes were predicted.

Second Amendment and gun rights advocates, including the National Rifle Association, criticized the bill because it takes away firearms from people without an arrest.

Daniel Reid, a lobbyist with the National Rifle Association, said the “bill takes away Second Amendment rights” and has a low standard for evidence.

“The standard is not low,” Ford said.

The committee didn’t take action on the bill Wednesday.