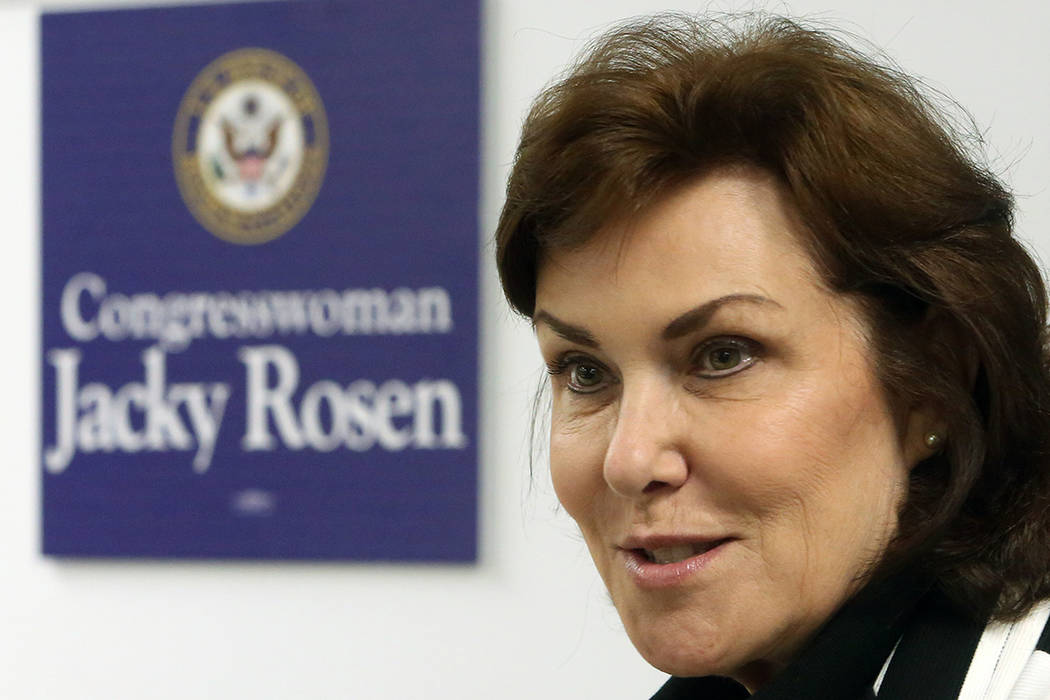 CARSON CITY — In response to a new ad by U.S. Sen. Dean Heller’s campaign, U.S. Rep. Jacky Rosen has disclosed she earned a college degree in computing more than 30 years ago.

The 30-second digital ad released last week claims that Rosen, who hopes to unseat Heller this fall, lied in a 2017 C-SPAN interview about earning a degree in computers and that the business Rosen said she ran from the mid-1990s to early-2000s “didn’t exist.”

Rosen earned an associate’s of applied sciences in computing and information technology in 1985 from Clark County Community College — what is now the College of Southern Nevada — according to an official transcript reviewed by the Review-Journal. A CSN spokesman also confirmed the degree to the Review-Journal.

The degree is not listed on either her congressional biography or on her campaign website, and does not appear to have been made public until this week.

“I know how hard I worked waiting tables to help get my college degree and be the first in my family to graduate college, and I know how hard I worked to build my career as a computer programmer and as an independent consultant,” Rosen said. “Like many women, I’ve faced this my whole life and I’m not going to let it distract me from fighting for Nevada.”

“It has been 42 days since we first raised questions about Jacky Rosen’s degree, and in that time her campaign has claimed she misspoke and asked for corrections from other news outlets. Now that it has been revealed that she also lied about building a business, suddenly she remembers getting a degree in ‘computers’ at a school she has never once mentioned she attended. Why was she hiding this and what else is she hiding?” Schipper said in a statement to the Review-Journal.

Stewart Boss, Rosen’s campaign spokesman, said the Rosen camp had decided not to respond to a June 4 statement from Heller’s campaign questioning her credentials. The release of the ad prompted the campaign to disclose Rosen’s degree, he said.

“We’re correcting the record, and Senator Heller should apologize for his baseless lying and try to move on from this embarrassing episode,” Boss said.

In the C-SPAN interview, Rosen was asked how she made her way from Chicago, where she grew up, to the University of Minnesota and eventually to Southern Nevada.

“I actually got a degree in psychology, and in computers, I actually learned how to, I’m a computer programmer, systems analyst by trade.” she said.

The ad stops the clip after the word “computers,” and shows the words “No computer degree. She made it up.”

The June 4 statement questioning Rosen’s education credentials cited a since-corrected Jan. 25, 2017, article from The Atlantic that listed Rosen as having a bachelor’s degree in computer science.

The Atlantic story now lists Rosen as having a psychology degree, and a correction at the bottom reads:

“This article originally stated that Jacky Rosen has an undergraduate degree in computer science; her degree is actually in psychology, and she later built a career as a computer programmer. We regret this error.”

Boss said the Heller ad used a “deceptively edited” clip of the C-SPAN interview to misrepresent her words. Boss added that Rosen earned the degree while also working for Summa Corp. in the mid 1980s to help “advance her career as a computer programmer and software developer.”

The ad also attacks Rosen for claiming in several interviews and speeches that she built a business. The ad cited a Reno Gazette-Journal story that said there is little in the way of public records showing such a business. The story said there are no records of Rosen having a state or local business license for the consulting company she claims she ran from the early 1990s to early 2000s.

The Heller ad latches onto that lack of paper trail, calling it “an imaginary business” that “didn’t exist.”

Rosen worked for Southwest Gas from 1990 until 1993, and she said she became a Henderson-based independent consultant afterwards until the mid-2000s, with clients that included Southwest Gas and Radiology Specialists Ltd. — where her husband was a partner at the time — providing work that included updating the customer service support software and and creating a new billing system. Boss said that she had no employees.

Stephanie Klapstein, spokeswoman for the Nevada Department of Taxation, which then handled state business licensing, said that back then if a business had no employees that they were not required to have a registered business with the state.

“The City of Henderson would have no way of determining whether or not that individual had a business license during the specified period of time,” Cherry said.

Rosen’s personal finance disclosure, something all candidates are required to file that show their income and investments, lists a “Self Employment IRA” valued at $1,001 to $15,000.

A resignation letter Rosen sent dated Sept. 15, 1993, which was reviewed by the Review-Journal, said she was leaving Southwest Gas for personal reasons and that she “would be happy to contribute to technical support on an as needed consulting basis.”

Mary McCrary, former director of technical services at Southwest Gas, said she worked with Rosen in the early 1990s and remembered her transition from employee to consultant in which role Rosen helped support the company’s expanding infrastructure. McCrary donated $50 to Rosen’s 2016 campaign for Congress.

Rosen said Heller is attacking her because “he’s got nothing else to run on.”

“It’s nothing new for women running for office to have their experience baselessly dismissed or their qualifications questioned,” Rosen said.