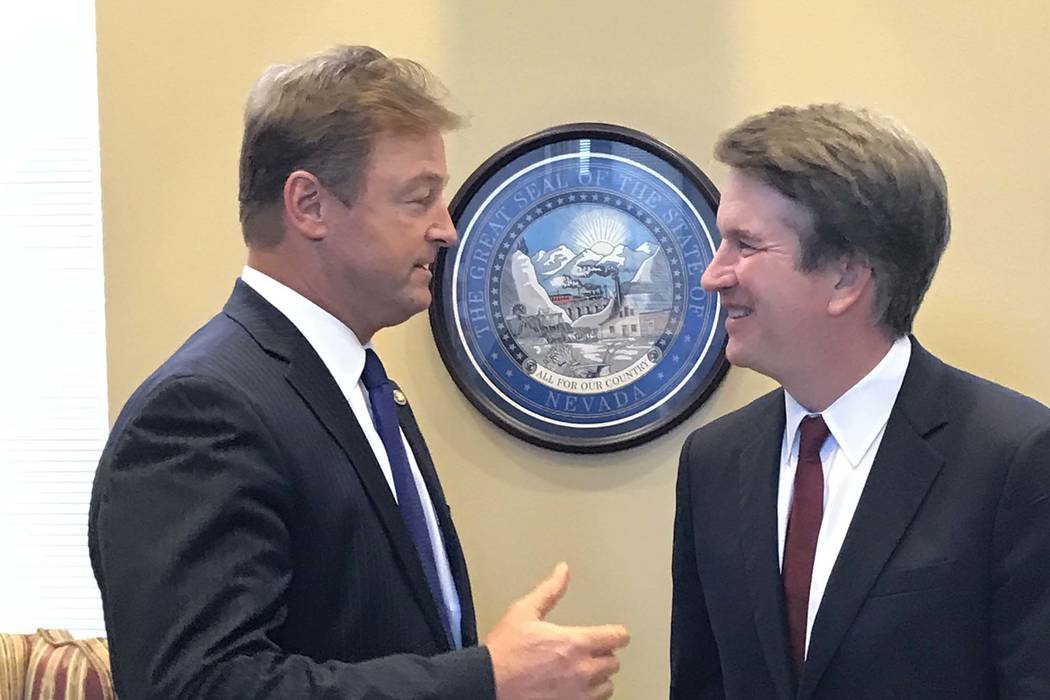 Heller met with Kavanaugh, 53, in his Capitol Hill office and talked with him about judicial temperament, precedent and a previous appellate court ruling involving a Department of Energy application for a construction license to build a nuclear waste repository at Yucca Mountain.

“I have no reservations,” Heller told the Review-Journal after the meeting. “I’m very confident.”

Kavanaugh was nominated by President Donald Trump this month to fill a vacancy on the high court following the announced retirement of Justice Anthony Kennedy, who was appointed by President Ronald Reagan.

Kennedy became a swing vote on the court, voting with the conservative wing on cases involving organized labor, gun rights and the 2000 presidential election, which ruled in favor of Texas Gov. George W. Bush over Vice President Al Gore.

But Kennedy also voted with the liberal faction on abortion rights and gay marriage.

The loss of Kennedy from the court has abortion rights and liberal groups concerned with the shifting philosophical balance with the nomination of Kavanaugh, a conservative vetted by the Federalist Society before his nomination.

Sen. Catherine Cortez Masto, D-Nev., and other Democrats in the Senate plan a thorough review of Kavanaugh’s background. A meeting between Kavanaugh and Cortez Masto has yet to be scheduled.

Senate Minority Leader Chuck Schumer, D-N.Y., said he will fight the nomination. He said Kavanaugh is out of the mainstream and would put a conservative extremist on the court who could vote to overturn Roe v. Wade, the 1973 case that protected abortion rights nationwide.

Democrats also claim that confirmation of Kavanaugh would result in rulings that could reverse health care protections.

Senate Majority Leader Mitch McConnell, R-Ky., praised Kavanaugh as a mainstream jurist and predicted he will be confirmed this fall.

Republicans hold a paper-thin 51-49 majority in the Senate. Sen. John McCain, R-Ariz., is battling cancer and has not voted on the Senate floor since last year.

McConnell can afford to lose only one Republican without picking off moderate Democrats in red states to confirm Kavanaugh.

Heller is the only Republican facing re-election in a state won by Hillary Clinton in 2016. He has embraced Trump policies on tax cuts, border security and supported the nomination of Justice Neil Gorsuch.

The Republican senator is being challenged by Rep. Jacky Rosen, D-Nev., in a race that strategists in both parties expect to be hard fought and close.

Support by Heller of Kavanaugh was not unexpected. During the 30-minute meeting, Heller said they spoke about personal interests, like sports and education.

“We had a great conversation,” Heller said. “I think he is a solid jurist.”

The two also spoke about judicial matters, and particularly a ruling on a case involving Yucca Mountain.

Kavanaugh wrote a 2013 majority ruling by a three-judge panel on the U.S. Circuit Court of Appeals for the District of Columbia that instructed the Nuclear Regulatory Commission to continue spending $11 million in funds appropriated by Congress to hear the DOE’s license application to construct a nuclear waste repository at Yucca Mountain.

The ruling was made in a case brought by Aiken, South Carolina, after the Obama administration cut funding for the licensing process due to public and political opposition to Yucca Mountain in Nevada.

Kavanaugh wrote that the ruling does not prejudge the NRC’s consideration or decision, or affect “any Department of Energy attempt to withdraw the license application.”

“But unless and until Congress authoritatively says otherwise or there are not appropriated funds remaining, the Nuclear Regulatory Commission must promptly continue with the legally mandated licensing process,” Kavanaugh wrote.

Heller queried Kavanaugh about the ruling.

“I asked him specifically if he had a position on Yucca Mountain and he said, ‘Read the ruling,’ ” Heller said. “He said he does not and (the ruling) states that.”

Licensing hearings eventually were halted. Trump has proposed funding to kickstart those hearings, although differences between the House and Senate have blocked funding to resume them.

Ironically, the dissenting opinion in the case was written by Chief Judge Merrick Garland, President Barack Obama’s nominee to fill the Supreme Court vacancy after the death of Justice Antonin Scalia.

Garland said issuing a writ forcing the NRC to continue with the licensing until the funding was depleted was directing the agency to do “a useless thing.”

Kicking off my meeting with Judge Brett Kavanaugh. pic.twitter.com/U3E5HivSlg