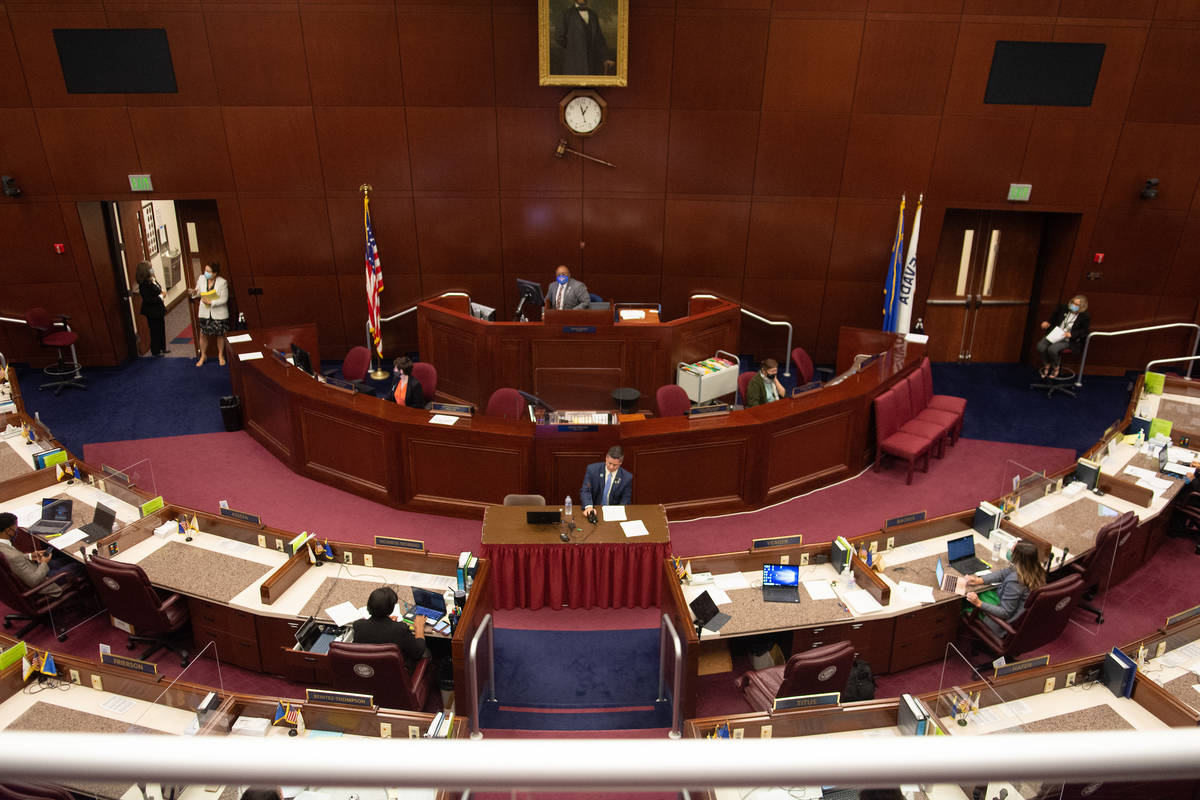 The Assembly also passed a third measure, Assembly Joint Resolution 2, which emerged on Saturday after discussions with mining companies.

AJR2 “represents an effort to collaborate with the mining industry for compromise,” Speaker Jason Frierson, D-Las Vegas, said around midnight Sunday. “And so this is in a simplest terms a reflection of an olive branch with the industry with some serious work that has been done to get to this point.”

Action in the Assembly on the three resolutions began shortly after 9 p.m. Saturday and continued until nearly 1:30, first with committee hearings and lengthy public testimony on each of the bills. In each case, advocates praised efforts to raise taxes on what they described as a powerful, politically sheltered industry, while opponents decried selective and potentially destructive taxation of that same industry.

After the Assembly hearings, the items were adopted in rapid succession; the two Assembly versions now move to the Senate for consideration.

The original Senate and Assembly proposals would remove the constitutionally-prescribed 5 percent tax cap on net proceeds of minerals mined and replace it with a 7.75 percent tax on mining’s gross proceeds. The difference, based on 2019 industry revenues and tax collections, could be an additional $350 million in revenue annually.

Mining company revenues fluctuate with the price of minerals. Gold and silver mining makes up more than 90 percent of the overall industry take in Nevada, and the price of gold is currently hovering at record levels, driven up by economic uncertainty caused by the global pandemic.

AJR2, would set the net mining tax at the local property tax rate, capped at no more 12 percent. Mining interests who testified in neutral on the measure said it would lead to further collaboration on establishing fair tax policy changes for their business.

The Senate vote on SJR1 was 13-8, with Republicans, who tend to represent the more rural areas of the state where mining predominates, voting no and predicting the collapse of the industry. The same party line division emerged in the Assembly: AJR1 and SJR1 both passed 29-13, with Republicans united in opposition. But the vote on AJR2 was 25-17 after Democrats Ellen Spiegel, Maggie Carlton, Richard Carrillo and Dina Neal joined Republicans in voting no.

The Senate’s proposal would send half of the mining tax revenue to the state general fund and divert the rest to a future program that would distribute a dividend to state residents, similar to how Alaskans receive dividends from taxes on that state’s oil industry.

AJR1 would allocate more money to programs hurt hardest by COVID-19 economic crisis, with 25 percent of the revenue going to education and health care and the remainder to the state for general purposes.

In public testimony on the measure Friday, many who supported the concept said they favored the Assembly version. As proposed constitutional amendments, all of the resolutions would would have to pass the Legislature again in 2021 before going to voters in 2022.

The Senate proposal “will destroy mining in Nevada. There’s no doubt in my mind,” said Sen. Pete Goicoechea, R-Elko, during debate Saturday. “There’s no industry that can support a 7.75 percent (tax) of its gross. I don’t care what business you’re in. You can’t take it off the top. There’s just too much difference in different industries. I’m asking the body to not destroy rural Nevada.”

Under the current system, roughly half the tax collected from mining goes directly to counties where the mines are located. Both AJR1 and SJR1, if approved eventually by voters, would do away with that direct allocation to local governments. (AJR2 would not affect local taxes.)

Besides defending the increase in the mining tax as fair and necessary, given the state’s pandemic-driven budget crisis, proponents said they would not support an eventual tax scheme that would harm local governments. Given the depth of the current crisis, the state’s need is urgent and immediate, they said.

“Because the constitutional amendment process is a lengthy process, if we don’t act now to get it started, then mining, and mining revenue once again will not be part of a meaningful conversation to address what is going to be a COVID-related significant dip in our revenue that is going to affect the ability of the state to remain fiscally sound,” said Sen. Julia Ratti, D-Sparks, the assistant majority leader.

She added: “If there’s anybody in this body who believes that I’m going to be voting for something that’s going to devastate the budgets of local governments, then you haven’t been listening to me for the last couple years.”