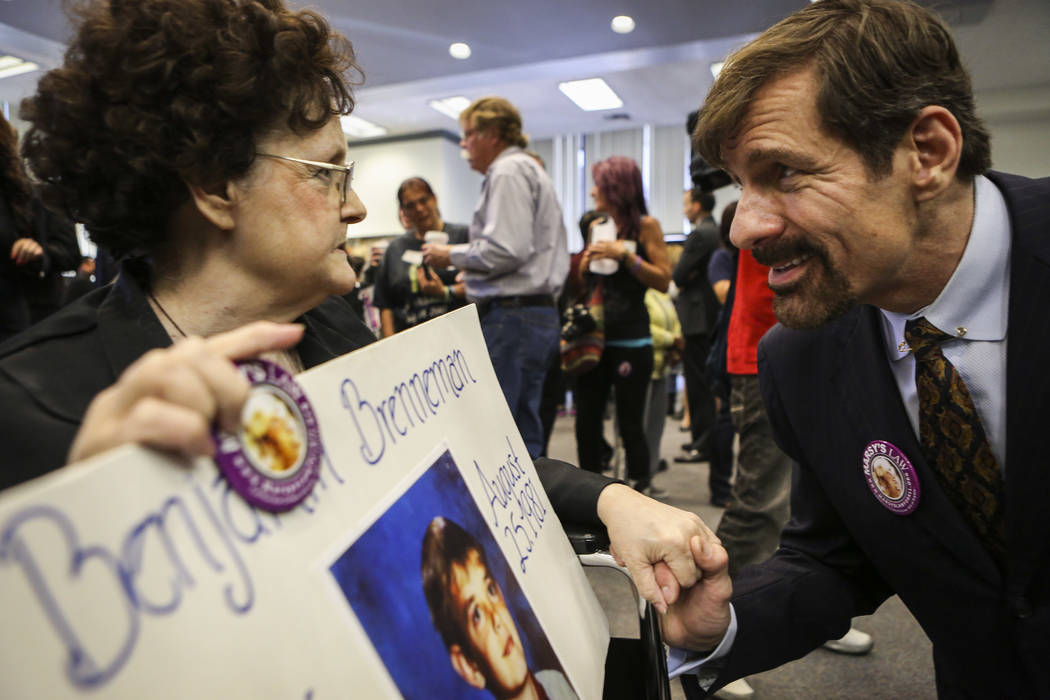 Henry Nicholas III speaks with the mother of a murder victim during a 2013 Orange County Victims' Rights March in Santa Ana, Calif. Nicholas is the chief architect of Marsy's Law, named for his sister Marsalee Nicholas. (Bret Hartman/The Associated Press) 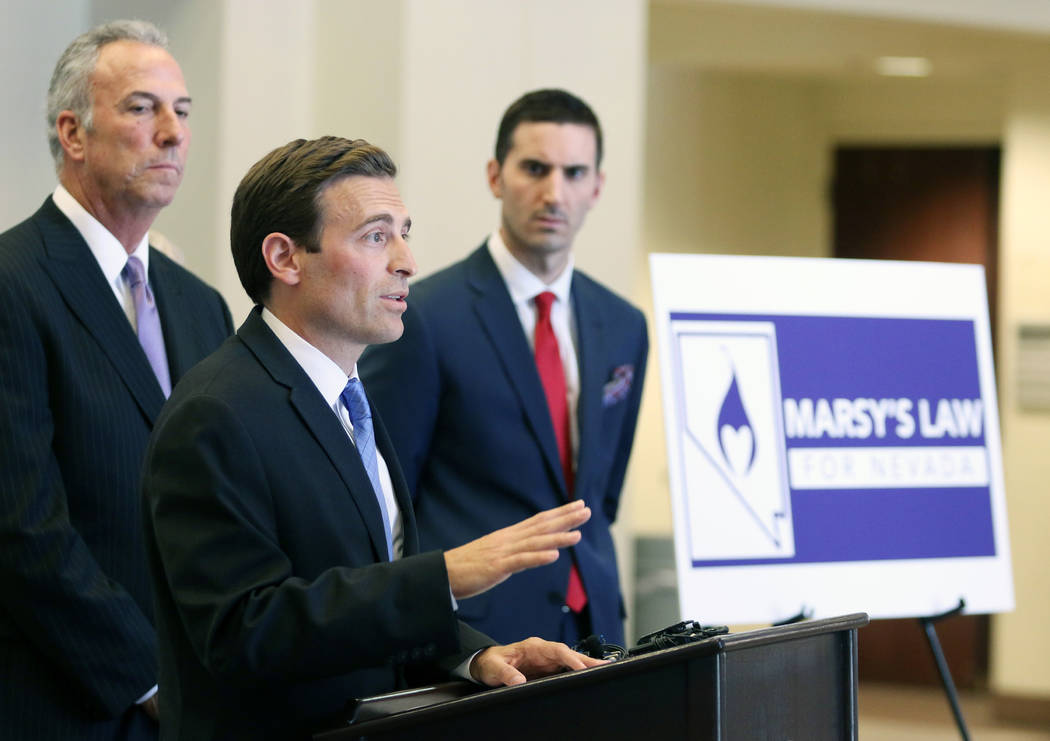 Backers of the measure, Question 1 on the November ballot, say it will ensure “equal rights for crime victims” in Nevada by embedding rules into the state constitution.

“None of us ever knows if we ourselves, a family member or close friend may become a victim of crime one day,” said Will Batista, Marsy’s Law for Nevada state director. “We want to be sure that if that day comes, your rights in the Nevada Constitution as a victim are just as strong as (those of) the person who dragged you into the criminal justice system in the first place.”

But civil rights leaders fear that the measure could have unintended consequences.

“Marsy’s Law is a costly, experimental unfunded mandate that undermines our system of justice while providing no true additional protections for crime victims,” said Holly Welborn, policy director for the ACLU of Nevada. “The state’s efforts should be focused on expanding services for victims of crime, such as housing assistance, therapeutic services and other programs that help victims heal.”

Nevada law already provides crime victims with certain rights, such as a speedy trial and notice about court hearings, but Question 1 would expand those rights and enshrine them in the state constitution. That’s a sticking point for opponents, who say that the constitution is hard to change and that it could take years to fix any problems with the law.

The measure outlines 16 rights for victims including privacy, protection from the defendant, notice of all public hearings, full and timely restitution and refusal of interview or deposition requests unless a court so orders.

Marsy’s Law, which has been enacted in 13 states, was crafted by California billionaire Henry T. Nicholas, co-founder of the semiconductor company Broadcom. The effort started after his sister, Marsalee “Marsy” Nicholas, was killed by her ex-boyfriend in 1983. He then confronted her family, who had no idea he was out of jail.

Nicholas, who was arrested this month in Las Vegas on suspicion of drug trafficking, has solely funded the Nevada measure, pouring $370,000 into the “yes” campaign since June.

There is no organized campaign or spending on the “no” side, but opponents say the measure is complex, costly and confusing.

The measure expands the definition of a “victim” to any person “directly and proximately harmed” by the crime. Opponents say that makes it difficult to determine who the real victim is and expensive for law enforcement to identify and notify that person.

It also requires money collected from a person ordered to pay restitution to go to the victim first, before it’s applied to any fines, fees, assessments or forfeitures, resulting in a reduction in state revenue.

And allowing victims to refuse interviews or depositions could undermine defendants’ ability to prove their innocence. The measure could also result in legal challenges. If it passes, the ACLU of Nevada will consider its legal options, officials said.

The law has faced legal challenges in California, South Dakota, Montana and Florida.

Last year, the Montana Supreme Court stripped Marsy’s Law because it changed multiple sections of the constitution without allowing a vote on each element.

But Batista argues that the measure simply places the “rights of the victims on the same footing with those of the accused.”

Marsy’s Law was approved by the Legislature in 2015 and 2017, and it will become law if Nevada voters approve it Nov. 6.