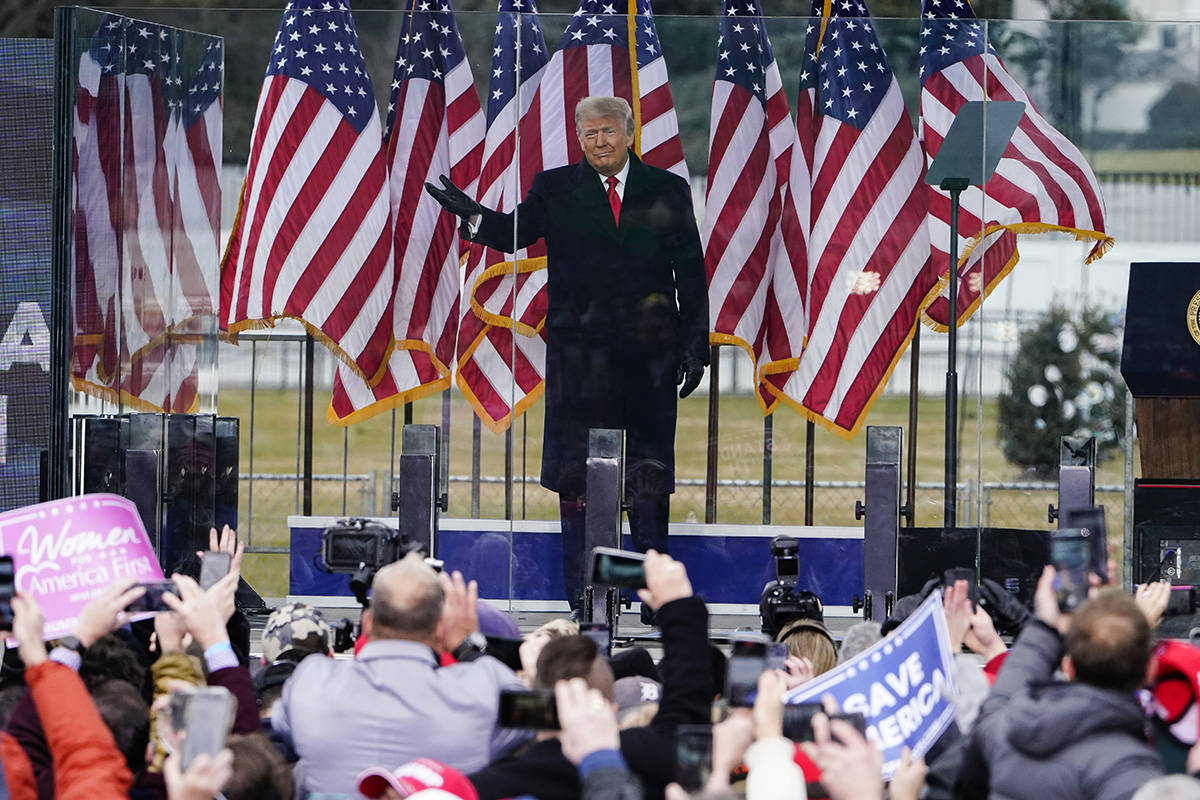 In this Jan. 6, 2021, photo, President Donald Trump arrives to speak at a rally in Washington. (AP Photo/Jacquelyn Martin)

The chairman of the Nye County Republican Central Committee has posted a conspiracy-filled letter to the group’s website, accusing Vice President Mike Pence of treason, alleging that Antifa groups were responsible for the invasion of the Capitol on Wednesday and claiming President Donald Trump will serve another four years as president.

The lengthy missive, attributed to Chairman Chris Zimmerman, also claims Trump left Washington on a “Doomsday” aircraft during the Capitol chaos, that 2020 election votes were changed via satellite and compares the final days of the Trump administration to the revolution of 1776.

“Let me be clear: Trump will be president for another four years. Biden will not be president,” the letter says, referring to President-elect Joe Biden. “Yes, I know those are shocking words in these crazy days.

“Indeed, we will have a new administration made up of a new vice president and cabinet, as the current ones have all made their treason complete,” the letter adds.

Nye County, a mostly rural area in Southern Nevada, is a reliably Republican area perhaps most famous for electing a deceased brothel owner to the state Assembly in 2018.

On its Facebook page, the Nye County party acknowledged the message was real, and said it was getting a big reaction.

“We are getting Private Messages every few seconds in regards to the ‘letter from the chairman written Friday.’ We cannot keep up with all the responses,” the Facebook post said. “We apologize if we have not responded. thank you for your prayers and for your questions.

“To answer the #1 question being asked: It is legitimate. Our chariman (sic) researches this stuff 3-4 hours a day and is a man of integrity and honesty. If he didn’t believe it honestly, he would not have written. It was written to our membership to give them hope as we are seeing much despair. www.nyegop.org. Some sources are embedded in the blog post from the website. We are seeing a lot of traffic on our website, so if you see an error keep retrying.”

Attempts to reach Zimmerman for comment were unsuccessful Sunday.

“I have news for the Chairman. It’s not 1776 and the failed attempt of a coup involving some Republicans is sedition against the will of the people and our democracy. Any suggestion otherwise is a refusal to accept reality,” Horsford tweeted.

As representative of #NV04, where Nye County is, I have news for the Chairman. It’s not 1776 and the failed attempt of a coup involving some Republicans is sedition against the will of the people and our democracy. Any suggestion otherwise is a refusal to accept reality.

Horsford, who has called for Trump’s impeachment in the wake of the Capitol riot, said Zimmerman’s letter was “seditious,” adding that the “effort to intentionally stoke division and incite criminal acts against our government must be rejected and condemned by everyone who believes in our democracy.”

Horsford continued by saying that Zimmerman’s letter should be taken down and called on Republicans to denounce it and the conspiracies it contains.

The state lawmakers whose districts include most of Nye County — Republicans Sen. Pete Goicoechea and Assemblyman Gregory Hafen — did not respond to requests for comment Sunday.

The letter claims Trump intentionally was tardy to his Wednesday rally, delaying his supporters to expose the fact that Antifa — a word referring to left-leaning “anti-fascist” protesters — was behind the Capitol rioting.

“With Trump speaking late and long, the MAGA (Make America Great Again) crowd was PROTECTED and SEPARATED from the Antifa groups,” the letter reads. “It would be very clear that the disguised Antifia people were 95%+ of the people in the building.

“This was clearly a staged event meant to blame Trump supporters and try to frame Trump so the 25th Amendment could be used by Congress, but it failed. Nevermind the numerous videos showing the police opening the gates for Antifa (they didn’t fight their way in) and then leading them throughout the building.”

In fact, according to numerous media reports, FBI Assistant Director Steven D’Antuono has said there is no evidence Antifa groups were involved in the storming of the Capitol. The fact-checking website Politifact rated claims to the contrary as “pants on fire.”

The letter accuses Pence of treason and of conspiring “…to oust Trump sometime during his first four years that was orchestrated by Rod Rosenstein and supported by the Clintons. The plan: get rid of Trump, become president and then appoint (former Assistant Attorney General) Rod Rosenstein as the new VP. Why would they want that? Because they felt Pence could be controlled.”

In fact, although Trump called on Pence to reject Electoral College votes that cemented Biden’s victory, the vice president said his duty was simply to preside over a joint session of Congress that counts the votes. It was that joint session that was interrupted by a invasion of rioters who damaged property, rifled through offices and engaged in scuffles that took the life of a Capitol police officer.

“It is my considered judgment that my oath to support and defend the Constitution constrains me from claiming unilateral authority to determine which electoral votes should be counted and which should not,” Pence wrote in a letter to members of Congress, according to the Associated Press.

Rep. Mark Amodei, the Republican from Carson City, said he didn’t know Zimmerman and hadn’t read the missive, but spoke up to defend Pence when read the allegations against him.

“When you look up loyalty in the dictionary, there’s a picture of Mike Pence looking back at you,” Amodei said. “Nobody has had a harder job in the last five years, but he has hit it out of the park. He’s an all-American.”

Amodei voted in Congress to certify the election results from all states, including the disputed states of Arizona and Pennsylvania.

The letter makes other outlandish claims, including that “the president, following the capitol incident, left DC on a ‘Doomsday’ aircraft (used for communications in the event of a nuclear war) with his family and was in Abilene, TX. This aircraft was confirmed by both flight trackers and eyes on the ground.”

It also predicts that in the waning days of the administration the emergency broadcast system will be activated, ostensibly “to send messages from the president to the public,” that “high-profile arrests” will take place, and that there will be an internet blackout.

“If you don’t have alternative forms of communication established now, it would be a good idea to start forming them,” the letter says.

It also repeats an oft-debunked conspiracy theory that a defense contractor “used satellites to change the votes from our election in the USA from Italy. These Dominion voting machines were actively sending data to Germany, Serbia, China, Iran and now Rome. This corruption is MUCH bigger that any of us expected but none of us would have believed it until now.”

A USA Today fact check on this claim found it was baseless. “The claims in both videos on “ItalyGate” are baseless. They are also easily contradicted by statements from multiple federal officials who have found no proof of electoral fraud,” the newspaper concluded.

The letter ends by comparing the end of the Trump years with the American Revolution: “The next 12 days will be something to tell the grandchildren! It’s 1776 all over again!” it says.