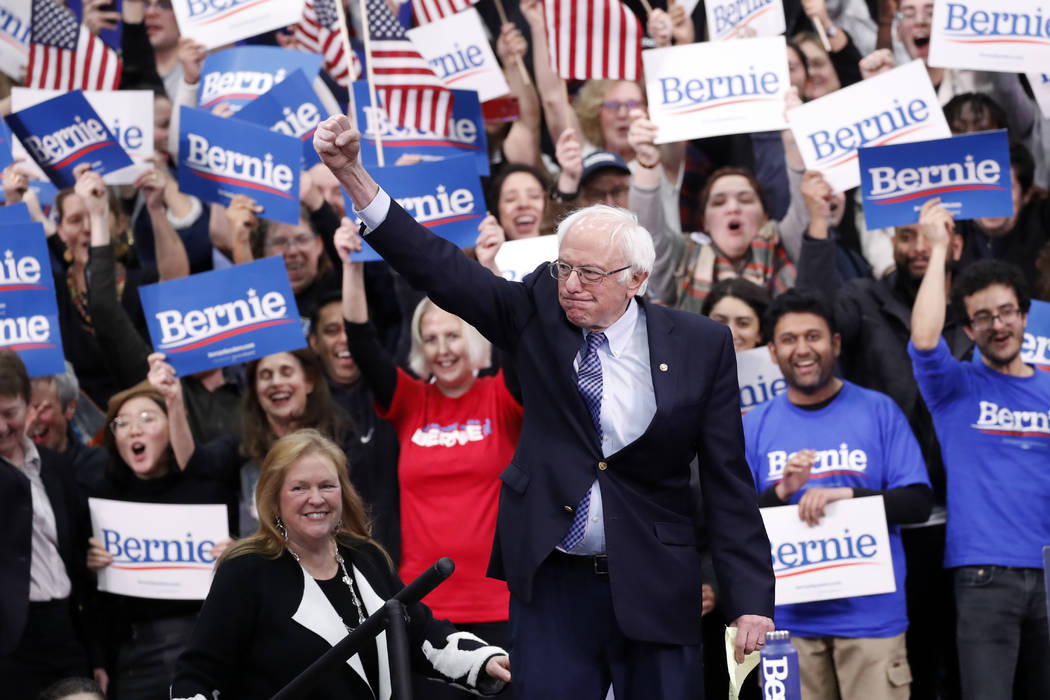 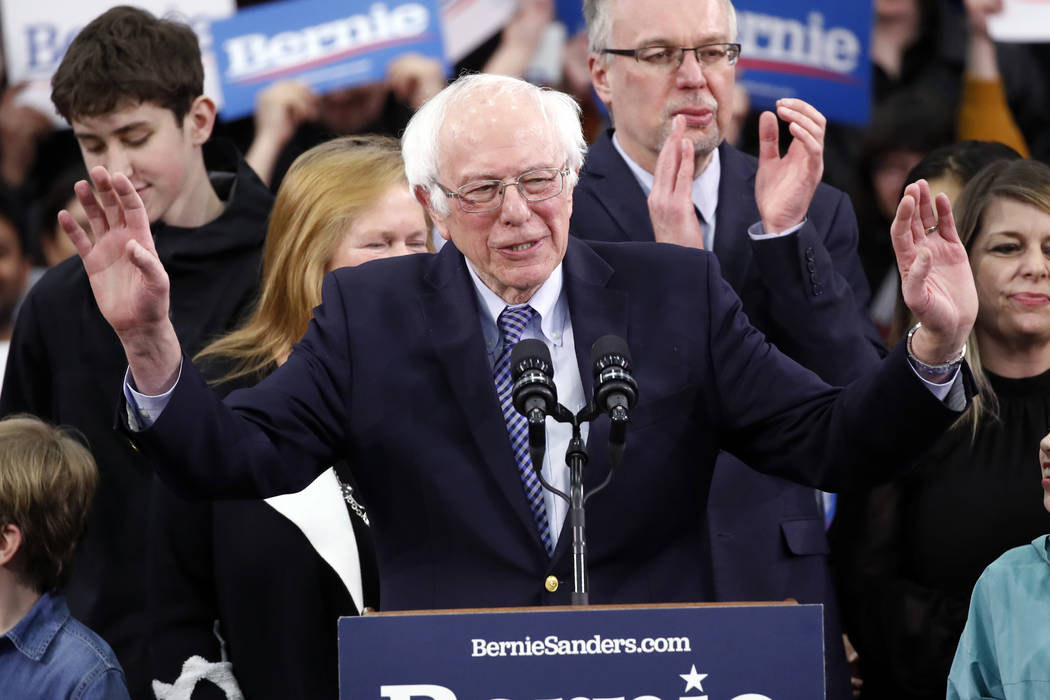 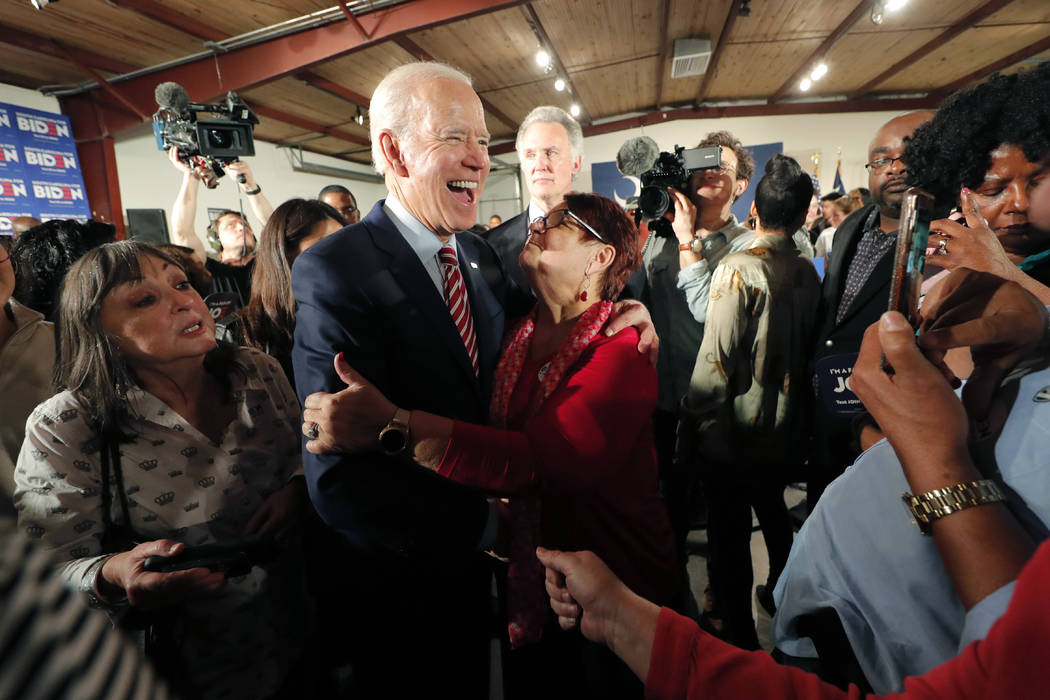 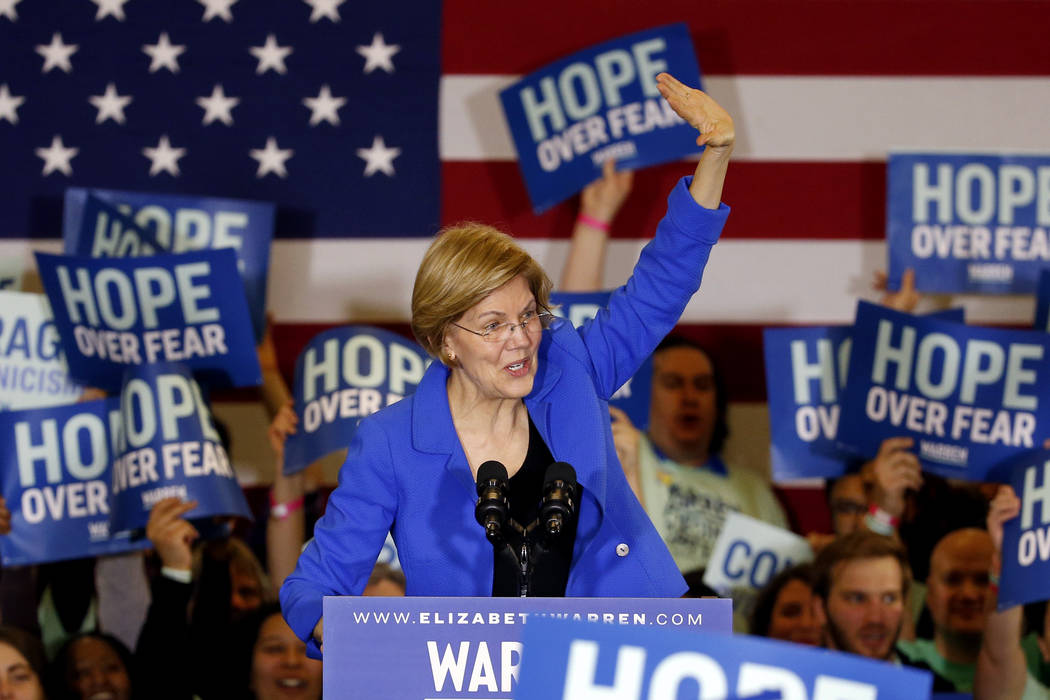 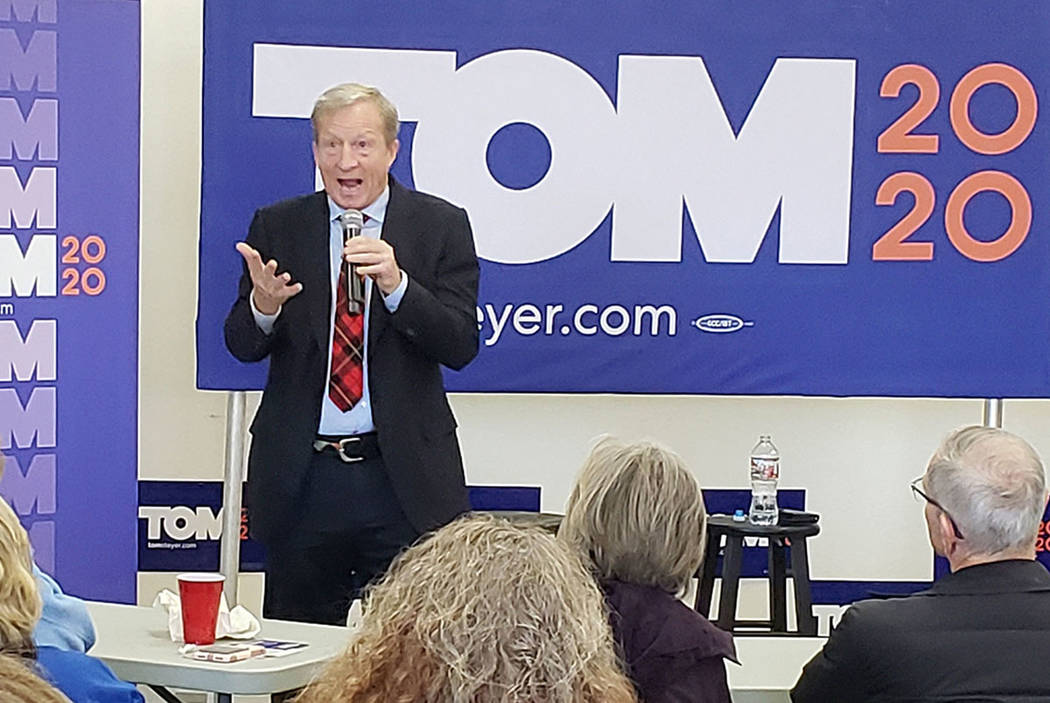 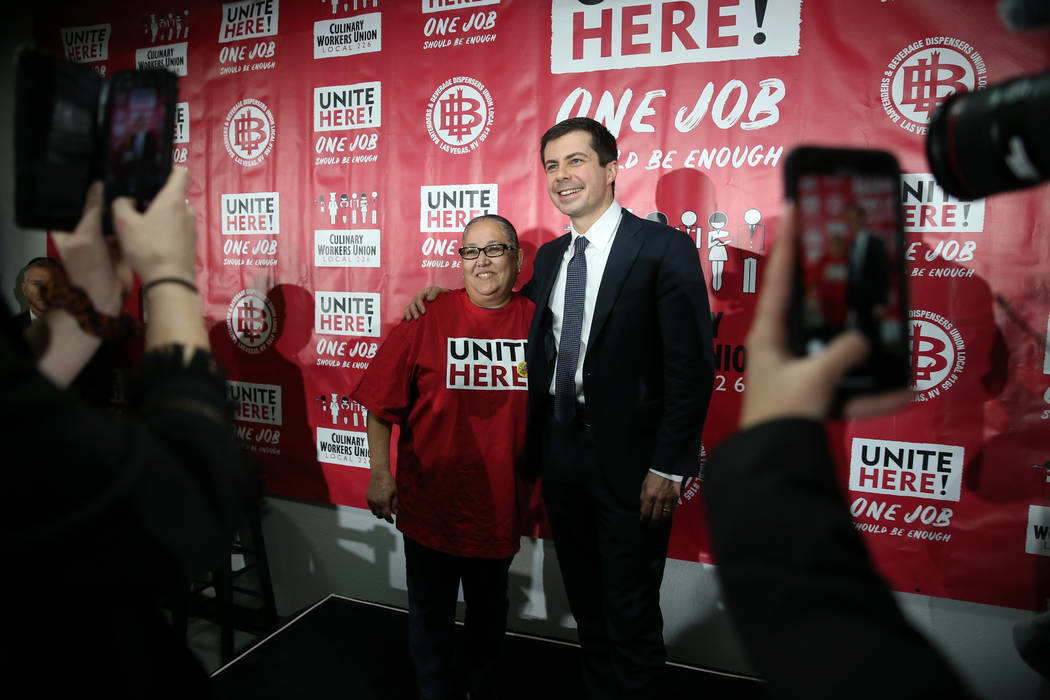 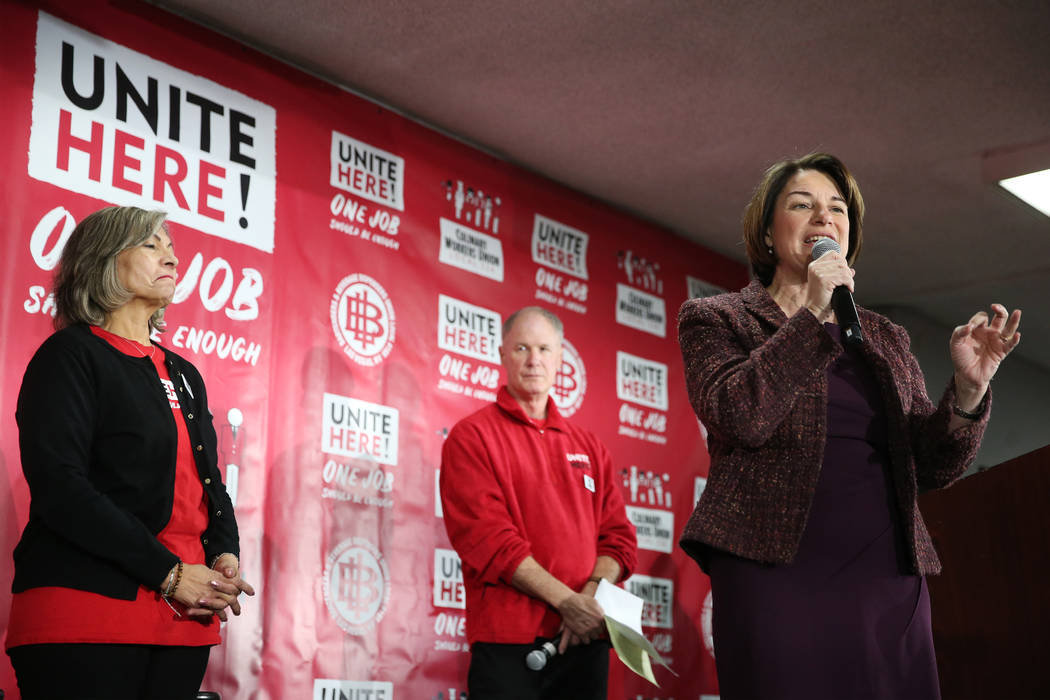 Vermont Sen. Bernie Sanders leads the presidential field by a solid margin among likely Democratic caucus-goers heading into Nevada’s four-day early voting period, but all six of the candidates actively campaigning in the state this week earned double-digit support according to The Nevada Poll™.

The telephone poll, conducted by WPA Intelligence on behalf of the Las Vegas Review-Journal and AARP Nevada, contacted 413 likely caucus attendees from Tuesday through Thursday.

Eight percent of Democrats surveyed said they were undecided.

Rep. Tulsi Gabbard of Hawaii is on the ballot, but she has not actively campaigned in Nevada and received zero support in the poll.

Former New York City Mayor Michael Bloomberg is not on the ballot.

The margin of error was 4.8 percentage points.

WPA research director Trevor Smith said Wednesday’s debate may alter the poll’s results slightly, but he noted that 59 percent of respondents said they would vote early from Feb. 15-18. Caucus day is Feb. 22.

“The debate may be too late for any of these candidates to really make the adjustments they need,” Smith said.

He noted that Sanders had a firm grip on voters who identified as very liberal (33 percent for Sanders) and somewhat liberal (31 percent). Warren is competing for the very liberal with 32 percent of their support, but not anywhere else.

Campaign representatives for Biden, Sanders, Klobuchar and Buttigieg did not respond to a request for comment. A spokesman for Warren’s campaign declined to comment.

Steyer, interviewed by the Review-Journal later in the day, said his internal polls have him earning more support than what’s reflected in the newspaper’s poll. He also lamented a general lack of polling in Nevada and South Carolina, which he said is keeping him from qualifying for Wednesday’s debate.

Sanders enters Nevada with momentum from the first two early states, Iowa and New Hampshire, strong polling in the Silver State over the past year and tons of resources, including 200 staff members and more than 1,000 volunteers.

Biden, who had consistently polled in the top spot in Nevada, has struggled in the first two states. But his campaign has always planned to rally in Nevada, the first ethnically diverse state to weigh in on the nomination. He has visited regularly since entering the race, and he’s peppered the state with surrogates over the past few months.

Smith said Biden is continuing a downward trend and would likely fall further because Klobuchar, Steyer and Buttigieg are competing for moderate support.

“One or two of these three alternatives may be able to entrench themselves within this lane prior to the primary,” Smith said. “My bet would be on Senator Klobuchar.”

Warren has had staff members on the ground in Nevada for over a year. Like Biden, she is looking to rally in Nevada, where her support has waned since the fall. She has a number of high-level endorsements in Nevada, including several of the state’s Democratic National Committee members.

Steyer, a Californian, has sunk considerable time and money into Nevada since entering the race late. While the field was in Iowa, Steyer was in Nevada. He has begun polling consistently in the double digits, and he also looks to appeal to diverse communities to right his campaign after poor showings in Iowa and New Hampshire.

Buttigieg brings momentum and a razor-thin delegate lead over Sanders, but he’s polled poorly in Nevada. The Review-Journal poll appears to be the first time he’s measured double-digit support in Nevada, where he will look to prove wrong the doubts about his ability to appeal to diverse communities. He’s invested significant time, staffing and resources in the Silver State.

Smith noted that Buttigieg “may be setting the right tone to appeal to the most ideological diverse groups,” as his support in the poll was evenly split among very liberal (14 percent), somewhat liberal (9 percent) and moderate (11 percent) voters.

Klobuchar also brings some momentum with her, but she has not invested as much time or money into Nevada as the other five challengers. She poured most of her effort into the first two states, and like Buttigieg, will now look to demonstrate her support among diverse communities. This is also apparently her first time polling in double digits in Nevada.

The entire field boasted solid favorability numbers among the respondents.

Favorability is particularly important during a caucus, as some voters may have to support their second or third choice if their ideal candidate does not get the support of 15 percent of caucusgoers at a particular site.

A majority (56 percent) of the respondents said stopping President Donald Trump was their main motivating factor in the 2020 election. Passing Medicare for All was the second priority at 9 percent.

Forty-eight percent of respondents identified as liberal, compared to 36 percent moderate and 9 percent conservative. One-quarter of those surveyed came from a union household.

The race and ethnicity breakdown of the respondents was: 58 percent white, 20 Latino or Hispanic, 13 percent African-American and 3 percent Asian-American.

An earlier version of this story incorrectly identified the day of the next Democratic presidential debate. It is Wednesday.