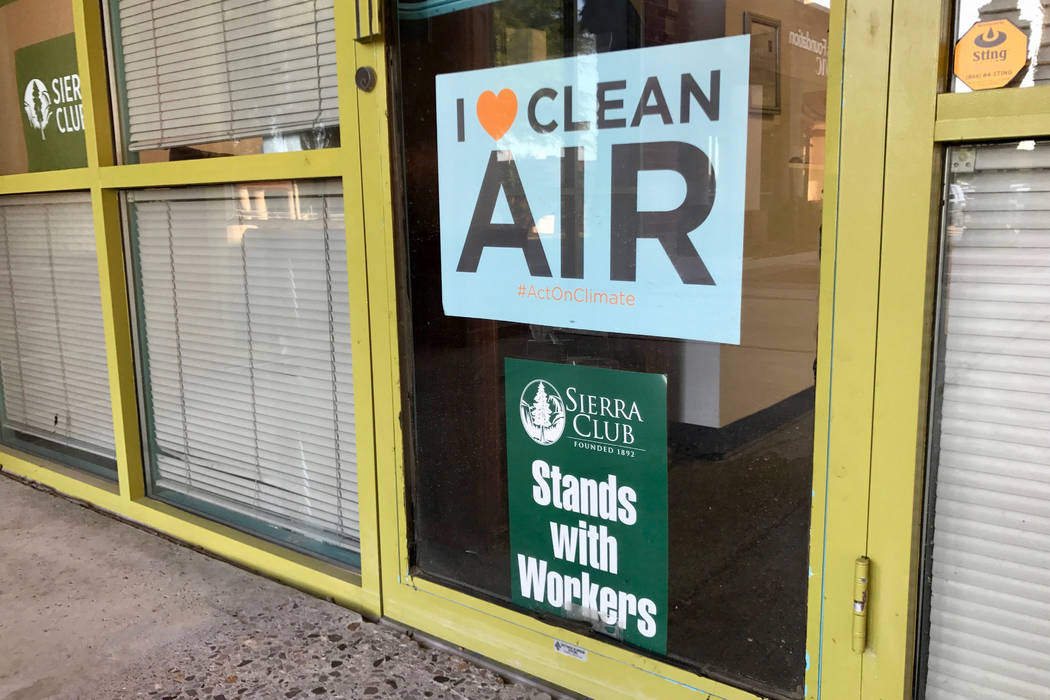 The Sierra Club, Natural Resources Defense Council, Southwest Energy Efficiency Project and Western Resource Advocates each cited concerns over market uncertainty, and what that could do to renewable energy projects underway in the state, saying the measure could “disrupt the state’s progress toward a clean energy future.”

“If Question 3 passes, it will upend the clean energy progress we’re making here in Nevada. Right now, NV Energy has big plans for new solar infrastructure, and the rooftop solar market is quickly recovering, but that may all change,” said Anne Macquarie, chair of Sierra Club’s Toiyabe chapter. “The uncertainty of a deregulated market threatens all of Nevada’s clean energy momentum, and that’s bad for jobs, it’s bad for public health, and it’s bad for clean air and water.”

The Sierra Club and NV Energy, which also opposes Question 3 and is the key funding source for the effort to defeat it, have not seen eye to eye on energy issues in the past.

The Sierra Club sued the energy supplier in 2013 over waste from a coal-fired plant, and the group has pushed for NV Energy to close its last remaining coal plant before the scheduled shuttering in 2025.

Scott Rutledge, spokesman for the Yes on 3 campaign, noted that past conflict in a statement Thursday, and rebutted the pro-renewable group’s assertions that clean energy could be dealt a blow under Question 3.

“When I was the executive director of the Nevada Conservation League, our environmental community fought NV Energy for years to expand clean energy and shut down their coal-fired power plants. And this is the same monopoly utility that eliminated rooftop solar a couple of years ago. Energy Choice will lower Nevadans’ power bills through competition and vastly expand Nevada’s renewable energy resources.”

Tracy Skenadore, spokeswoman for the No on 3 campaign, said the opposition from the clean energy groups shows that they recognize the impact the passage of Question 3 would have on renewable energy in the state.

“Nevada’s clean energy advocates recognize that Question 3 would be damaging to Nevada’s rooftop solar programs, cancel plans to double clean energy production in the state, and be a setback for existing state laws and policies designed to spur growth in our renewable energy sectors,” she said.

Robert Johnston, senior staff attorney for Western Resource Advocates in Nevada, said that since NV Energy has “changed course” on renewable energy and plans to double solar generation by 2023, taking them out of the power-generating equation would create “a cloud of legal and regulatory uncertainty that could chill the development of new renewable projects by anyone else over the next 4-5 years.”

Question 3, commonly called the Energy Choice Initiative, is a proposed constitutional amendment on the November ballot that would break up NV Energy’s monopoly on Nevada’s energy market and replace it with an open market where consumers could choose their own energy suppliers. The measure passed with 72 percent of the vote in 2016, but as a constitutional amendment it needs to be approved by voters twice before being enshrined in the state’s constitution.

The initiative is funded by Las Vegas Sands and Las Vegas data and technology company Switch, and has drawn support from several local businesses as well as former U.S. Sen. Harry Reid.