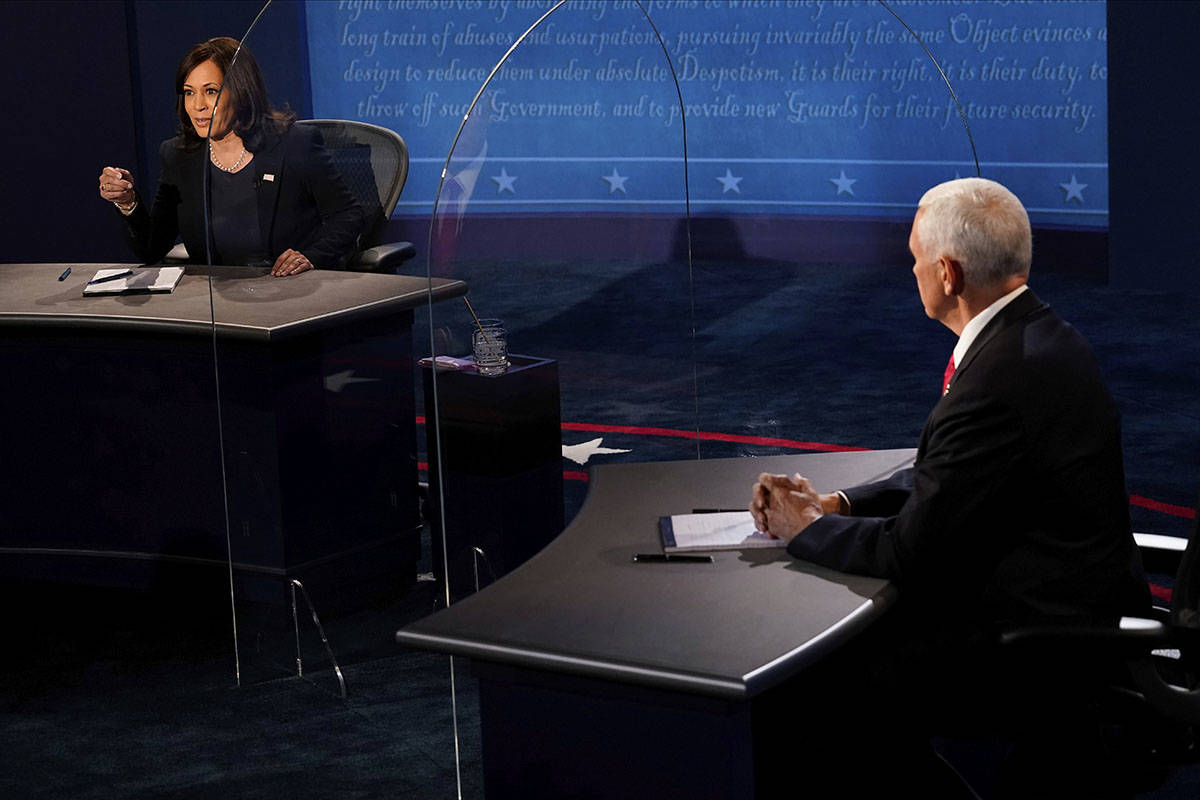 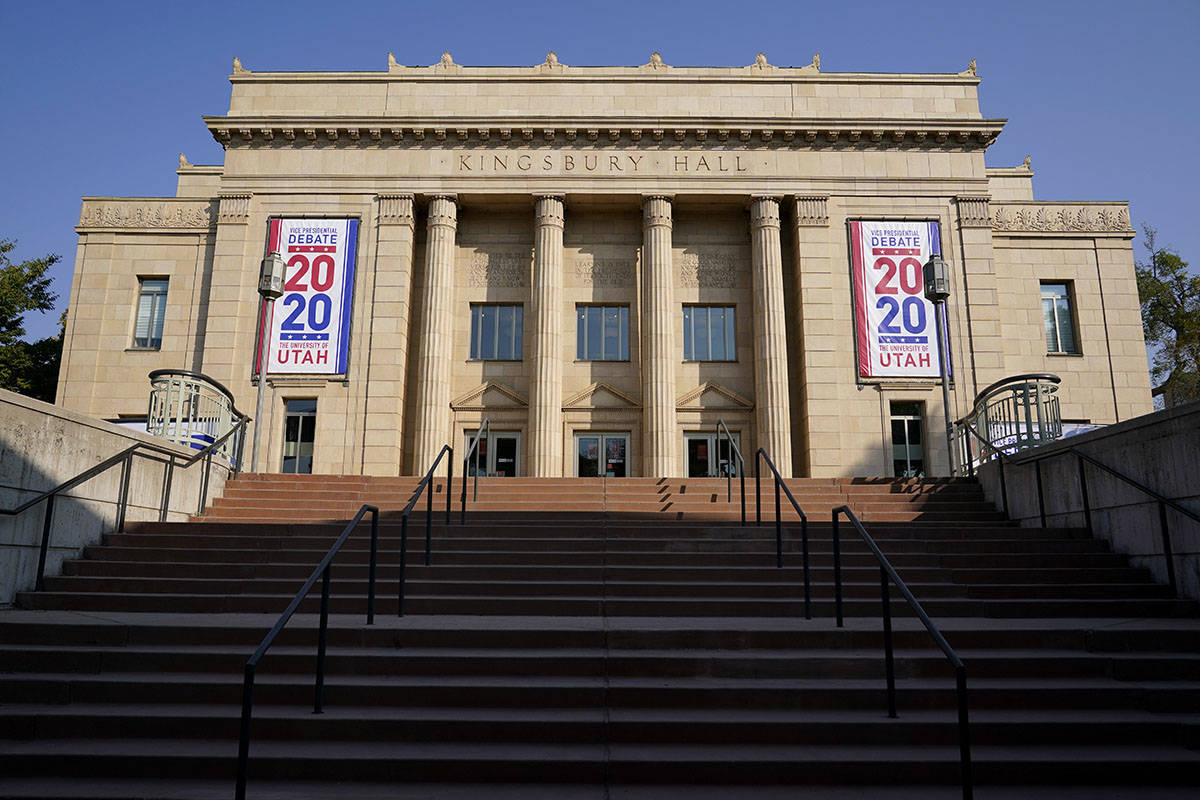 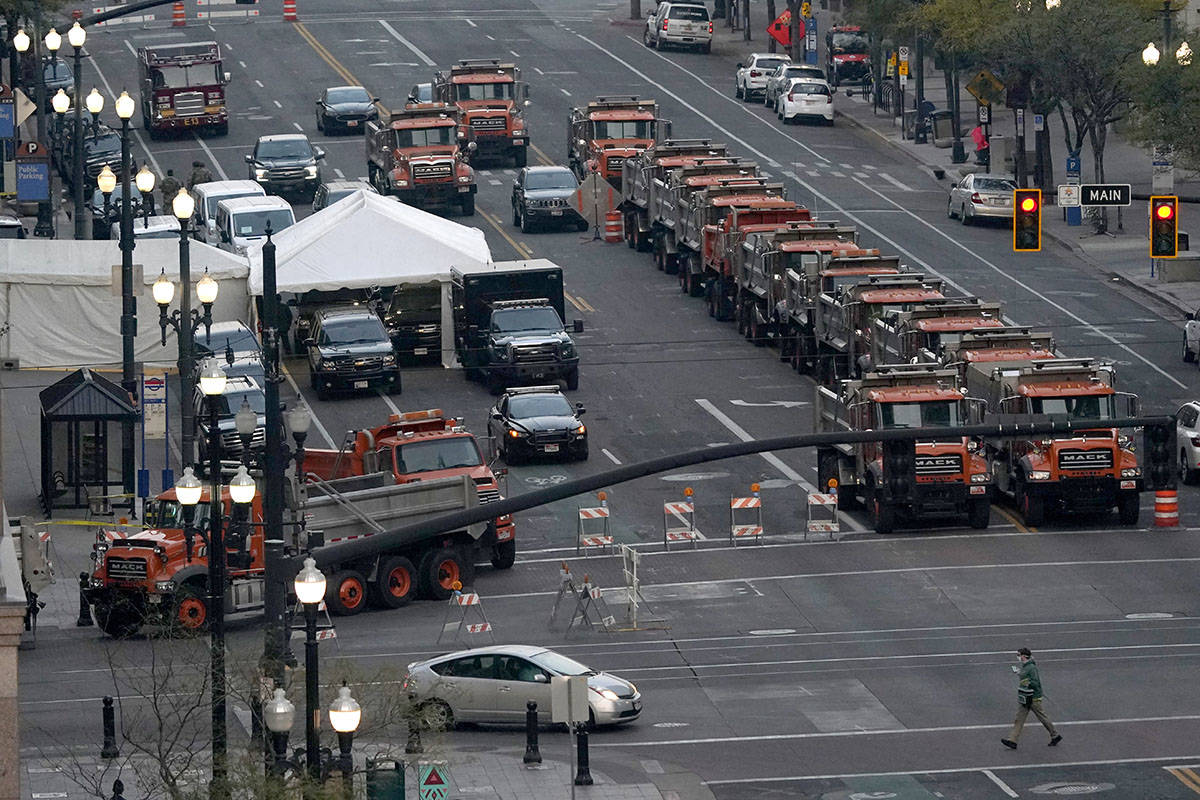 A perimeter is set by heavy dump trucks around a hotel in downtown Salt Lake City, the site of the vice presidential debate at the University of Utah, Wednesday, Oct. 7, 2020. Vice President Mike Pence and Democratic vice presidential candidate, Sen. Kamala Harris, D-Calif., will participate in the debate Wednesday night. (AP Photo/Julio Cortez) 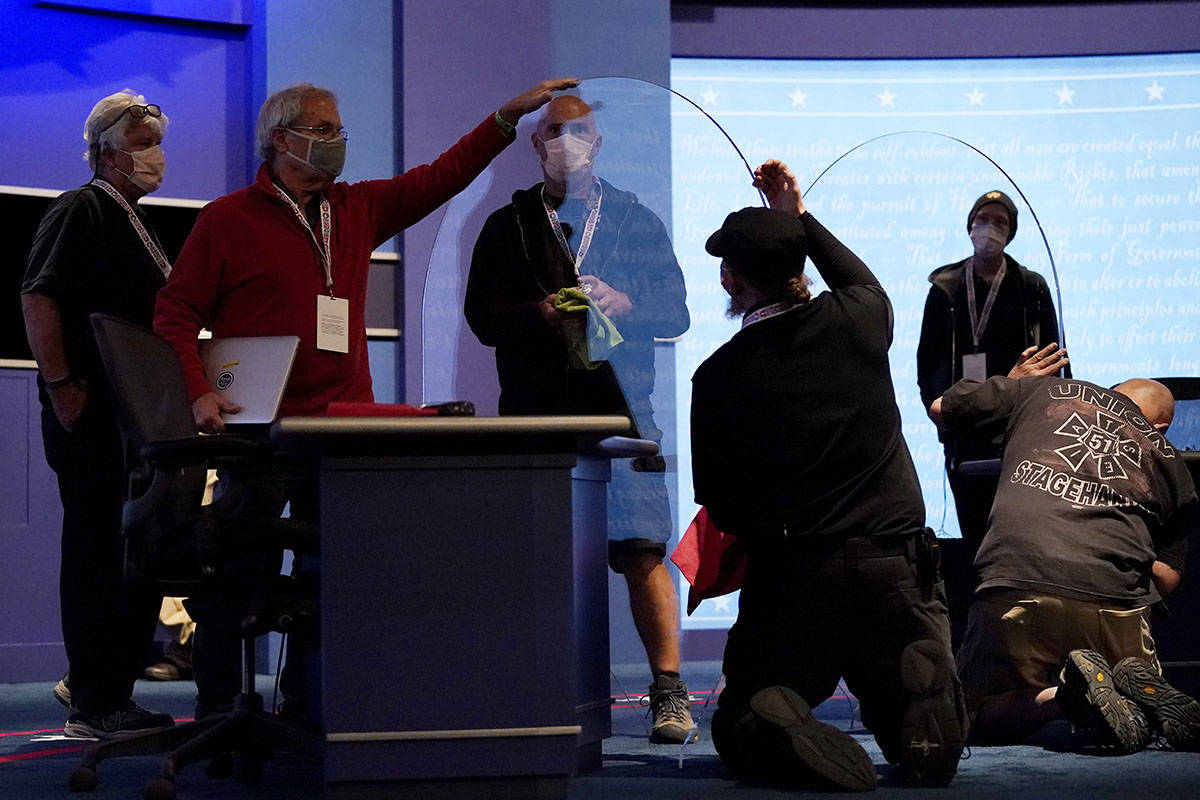 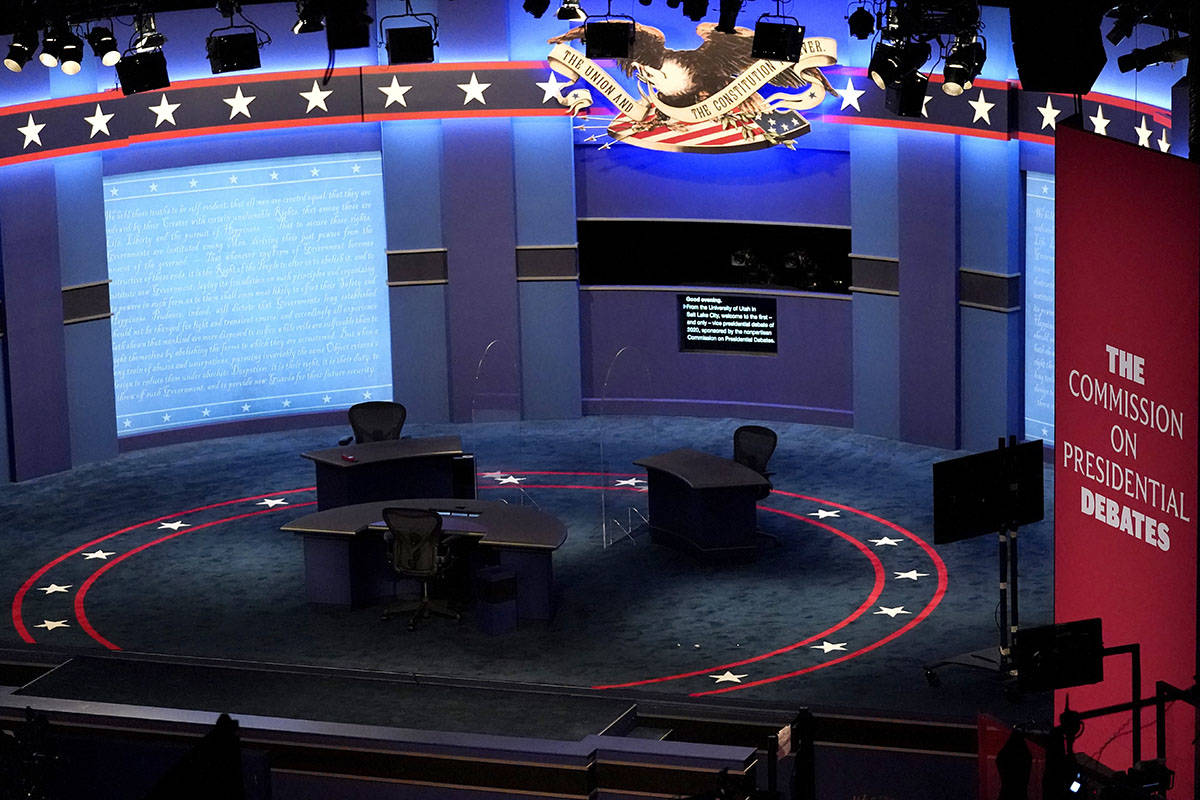 The stage is set with glass between seats ahead of the vice presidential debate at the University of Utah, Wednesday, Oct. 7, 2020, in Salt Lake City. Vice President Mike Pence and Democratic vice presidential candidate, Sen. Kamala Harris, D-Calif., will participate in the debate Wednesday night. (AP Photo/Julio Cortez) 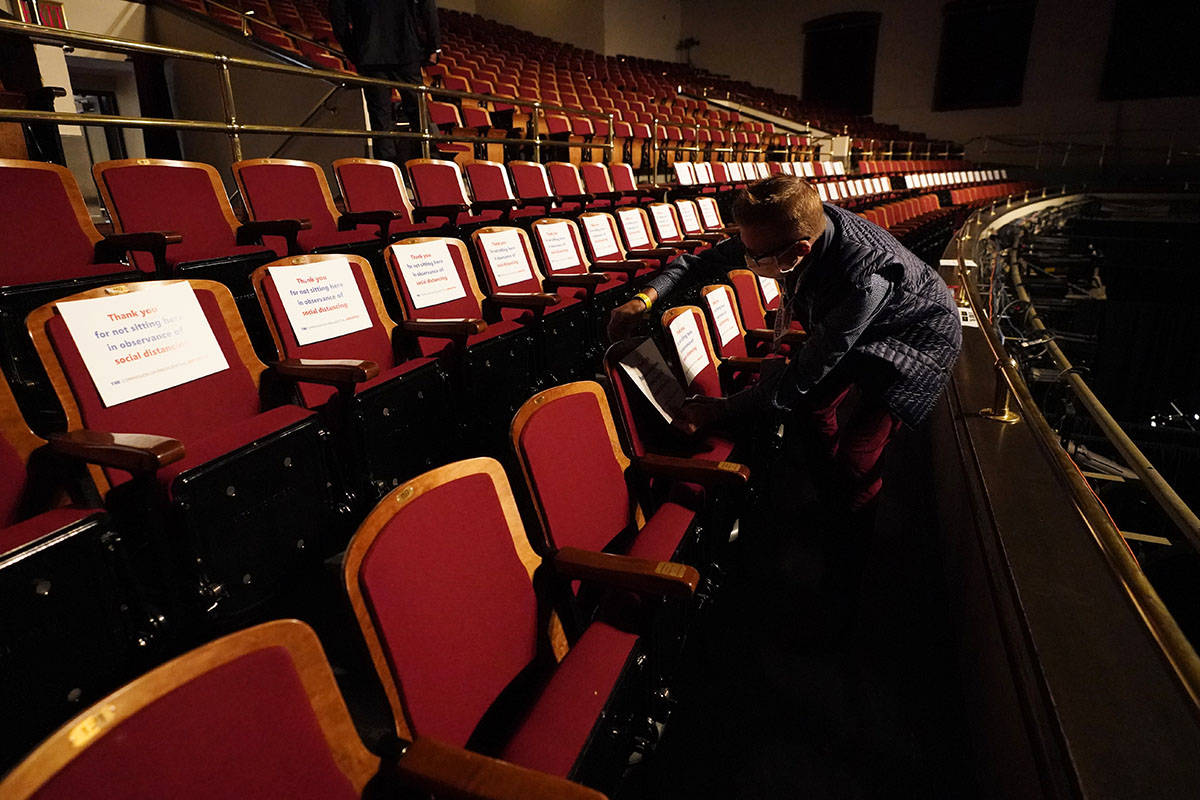 A member of the production staff puts labels on seats in an effort to keep seats socially distanced ahead of the vice presidential debate at the University of Utah, Wednesday, Oct. 7, 2020, in Salt Lake City. Vice President Mike Pence and Democratic vice presidential candidate, Sen. Kamala Harris, D-Calif., will participate in the debate Wednesday night. (AP Photo/Julio Cortez) 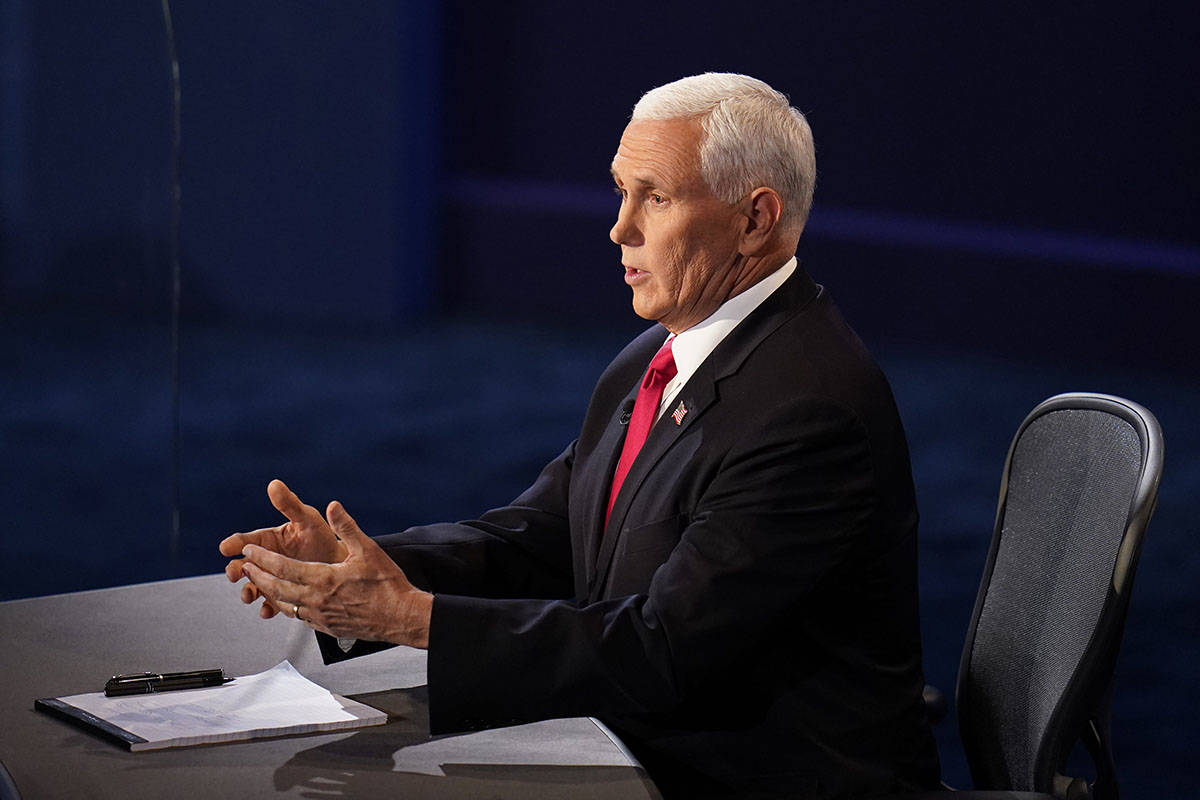 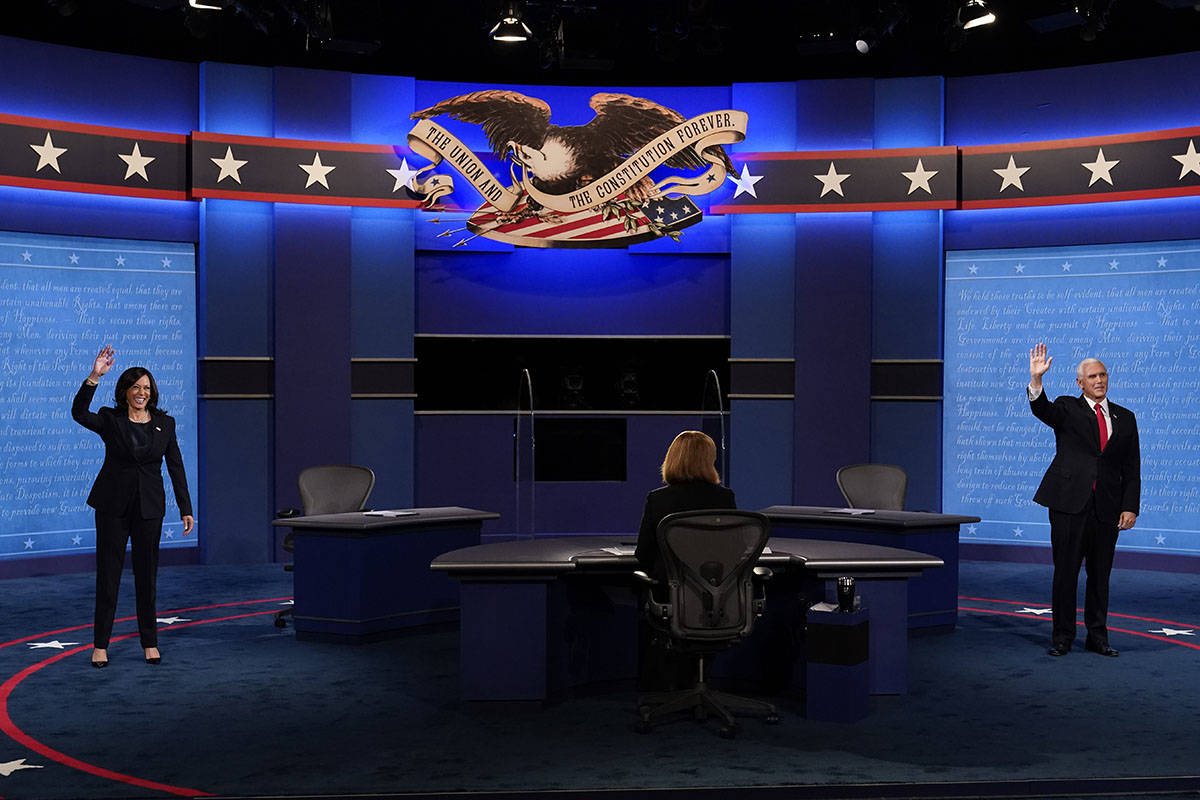 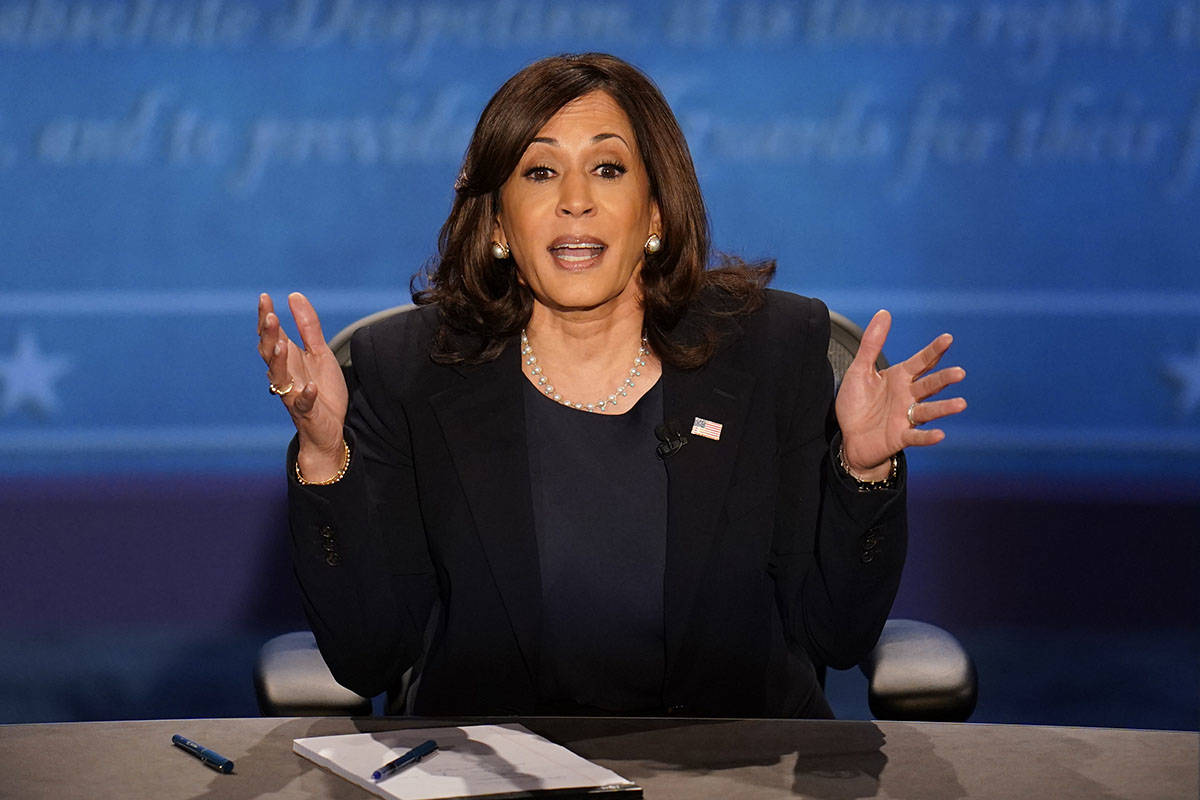 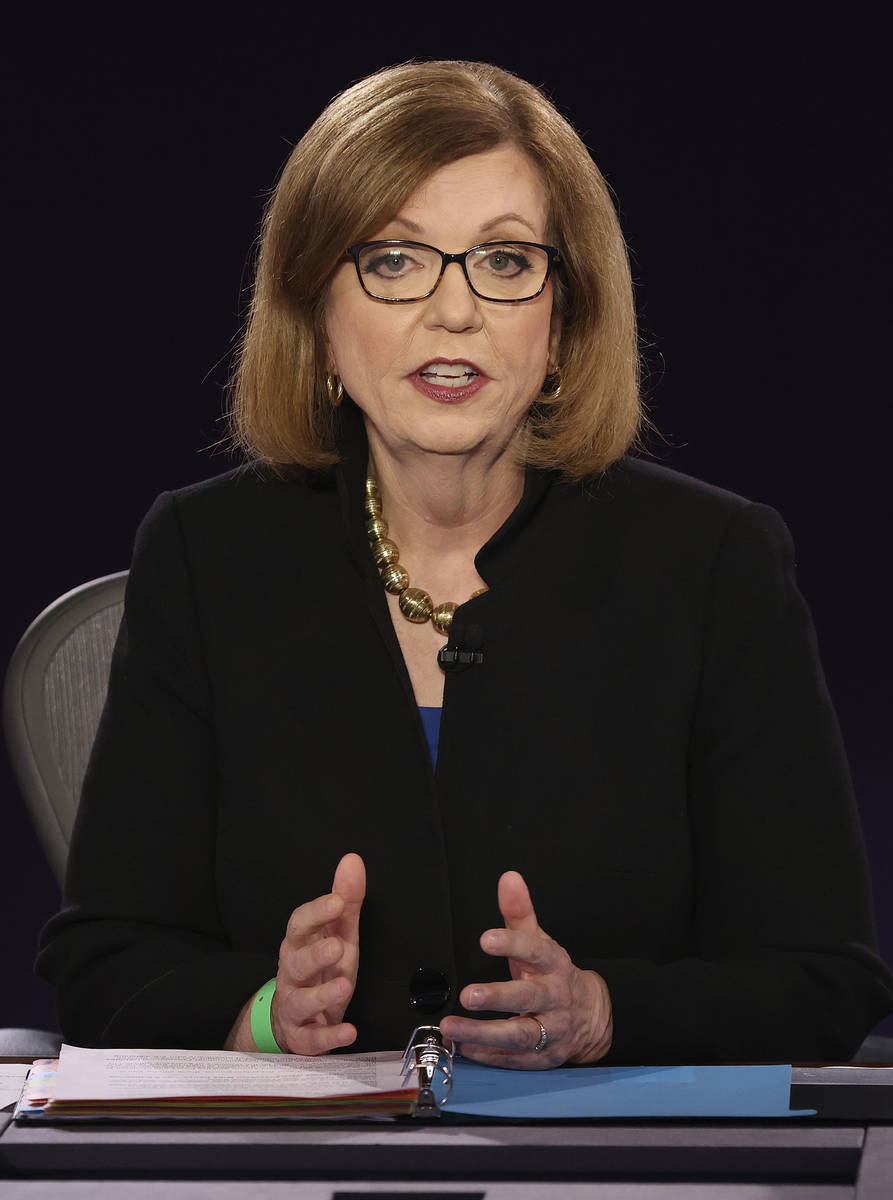 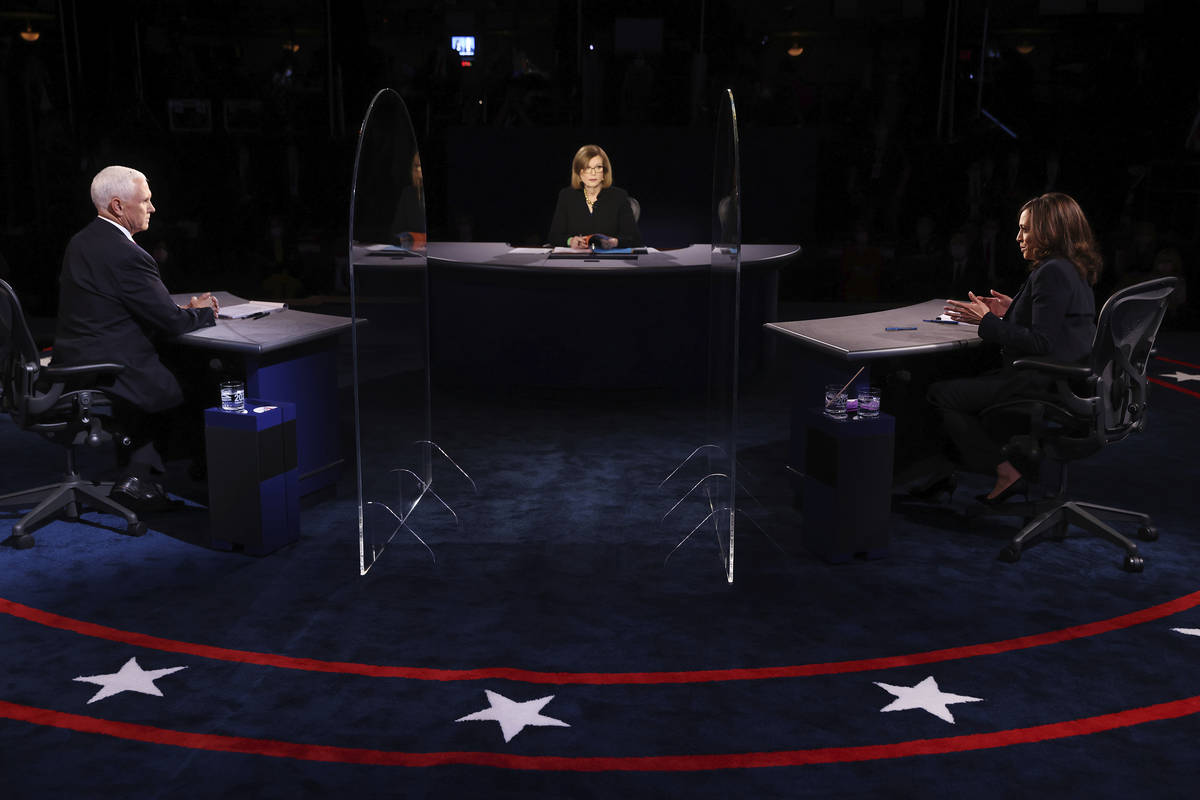 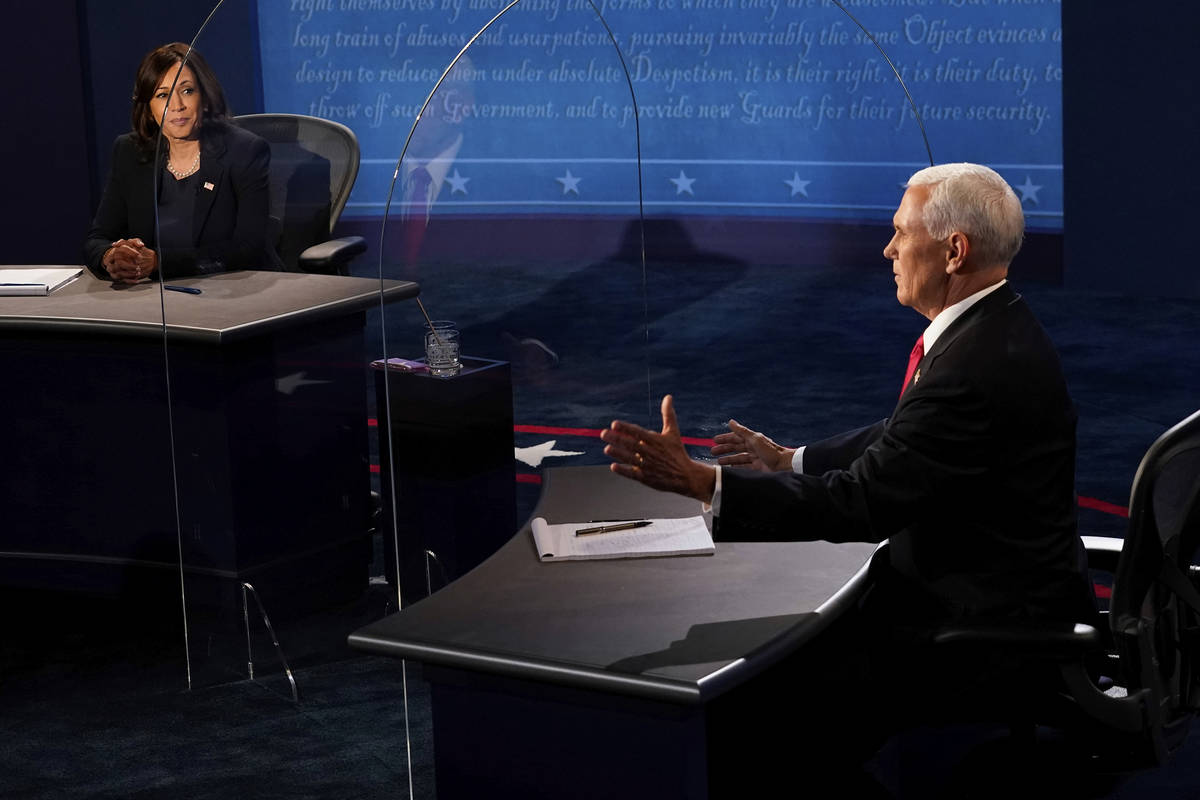 It was a spirited, substantive and civil debate. Both participants made sharp points at the other’s expense, which put the evening in stark contrast to the first presidential debate.

At Harris’ request, the Commission on Presidential Debates placed the two candidates 12 feet apart with Plexiglas partitions between them to prevent the spread of the coronavirus.

The moderator, USA Today Washington Bureau Chief Susan Page, warned the University of Utah audience that they were required to wear masks and would be escorted out if they refused. It was more difficult keeping the candidates from talking over their allotted time, but otherwise each was pointedly polite to the other.

Page’s first questions were about the coronavirus — the Trump White House’s handling of it and what Harris and Democratic presidential candidate Joe Biden would do differently. Pence hailed the administration’s decision to ban travel from China in January and Operation Warp Speed’s effort to produce a vaccine in record time and chided Harris for not recognizing the accomplishments.

Harris faulted President Donald Trump for knowing about the dangers of the coronavirus in late January but not leveling with the American people. “They knew it and they covered it up,” she charged.

Harris did not roll out an alternative plan. Pence responded by saying the Biden plan seems lifted from the White House Coronavirus Task Force playbook. “It looks a little bit like plagiarism, which is something Joe Biden knows a little bit about,” he said.

Khachigian declared Pence the winner for being calm and eschewing references to the Pew Research Center, as Harris did.

But Dan Newman, former adviser to Harris, said she was “honest and real, authentic and reasonable and compassionate.”

Each candidate had a preferred statistic. Harris frequently referred to the 210,000 Americans who have died during the coronavirus pandemic, as she faulted Trump’s response to the pandemic as inadequate.

For his part, Pence frequently spoke of former Vice President Biden’s 47 years of public service during which, Pence suggested, many of the country’s economic problems festered.

The debate heated up as it went on. At one point, Pence pressed Harris to answer whether Biden, if elected, would pack the U.S. Supreme Court if the Senate confirms Amy Coney Barrett, Trump’s third choice to serve on the top court. Harris refused to answer.

Harris noted that of the 50-odd appellate court judges whom Trump had appointed, “not one is Black.” She also brought up Trump’s remarks on Charlottesville, Virginia, in 2017.

As the conversation moved to issues of racial justice in the wake of George Floyd’s death, Harris boasted of her participation in “peaceful protests.”

Pence responded that there was “no excuse for the rioting and looting that followed” Floyd’s death and that of other African Americans at the hands of police. America, Pence argued, is not “systemically racist.”

The most spirited exchanges involved national security and energy policy.

Pence had invited the parents of Kayla Mueller, a humanitarian aid worker held hostage then executed in 2015 by Islamic State despite the family’s appeal to President Barack Obama to save their daughter.

The moment provided an opportunity for Pence to credit Trump for ordering an attack that killed Iranian general Qassem Soleimani and fault Obama for sending $1.8 billion to Iran, “the leading state sponsor of terrorism,” as part of the international pact Obama brokered.

Harris looked toward the Mueller family and said that Biden and she were sorry for their awful loss. She then defended the global pact Obama reached with Iran.

Harris also faulted Trump for not challenging Russian President Vladimir Putin about disputed reports that Russia offered bounties for the heads of U.S. troops. “Joe Biden,” she said, “would never do that.”

On Thursday, Pence will speak at a 10 a.m. rally at Boulder City Airport ahead of an afternoon rally in Peoria, Arizona.

During a call with reporters before the debate, Nevada state Sen. Yvanna Cancela questioned whether Pence should visit after 1,600 Nevadans died from the virus. “It didn’t have to be that bad,” she said of the state’s death toll and economic damage.

Cancela recalled Trump’s remarks to the Review-Journal before a rally in Henderson last month, in which he appeared unconcerned about any health risk to attendees. Pence, she argued, was following the same playbook by holding a rally in Boulder City.

According to his campaign, Biden will campaign in person in Las Vegas on Friday, but no details have been released. Harris’ husband, Doug Emhoff, plans a Northern Nevada appearance Thursday at Washoe County Democratic Party headquarters in Reno, according to The Associated Press.