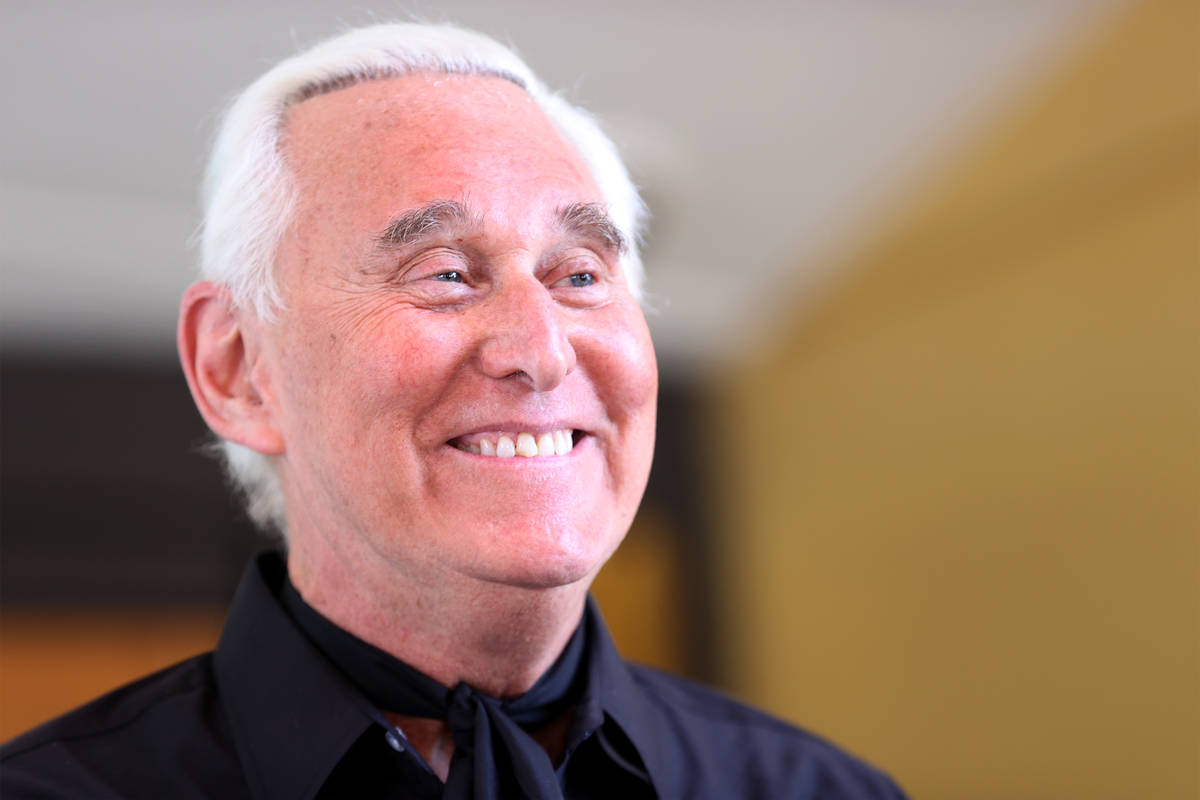 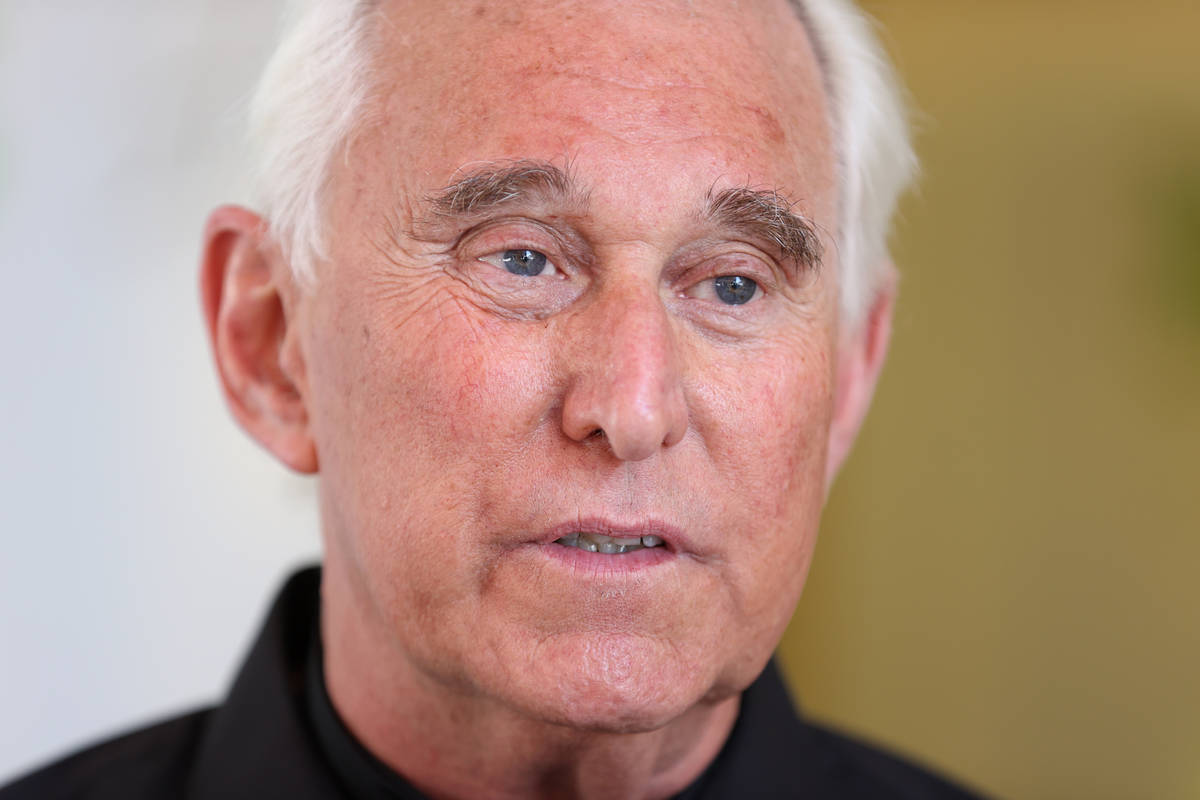 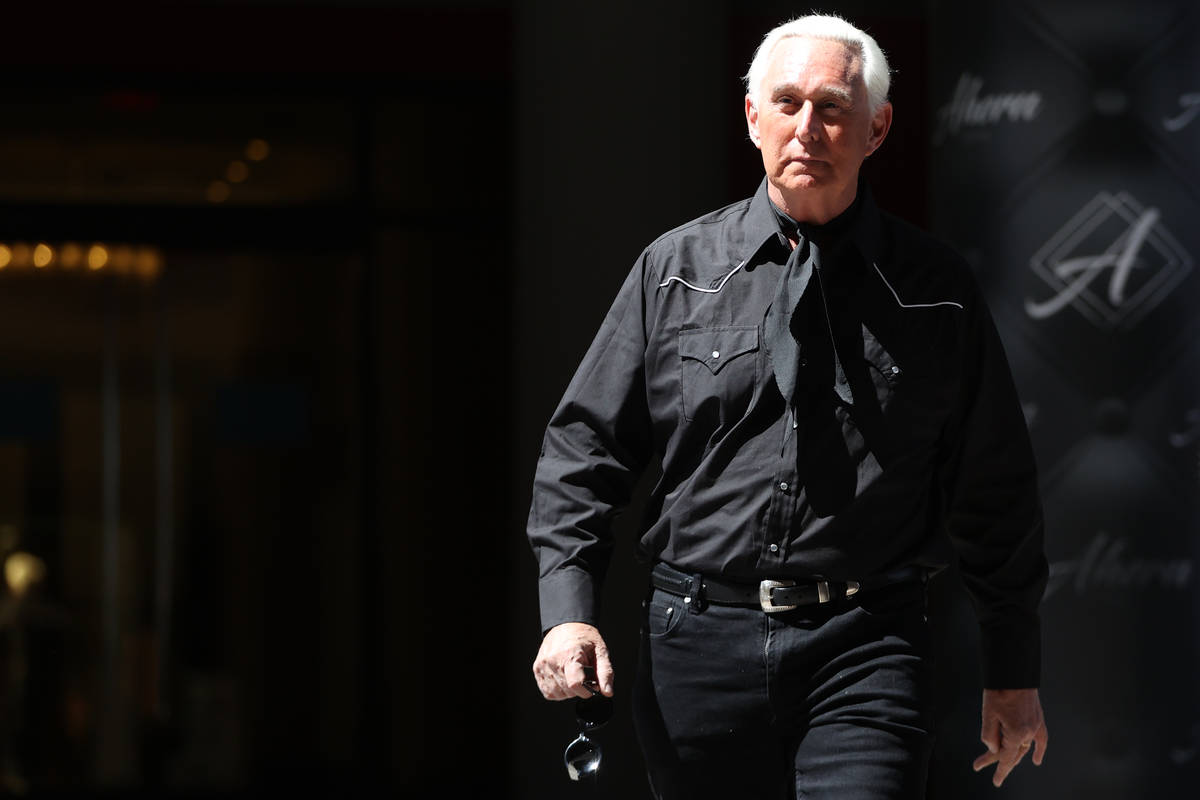 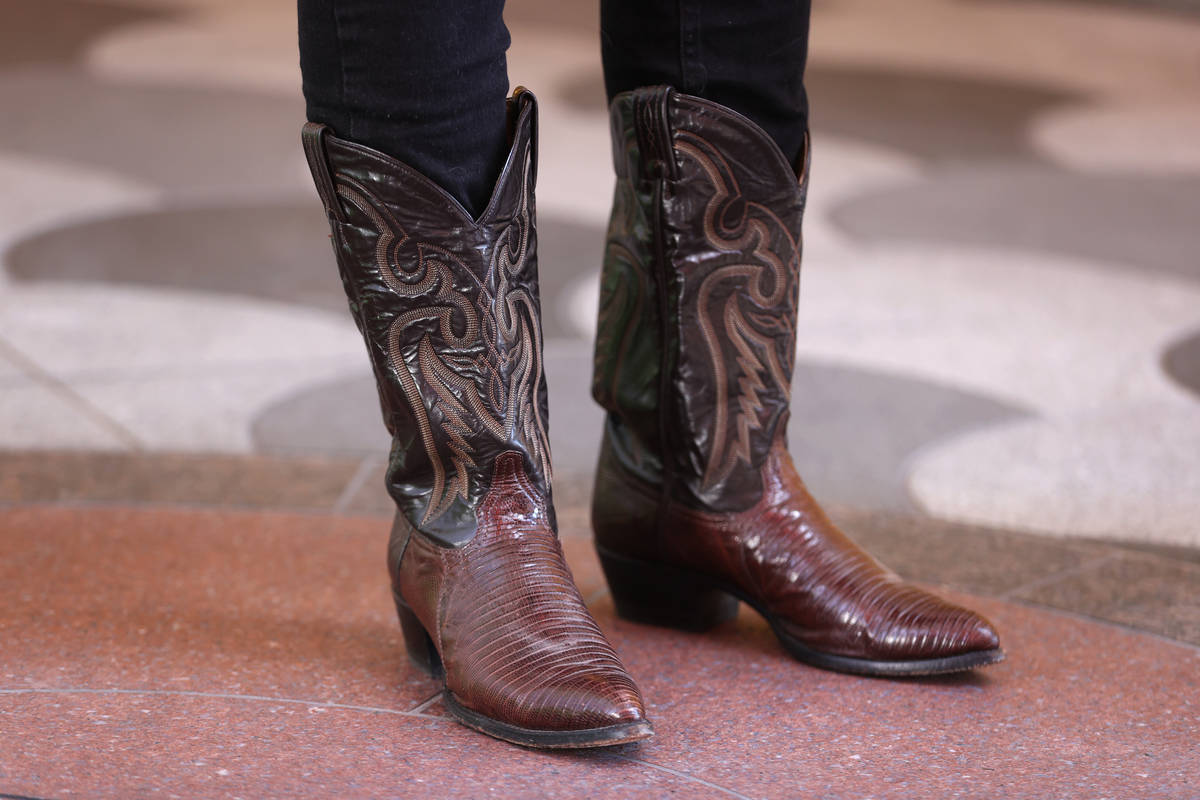 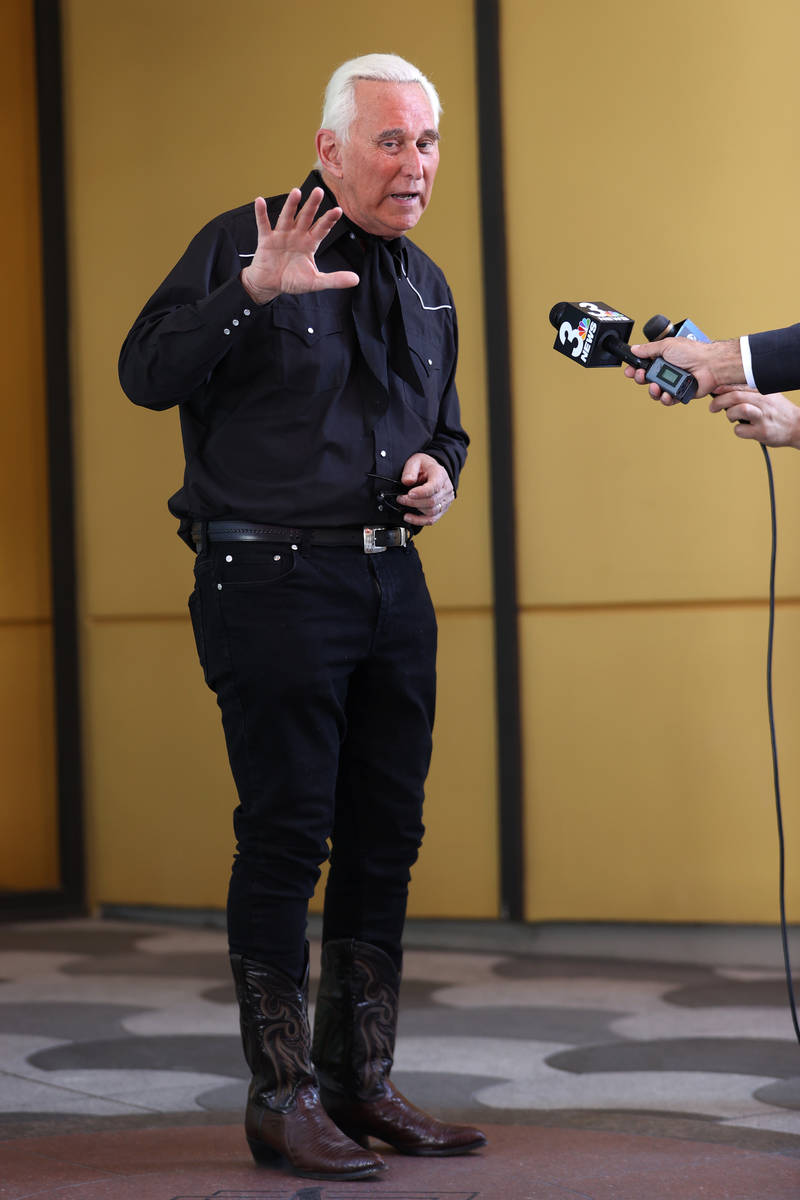 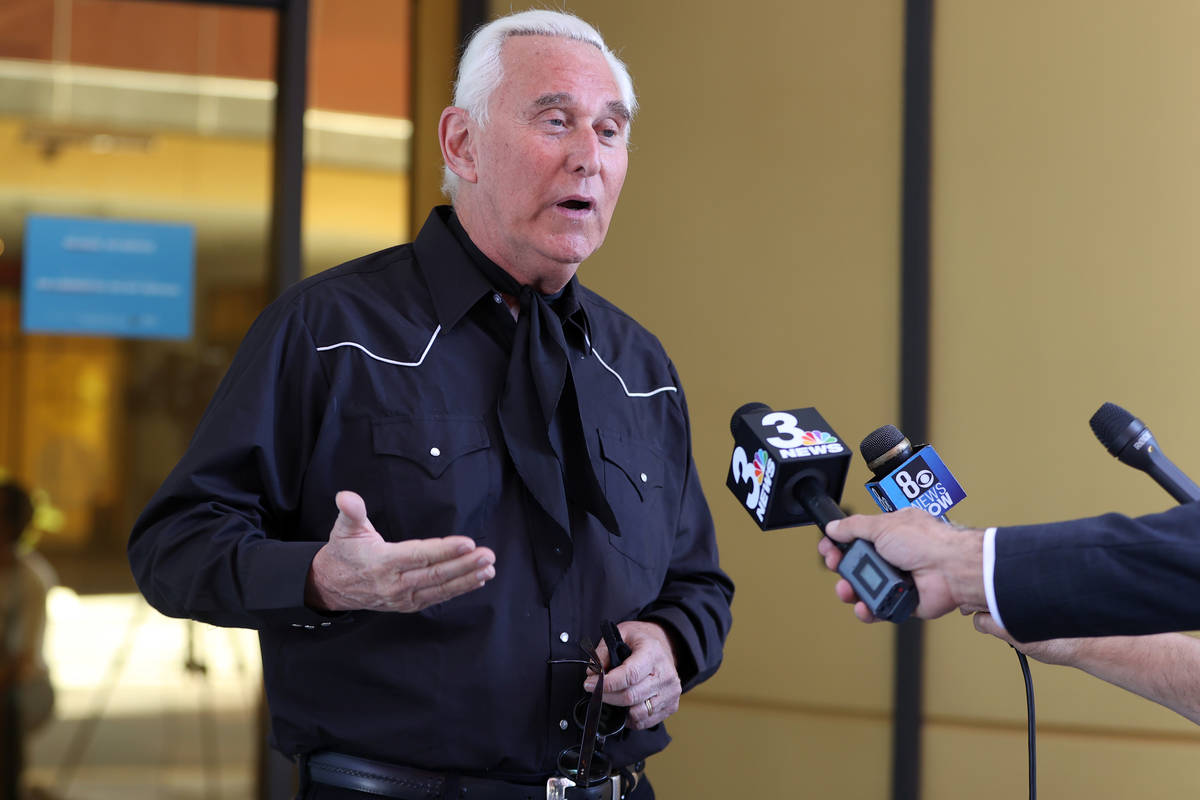 Although longtime political ally President Donald Trump is making campaign stops in Las Vegas and other Nevada cities on the same weekend, Stone told a small group of news media gathered outside the Ahern Hotel that he has no involvement in Trump’s campaign and no plans to see his old friend.

“I’ve been a friend of the president’s for 40 years,” said Stone, decked from the neck down in black western wear with matching cowboy boots. “I’m very, very grateful to him for his courageous act of justice and mercy in commuting my sentence because I was the subject of a political prosecution.”

As part of special counsel Robert Mueller’s investigation into foreign interference in the 2016 election, Stone was convicted in November of seven felonies, including witness tampering. Trump commuted Stone’s 40-month sentence in July but stopped short of giving him a full pardon. Stone dropped his appeal of the convictions last month.

Stone said Saturday that attempts to fight his prosecution, various lawsuits against him and a 16-month gag order that prevented him from working led to the loss of his house and savings. He said that the Mueller investigation turned up no real evidence of any collusion between him and Russia, again stressing that he believes he was prosecuted for political reasons.

The proceeds from the two fundraising events, one for small-dollar donors at 2 p.m. and a 6 p.m. VIP dinner for those willing to donate $500 or more, will go directly to his legal defense fund. The events were not open to news media or the public, Ahern security staff said.

The Ahern, which was fined $11,000 by the state of Nevada for violating 50-person gathering rules to host a Trump campaign event in August, had set up exactly 50 chairs at 10 tables surrounding a small stage as of noon Saturday.

Stone officially left Trump’s campaign in 2015. He said he has not spoken to the president since his sentence commutation and does not intend to see him this weekend or attend any of his Sunday campaign events.

“I’m trying to arrange for the young people who work for me to go to the rally because they’ve never been,” Stone said. “I’ve been to many of them, so I don’t need to go. I’ll be watching on TV.”

“I have no intention of coordinating my activities with the formal campaign,” he said. “But I do think there are perfectly legal, totally reportable, independent things that can be done to help the president. And I’m thinking about some of those.”

Stone said Trump must win re-election in order to save the country from “hurtling over the edge of the cliff to globalism.”

He praised Trump’s response to the coronavirus, saying the president’s critics are attempting to politicize the pandemic.

Trump “erred on the side of caution” in shutting down his “signature achievement,” the economy, but Stone said the actual case numbers have not justified the response shown in Nevada and beyond.

“Now, if you look at the (Centers for Disease Control and Prevention) numbers (the) weekend before last, it’s very hard to reconcile them with the public panic that people like Gov. (Steve) Sisolak have engendered,” Stone said.

According to tracking by Johns Hopkins University of Medicine, more than 193,000 people in the U.S. had died from COVID-19 as of Saturday.

Asked to weigh in on the president’s chances in Nevada, Stone instead said “there are a lot of questions” regarding the state’s election system.

He criticized recent changes in Nevada election law that require every voter to be mailed a ballot, saying he spoke to a man Friday who had received four ballots, one for himself and three for previous tenants who no longer lived at his home.

Stone said he plans to use his speaking engagements, interviews and a forthcoming book to push against what he says is a false narrative that he agreed not to speak out against the president during impeachment in exchange for the sentence commutation and other lies spread since his trial.