WASHINGTON — Senate Republicans are barreling toward a vote on health care reform despite tepid support from key lawmakers concerned about Medicaid cuts, which would shift costs to states like Nevada that expanded the program, according to an analysis released by a research group Tuesday.

GOP Senate leaders and the White House predicted a vote before the August recess on a newly crafted bill that would repeal the Affordable Care Act, commonly known as Obamacare, and replace it with a Republican alternative that would drop coverage mandates under the current law.

President Donald Trump, before meeting with House and Senate Republican leaders at the White House, said insurance carriers were fleeing the public exchanges created under the ACA.

“What’s clear is we have to act,” McConnell said.

The House passed its version of the bill in May, but many GOP senators said that legislation could not be passed in the upper legislative chamber.

“The Senate, I’m sure, will follow suit and get it across the finish line this summer,” Trump said.

The Center on Budget and Policy Priorities released new statistics Tuesday that showed the House bill would shift costs to states which expanded Medicaid under the ACA.

The House bill would cut Medicaid by $834 billion over 10 years, according to the nonpartisan Congressional Budget Office. It would restructure funding reimbursement formulas, which would be a 90-percent to 10-percent federal-state match in 2020.

Under current matching rules, Nevada would pay $113 million a year to cover those who received Medicaid under the expansion in 2021. If the rate of reimbursement was reduced, the state would pay $277 million, a 144 percent increase, according to CBPP, a nonpartisan think tank.

By 2023, CBPP estimates Nevada would pay $419 million a year, an increase of $288 million over what it would pay under existing rules.

Edwin Park, a CBPP researcher, said the House plan would require states “to sharply increase their spending, or end the expansion.”

The CBPP analysis also found that changes in the House bill would increase Medicaid out-of-pocket costs, making it difficult for those over 60 years old and poor to afford coverage.

Under the ACA, 31 states, including Nevada, and the District of Columbia, expanded Medicaid, which provided additional coverage for 11 million people, according to the Kaiser Family Foundation.

Republican senators from states that expanded Medicaid, including Dean Heller of Nevada, are working with colleagues to modify Medicaid changes as they write a Senate bill.

Nevada Gov. Brian Sandoval, a Republican and vice chairman of the National Governors Association, is urging Congress and the White House to maintain spending and coverage for those who became eligible for Medicaid under the expansion.

Heller said if the changes to Medicaid in the Senate bill are not sufficient for Republican governors, “I’m going to have a very difficult time voting for them.” 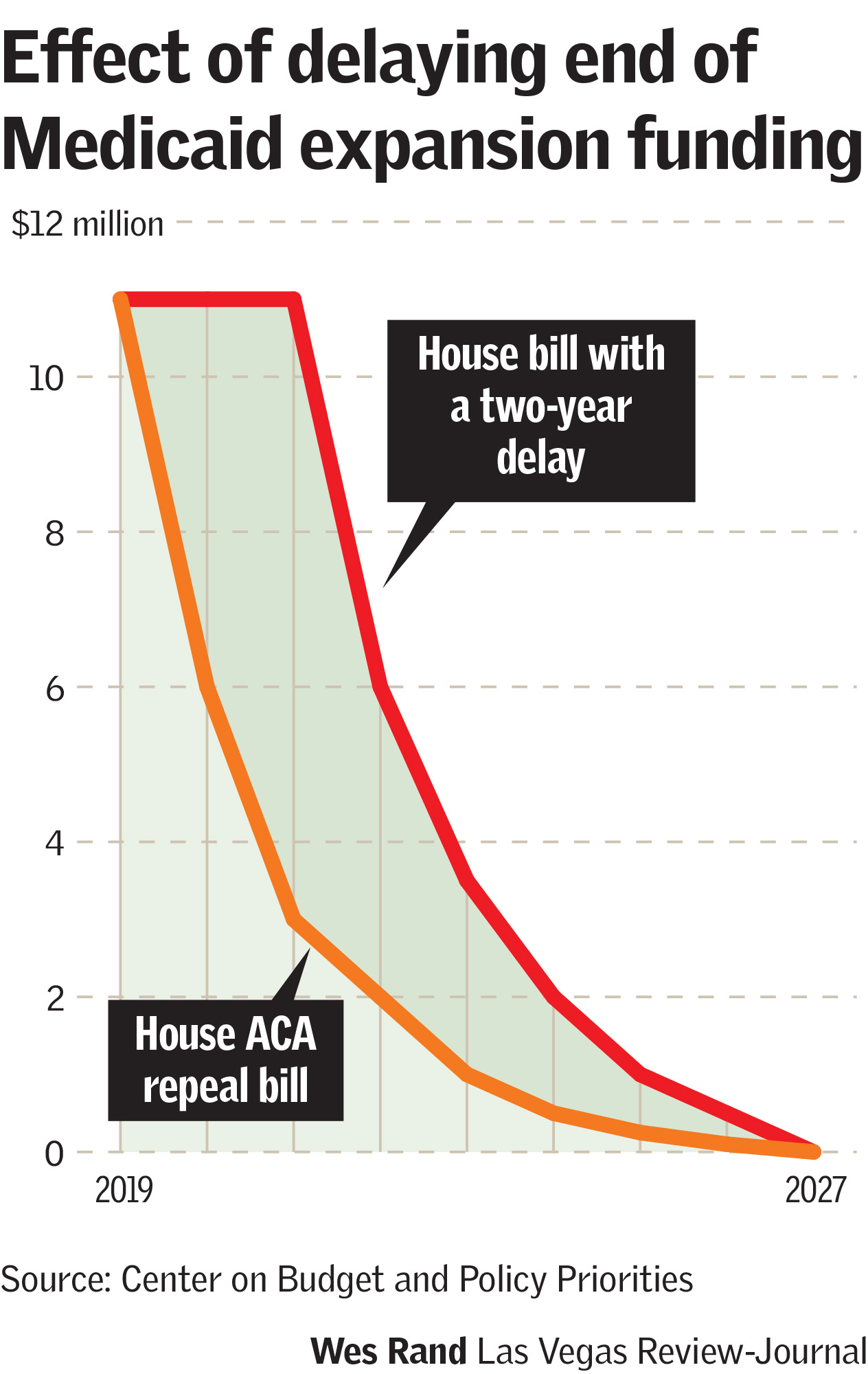 Several senators, including Sen. Jeff Flake, R-Ariz., have voiced doubts that the votes exist to pass a health care bill before August.

Republicans are trying to pass the bill under budget reconciliation terms that allow just a simple majority. But with a slim 52-48 majority, Republicans can afford to lose only a couple of GOP senators.

Democrats oppose repeal of the ACA and instead want changes to improve the current system.

Trump is pushing Congress to act on his legislative priorities, including health care and tax reform.

Trump met with key Republican leaders at the White House to discuss strategy about moving his initiatives without Democratic support in either chamber.

“We wish it weren’t this way, but the reality is that it will be a partisan exercise,” said Marc Short, the White House legislative affairs director.