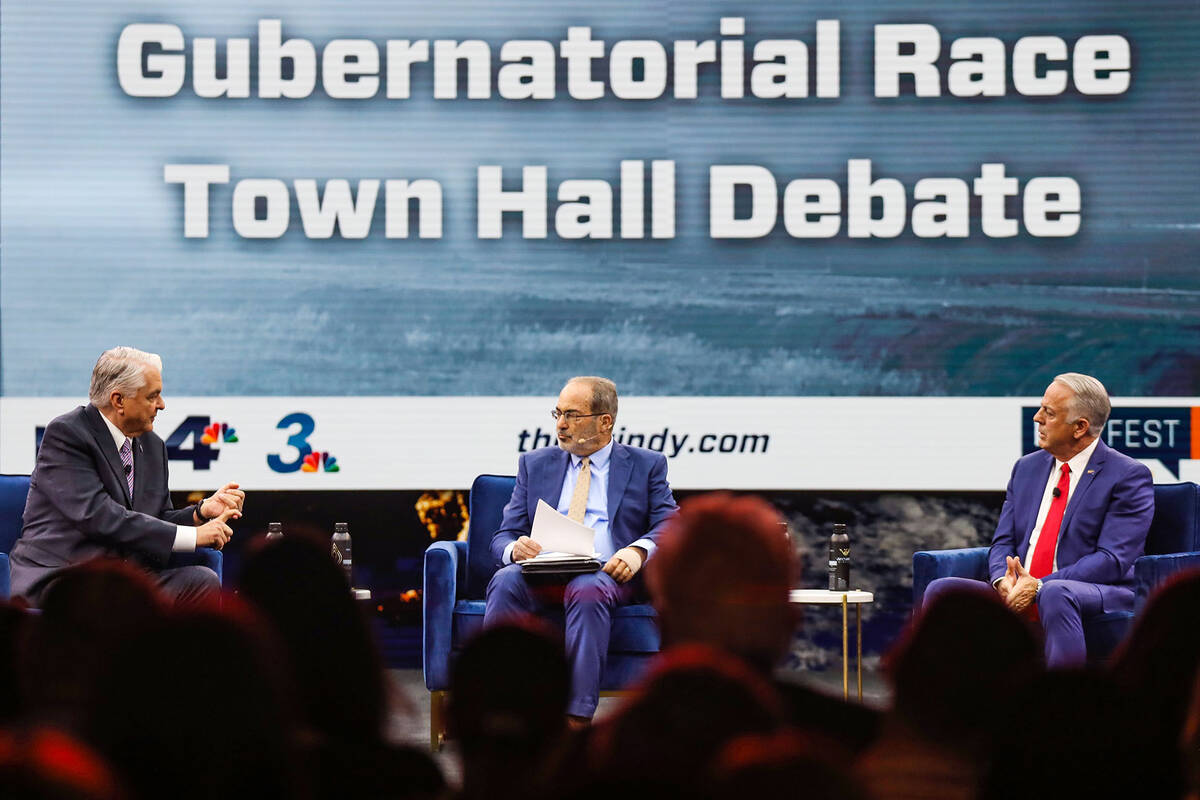 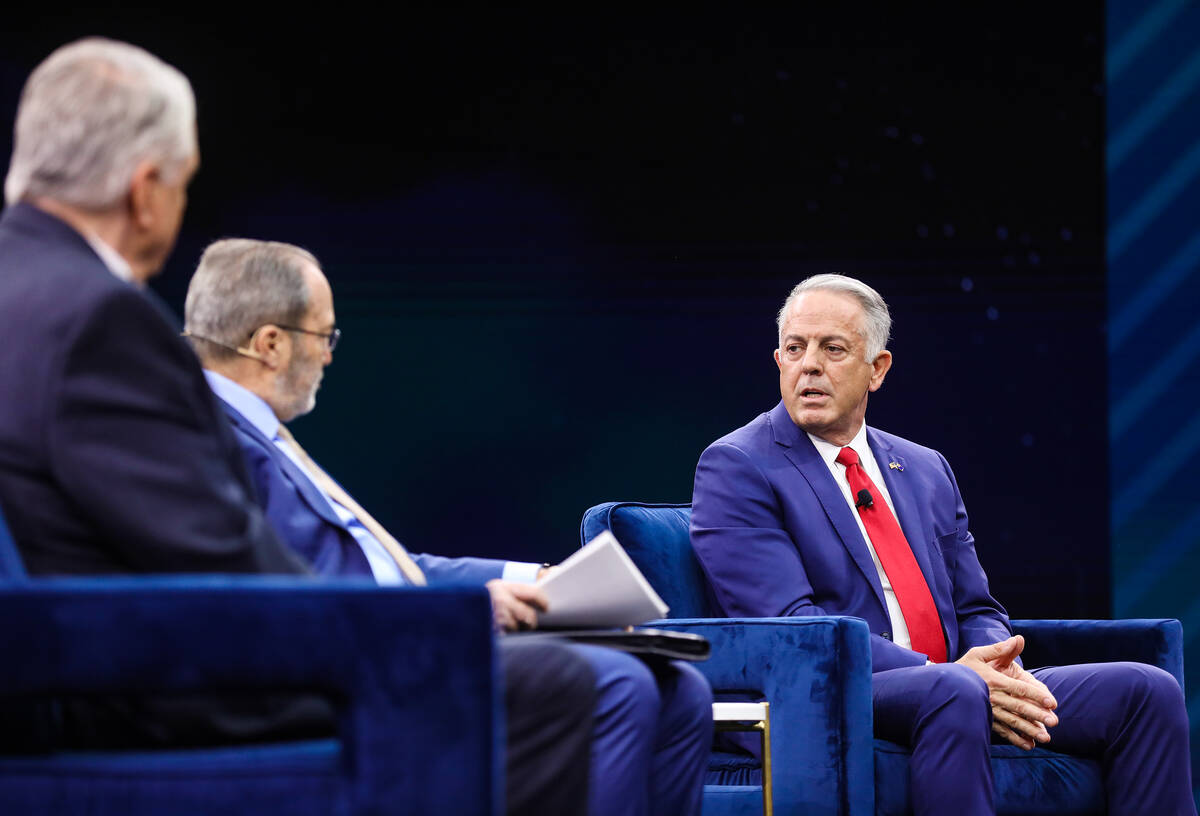 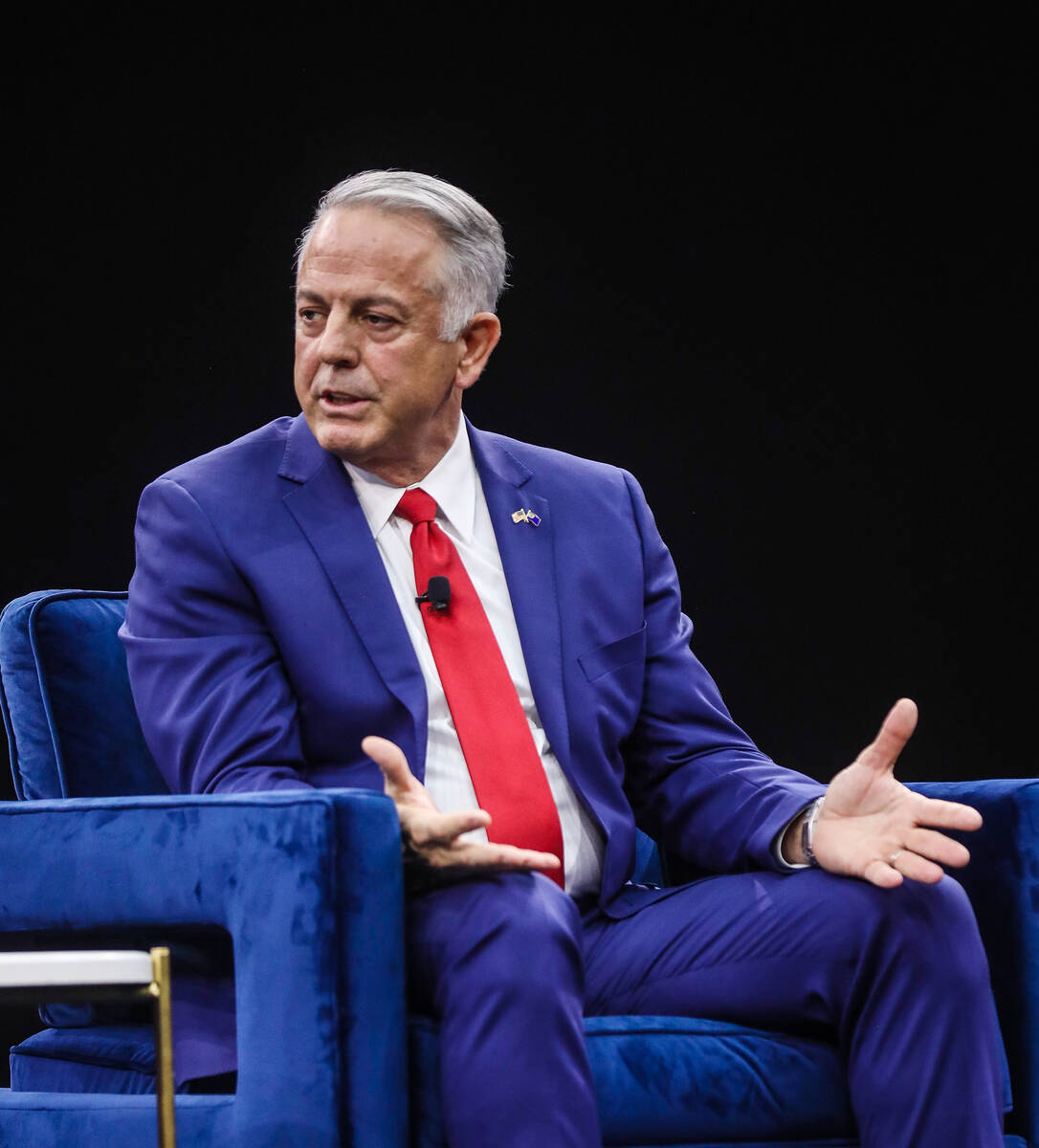 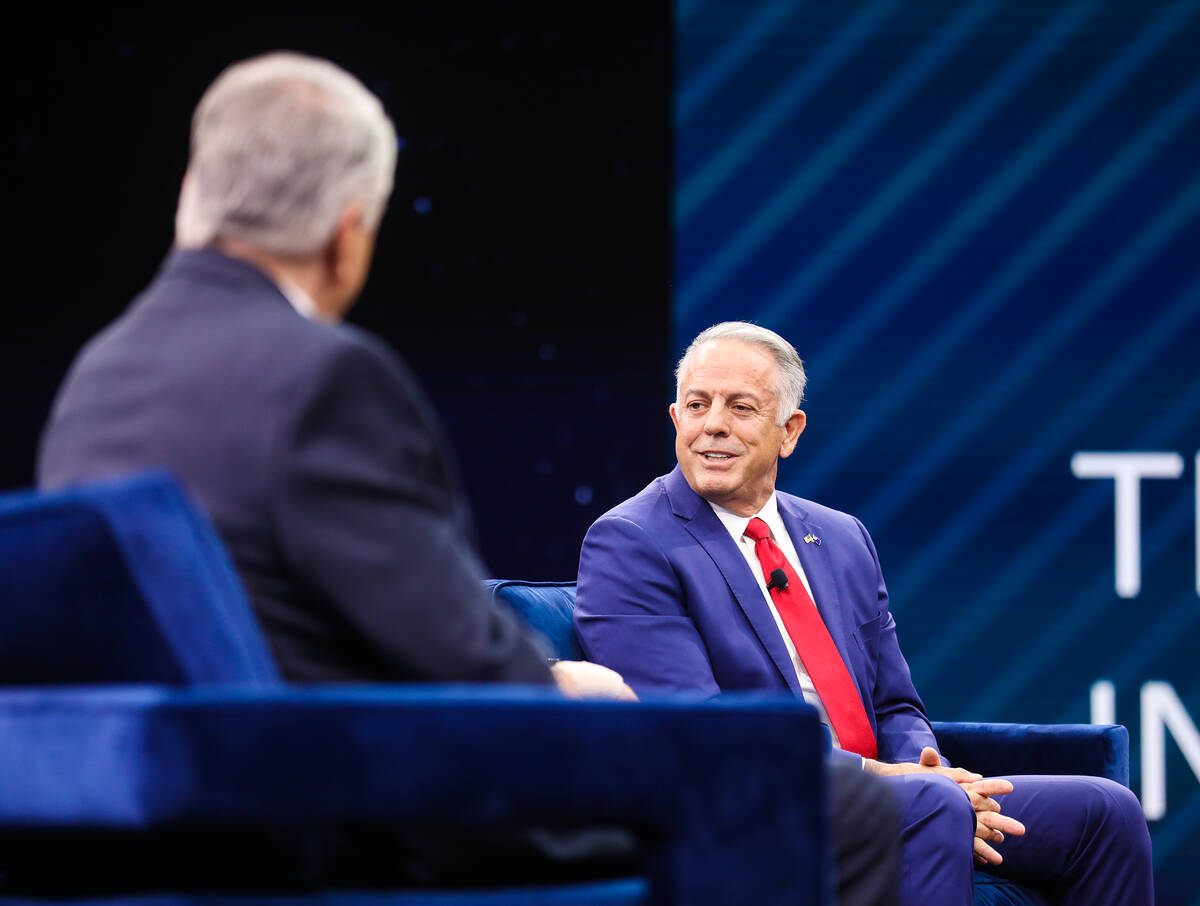 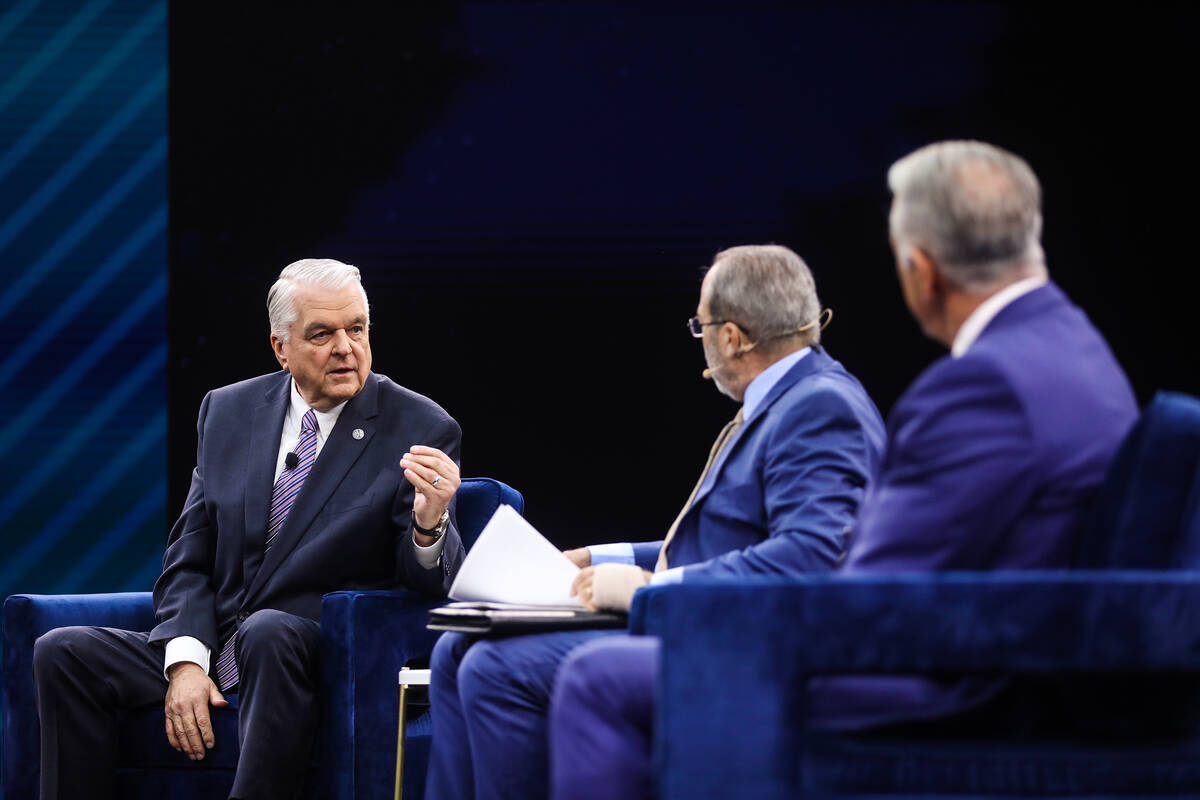 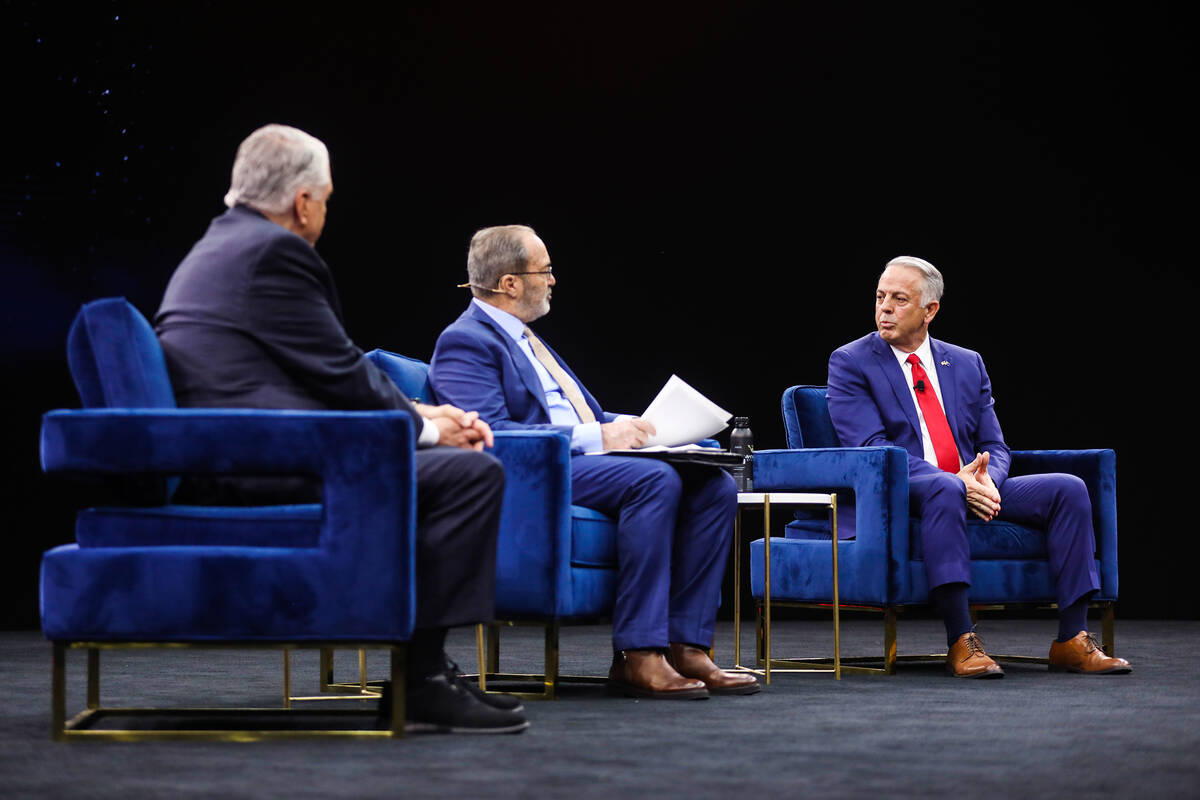 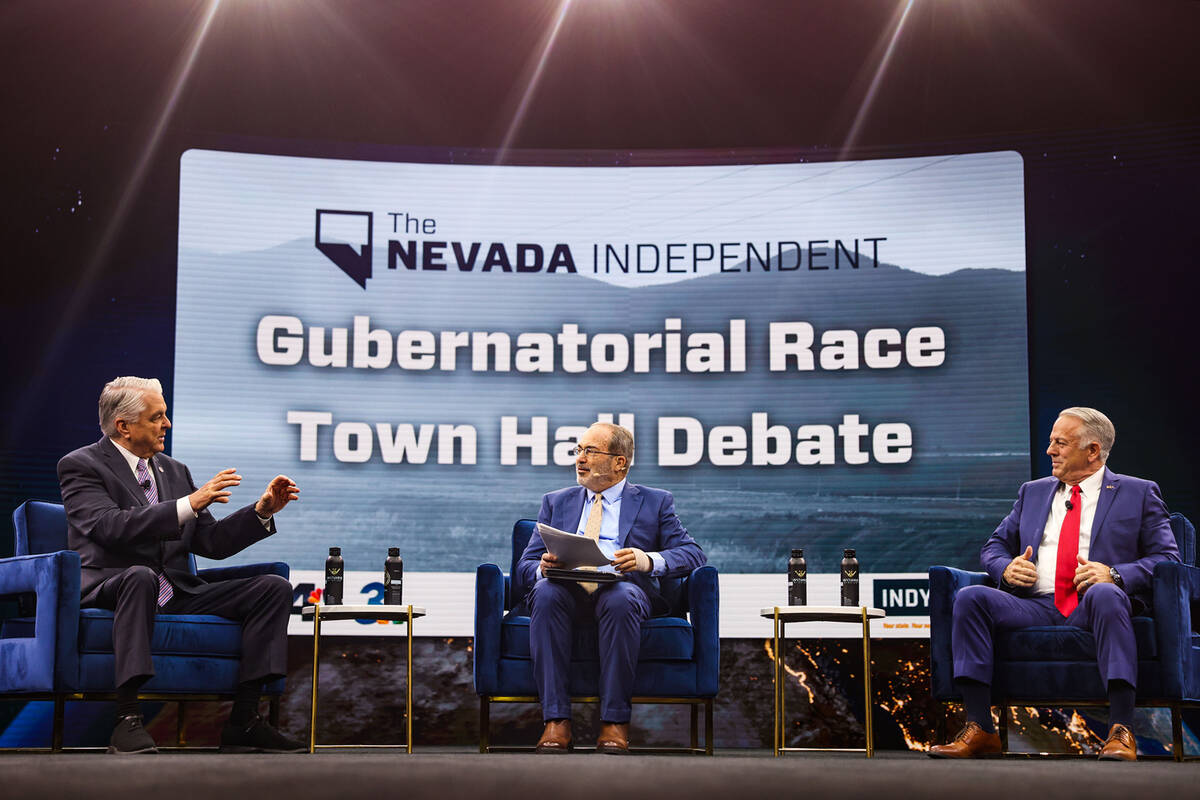 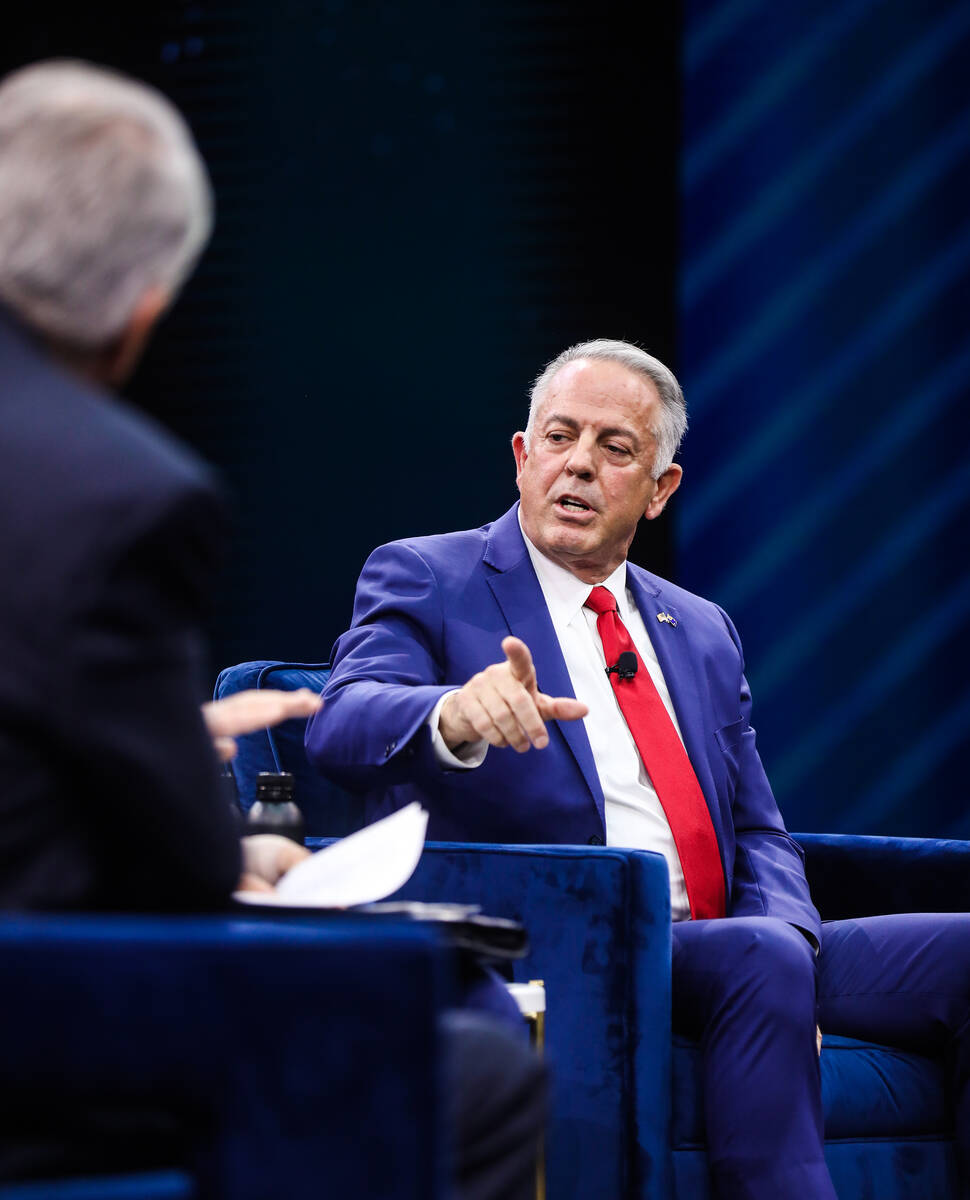 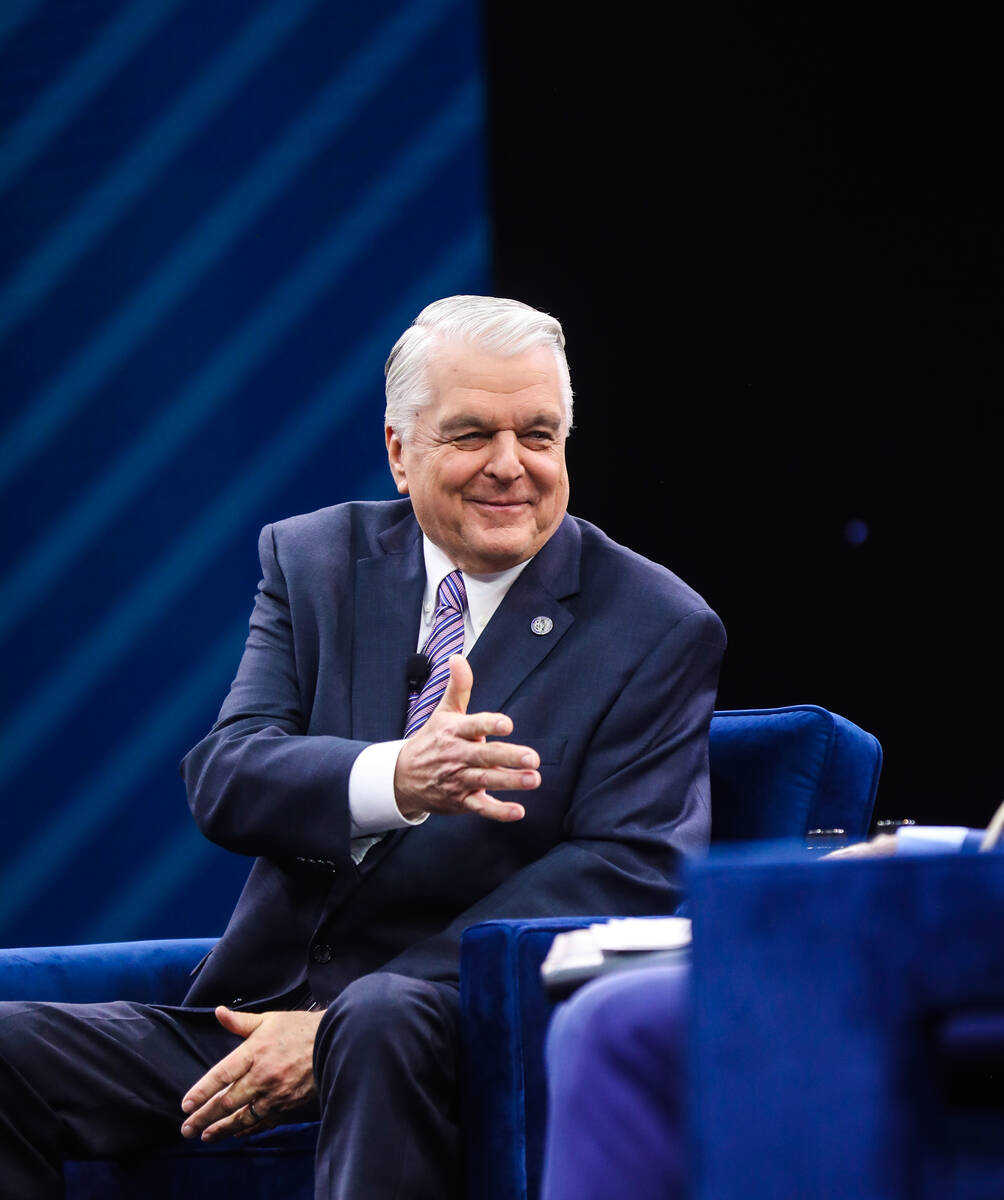 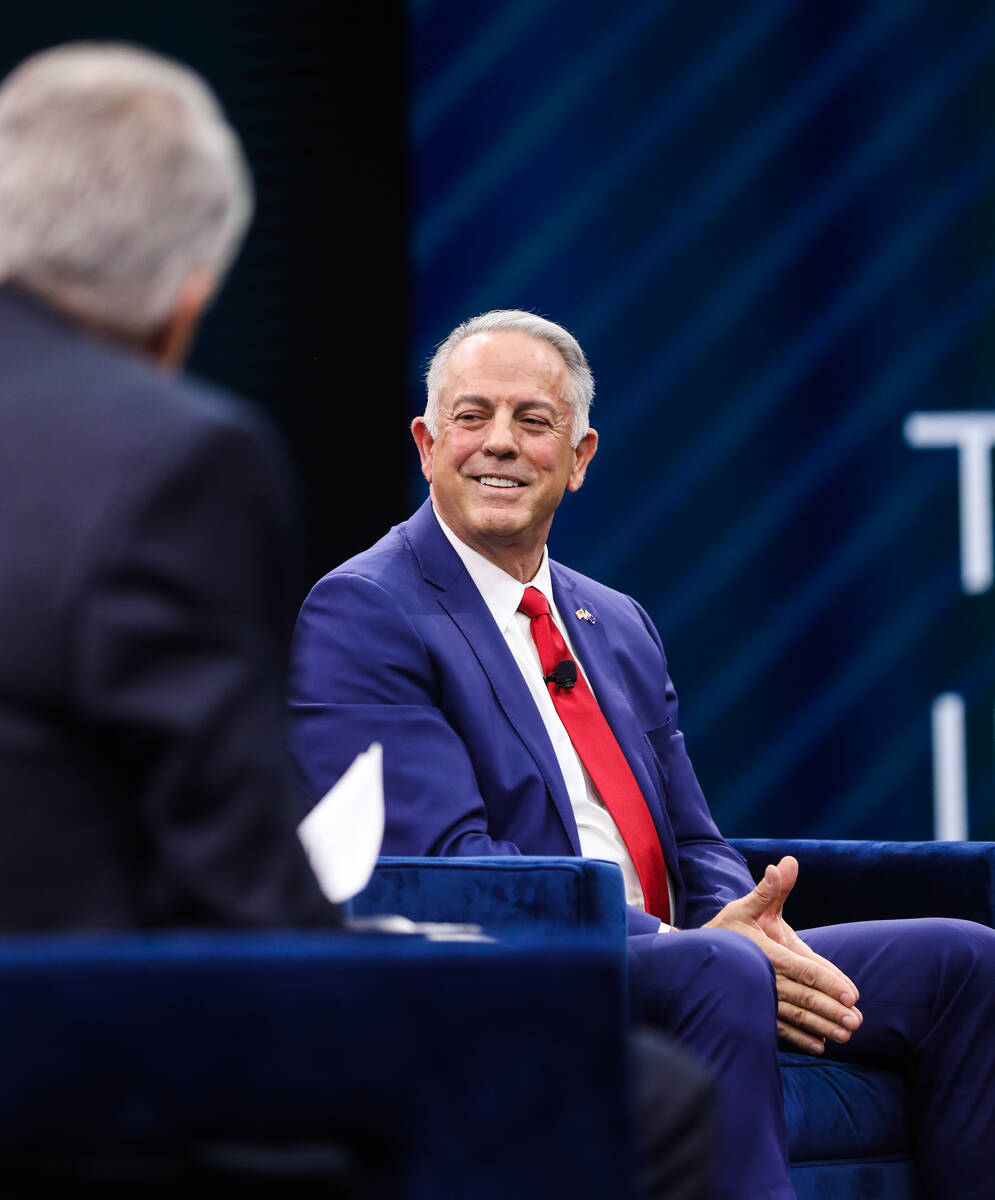 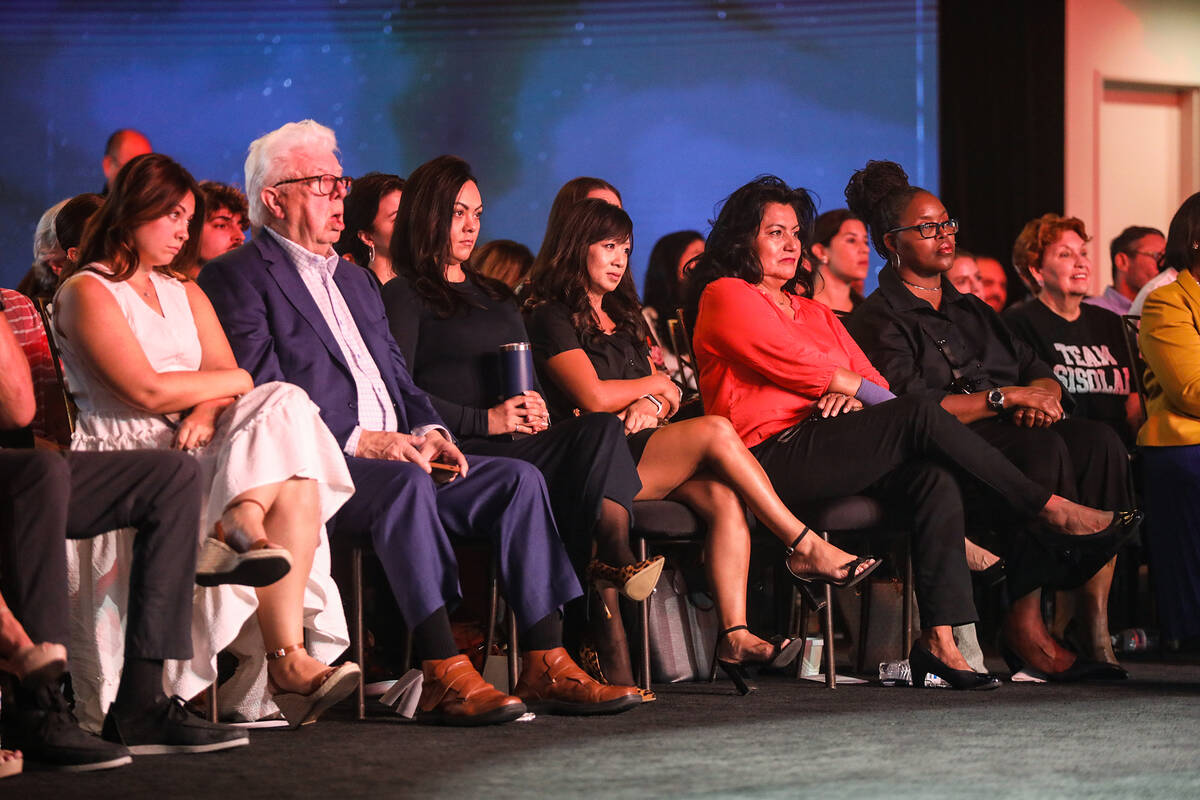 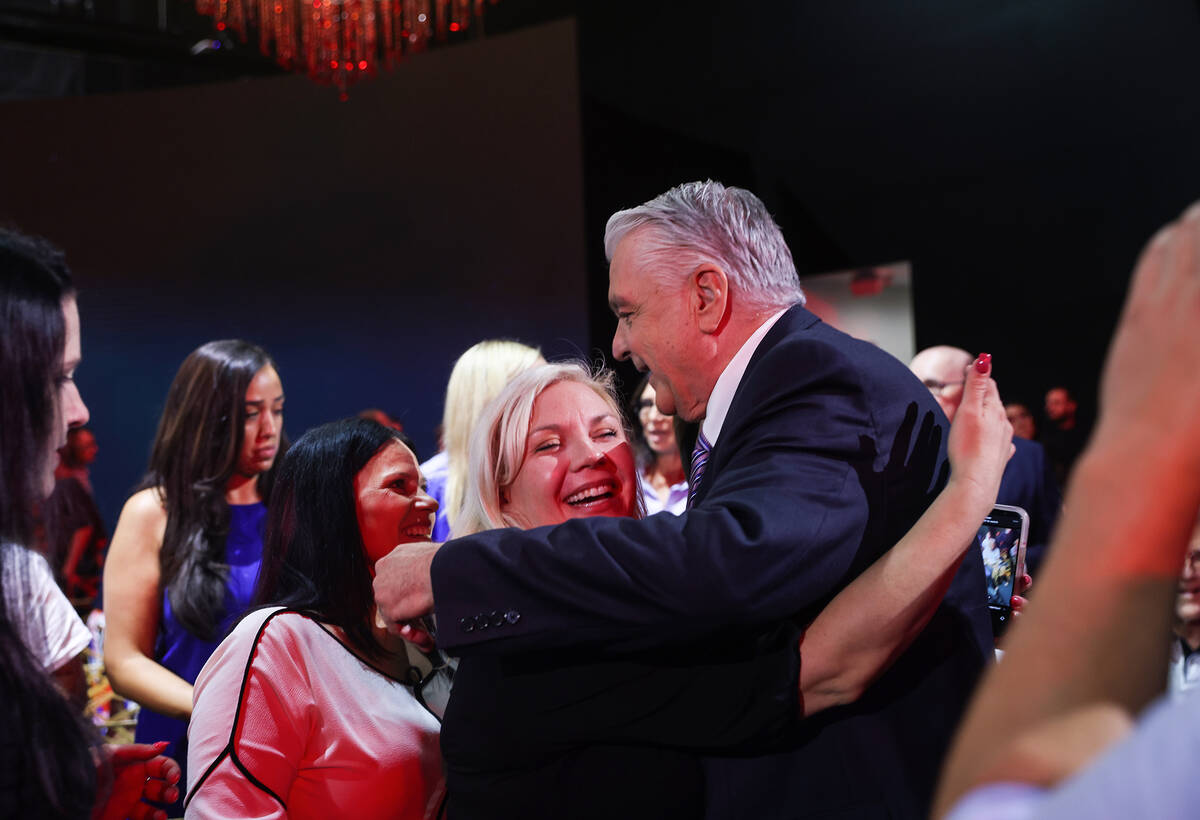 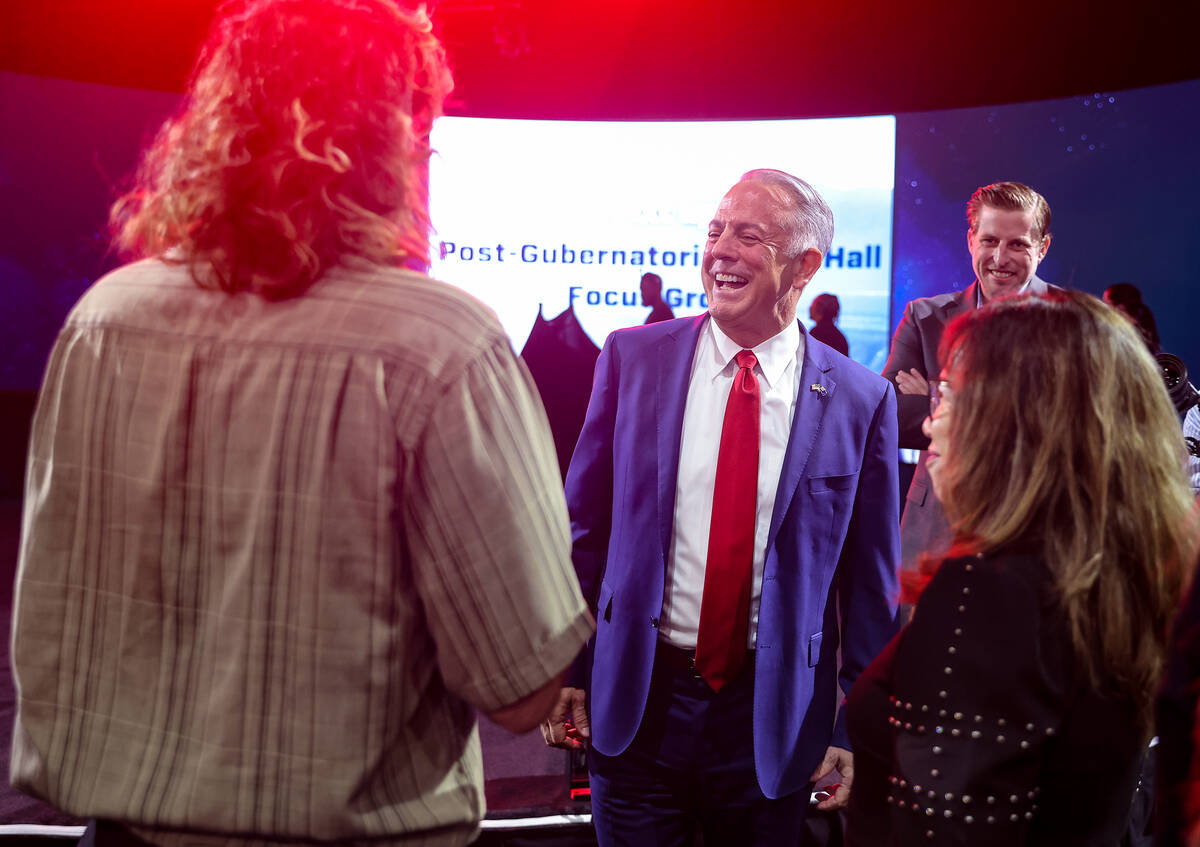 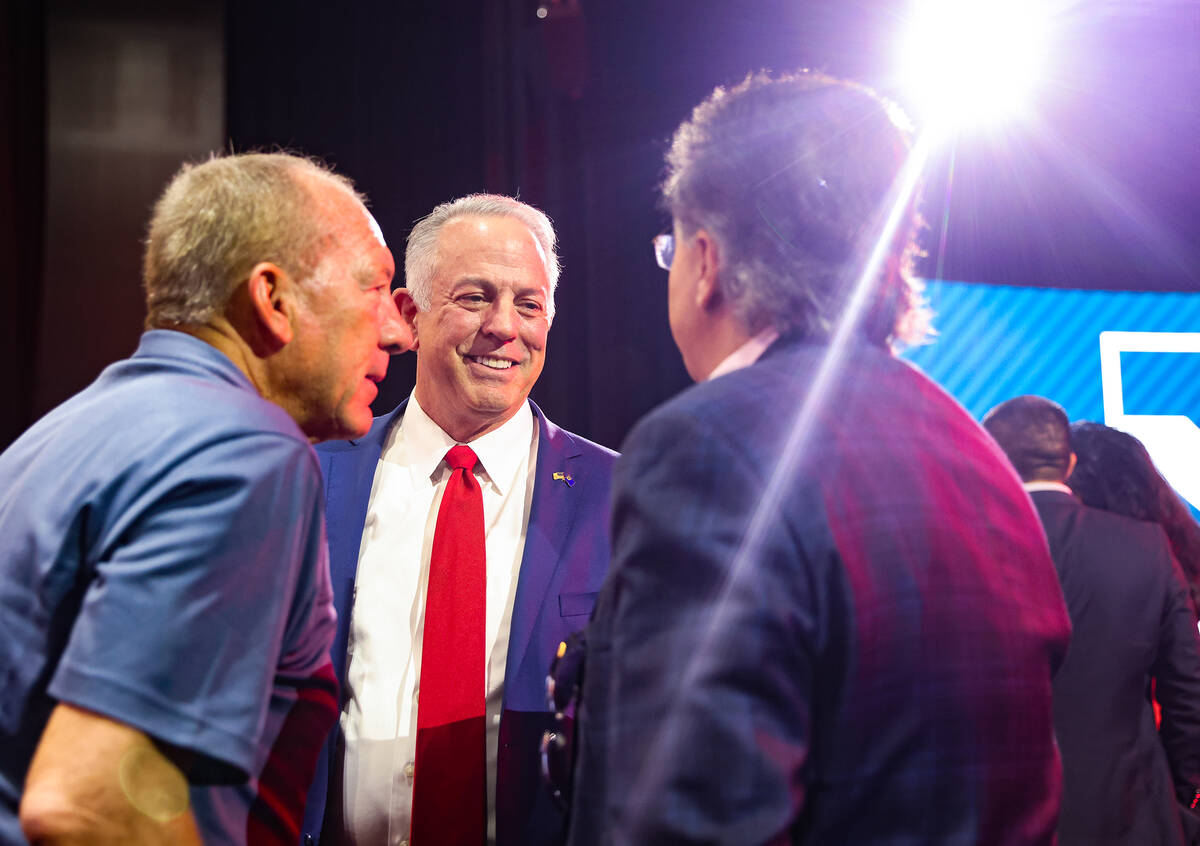 Gov. Steve Sisolak and Republican challenger Joe Lombardo clashed Sunday morning on education, crime, housing, abortion and more in their first — and likely only — debate ahead of the Nov. 8 elections.

Sisolak, the Democratic incumbent seeking his second four-year term, and Lombardo, the two-term sheriff of Clark County, spent most of the debate laying out their vastly different stances on key issues, with the occasional heated exchange and accusation of corruption and cronyism mixed in. The 90-minute town-hall style debate inside of Worre Studios in Las Vegas was hosted by the online nonprofit news outlet The Nevada Independent, and moderated by its CEO Jon Ralston.

The debate, which will air Monday evening at 6:30 p.m. on KSNV-TV Channel 3 in Las Vegas and KRNV-TV Channel 4 in Reno, started with a discussion on education — always a high-profile topic in Nevada given the state’s consistently near-the-bottom placing in national rankings for educational performance and opportunities.

Sisolak and Lombardo both said teachers in Nevada should receive a pay bump, and both said there should be enough money in the upcoming budgets to fund those raises without the need of new taxes.

Sisolak used the opportunity to hit Lombardo over school choice, saying his opponent’s pay raise plan wouldn’t be possible within the existing budget if Lombardo moved forward with an education savings account program that would use public money to fund private school vouchers, which Sisolak said would be money that would otherwise go to funding public schools.

Lombardo defended his support for school choice by pointing to Nevada’s continually poor education rankings, and said that vouchers and other choice programs should be in play in Nevada for students and parents.

“It’s not new. It’s been tried in other jurisdictions,” Lombardo said of private school vouchers. “Why not bring a different paradigm forward. The existing system, we’re 49th, and four years under the current governor we’re 49th.”

The two traded barbs over recent upticks in crime in Clark County and Lombardo repeated his criticisms of criminal justice reform measures that Sisolak and Democrats passed during the 2019 session as the key reason for that increase.

Lombardo said crime decreased in his first six years as sheriff of the state’s most populous county, and only went up after those criminal justice reforms were passed.

Lombardo was specifically referencing Assembly Bill 236 of the 2019 session, an omnibus criminal justice reform package aimed at reducing the rate at which people return to prison in order to lower spending on incarceration. Among other changes, the bill raised the trigger for a felony theft charge from $650 to $1,200 and increased the weight of drugs for a person to be charged with felony trafficking. The final version of the legislation received bipartisan support and passed in the state Senate on a 19-2 vote, with six of eight Republican senators voting in favor. It passed on a party-line vote in the Assembly. Lombardo’s department did not oppose the final version of the bill.

“We were neutral because we finally got to somewhere we could live with knowing that it was still bad legislation,” Lombardo said.

Sisolak meanwhile has run ads laying the blame of rising crime on Lombardo as the county’s top cop. At the debate, Sisolak said he believes there is corruption in Lombardo’s department and criticized the sheriff for not hiring more officers despite more than $100 million in funds raised through the More Cops sales tax program.

“I think there’s corruption in the sheriff’s department in the way he runs the department . the way he awards contracts, with the investigations into some of these things, and the lack of transparency that exists within Metro,” Sisolak said.

Lombardo said the hiring problem is not for lack of trying, but rather a changing of attitudes towards police officers in the wake of the Black Lives Matter protests and calls to “defund the police.”

“We’re not able to hire because the attitude that has been proliferated amongst the public space,” Lombardo said. “It’s not sexy to be a cop anymore because they don’t feel like they have the support.”

As a county commissioner, Sisolak repeatedly stood against approving a sales tax increase under the More Cops program, finally striking a deal with Lombardo to approve a portion of the legislatively authorized increase.

On abortion, the moderator pressed Lombardo on his shifting stance on various aspects of reproductive rights, noting that Lombardo previously said he would support a ban after the 13th week of pregnancy while now saying he supports Nevada’s law that allows for abortions up to the 24th week. He also noted Lombardo recently changed his stance on about repealing a Sisolak executive order that made it so that no Nevada agency can provide information or use resources to help authorities from other states in investigating people for receiving or providing an abortion in Nevada.

Lombardo said he changed his mind after thinking about Nevada’s law more, and backed off his stance on repealing the order because officials in Alabama, where abortion is now outlawed, have indicated that they could prosecute people who help a woman get an abortion in a different state.

The U.S. Supreme Court decision to overturn Roe v. Wade made no immediate impact on Nevada, where voters in 1990 approved a referendum to allow abortions up to the 24th week of pregnancy. That law can only be undone by another vote of the people or if the federal government were to pass some kind of national abortion restriction.

The moderator also pressed Sisolak on what limits he would support, such as a law that allows abortions as late as the 34th or 35th week. Sisolak called it “political theater,” and said there are a very low number of late-term abortions. But the governor admitted that he doesn’t think a woman would have the right “to make that decision” at the 35th week of pregnancy.

Lombardo was asked if he thinks President Donald Trump, who has endorsed Lombardo and is set to make his second campaign Nevada stump for the Republican nominee this month, was a “great president.”

But when he was pressed about Trump’s unsubstantiated claims of widespread voter fraud, which have been rebuked by election officials across the state include Republican Secretary of State Barbara Cegavske, Lombardo said those claims from Trump “bothers me,” and agreed that Trump undermined the confidence of voters.

“You’re never going to agree with anybody 100 percent in everything they do,” Lombardo said. “But you’ve got to look at the totality of the person and their ideas and their leadership and support it in that aspect.”

One of the more heated points of the debate came when the moderator brought up ads from the Republican Governors Association that have claimed Sisolak is under investigation as part of a federal investigation into Northshore Labs, a company that was able to quickly expand COVID testing in Nevada but showed a very high rate of inaccurate results. Those problems with Northshore were detailed in an investigation by ProPublica in May.

Sisolak said that his office cooperated with the federal investigation once officials were alerted to the issues with the lab company, and said that he never had a conversation with the father of the brothers who run the company, who had donated extensively to Sisolak’s campaigns over the last decade.

“I never intervened on behalf of this company. They never got one penny of state of resources. And as soon as we found out there was a problem, we immediately suspended their operations,” Sisolak said.

The moderator asked Lombardo to provide evidence that Sisolak was under investigation, but Lombardo balked.

“I don’t know that for a fact personally. I’m not saying that. The PAC is saying that,” Lombardo said.

Pressed further about why he hasn’t asked the PAC to take the ad down, Lombardo said, “I haven’t seen any evidence contrarian to that point of view.”

Sunday’s debate is likely the only time Sisolak and Lombardo will square off for voters before Nov. 8, as the two have yet to come to an agreement for any other debate appearances.

Asked about the prospects of a second debate after walking off the stage Sunday, Sisolak was noncommittal.

“I’ve got a pretty packed schedule for the next 35 days,” he said.