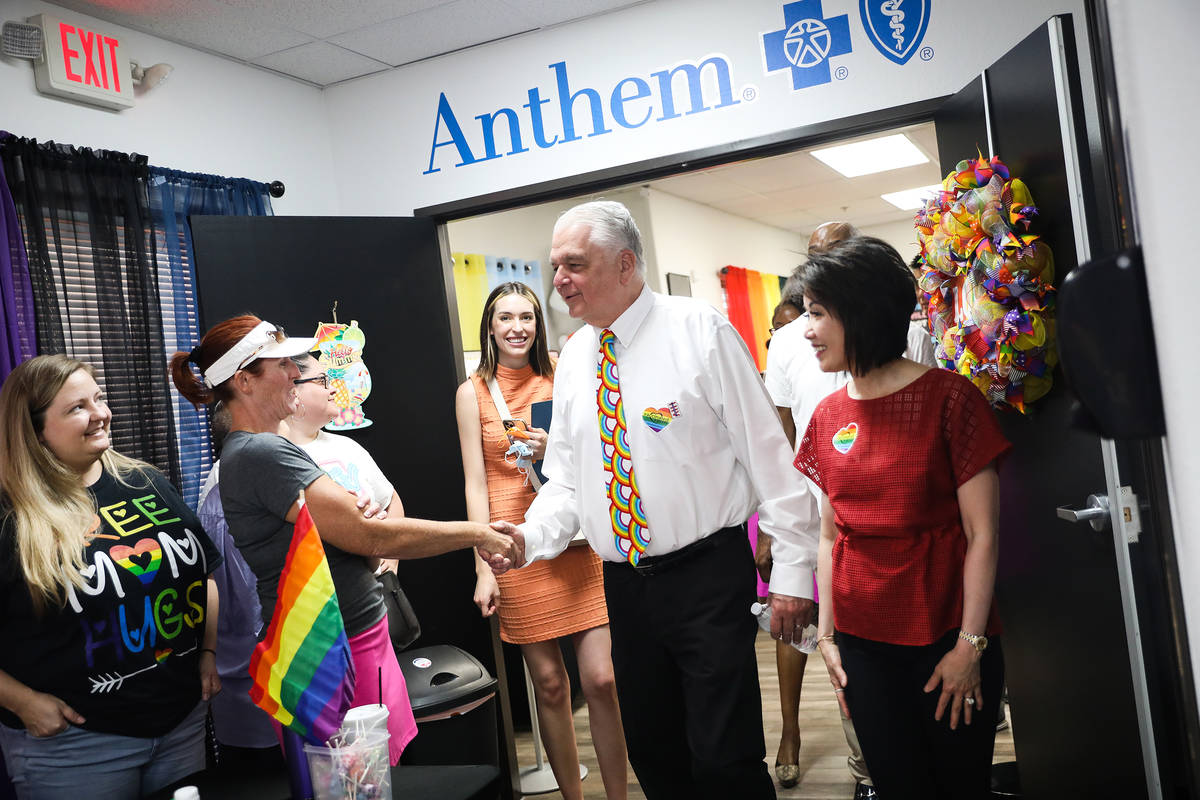 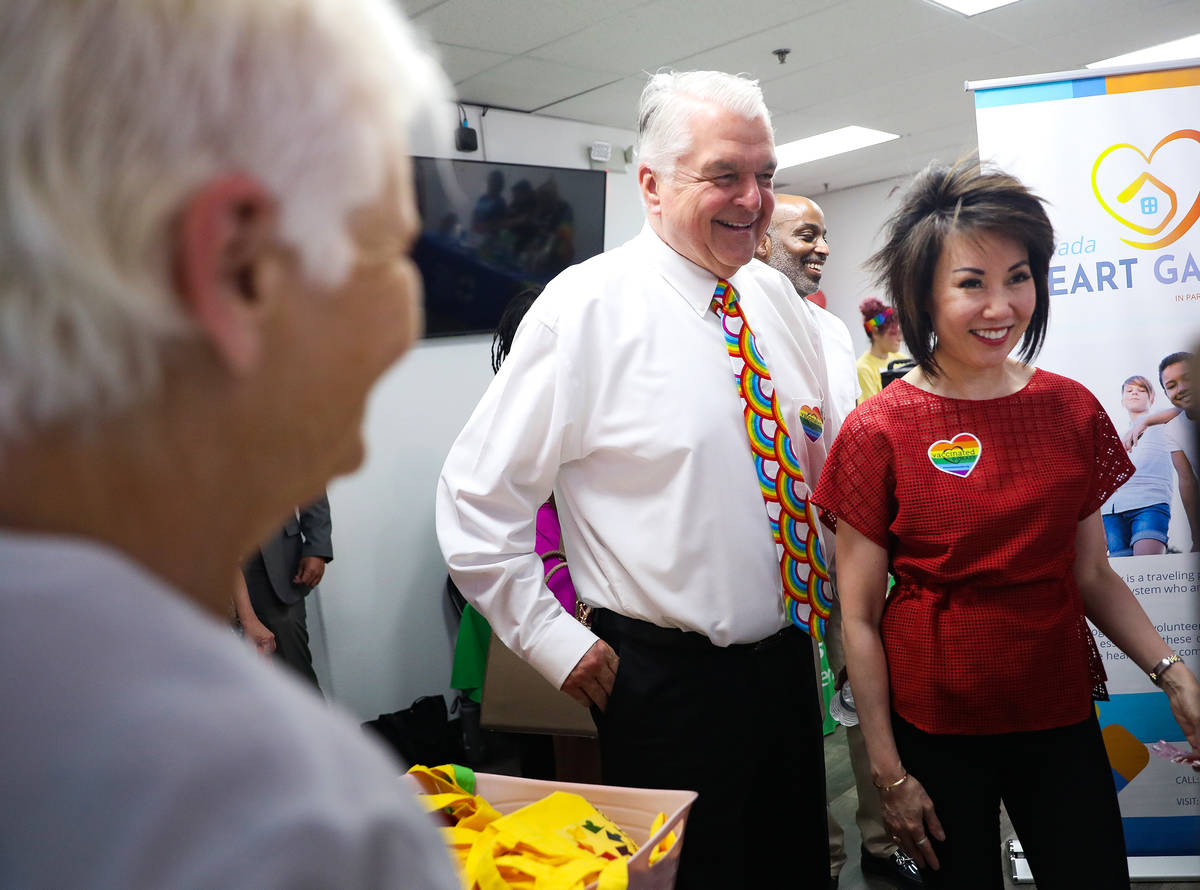 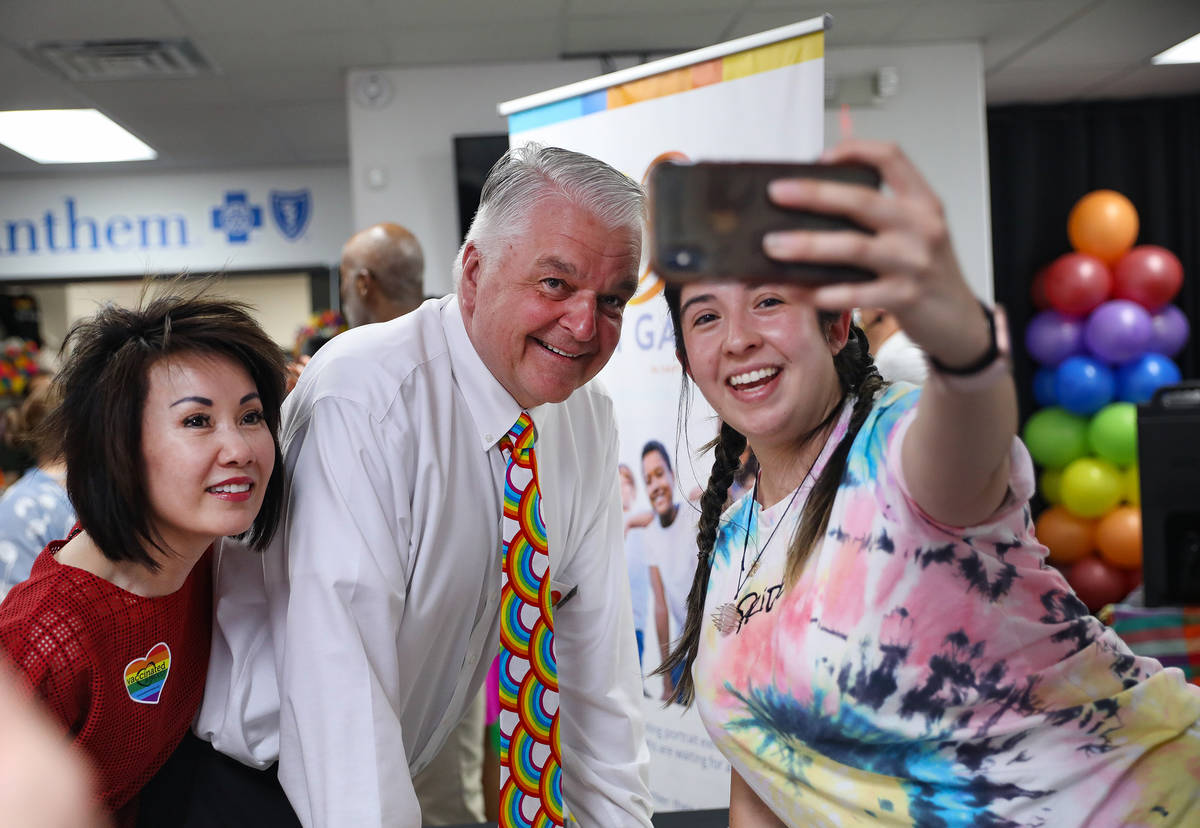 Gov. Steve Sisolak, center, takes a selfie with Sydney Brandt, a recruitment coordinator with Raise The Future, right, alongside his wife Kathy Sisolak, far left, as they tour the Henderson Equality Center during their Pride Fest on Sunday, June 6, 2021, in Henderson. (Rachel Aston/Las Vegas Review-Journal) @rookie__rae 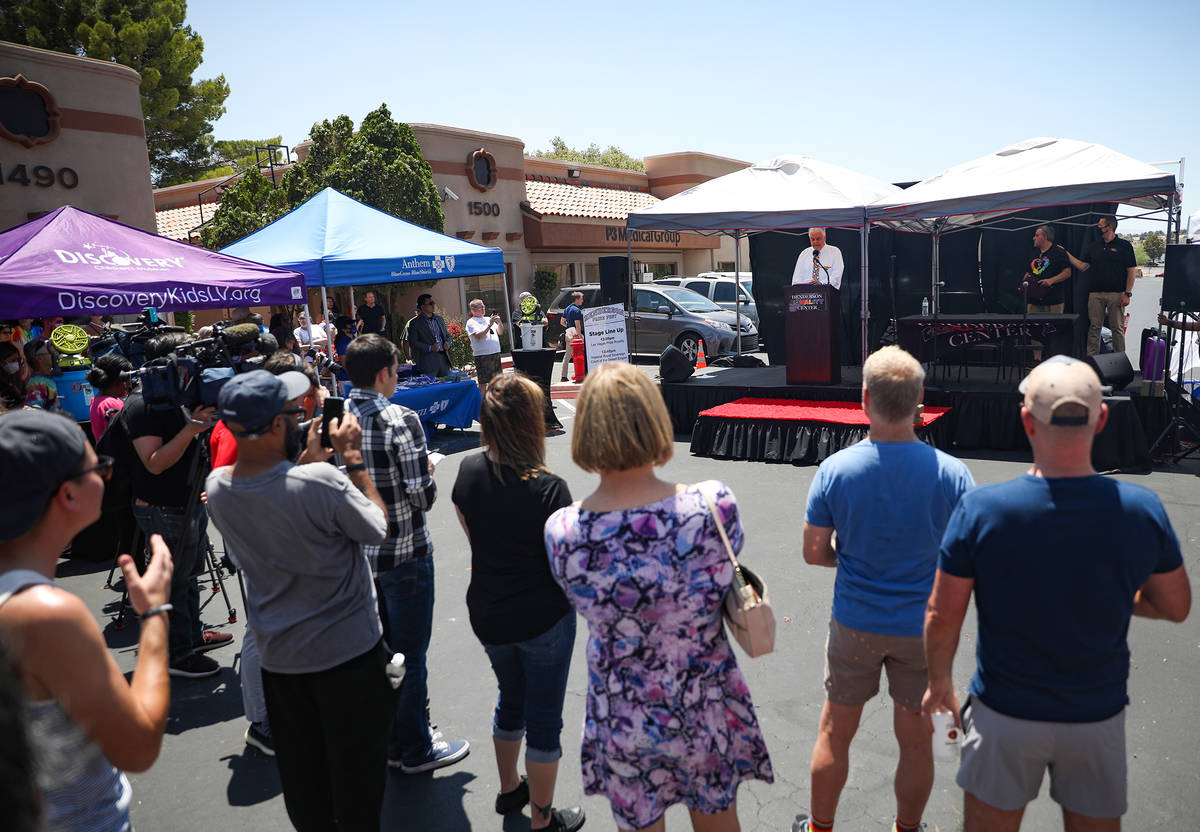 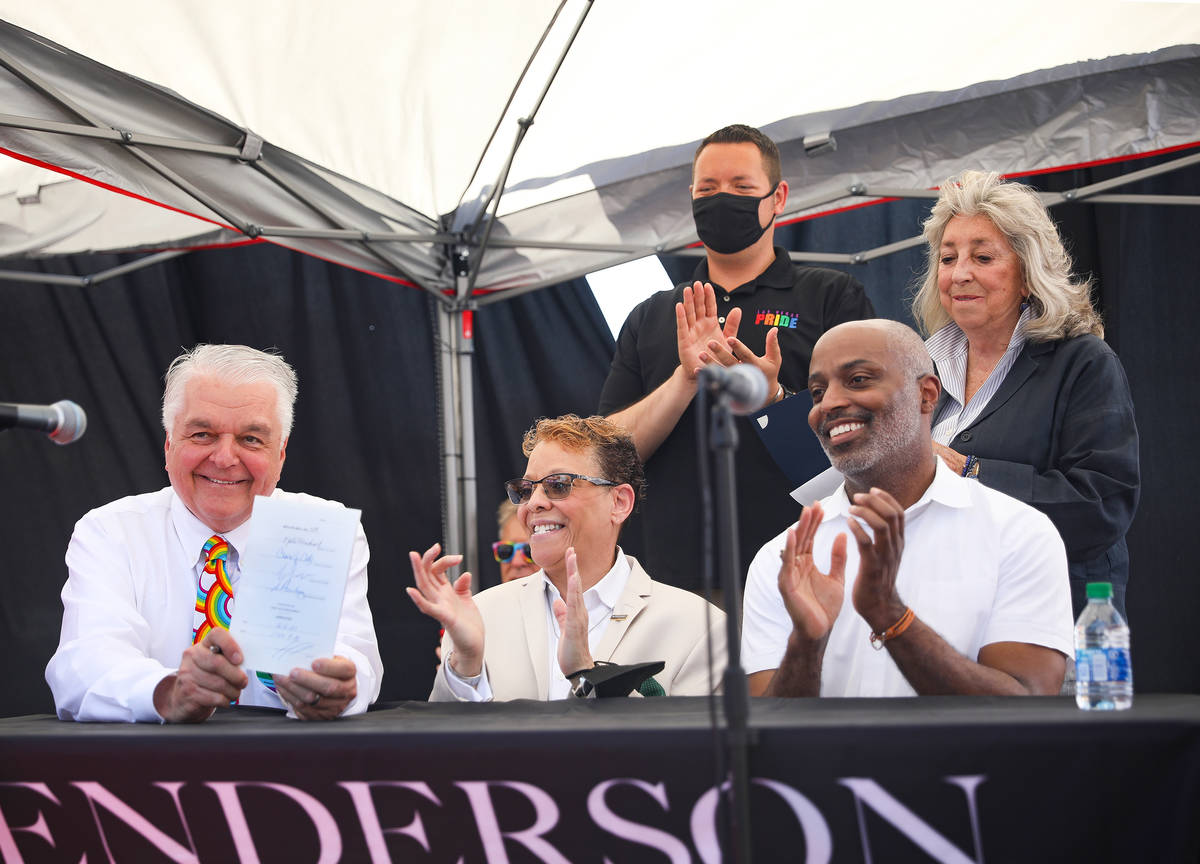 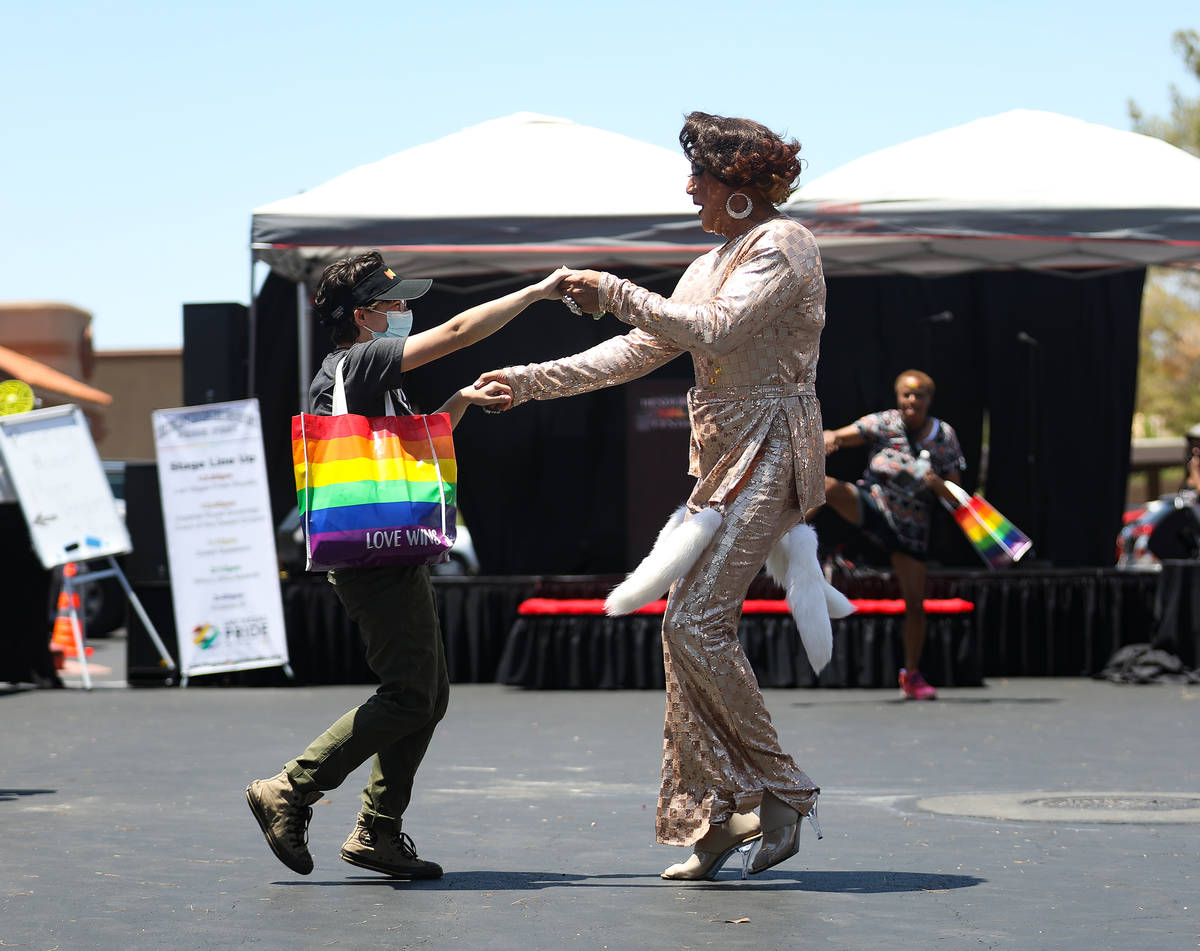 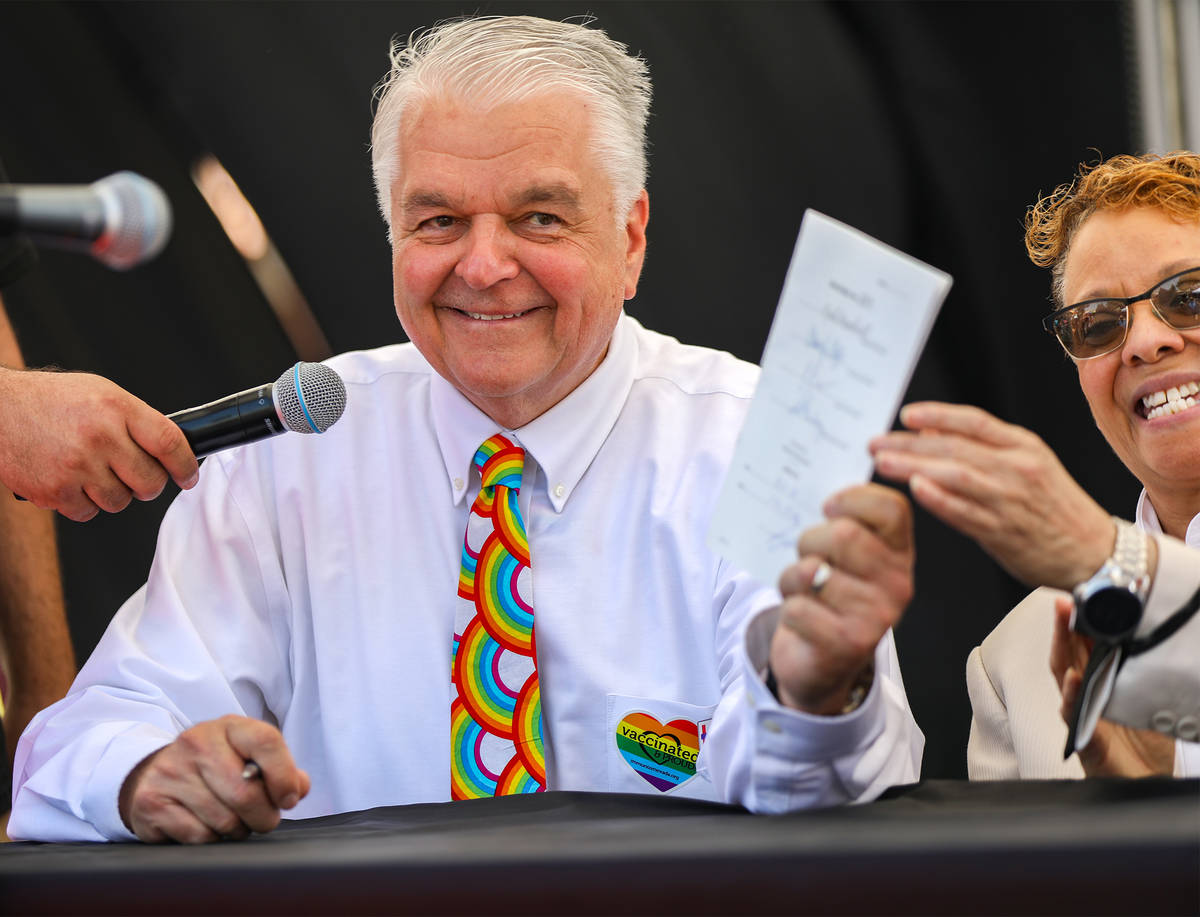 Gov. Steve Sisolak, left, holds up one the bills he signed that helps the LGBTQ community alongside at Pride Fest at the Henderson Equality Center on Sunday, June 6, 2021, in Henderson. Sisolak signed four bills at the event that support the LGBTQ community. (Rachel Aston/Las Vegas Review-Journal) @rookie__rae

Wearing a tie covered in rainbows, Gov. Steve Sisolak stepped up to a lectern at the Henderson Equality Center and smiled at the crowd of over 100.

“Normally, you probably know, we sign hundreds of bills in Carson City, and we go through a process,” he said. “We’re making an exception because it is so important that we bring these bills to the community, to this center. To help you understand how important it is.”

On a sweltering Pride Month afternoon, Sisolak was on hand to sign four bills – SB109, SB237, SB275 and SB375 – aimed at improving LGBTQ equity. He spoke during the Henderson Pride Festival, an inaugural celebration that featured performances, food vendors and more.

Officially signed into law at the event, the legislation will help expand LGBTQ businesses, help provide equal access and opportunities to LGBTQ people, expand resources for pharmacists to provide care for HIV-positive people and mandate that local governments gather more demographic info on their constituents.

Nevada Rep. Dina Titus, a Democrat, also spoke at the event, lauding the community for pushing to get this legislation passed at the state level.

“Legislators and governors can’t do it without your input, your advocacy, your educating the public and all that you do to support us,” she said. “So thank you for all of that. Not just during Pride Month, but every day you’re on the front lines.”

Sisolak also toured the center before his speech.

“To be able to have the governor come out and be present to sign this in front of the LGBT community — that it’s not just something that is in Carson City that nobody gets to witness,” Davin said. “It’s very rare to see a bill signing. Really it’s something monumental.”