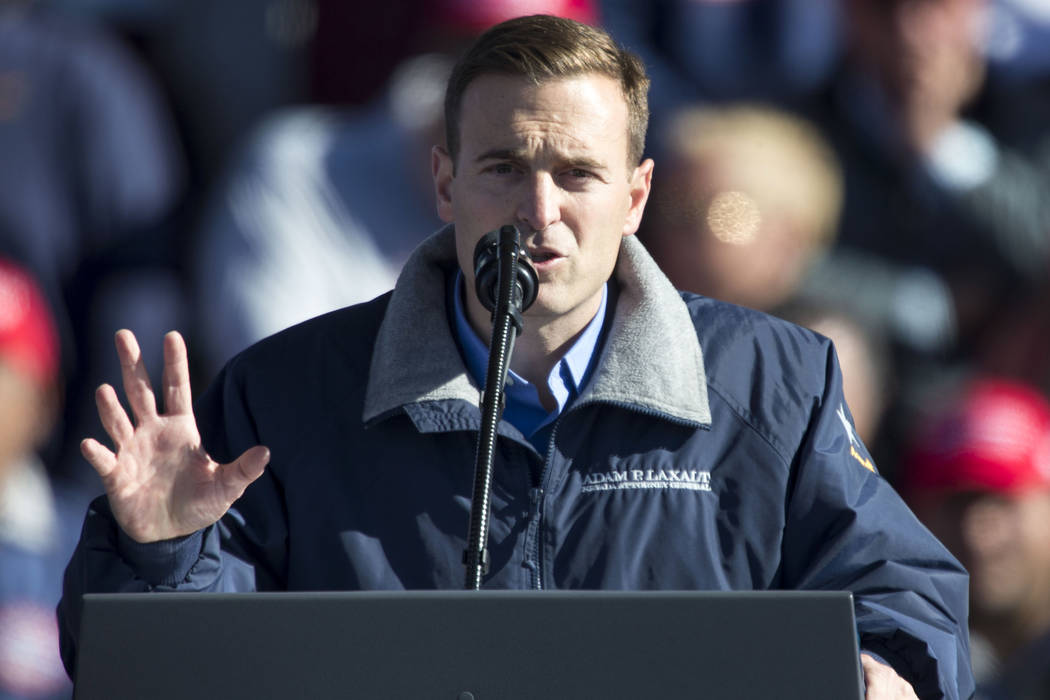 One. Despite President Donald Trump’s narrow loss to Hillary Clinton in 2016, the Trump re-election campaign is working to win Nevada in 2020.

Two. After a bruising defeat in his bid to become governor in 2018 against Democrat Steve Sisolak, Laxalt wants to remain a force Nevada Republican politics.

The speaker’s roster plants Laxalt firmly with the pro-Trump camp. According to a White House aide speaking on background, Mulvaney will be attending in his personal capacity.

The Basque Fry — known as the “lamb fry” by old GOP hands who regularly attended traditional Basque fries hosted by Laxalt’s late grandfather, former GOP Sen. Paul Laxalt — will take place at the Corley Ranch. The event will be co-hosted by Laxalt’s Morning in Nevada PAC and the American Conservative Union.

Making it his own

“Adam has taken the title and developed it in his own format in Nevada,” said Tom Lorentzen, a long-time friend of the late senator.

Laxalt said the barbecue is “meant to be a fun political event. It’s not meant to be one of those high-end fundraisers, but “an actual event where people are enjoying themselves.” It’s family friendly, he added. There will be a petting zoo and face painting.

Laxalt expects as many as 2,000 people to attend the fry or the CPAC West event Friday in Reno — the first western version of the American Conservative Union’s annual Conservative Political Action Conference in Maryland. Trump has spoken at the Maryland event every year since he won the White House.

Laxalt told the Review-Journal that the Trump campaign and the American Conservative Union “are investing in this swing state because they see it as a great anchor” in the west that they don’t want to see turn into “a small version of California.”

The Trump campaign has been making noises about courting voters in swing states Trump lost to Hillary Clinton in 2016. They see an opportunity to win back Nevada voters after the Silver State went blue — with Democrats winning all but one statewide office — during the 2018 elections.

“I think Nevada is still a very competitive state. You’d rather be a Democrat than a Republican,” said Kyle Kondik of the University of Virginia Center for Politics, but “it’s not crazy to suggest” Trump could win, he said.

Nevada did not swing as far to the left in 2018 as the rest of the nation, Kondik observed.

Some 17 percent of eligible voters in Nevada are Hispanic, according to the Pew Research Center. On the one hand, Nevada is a diverse state, which helps Democrats, but Kondik added, the state also has a considerable working-class population which can favor Republicans.

GOP boots on the ground

Nevada Republican Party executive director Will Sexauer sees the opening of a Trump victory office in Reno as a sign that the Trump team “realized the importance of Washoe County.” The campaign put a dozen boots on Nevada ground “earlier than we’ve ever had them before.”

The Trump team told Time magazine the campaign believes Trump can pick up a number of swing states which he lost in 2016. Campaign gurus argue Trump’s push for China tariffs and a southwest border wall could help win votes with a slice of Hispanic voters in the sunbelt states.

“Nevada is a battleground state and I don’t think Democrats can take anything for granted in 2020,” said Stewart Boss, a Democratic operative who has worked for Nevada campaigns. “On the flip side, I think it remains an uphill climb for Republicans after 2016 and 2018,” when the GOP lost the governor’s mansion for the first time in 20 years. Boss described Laxalt as a candidate as “underwhelming.”

“In a way, they have to say this,” Democratic pollster Paul Maslin told the Review-Journal. He said polls suggest Trump could lose Pennsylvania, Michigan and Wisconsin — three rust-belt states key to his 2016 surprise victory — so the campaign has to say it can pick up new states.

Of all the swing states Trump lost in 2016, Maslin offered, “the only one where there’s a flimsy chance is probably Nevada.”

Matt Schlapp thinks the Trump bid for southwest Latino votes could work. “Initially the president’s rhetoric around immigration may have been jarring to Hispanic voters, but over the course of three years they’ve been able to see what he wants to do on immigration.”

“And they admire the fact that he’s trying to take it on,” said Schlapp, who sees Friday’s CPAC West confab as a fact-finding opportunity.

Laxalt’s strong support for the Trump re-election effort has insiders wondering if he is considering a run in 2022. (There will be no statewide election in 2020.)

“This isn’t about me,” the former attorney general told told the Review-Journal. He said he has “no plans to run for anything right now.”

Former Nevada Gaming Commissioner Joe Brown said he does not see Laxalt running in 2020, when there are no statewide offices, but he sees Laxalt keeping his options open for the future.