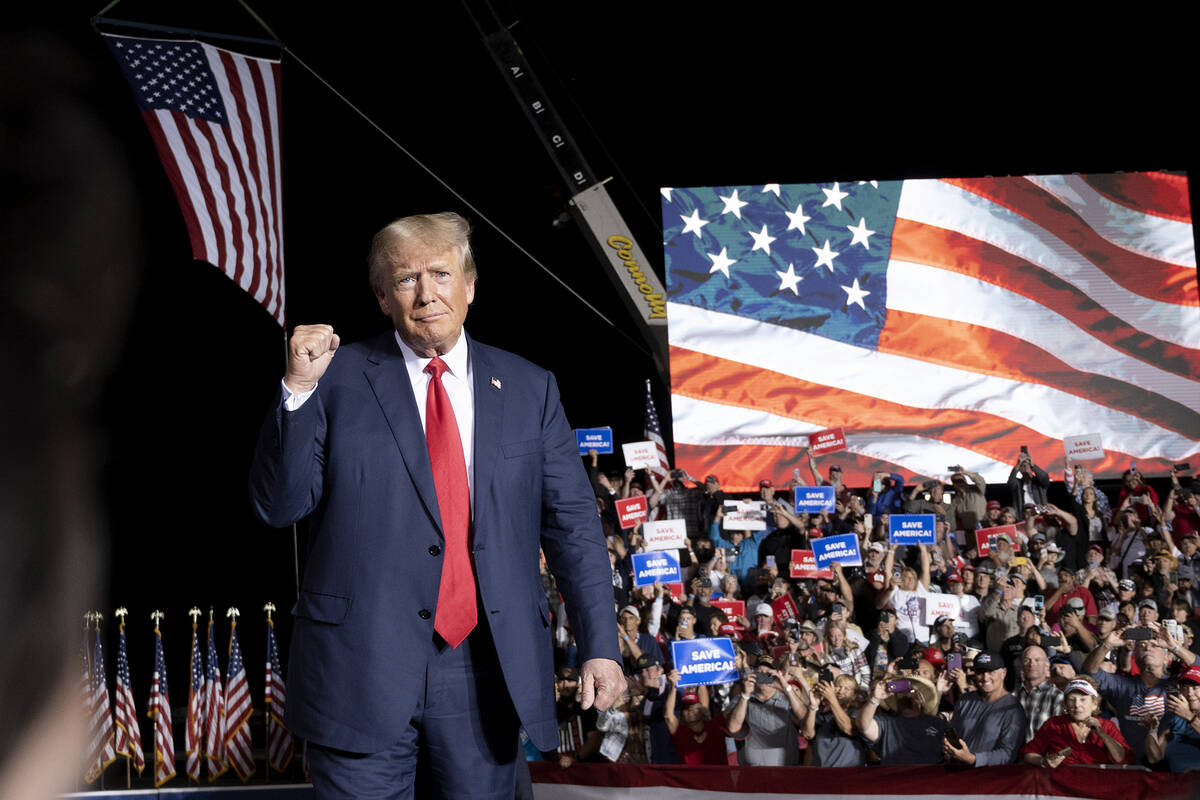 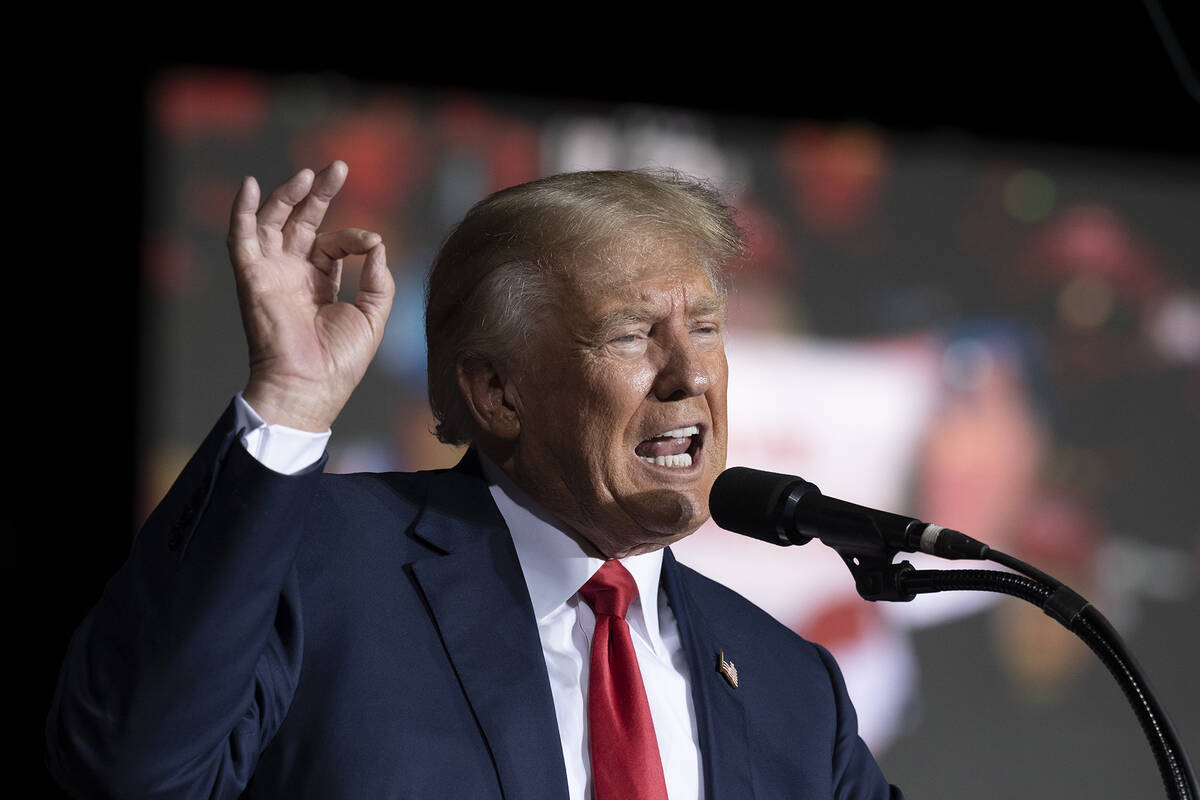 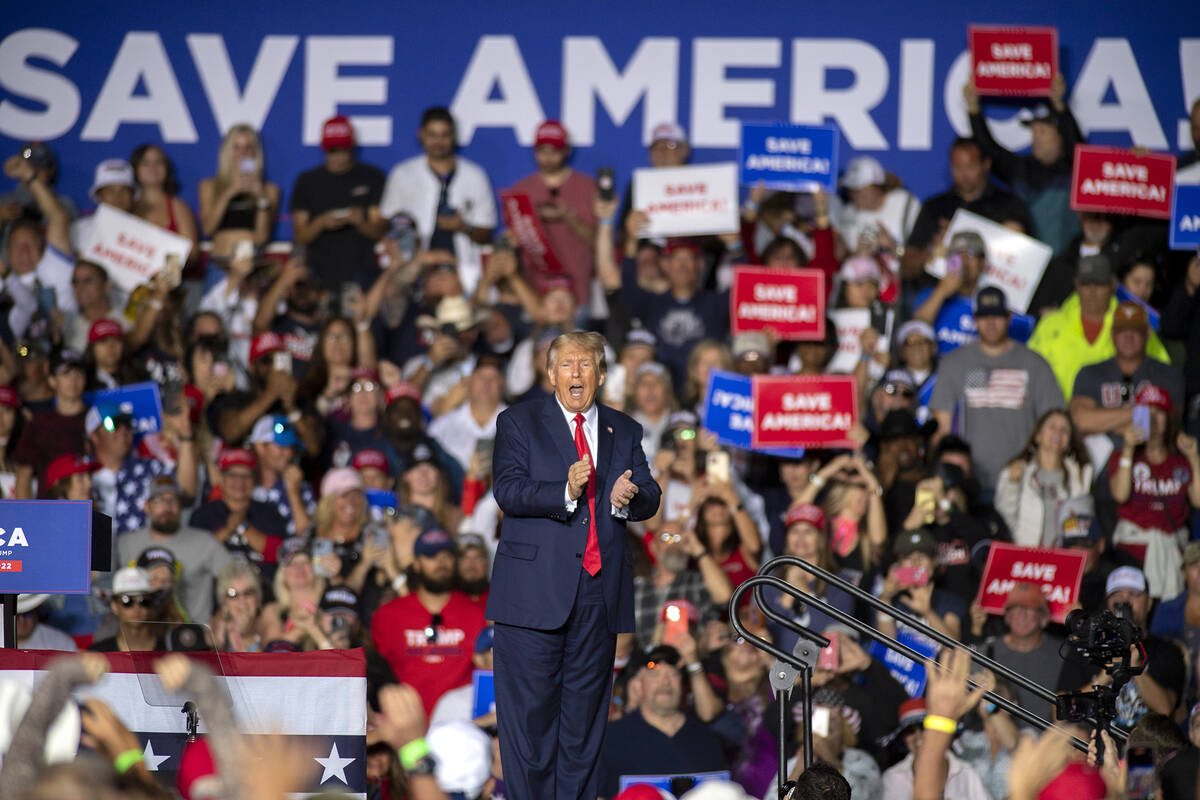 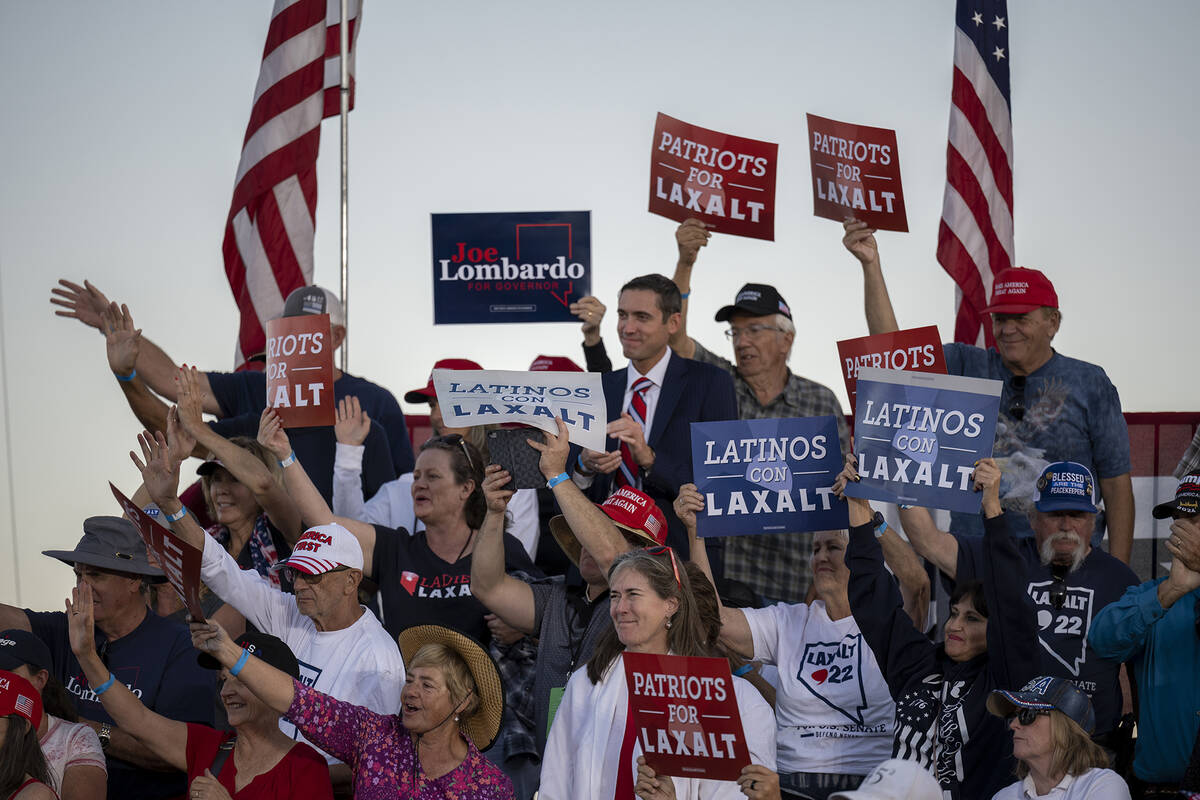 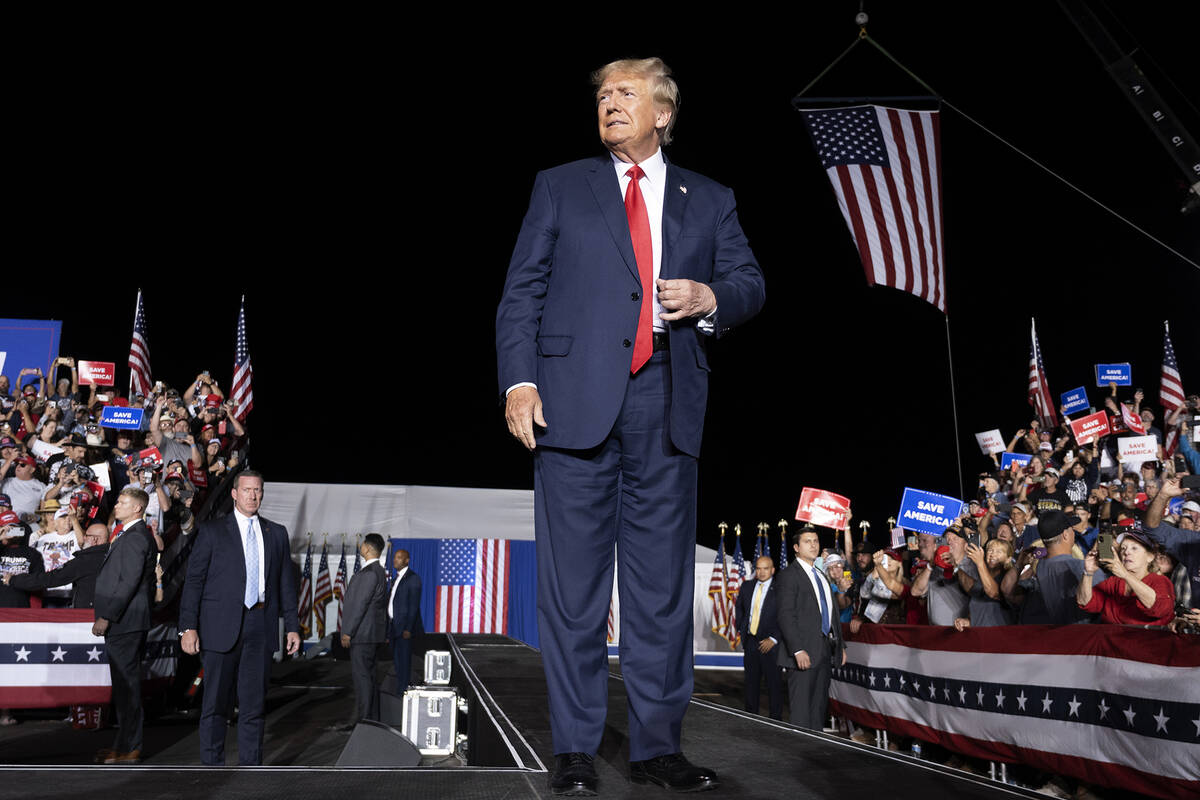 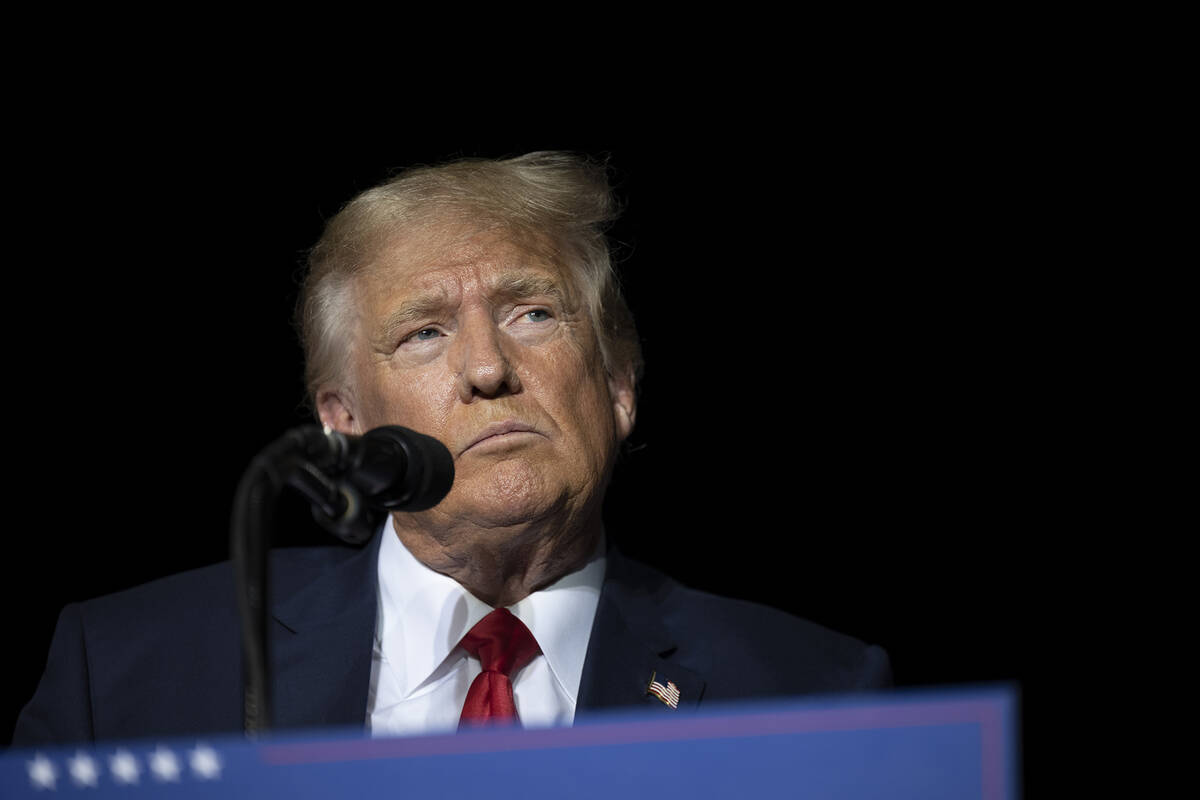 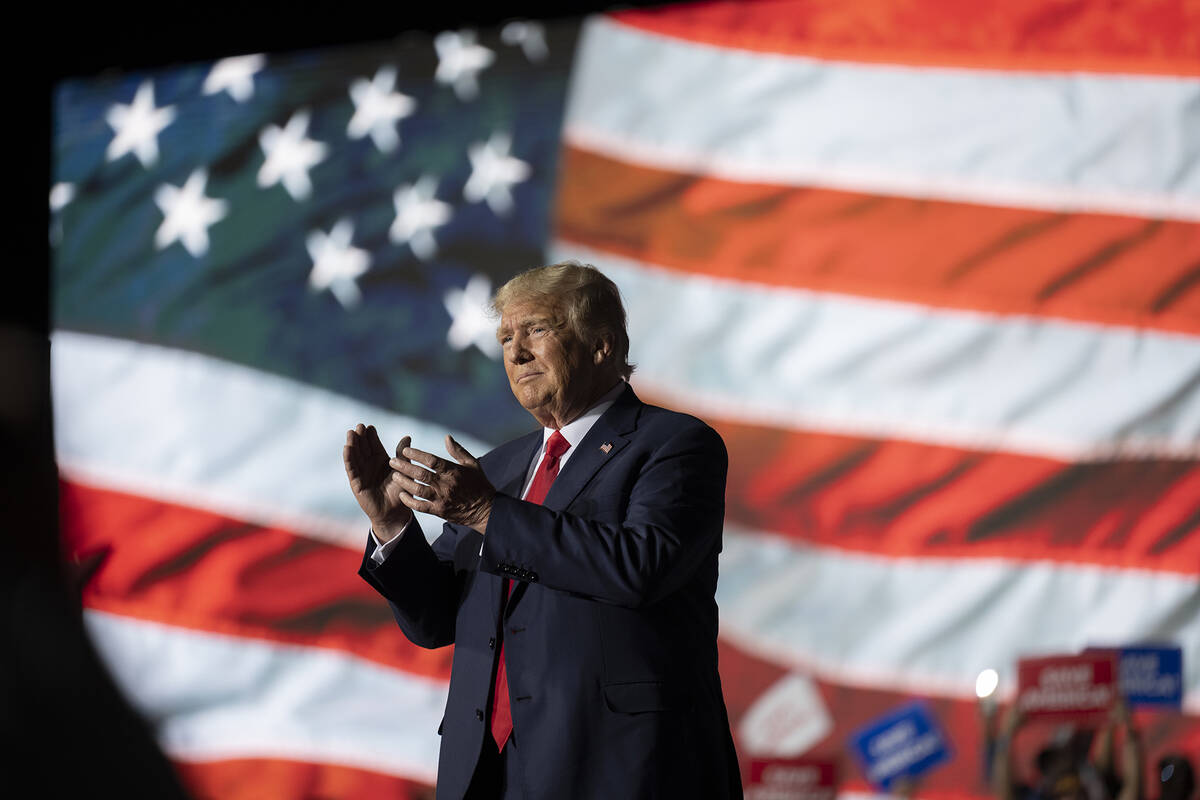 MINDEN — Former President Donald Trump attacked Democrats in Nevada and criticized an FBI raid on his Florida home while stumping for Silver State Republican hopefuls at a rally on Saturday evening.

Trump took the stage in Minden after remarks from Laxalt and Lombardo, both of whom have already secured the former president’s endorsement.

Pres. Trump said the country is at a "tipping point" and encourages attendees to vote for Republicans.
"If you want to see great things for our country and the real American dream, you're going to vote Republican up and down the line," he said.

“Under Steve Sisolak, your crime-loving governor and the radical left Democrats, the streets of our once great cities are drenched in the blood of innocent victims,” Trump said while referencing a Las Vegas Strip stabbing that left two dead earlier this week.

Carol Groesbeck of Boise, ID, a self-proclaimed “Trumpie,” said this was her first Trump rally. pic.twitter.com/cE0EQM1O8p

Warren Trumbly of Elk Grove, CA said he came to the rally because seeing Trump speak was “a once in a lifetime opportunity.” pic.twitter.com/bq4e7LKDch

Trump talks about the recent stabbing on the Las Vegas Strip that left two dead and says @GovSisolak is to blame for city streets “drenched in the blood of innocent victims.”

It wasn’t Trump’s first rally at the Minden-Tahoe airport. The former president spoke at an event held in the same place a little over two years ago. The event, which was attended by thousands of supporters, led to state officials issuing Douglas County more than $5,000 in fines for violating state COVID-19 restrictions.

The event came exactly two weeks before the beginning of early voting in Nevada and could mean the difference in tight races for some of the state’s top spots.

.@AdamLaxalt has taken the stage and almost immediately slams his opponent @CortezMasto—“She’ll say and do anything to win.” pic.twitter.com/IlSX9Jpd0r

Laxalt, the state’s former attorney general, is running against Cortez Masto in one of the most closely watched races in the nation, with many polls placing the race within the margin of error.

Lombardo is running against Democratic Gov. Steve Sisolak. They faced off for the first, and likely last time, during a debate in Las Vegas on Oct. 2, hosted by the nonprofit online website The Nevada Independent.

During the debate, Lombardo declined to say Trump was a “great president.”

.@JoeLombardoNV asks attendees to say “Sack Sisolak” as he takes a photo of the crowd. pic.twitter.com/ucU0qVUZjP

“I wouldn’t use that adjective. I think he was a sound president,” Lombardo said. Later, his campaign walked back the remark in a release that said Trump was a great president by “all measures.”

Lombardo again walked back the comment during his remarks prior to Trump’s arrival.

“We’re here to rally for the Republican ticket, and who’s going to help us?” he said. “The greatest president, right? Donald J. Trump. I’m going to say it to you all upfront. I want to thank him from the bottom of my heart for being here today and helping us achieve what we’re trying to achieve.”

The Republican candidate for governor slammed his opponent for inflation, education and Second Amendment rights.

Michael J. McDonald, chair of the Republican Party of Nevada, asks the crowd if they think there was fraud in the last election, and many cheered.

“What do you think would happen if he got re-elected? First order of business: They go after your guns,” he said. “We’re going to prevent that from happening.”

Laxalt, who was introduced by Alabama U.S. Sen. Tommy Tuberville, focused the majority of his remarks on his opponent, Sen. Catherine Cortez Masto.

“Senator Masto, with the help of the media, and tons and tons of money, she does what Democrats do all over the country. She’ll do and say whatever it takes to win,” the former attorney general said.

Laxalt went on to slam Cortez Masto for the U.S. lack of energy independence and the “open border.”

In an emailed statement sent before the rally began, Cortez Masto again linked her opponent to the Jan. 6 attack on the U.S. Capitol.

Jim Marchant, who is running for Sec. of State says, if he is elected, ballots will be hand-counted on a "precinct-level basis."

“Adam Laxalt led the fight to overturn Nevada’s 2020 election for Donald Trump, and now he’s once again standing with the defeated former president instead of the people of Nevada,” she said in an emailed statement. “The baseless lies that Laxalt and Trump pushed inspired a violent attack on our Capitol and law enforcement, and neither one of them has shown remorse. Laxalt will do whatever it takes to gain power because he’s only out for himself.”

Despite fronting for the election challenging lawsuits filed by Trump lawyers in 2020, Laxalt recently acknowledged in an interview with the Review-Journal editorial board that Joe Biden won the election and was the legitimate president.

Pam McCoy of Sparks said she wouldn’t mind if Trump ran in 2024 and said that she thinks the country is headed in “the wrong direction.” pic.twitter.com/LkTGaGw5IW

A spokesperson with Gov. Steve Sisolak’s campaign likened Lombardo’s appearance with the former president as a “desperate attempt to change the subject.”

David Estey of Grass Valley, CA described himself as a “devout Republican” and said he thinks things need to change or the country will be in trouble. pic.twitter.com/KGPCJIaaTo

“Whether it’s on abortion or Donald Trump, Lombardo has consistently shown that he will do or say anything to win, including lying to Nevadans whenever it is politically convenient. At the end of the day, no amount of Trump visits will change the fact that Lombardo is a corrupt, failed politician who is only looking out for himself,” Sisolak spokesperson Natalie Gould said in a statement sent before the start of the rally.