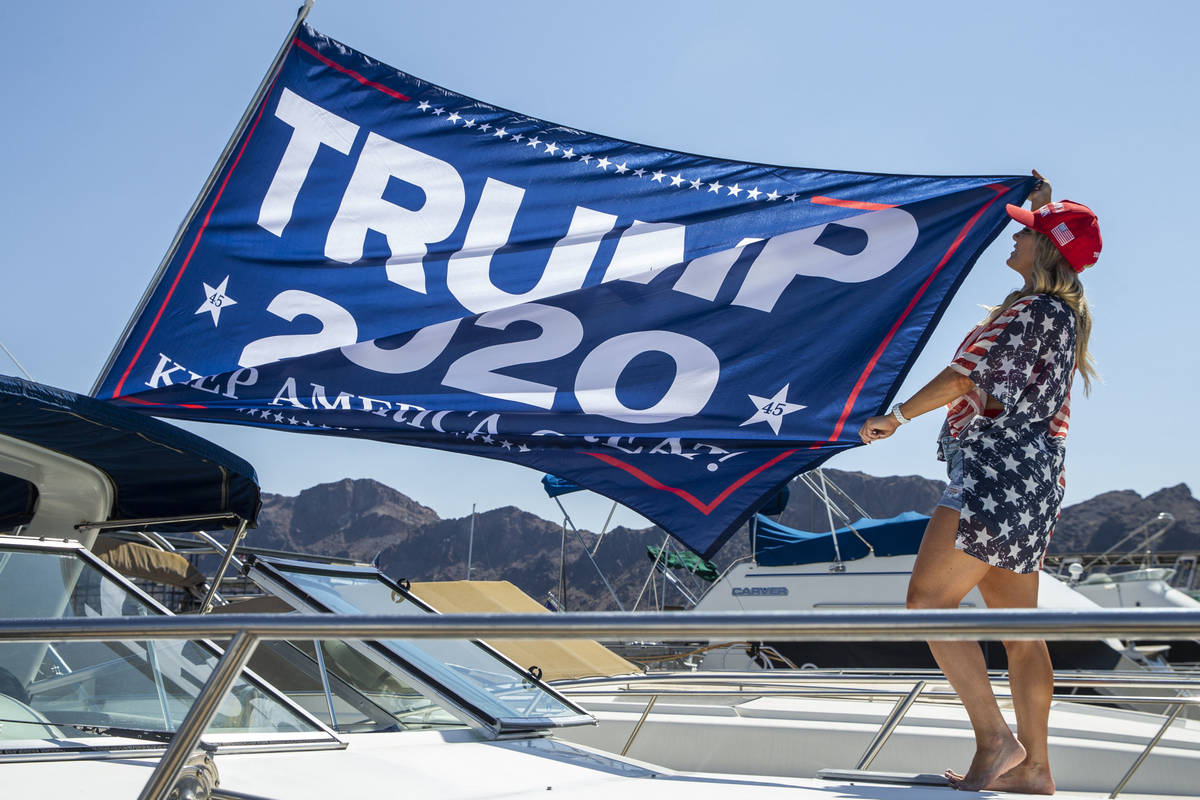 Event organizer Christine Snedden unfurls a flag as she and others prepare their boat for the President Donald Trump boat parade at the Lake Mead Boat Harbor on Saturday, Sept. 12, 2020, near Boulder City. (L.E. Baskow/Las Vegas Review-Journal) @Left_Eye_Images 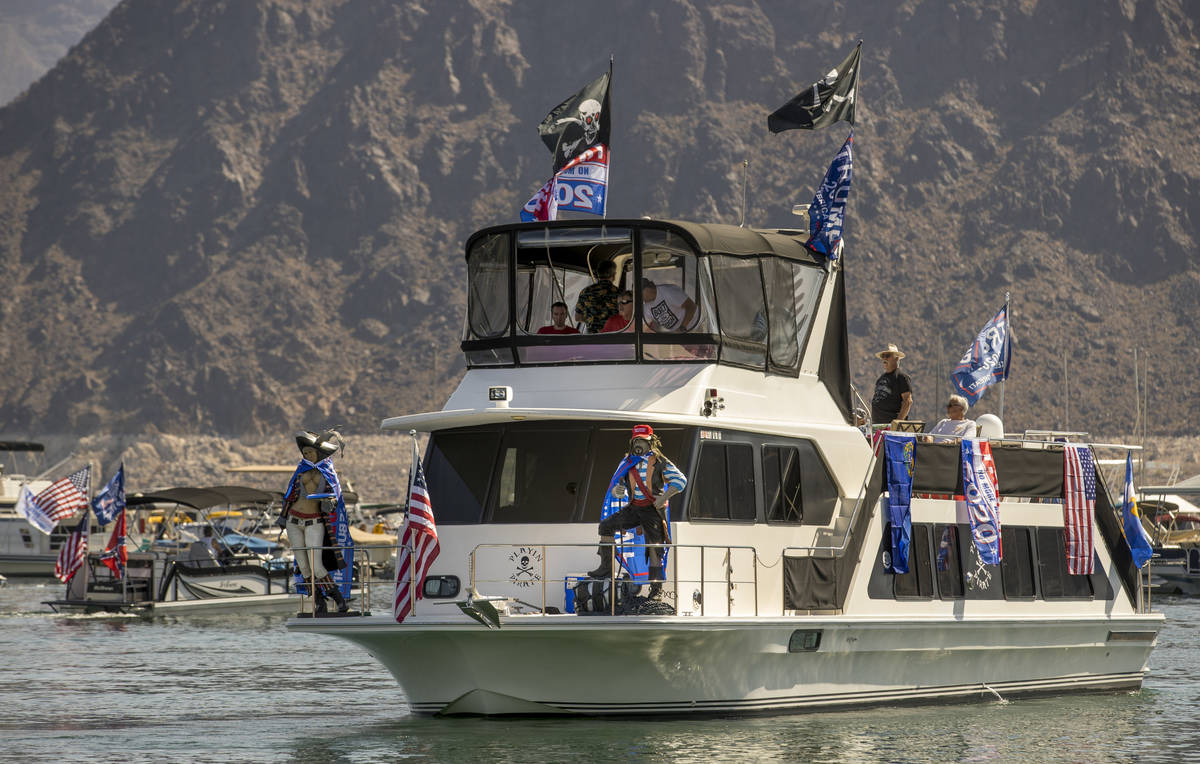 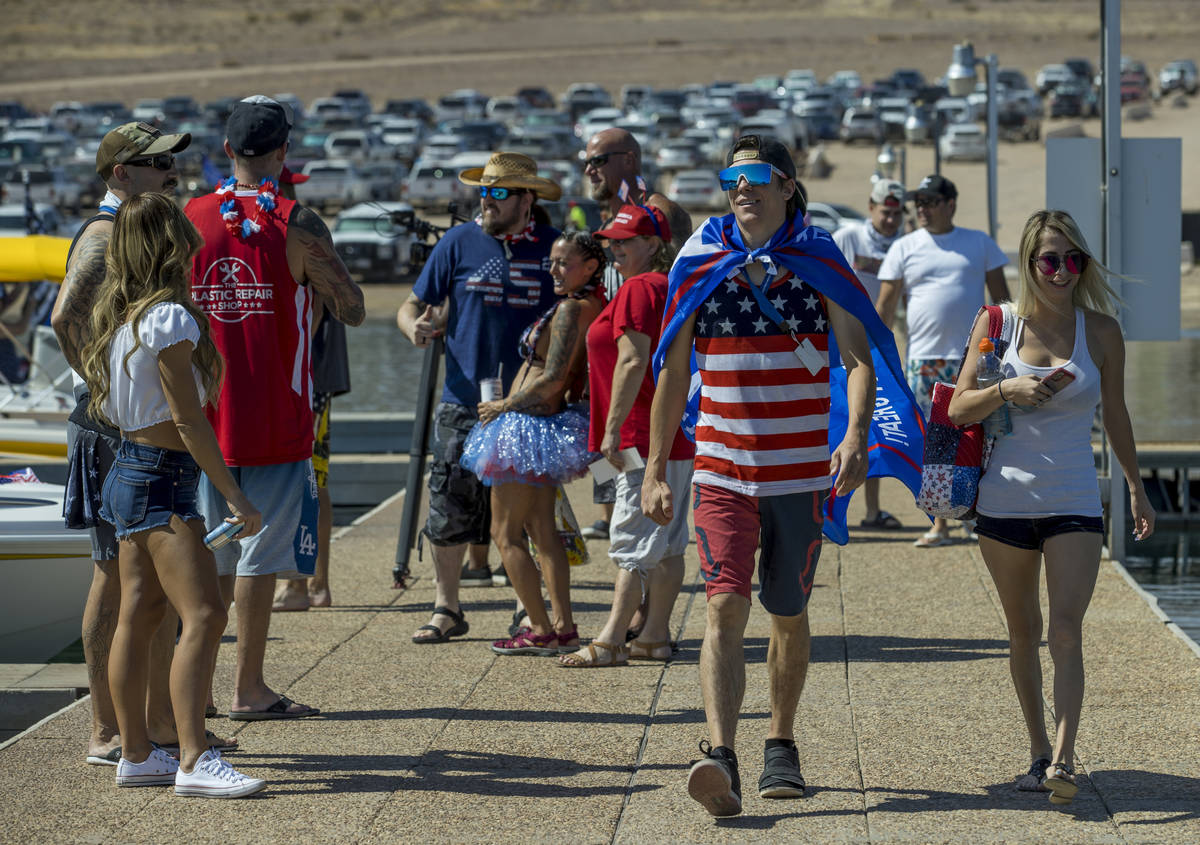 Robert Wyson, center, and Jessica Pappas arrive on the dock with others to take in preparations for the President Donald Trump boat parade at the Lake Mead Boat Harbor on Saturday, Sept. 12, 2020, near Boulder City. (L.E. Baskow/Las Vegas Review-Journal) @Left_Eye_Images 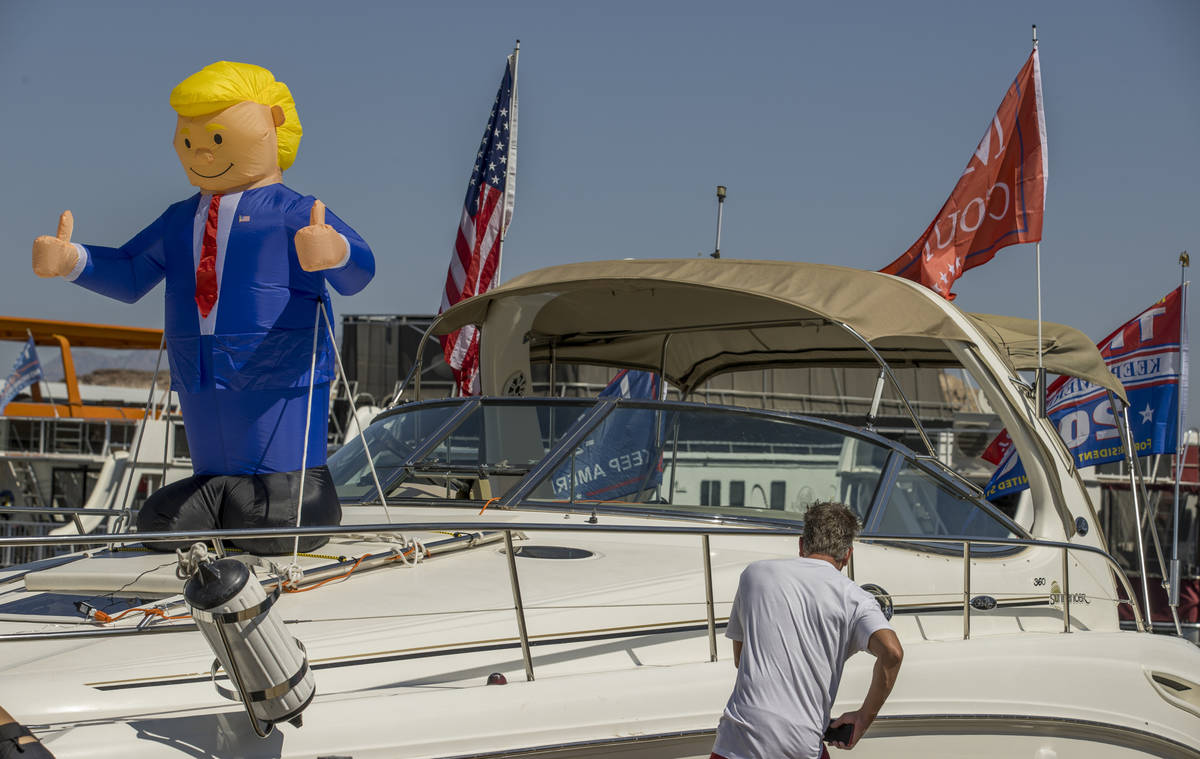 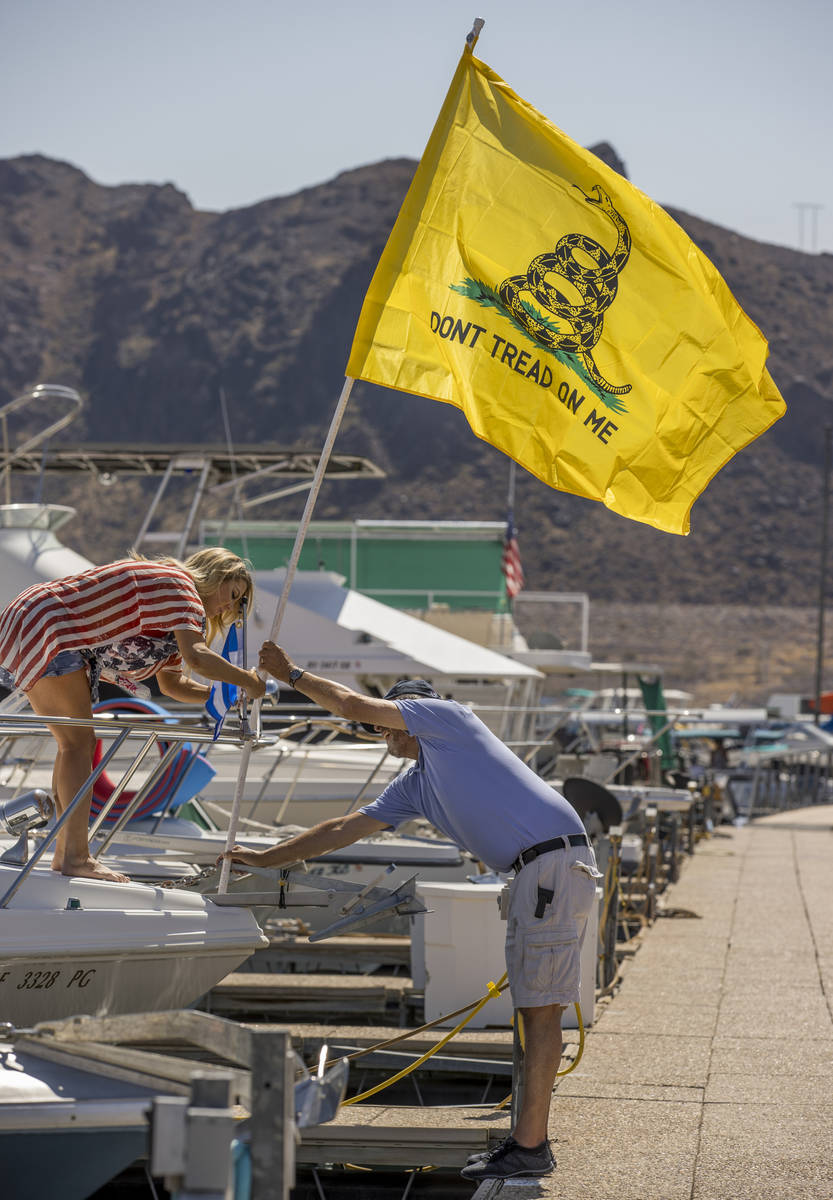 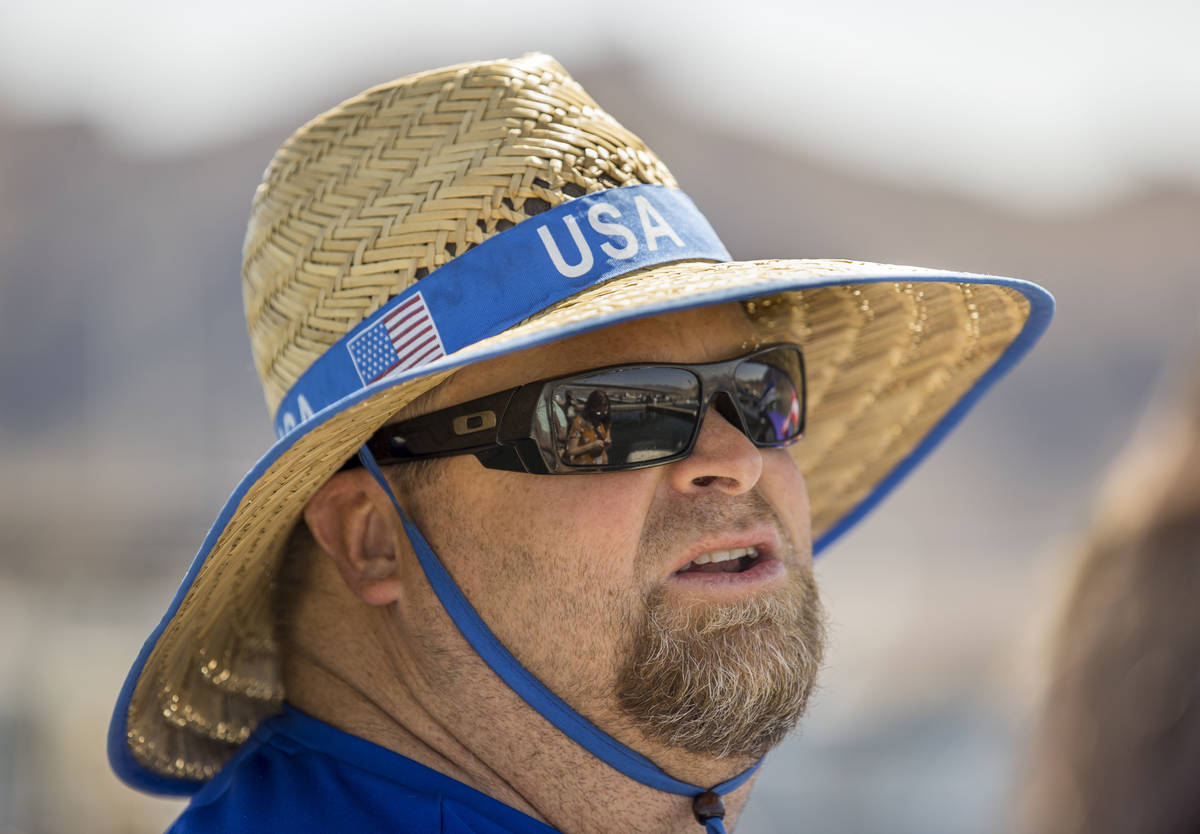 Seth Snyder is ready to leave the docks after preparing his boat for the President Donald Trump boat parade at the Lake Mead Boat Harbor on Saturday, Sept. 12, 2020, near Boulder City. (L.E. Baskow/Las Vegas Review-Journal) @Left_Eye_Images 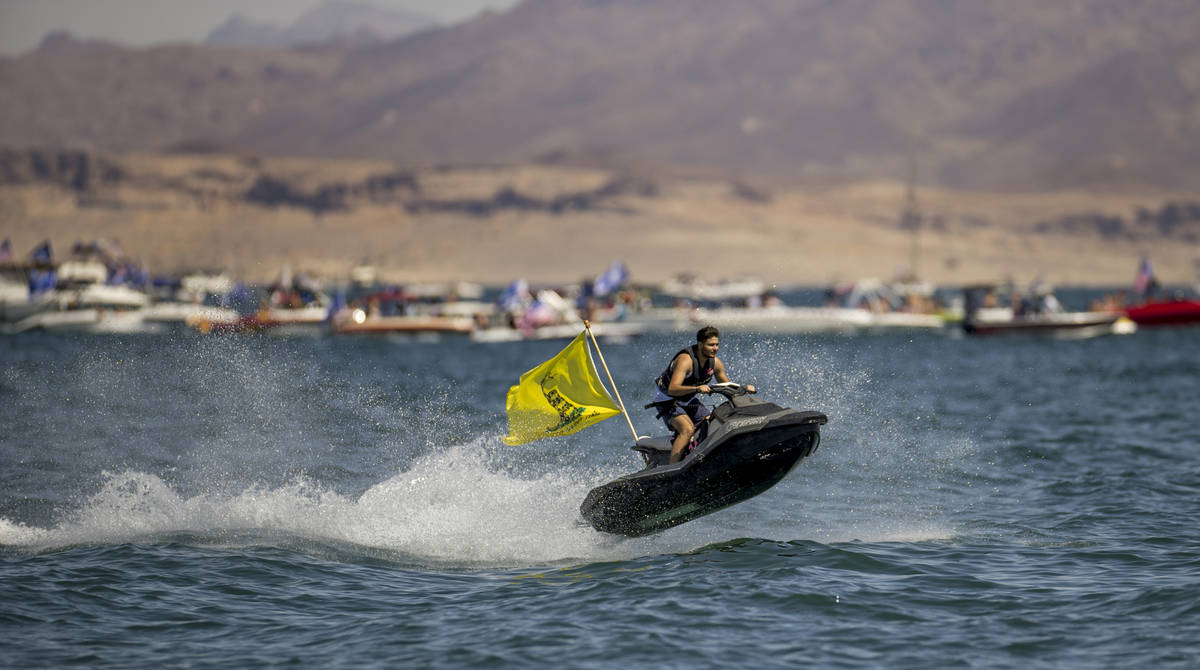 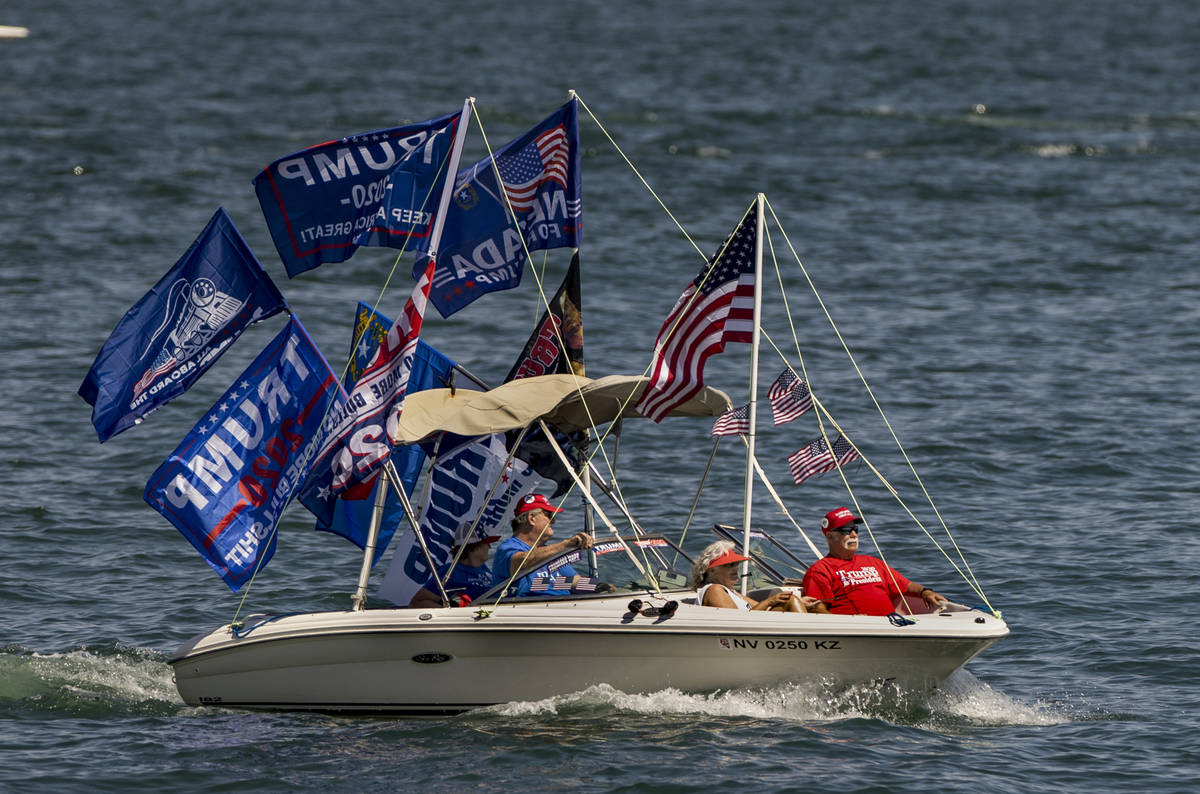 About 750 boats and jet skis were drawn to an hourlong parade Saturday afternoon across Lake Mead in support of President Donald Trump.

Lake Mead National Recreational Area spokeswoman Christie Vanover, who provided the estimated number of vessels “in and around the parade,” said the event started about 12:15 p.m., and the lead boat announced it was over about 1:10 p.m.

One boat took on water during the parade, and officials had to help the boaters to shore. No one was injured, Vanover said. It was not immediately clear why the boat started taking on water.

There were three other “boater assist” calls to officials, two before the parade and one during. None of the calls, which are normally due to mechanical errors, was for a serious incident, she said.

The group was granted a First Amendment permit on Friday to hold the large gathering at the Lake Mead National Recreation Area, Vanover said. The permit, which was scheduled to last until 3:30 p.m. was for up to 500 vessels.

“They were permitted until 3:30 p.m., and it appears once they reached the termination point on the parade route the organizer must have decided to call it,” Vanover said, later adding that although the gathering was larger than intended, officials couldn’t hold organizers responsible for more people than expected participating.

Boulder City resident Charles Coll said toward the end of the parade, the waves grew choppy and water started coming over his boat’s bow.

“It got rough and windy,” Coll said after the parade, as he sat in his boat with his family docked at Las Vegas Boat Harbor.

Although the official event ended earlier than expected, Coll said he still had a good time during the parade, which he said he attended “to support Trump.”

“Everybody was waving at everybody,” he said.

Brian Bandy, a Henderson resident who helped his friends organize the parade, said Friday that the event was to support Trump, but was also presented as a “patriot parade.”

A similar event last week in Texas caused trouble for boaters. On Sept. 5, five boats sank during a parade at Lake Travis, and deputies with the Travis County Sheriff’s Office had to respond to 15 distress calls, the Associated Press reported.

Officials said the water on the lake was calm, but the tightly packed boats created large waves in the Texas lake. No foul play was expected, and no one was injured.

On Friday, Bandy said he was concerned that conditions at Lake Travis could replicate at Lake Mead, so the boaters planned to stick to the open water and drive no faster than 6 mph.

As boaters gathered in the water west of the marina, those at the harbor made final preparations to launch. Seth Snyder stood outside his boat decorated with three full-sized flags — an American flag, a “Thin Blue Line” flag meant to support police officers, and a 2020 Trump campaign flag.

“Hopefully people can see all the support and love that we have for our president,” said the Henderson resident, who attended the parade with his sons and friends. “We need to make sure that we don’t get Biden in there.”

Although signs at the harbor announced that social distancing and face coverings were “mandatory,” Snyder and the majority of other boaters weren’t wearing masks Saturday.

Christine Snedden, who created a second Facebook event and merged her gathering with Bandy’s, said the parade was for people to come together during the pandemic. She was “not at all concerned” about catching the virus during the gathering, she said.

“People are starting to get really sick of the restrictions that the governor has placed,” said Snedden, wearing a red “Make America Great Again” hat, and an American-flag patterned swimsuit cover-up.

Officials with the National Parks Service, the Nevada Department of Wildlife and the U.S. Coast Guard monitored the parade, Vanover said.

Shortly after the parade ended, Vanover said it appeared to have been a “safe, uneventful” event.

During the parade, boaters cheered at each other as the line of vessels stretched into open water in front of the marina and Boulder Beach area.

Although they didn’t have access to their boat on Saturday, 73-year-old Clyde Parke and his wife hiked the shoreline near Boulder Harbor to watch the parade. They sat alone on the rocks while 74-year-old Phyllis Parke watched the boats through binoculars, and Clyde Parke took pictures.

Clyde Parke, who said he used to run the Lake Mead Fish Hatchery, knew how to access the remote shoreline to watch the distant boats. Phyllis Parke said they went through the effort on Saturday to show their support for Trump.

“We just hope everybody turns out and votes for Trump,” she said.