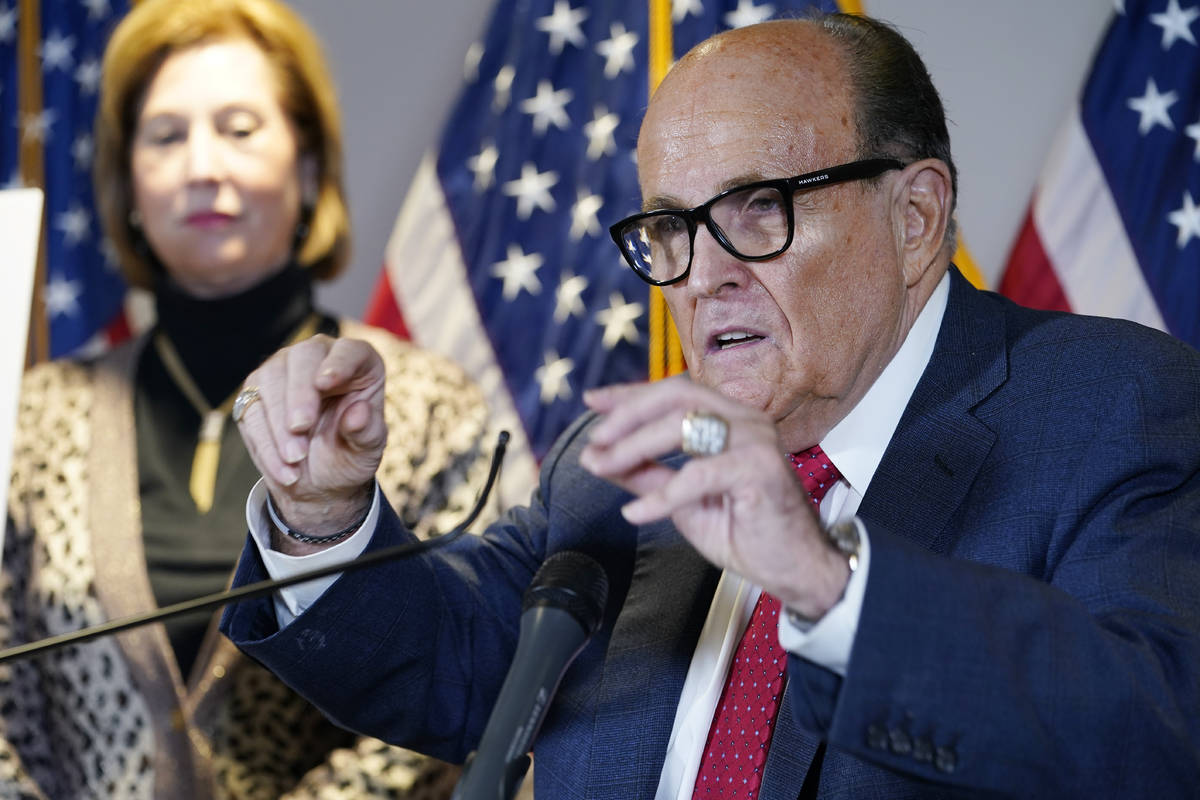 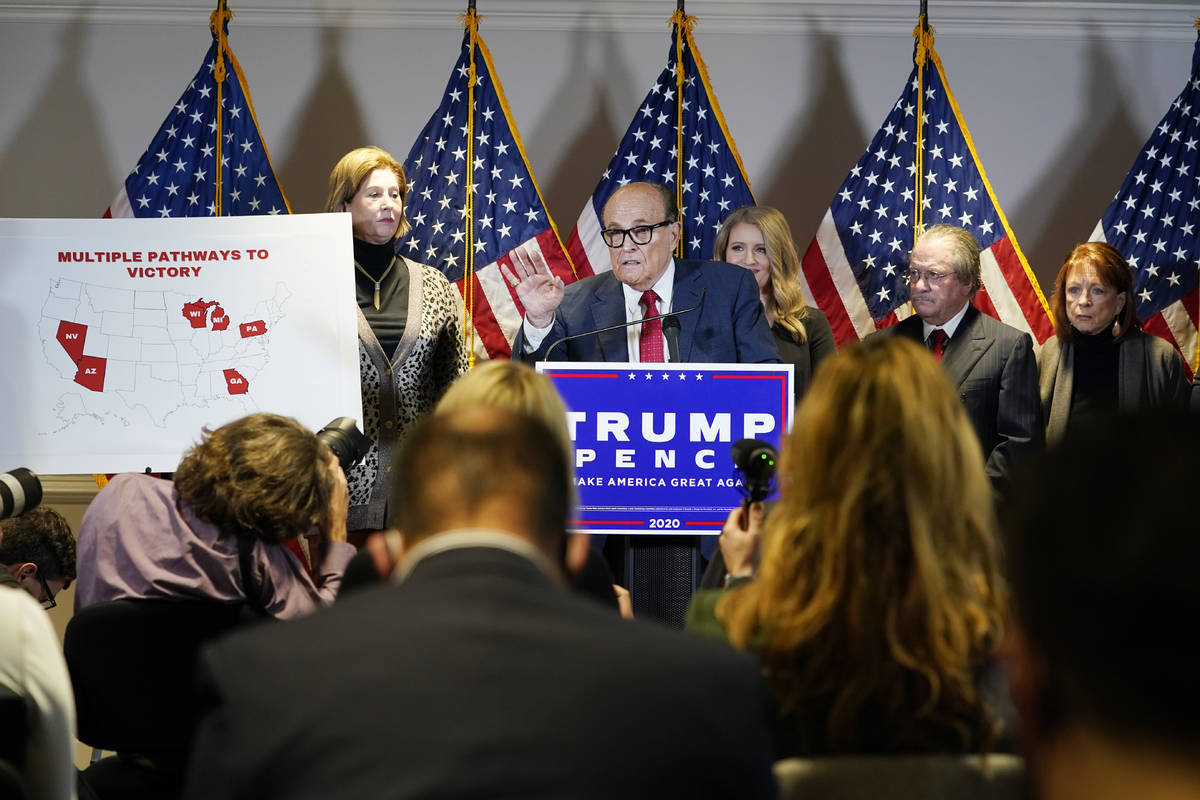 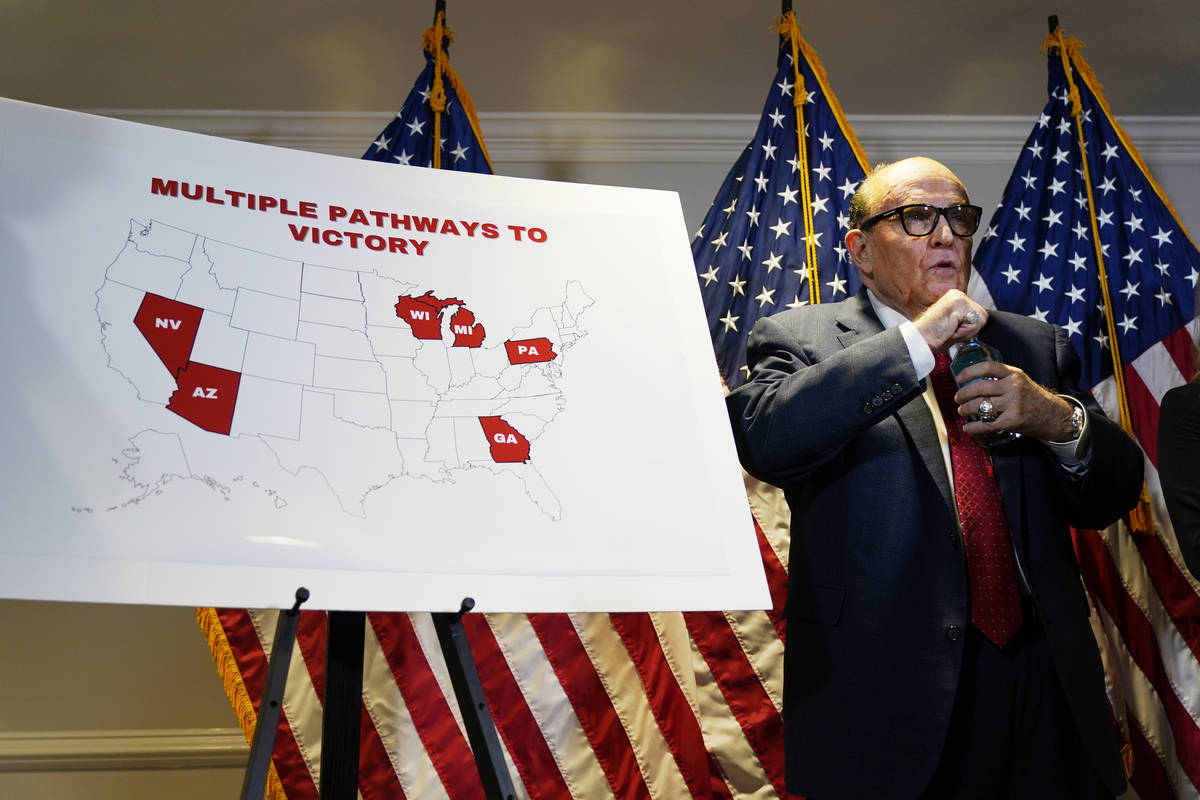 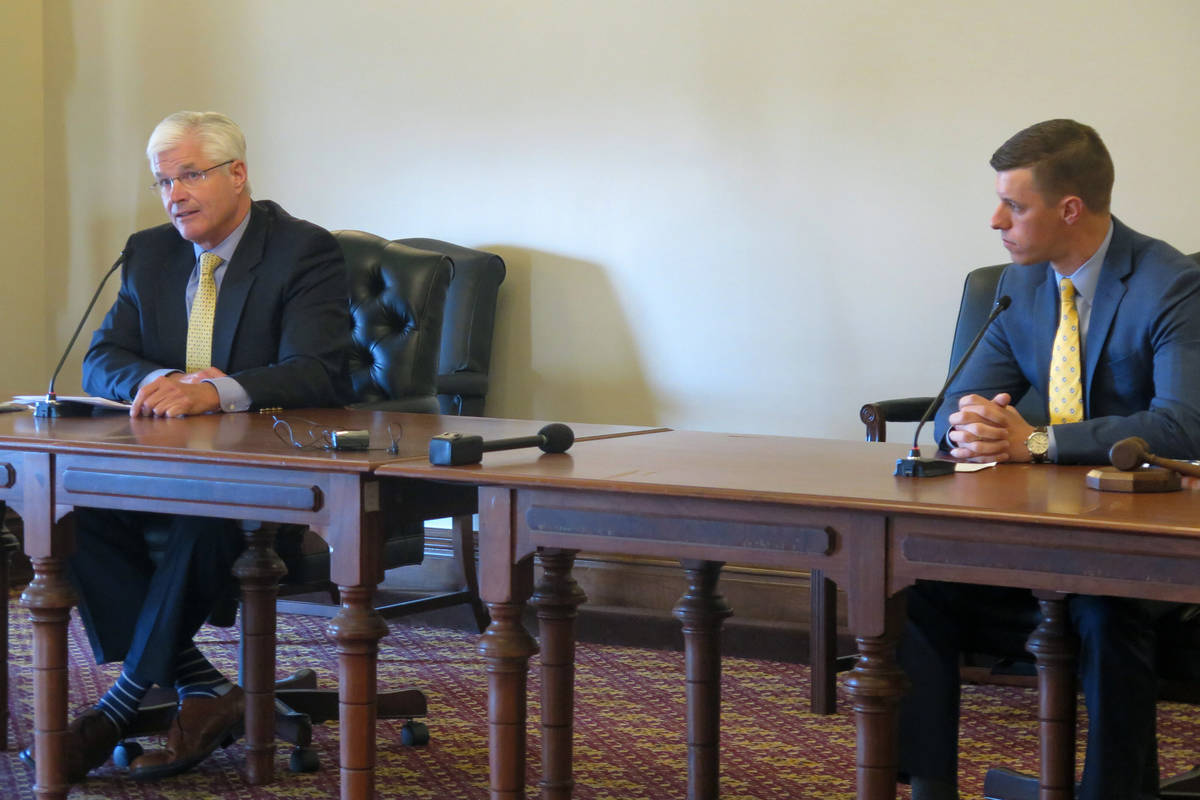 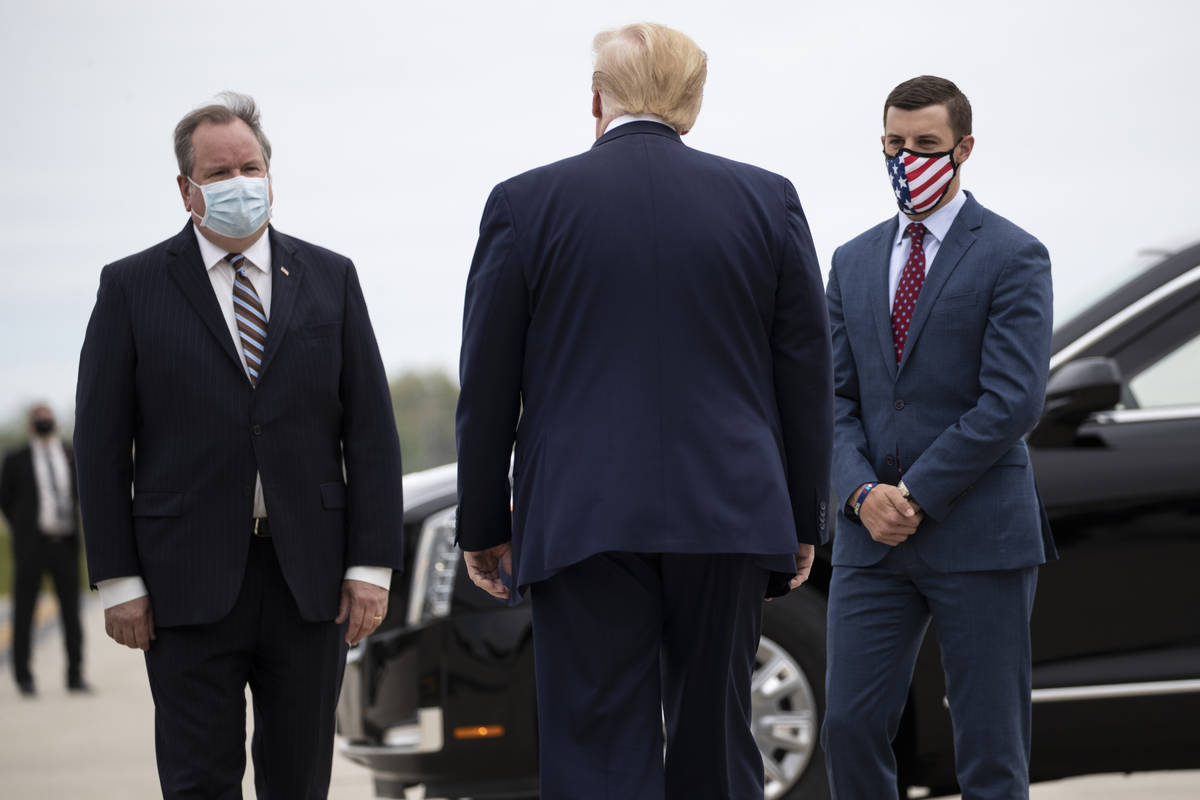 FILE - In this May 21, 2020, file photo, President Donald Trump is greeted by Kurt Heise, left, Supervisor of Plymouth Township, Mich., and Speaker Lee Chatfield, of the Michigan House of Representatives after stepping off Air Force One as he arrives at Detroit Metro Airport in Detroit. President Donald Trump summoned Michigan's Republican legislative leaders Chatfield and Senate Majority Leader Mike Shirkey, to the White House for a meeting Friday, Nov. 20, amid a GOP push to overturn the certification of Democrat Joe Biden's victory in the battleground state. (AP Photo/Alex Brandon, File)

WASHINGTON — Two Michigan state legislators headed to the White House on Friday as President Donald Trump made an extraordinary and sure-to-be futile attempt to block Joe Biden’s victory in the battleground state and subvert the results of the 2020 presidential election.

The state has yet to certify its results for Biden, who won Michigan by more than 154,000 votes, according to unofficial results. Trump and his allies have been trying to convince judges and lawmakers in the state to set aside the popular vote and swap in Republican-chosen electors.

The president personally called two county canvass board officials earlier this week who had refused to certify the results in Wayne County, the state’s most populous county and one that overwhelmingly favored Biden. The two GOP officials eventually agreed to certify the results, but following Trump’s call, they later said they had second thoughts.

As he departed Detroit for Washington on Friday morning, state Senate Majority Leader Mike Shirkey was swarmed by activists bearing signs that read: “Respect the Vote” and “Protect Democracy.” House Speaker Lee Chatfield was also headed to D.C., and protesters were expected in Washington, too.

White House press secretary Kayleigh McEnany said Trump’s meeting with the state legislators was “not an advocacy meeting” and insisted “he routinely meets with lawmakers from across the country.”

Some Michigan legislators have reported being deluged with calls and emails from Trump supporters demanding that they intervene. The House GOP caucus has prepared a 732-word stock response that pushes back, stating that state law clearly requires that electors be nominated by the party that wins the most votes.

“The law does not allow for the nomination or approval of alternative electors,” the email states.

The Michigan effort is among multiple last-ditch tactics Trump and his allies are using to challenge his defeat. His team also has suggested in a legal challenge that Pennsylvania set aside the popular vote there and pressured county officials in Arizona to delay certifying vote tallies. At the White House, discussions were underway about extending an invite to Pennsylvania’s Republican legislative leadership as well.

Election law experts see it all as the last, dying gasps of the Trump campaign and say Biden is certain to walk into the Oval Office come January. But there is great concern that Trump’s effort is doing real damage to public faith in the integrity of U.S. elections.

Sen. Mitt Romney of Utah, one of Trump’s most vocal GOP critics, accused Trump of resorting to “overt pressure on state and local officials to subvert the will of the people and overturn the election.” Romney added: “It is difficult to imagine a worse, more undemocratic action by a sitting American President.”

Trump’s own election security agency has declared the 2020 presidential election to have been the most secure in history. Days after that statement was issued, Trump fired the agency’s leader.

The increasingly desperate and erratic moves have no reasonable chance of changing the outcome of the 2020 election, in which Biden has now received more votes than any other presidential candidate in history and has clinched the 270 Electoral College votes needed to win.

But the Republican president’s constant barrage of baseless claims, his work to personally sway local officials who certify votes and his allies’ refusal to admit he lost is likely to have a lasting negative impact on the country. Legions of his supporters don’t believe he lost.

“It’s about trying to set up the conditions where half of the country believes that there are only two possibilities, either they win or the election was stolen,” said Justin Levitt, a constitutional law scholar and professor at Loyola Law School. “And that’s not a democracy.”

The two GOP canvassers in Michigan’s Wayne County said in a statement late Wednesday they lacked confidence that the election was fair and impartial. “There has been a distinct lack of transparency throughout the process,” they said. But there has been no evidence of impropriety or fraud in Michigan, election officials have said.

Trump’s allies have homed in on the way that the president’s early lead in Michigan and some other states on election night slipped away as later votes came, casting it as evidence of something nefarious.

But a massive influx of mail-in ballots because of the coronavirus pandemic leaned largely to Biden, who encouraged his supporters to vote by mail, and those votes were the last to be counted. So it appeared Trump had an edge when he really didn’t.

Michigan’s four-member state canvassing board, made up of two Democrats and two Republicans, is expected to meet Monday to determine the results of the election after receiving totals from all 83 counties. If it does not certify Biden’s victory, it is likely a court would order the members to do so.

The Michigan Legislature would be called on to select electors if Trump succeeded in convincing the board not to certify the results.

Biden legal adviser Bob Bauer said Trump’s efforts are harmful to democracy but have no chance of success, though he stopped short of characterizing the legality of them.

Trump personal attorney Rudy Giuliani and others held a press conference Thursday to allege a widespread Democratic election conspiracy involving multiple states and suspect voting machines. But election officials across the country have said repeatedly there was no widespread fraud.

There was a flurry of activity in battleground states, none of it promising for Trump.

In Pennsylvania, where the Trump campaign is challenging the election results in federal court, a legal team led by Giuliani suggested in a filing Wednesday that the judge order the Republican-led state legislature to pick delegates to the Electoral College, potentially throwing the state’s 20 electoral votes to Trump. A judge canceled an evidentiary hearing in the case.

In Arizona, the Republican Party is pressuring county officials to delay certifying results. The GOP lost a bid on Thursday to postpone certification in Maricopa County, the state’s most populous, and officials there are expected to certify elections results on Friday.

In northwestern Arizona, Mohave County officials postponed their certification until next week. Biden won Arizona by more than 10,000 votes, and Maricopa County put him over the top.

In Georgia, where officials have been auditing the results of the presidential race, Trump has repeatedly attacked the process and called it “a joke.”

He has also made repeated incorrect assertions that Georgia election officials are unable to verify signatures on absentee ballot envelopes. In fact, Georgia requires that they be checked.

The Associated Press called Biden the winner of Georgia and its 16 electoral votes on Thursday night.