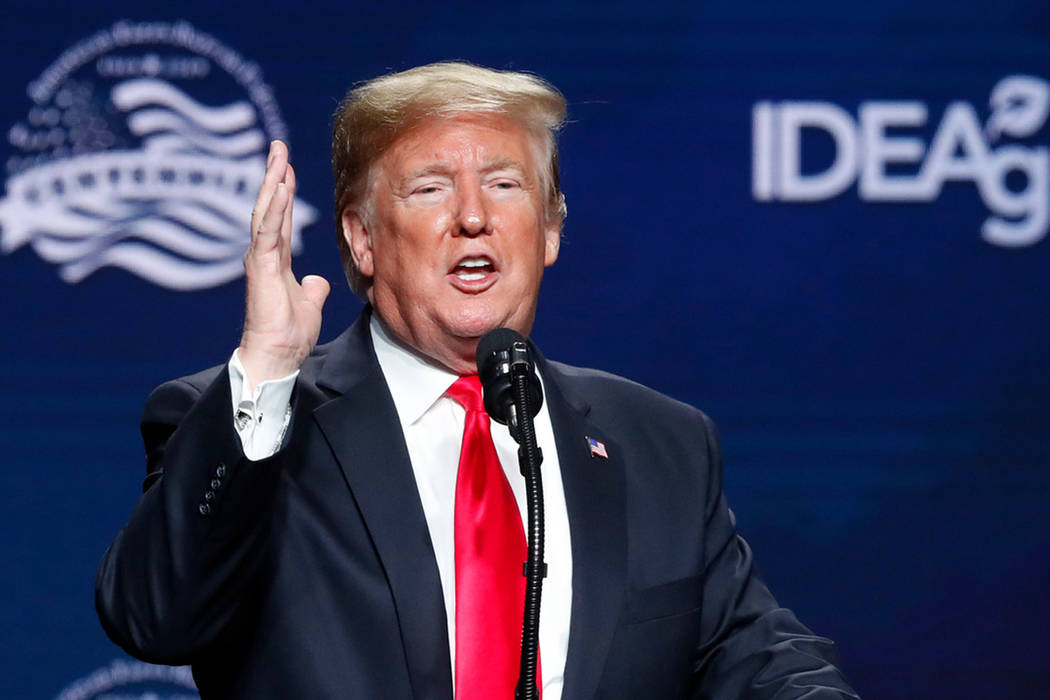 WASHINGTON — President Donald Trump closed the door Monday on a Republican proposal to end the longest government shutdown in U.S. history as Congress appears no closer to crafting a compromise that lawmakers and the White House could accept.

Sen. Lindsey Graham, R-S.C., urged Trump over the weekend to reopen the government for three weeks while negotiators continued to seek common ground and reach a deal that could provide funding for the president’s demand for a border wall.

Trump slammed the door on that idea, saying he did not want a delay, only a deal, as he blamed Democrats for failing to negotiate in good faith.

“The Democrats have to do something,” Trump told reporters at the White House before leaving for New Orleans to give a speech to a national farm group.

“They now control the House. Let’s see if they can lead. I don’t know that they can lead, but we’re going to soon find out,” Trump said.

House Speaker Nancy Pelosi, responding to Trump on Twitter said Republicans started the “Trump shutdown” and Democrats are trying to end it.

The truth? Republicans started the #TrumpShutdown — and Democrats are working to end it. @realDonaldTrump, it’s time for you to stop standing in the way of re-opening the government. Let the Senate vote! #EndTheShutdown pic.twitter.com/8Wn438DCfM

The House passed spending bills last week to open up federal departments that have been shuttered since Dec. 22. But Senate Majority Leader Mitch McConnell, R-Ky., has said he would not bring any legislation to the floor without an agreement by the president to sign it into law.

Pelosi put the blame squarely on Trump for keeping the government shut down over his wall demands.

“It’s time for you to stop standing in the way of re-opening the government. Let the Senate vote!” Pelosi said on the social media platform.

The shutdown hit day 24 on Monday with 800,000 federal workers idle or working without pay. Nevada lawmakers spent the week talking with those feeling the pinch of the shutdown, including Transportation Security Administration employees working without paychecks at McCarran International Airport in Las Vegas.

Trump forced the shutdown in December after refusing to sign a stop-gap bill to keep unfunded departments open until Feb. 8. Trump demanded $5.7 billion inserted into the Homeland Security spending bill for construction of a border wall, a campaign pledge that he claimed Mexico would finance.

Since then, Trump has had tumultuous meetings with Democratic leaders in the White House, who have rejected his border wall. The Senate has included $1.3 billion in its Homeland Security spending bill for fences and technology at the border.

Pelosi, D-Calif., has rejected more funding for a wall, calling it immoral and ineffective.

Trump has repeatedly threatened to declare a national emergency at the border, and bypass Congress to find unspent money in military construction and disaster accounts to begin wall construction. A declaration would likely draw a legal challenge on constitutional grounds.

Although Trump is blaming Democrats for the shutdown, a recent ABC-Washington Post poll showed 53 percent of people blamed Trump and congressional Republicans for the shutdown, 29 percent blamed Democrats and 13 percent had no opinion. The margin of error was plus or minus 4.5 percentage points.

There are roughly 3,500 federal workers in Nevada furloughed or working without pay.

The House and Senate passed legislation last week that would provide back pay for federal workers after the shutdown ends. Trump has vowed to sign the bill and said federal workers would get their money.

Historically, federal contractors have not received back pay for services not performed during a government shutdown, and small businesses that rely on federal workers and contractors as customers are feeling the squeeze as the shutdown moves into another week.

Another group hard hit by the shutdown is America’s farmers. The shutdown includes the U.S. Department of Agriculture, which oversees nutritional programs and food stamps, as well as farm subsidies and loans.

eeks in which State farm groups have urged the Trump administration and Congress to end the shutdown, noting its impact, along with tariffs the administration has imposed on foreign countries, have disproportionately hurt growers and livestock producers.

Trump told the farmers that there is a humanitarian crisis at the border, where women and children were subject to exploitation and danger.

“We’ll get that stopped,” Trump said. “We’re going to have a wall.”

Pelosi said that “instead of wasting farmers’ time with empty words, the president should restore certainty to their lives by signing the bipartisan legislation that House Democrats just passed to re-open the Department of Agriculture.”

As Congress returned from the weekend, it appeared lawmakers were no closer to hammering out an agreement that would pass muster with the president and House Democrats.