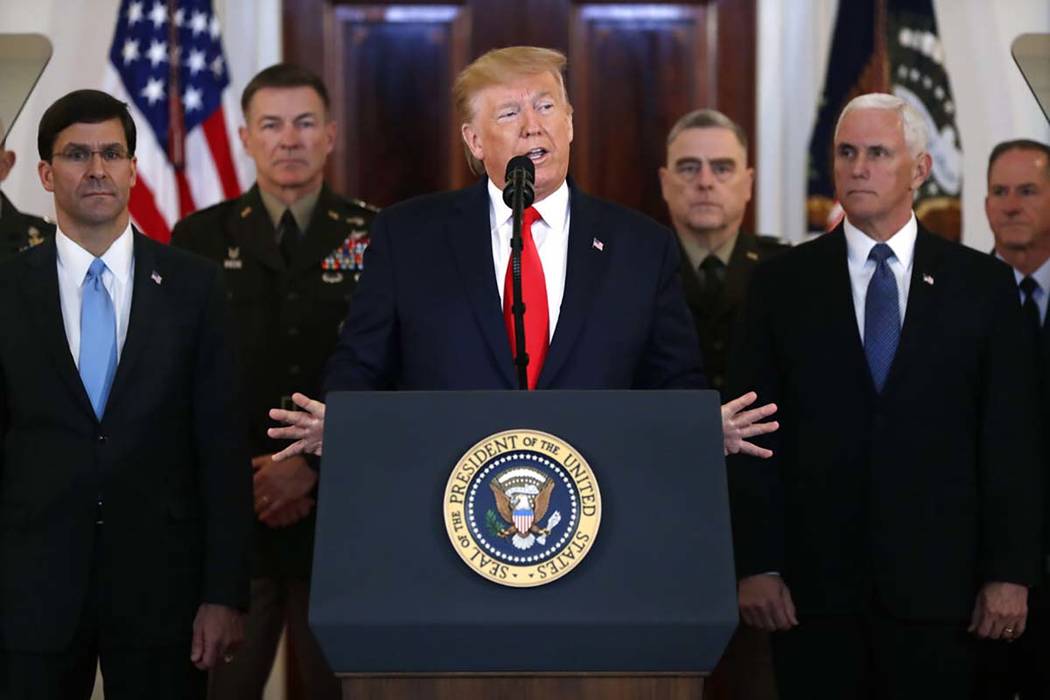 President Donald Trump addresses the nation from the White House on the ballistic missile strike that Iran launched against Iraqi air bases housing U.S. troops, Wednesday, Jan. 8, 2020, in Washington, as Vice President Mike Pence and others looks on. (Evan Vucci/AP) 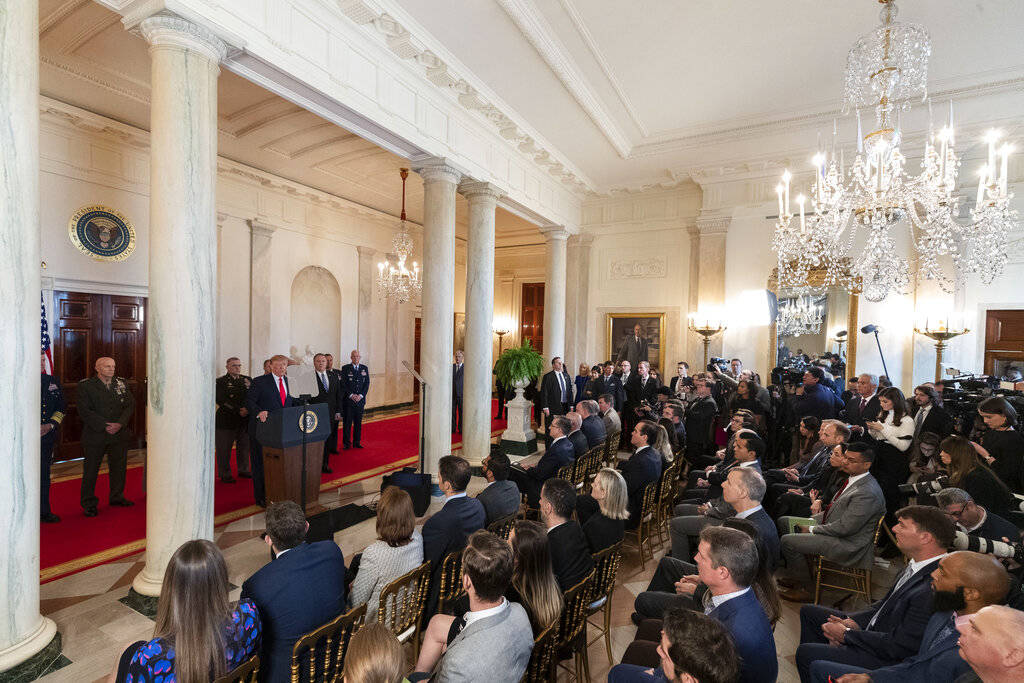 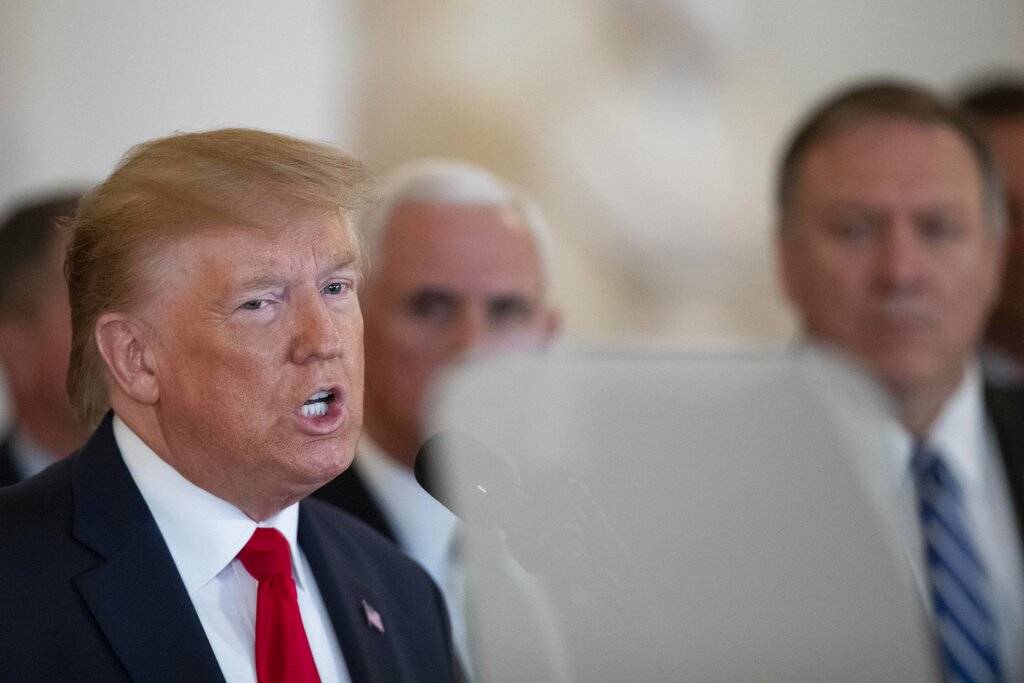 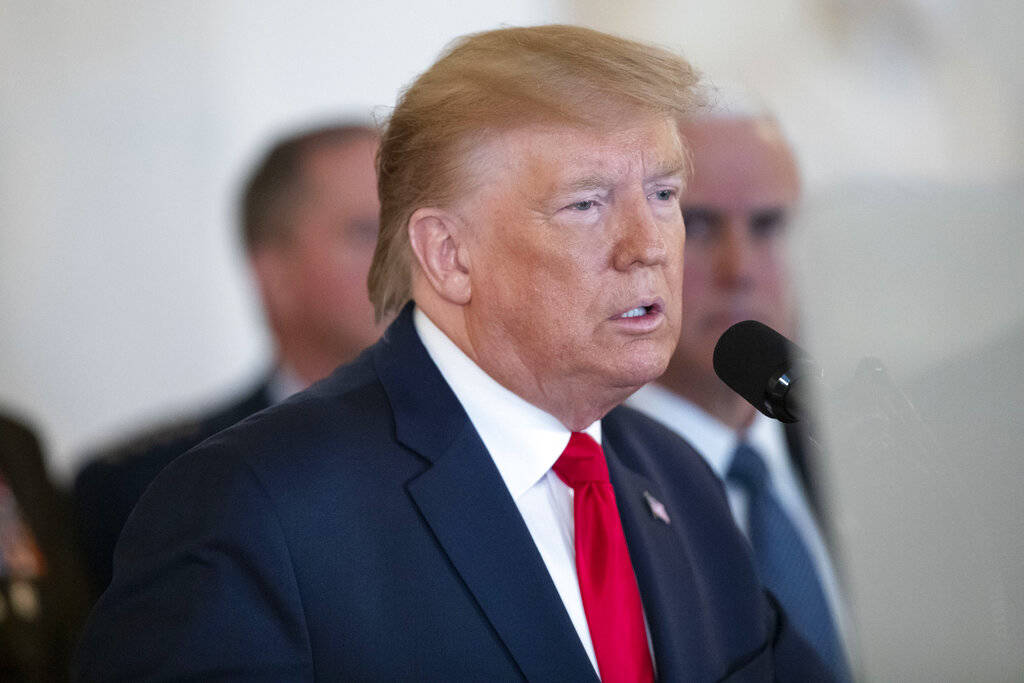 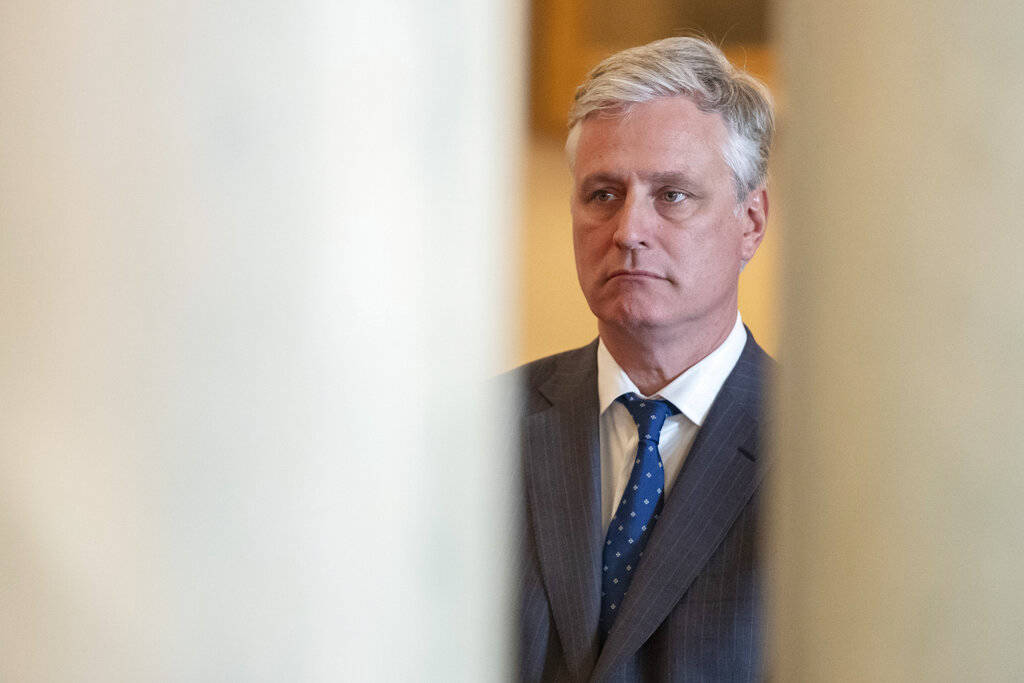 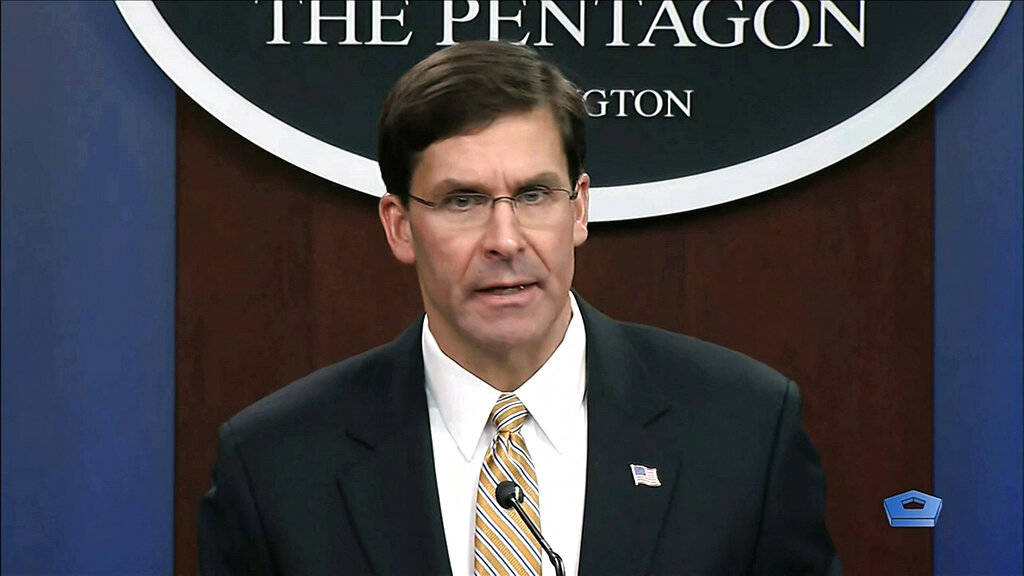 Secretary of Defense Mark Esper talks to the press on Iran and Iraq, Tuesday, Jan. 7, 2020, at the Pentagon in Washington. (divids via AP) 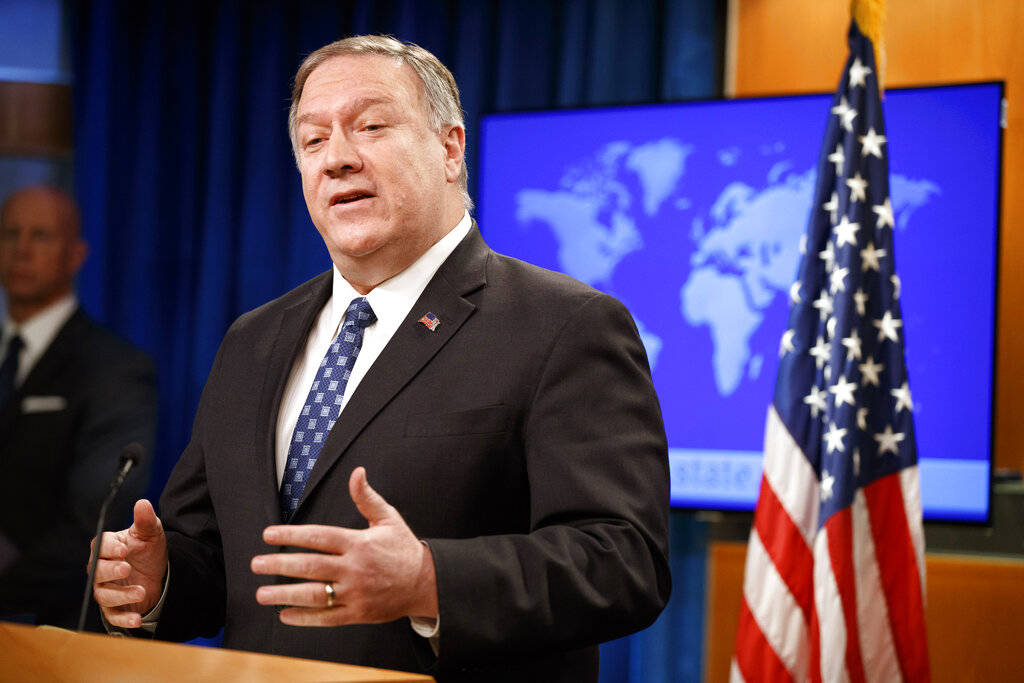 WASHINGTON — President Donald Trump said the days of nations tolerating “Iran’s destructive and destabilizing behavior” in the Middle East are over, and he proposed new “powerful sanctions” against the country.

For Trump, there was a sense of vindication in his remarks, delivered in the East Wing’s Grand Foyer the morning after Iran launched missiles against U.S. and coalition air bases in Iraq, in which he said, “Iran appears to be standing down.”

Iran’s failure to wage a deadly retaliation to Trump’s order authorizing the drone attack that killed Gen. Qassem Soleimani, Iran’s top terror mastermind, demonstrated the president could throw away the playbook adopted by predecessors Barack Obama and George W. Bush, who chose not to assassinate Soleimani when presented with the opportunity because they feared the consequences.

Republican Jewish Coalition executive director Matt Brooks argued that Trump made the right decision. “We can’t be handcuffed,” Brooks told the Las Vegas Review-Journal as he defended the United States’ need to assert its self-defense.

On the other side of aisle, Rep. Gerry Connolly, D-Va., emerged from a briefing with administration officials and said they made “no case” for the argument that an Iranian-sponsored attack was imminent.

“It was sophomoric and utterly unconvincing,” Connolly told reporters.

The Trump administration has asserted that, in addition to planning imminent attacks, Soleimani, as head of Iran’s terrorist Quds Force, was responsible for the deaths of American soldiers. The drone strike came after the U.S. Embassy compound in Baghdad was subjected to attacks by Iranian-backed militias in late December. It also cited the killing of an American contractor in Iraq on Dec. 27.

House Speaker Nancy Pelosi, D-Calif., announced Wednesday that the House would vote on a war powers resolution that would limit the president’s military powers regarding Iran.

After a briefing with administration officials, two Republican senators — Mike Lee of Utah and Rand Paul of Kentucky — told reporters they would support the war powers measure. Lee said it was “the worst briefing” on a military issue he had experienced as a senator.

“I walked into the briefing undecided. I walked out decided,” he told reporters.

Flanked by Vice President Mike Pence, Secretary of State Mike Pompeo and Defense Secretary Mike Esper, Trump began his 11 minutes of remarks with the bald declaration, “As long as I am president of the United States, Iran will never be allowed to have a nuclear weapon.”

It was a shot across Tehran’s bow, tempered with Trump’s stated preference for a “deal that allows Iran to thrive and prosper, and take advantage of its enormous untapped potential.”

Trump had two big reasons to milk the moment.

First, no Americans were harmed Tuesday night — which prompted many observers to conclude Iran did not want to provoke a U.S. military response by killing Americans.

“I’m not certain that they’re done. I hope they are,” said Brian Katulis, a Center for American Progress senior fellow who served in President Bill Clinton’s administration.

“So maybe they’re done in that sort of narrow sense of this ladder of escalation in reaction to Soleimani,” Katulis said, but that does not mean proxies won’t engage in covert operations or cyberattacks.

Democrats charged that Trump’s decision to kill Soleimani had left the United States more vulnerable to Iranian retaliation. Rep. Ilhan Omar, D-Minn., told reporters that Americans are no safer today than they were yesterday.

Katulis said that he is not one of those Democrats who “sound like Iran’s lawyer,” but he can’t shake the feeling that Trump is “a man without a plan still kind of trying to make things up as he goes along.”

It doesn’t help that Trump “remains a man of two impulses,” Katulis added — to get U.S. troops out of the Middle East, and to make Iran buckle under his “maximum pressure” economic sanctions.

‘He proves them all wrong’

In an editorial, the left-leaning publication The Nation argued that the Soleimani attack was an act of war. “We are already deep in the bloody jaws of disaster. What matters now is getting out — as quickly as possible.”

But House Minority Whip Steve Scalise, R-La., asked, “How many more Americans did Soleimani need to kill before somebody’s going to support him finally being taken out and removed from this planet?”

Brooks compared Trump’s decision to kill Soleimani to his decision to recognize Jerusalem as the capital of Israel and move the U.S. Embassy there.

Brooks blamed “Trump Derangement Syndrome” for prodding critics to predict the worst. “They try to make the case that he doesn’t know what he’s doing, and time and again, he proves them all wrong.”