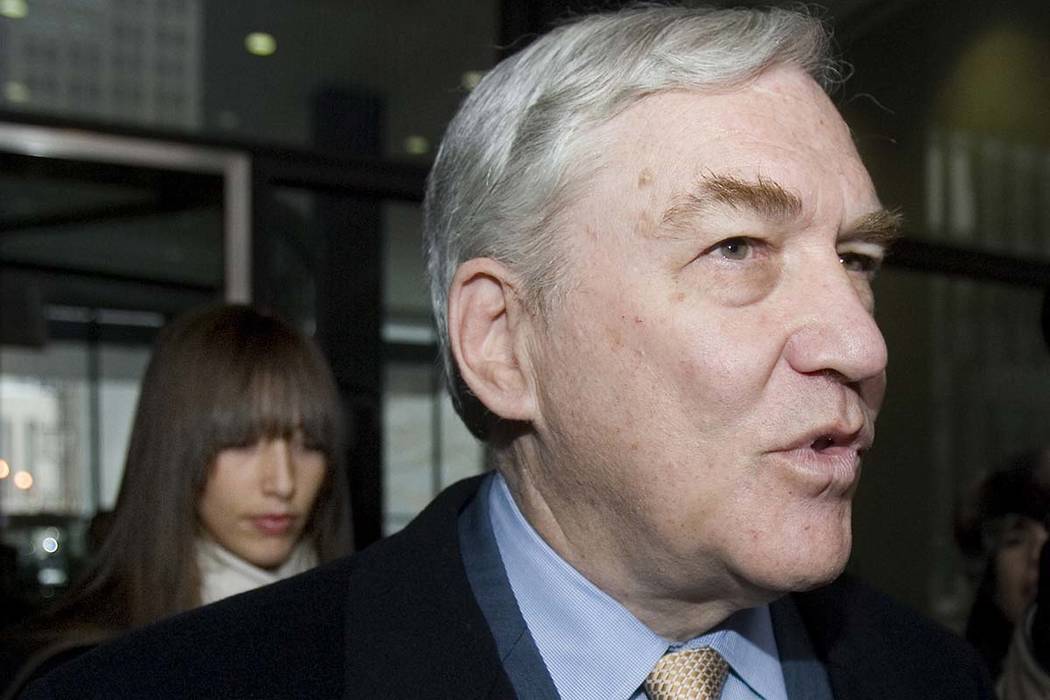 Conrad Black, who was found guilty of obstruction of justice and other charges, leaves with his daughter Alana, rear, following his sentencing hearing at the Federal District Court in Chicago, Monday, Dec. 10, 2007. President Donald Trump issued a full pardon to Black on Wednesday. (AP Photo/The Canadian Press, Tom Hanson)

WASHINGTON — President Donald Trump issued a full pardon Wednesday for Conrad M. Black – the one-time newspaper baron and author of the 2018 book, “Donald J. Trump, A President Like No Other.”

In 2007, a Chicago jury found Black guilty on three counts of mail fraud and one count of obstruction of justice in a complicated case that involved Black and others defrauding investors in Black’s company Hollinger International of some $6 million. At the time Black was sentenced to 6½ years in prison.

In 2010, after the U.S. Supreme Court curtailed the “honest services” laws used to convict Black and three associates, the 7th Circuit Court of Appeals overturned two of Black’s fraud convictions, but upheld two others.

All told, Black served 27 months at the Federal Correctional Institution in Coleman, Florida.

Now living in Toronto, Black, has been barred by law from returning to the United States. A Canadian native turned British peer, Black became Lord Black of Crossharbor in 2001.

Trump and Black are longtime friends and business associates with much in common – both larger-than-life figures with an appreciation for luxury and love of displaying their supersize success.

Like Trump, Black is a septuagenarian who moved in the same high-rise social circles and owned property in Midtown Manhattan and Palm Beach, Florida. Black ran a newspaper empire that included The Daily Telegraph in the United Kingdom, the Jerusalem Post, the Chicago Sun-Times and The National Post in Canada. Black continues to write a column for the National Post.

At one point in time, Trump was expected to testify at Black’s trial – as a witness who could confirm Black’s contention that a $62,000 birthday party he threw for his wife, Barbara Amiel, was a business expense. Black billed Hollinger for a healthy chunk of the party’s tab. Black’s attorneys, however, decided not to call Trump to the stand.

Last May, Trump gave a full pardon to Dinesh D’Souza, who had pleaded guilty to violating federal campaign finance law in 2014, because Trump tweeted, “He was treated very unfairly by our government!”

The Department of Justice Pardon Attorney lists no current pardon application for Black submitted through official channels, but then Trump largely has ignored that bureaucracy as he has issued eight full pardons and commuted the sentences of four other federal offenders.

The Constitution gives the president unfettered power to issue pardons for crimes against the United States, without interference by Congress. This allows a chief executive to exercise mercy and provide a balance for prosecutorial overreach.

On May 6 Trump pardoned former Army Lt. Michael Behenna, who had served five years for killing an al Qaeda suspect in U.S. custody. Behenna claimed that he acted in self-defense.

Trump also pardoned Pat Nolan Thursday. A former Republican lawmaker from California, Nolan, who served 29 months in prison for racketeering, said those in the Department of Justice have a vested interest in protecting their prosecutions. Nolan,who became a fierce advocate for prison reform, was in the room when Trump signed the landmark criminal justice reform measure, The First Step Act.

The Behenna pardon was the first act of clemency Trump granted after a 10-month hiatus. The Black pardon, the second this month, is likely to spur speculation that there will be more in short order.

Last year, Black brushed off the notion that he was seeking a pardon when he told the Guardian, “There is, at this point, no thought of a pardon whatsoever.”