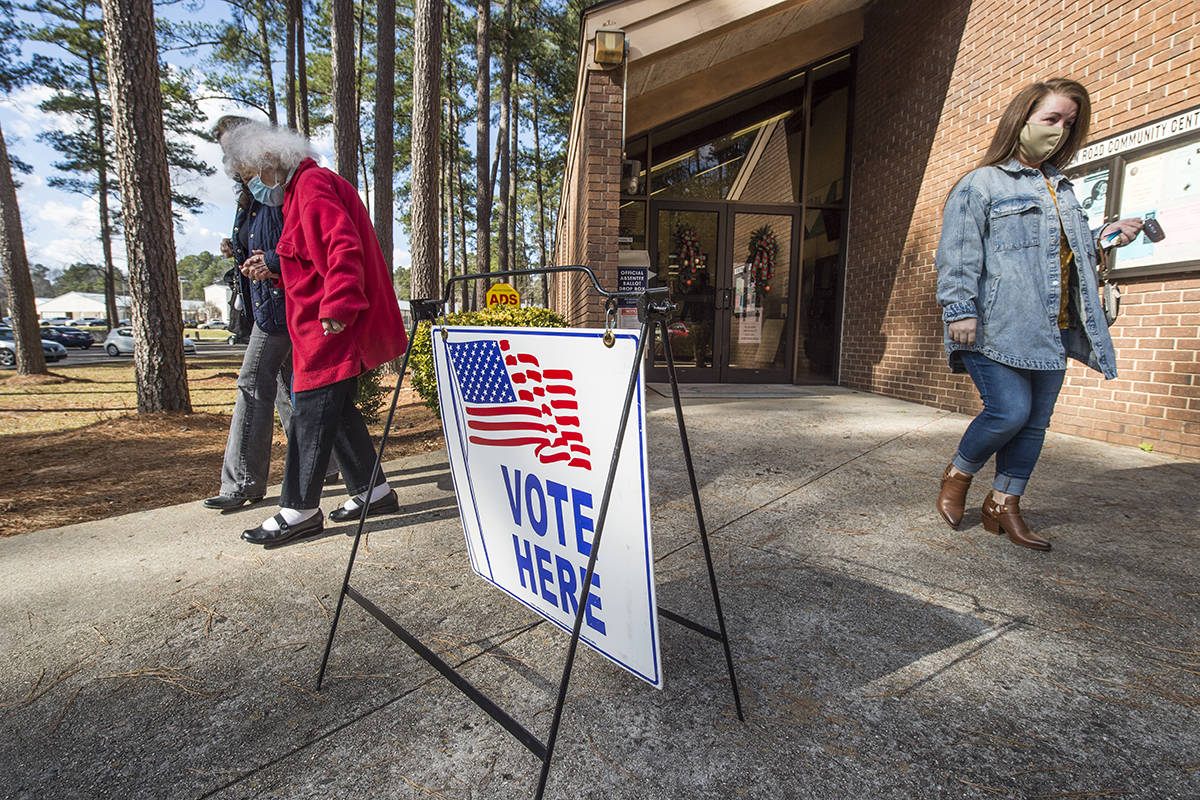 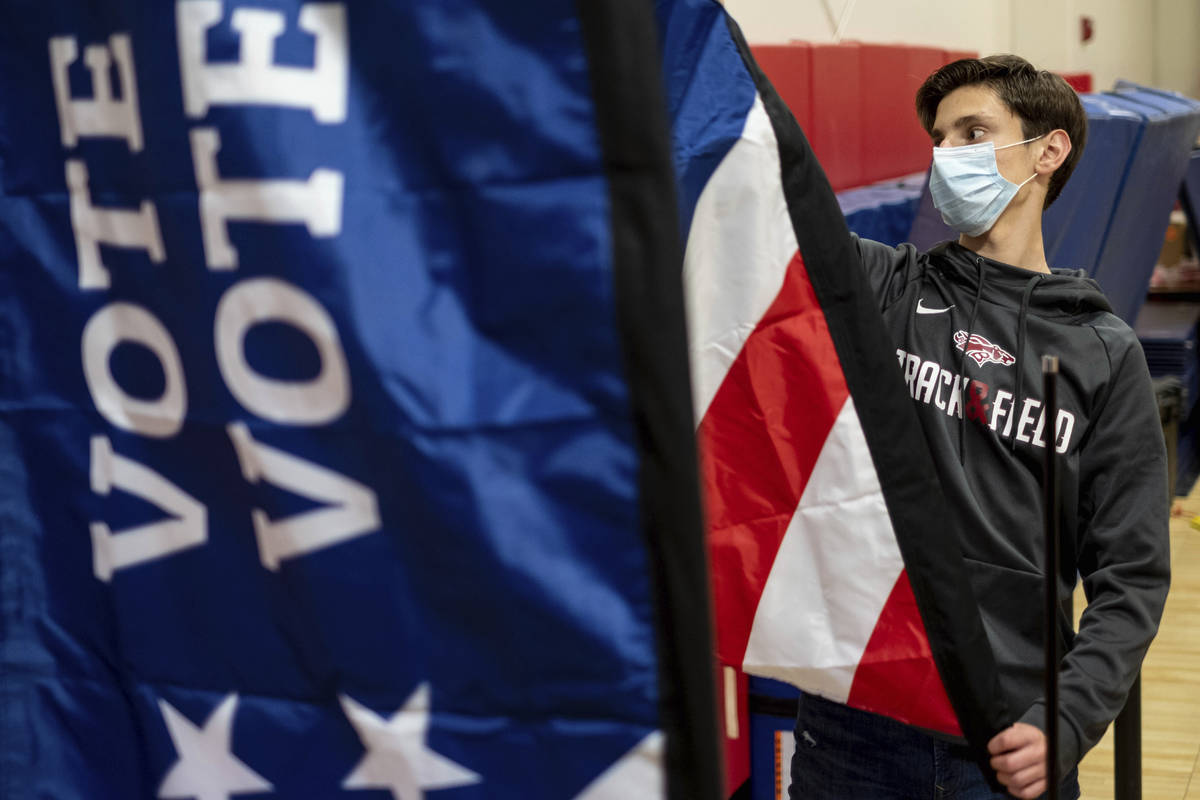 Thomas Hedrich sets up voting flags at a polling location in Gwinnett County, Ga., outside of Atlanta on Monday, Jan. 4, 2021, in advance of the Senate runoff election. (AP Photo/Ben Gray) 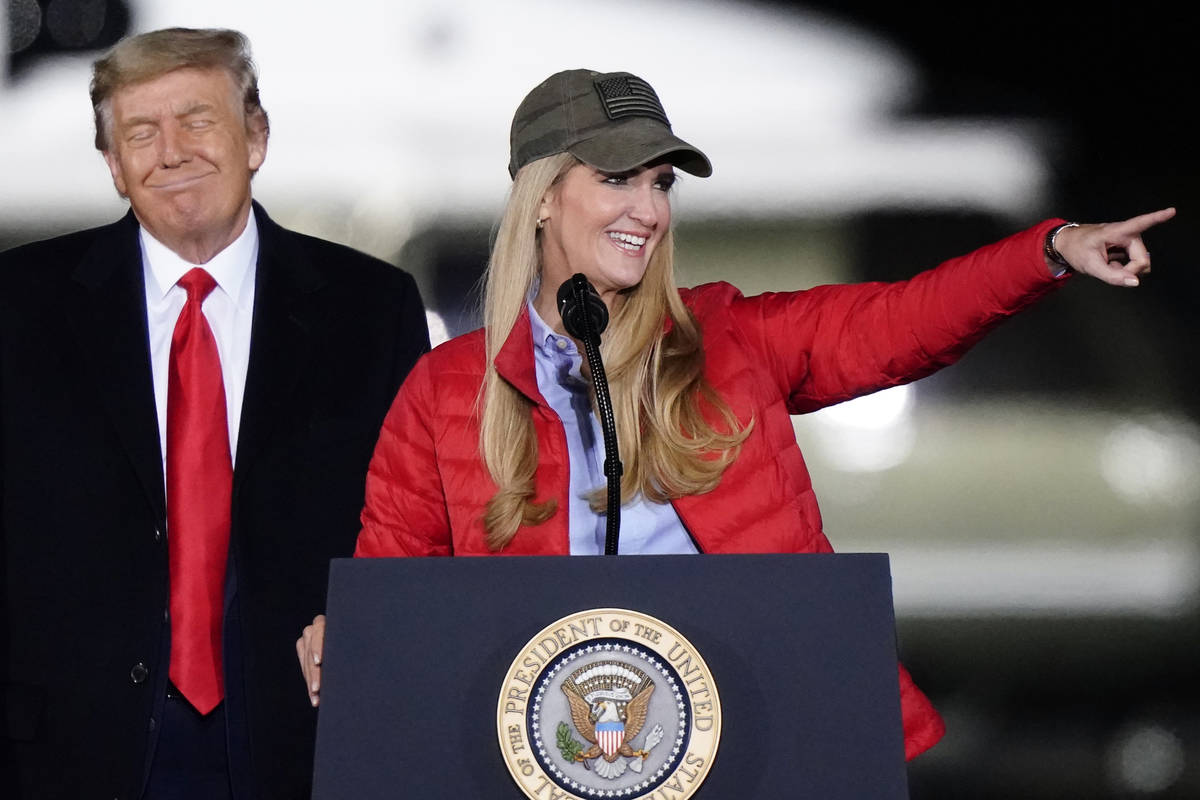 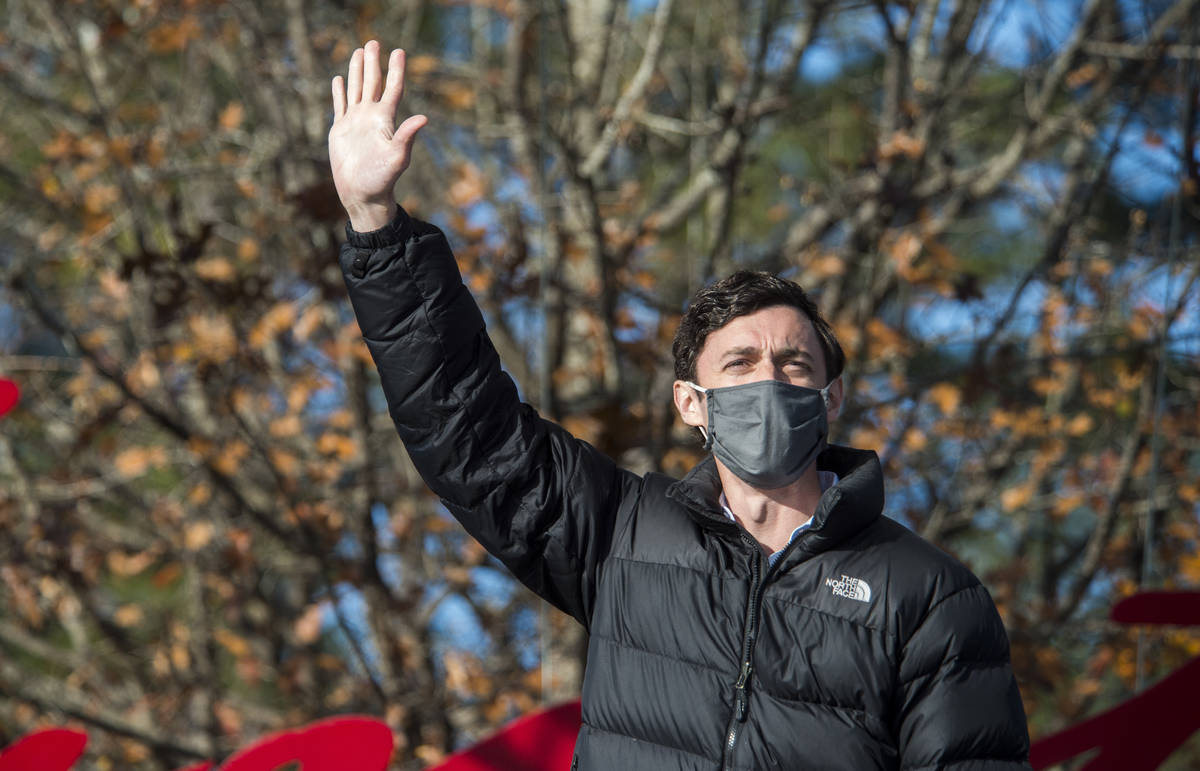 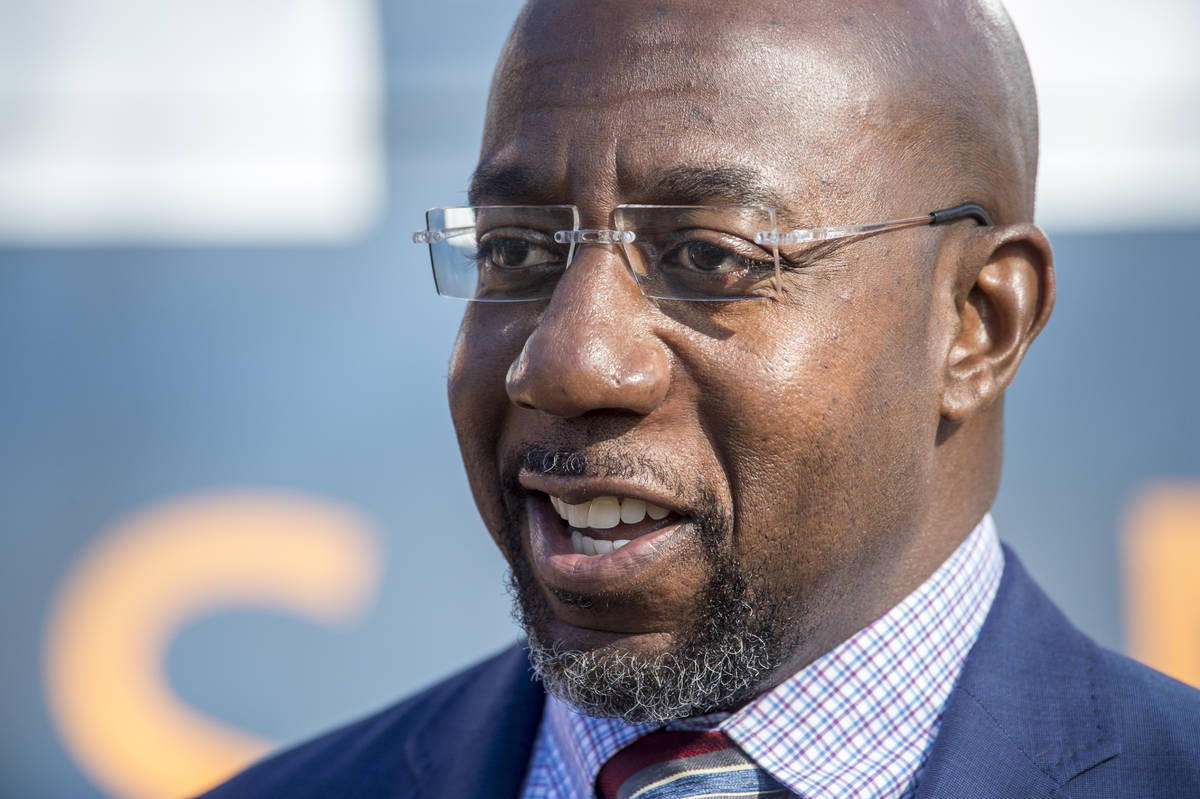 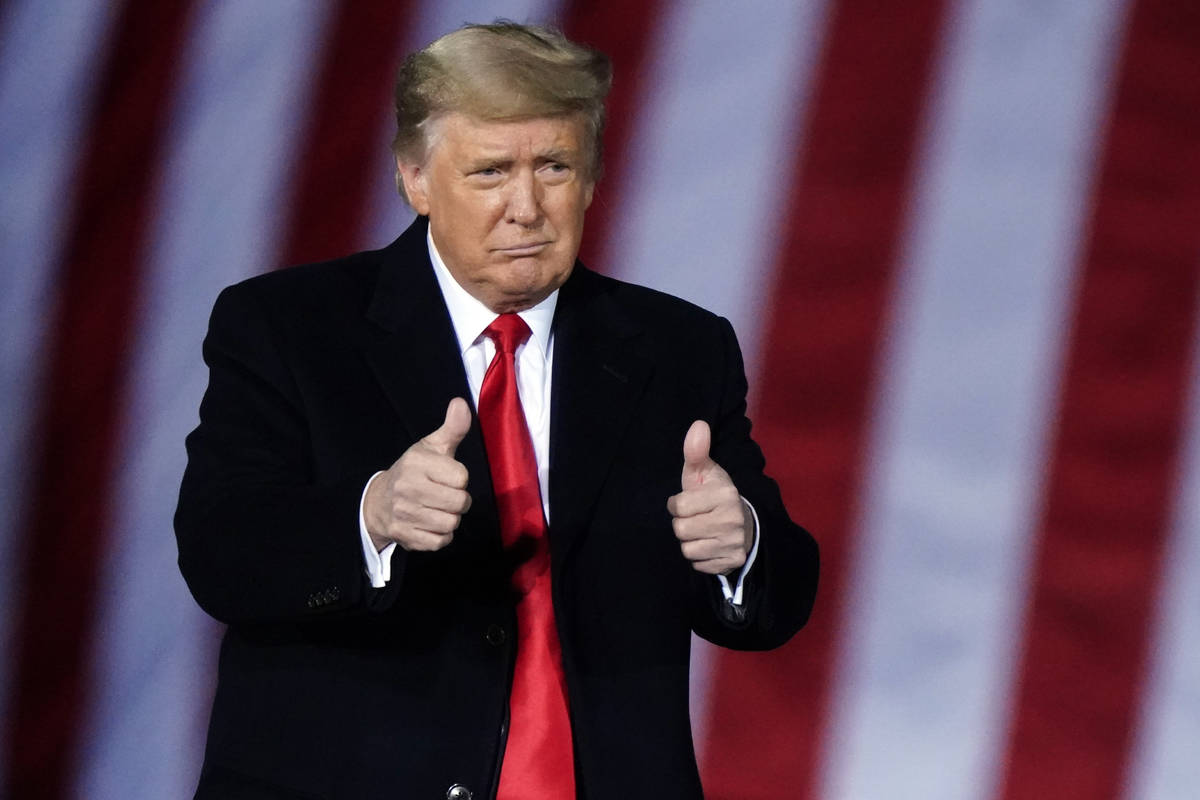 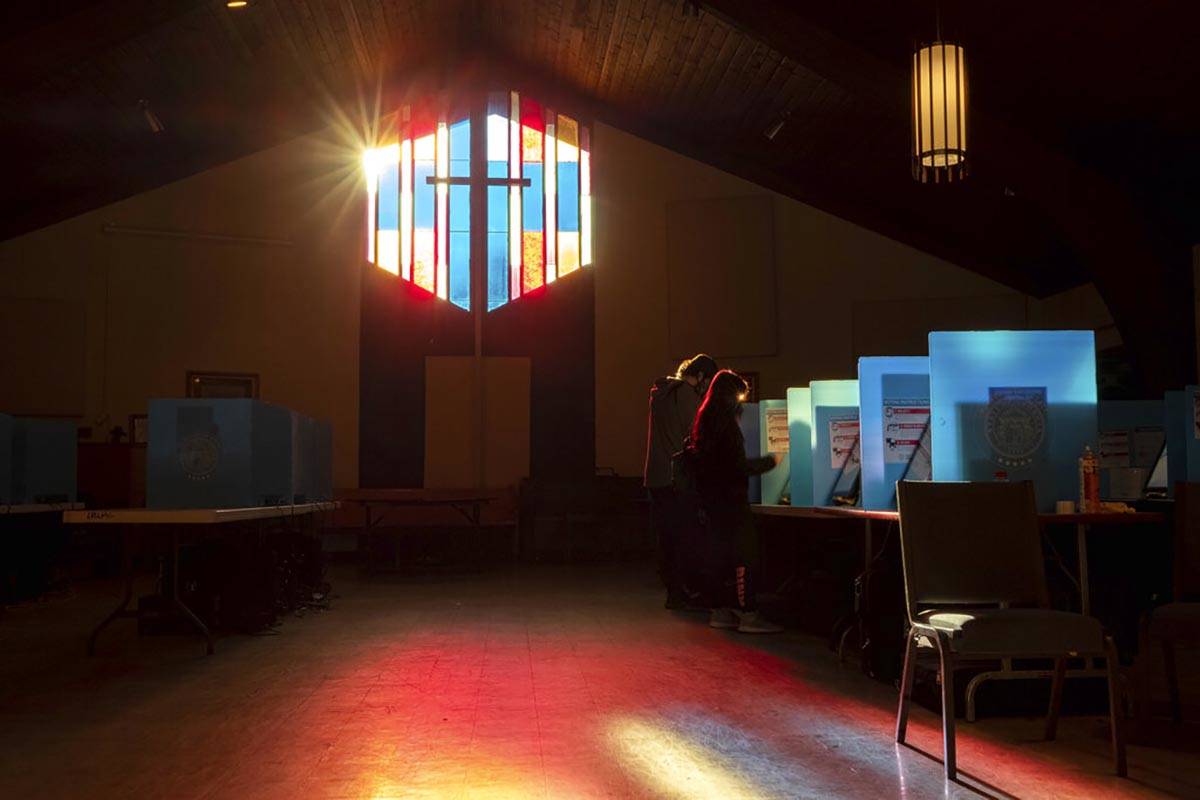 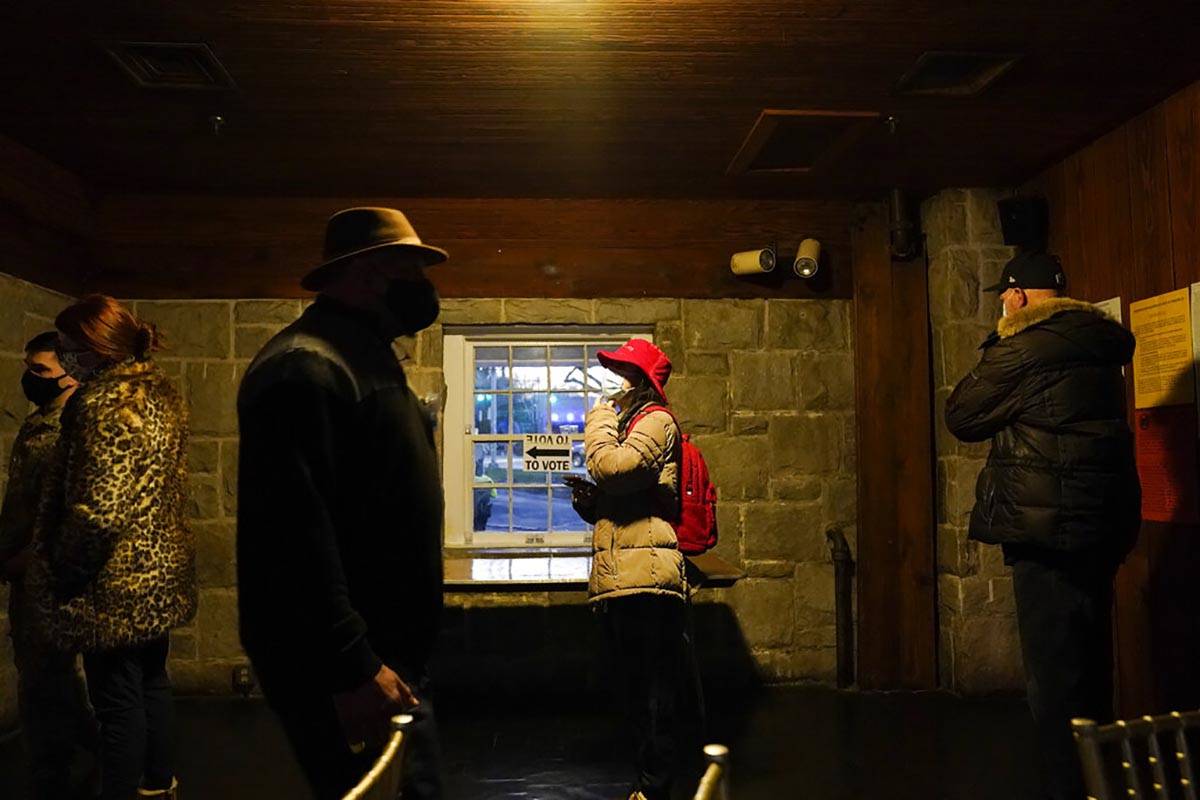 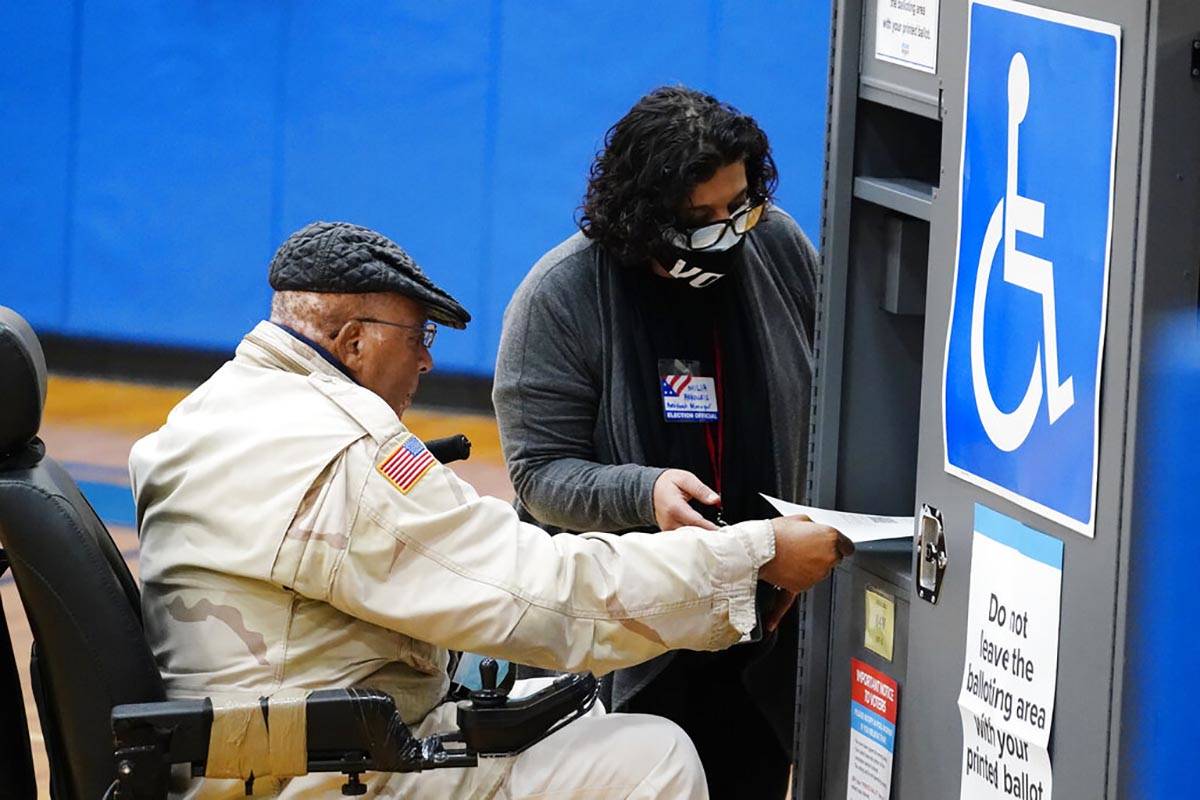 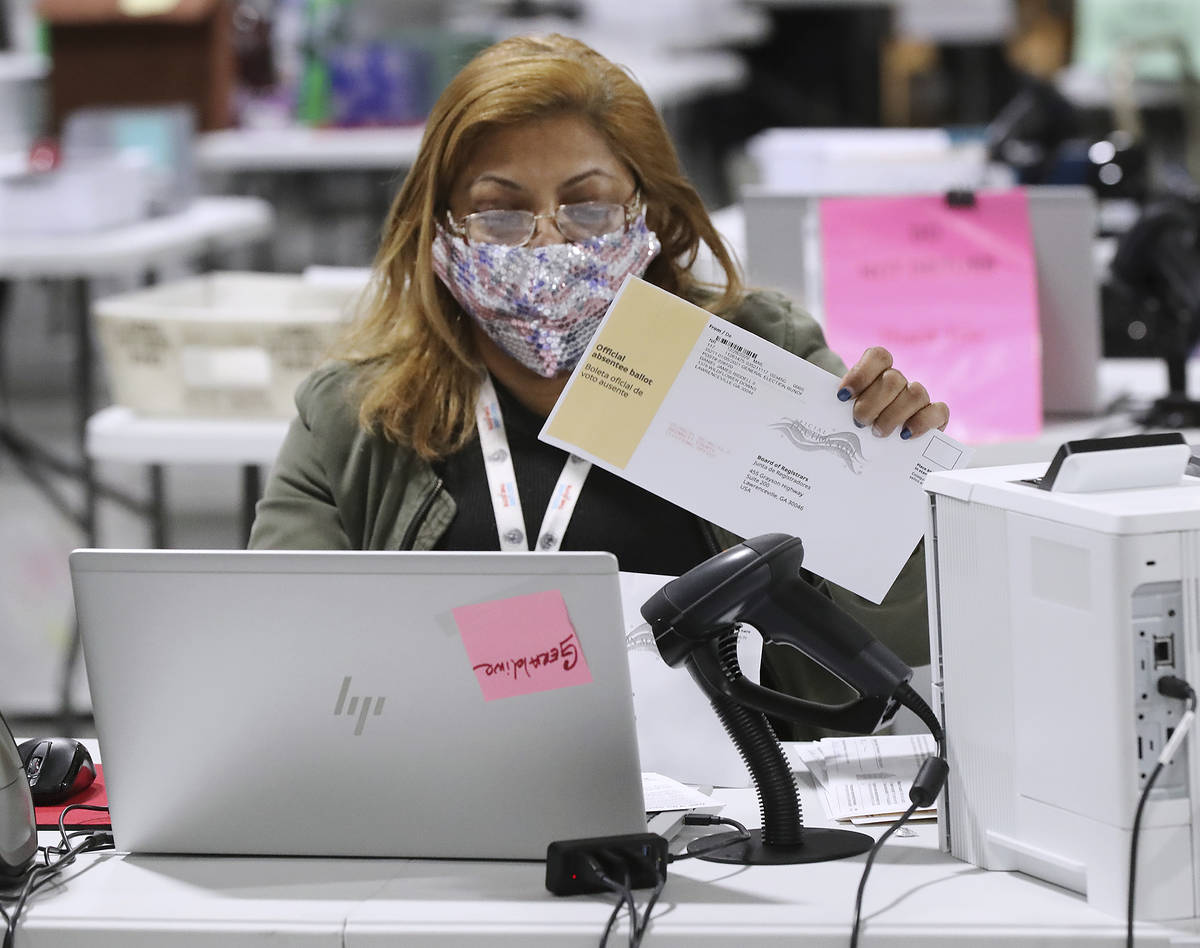 ATLANTA — Democrat Raphael Warnock won one of Georgia’s two Senate runoffs Wednesday, becoming the first Black senator in his state’s history and putting the Senate majority within the party’s reach.

A pastor who spent the past 15 years leading the Atlanta church where Martin Luther King Jr. preached, Warnock defeated Republican incumbent Kelly Loeffler. It was a stinging rebuke of outgoing President Donald Trump, who made one of his final trips in office to Georgia to rally his loyal base behind the state’s Republican candidates.

In an emotional address early Wednesday, he vowed to work for all Georgians whether they voted for him or not, citing his personal experience with the American dream. His mother, he said, used to pick “somebody else’s cotton” as a teenager.

“The other day, because this is America, the 82-year-old hands that used to pick somebody else’s cotton picked her youngest son to be a United States senator,” he said. “Tonight, we proved with hope, hard work and the people by our side, anything is possible.”

Ossoff-Perdue race too close to call

The focus now shifts to the second race between Republican David Perdue and Democrat Jon Ossoff. Early Wednesday, Ossoff claimed victory, but the candidates were locked in a tight race and it was too early to call a winner. Under Georgia law, a trailing candidate may request a recount when the margin of an election is less than or equal to 0.5 percentage points. Ossoff led by about 16,000 votes as of 7 a.m. PST.

If Ossoff wins, Democrats will have complete control of Congress, strengthening President-elect Joe Biden’s standing as he prepares to take office on Jan. 20.

This week’s elections mark the formal finale to the turbulent 2020 election season more than two months after the rest of the nation finished voting. The unusually high stakes transformed Georgia, once a solidly Republican state, into one of the nation’s premier battlegrounds for the final days of Trump’s presidency — and likely beyond.

Warnock’s victory is a symbol of a striking shift in Georgia’s politics as the swelling number of diverse, college-educated voters flex their power in the heart of the Deep South. It follows Biden’s victory in November, when he became the first Democratic presidential candidate to carry the state since 1992.

The Associated Press declared Warnock the winner after an analysis of outstanding votes showed there was no way for Loeffler to catch up to his lead. Warnock’s edge is likely to grow as more ballots are counted, many of which were in Democratic-leaning areas.

Loeffler refused to concede in a brief message to supporters shortly after midnight.

“We’ve got some work to do here. This is a game of inches. We’re going to win this election,” insisted Loeffler, a 50-year-old former businesswoman who was appointed to the Senate less than a year ago by the state’s governor.

Loeffler, who remains a Georgia senator until the results of Tuesday’s election are finalized, said she would return to Washington on Wednesday morning to join a small group of senators planning to challenge Congress’ vote to certify Biden’s victory.

Georgia’s other runoff election pitted Perdue, a 71-year-old former business executive who held his Senate seat until his term expired on Sunday, against Ossoff, a former congressional aide and journalist. At just 33 years old, Ossoff would be the Senate’s youngest member.

Trump’s false claims of voter fraud cast a dark shadow over the runoff elections, which were held only because no candidate hit the 50% threshold in the general election. He attacked the state’s election chief on the eve of the election and raised the prospect that some votes might not be counted even as votes were being cast Tuesday afternoon.

Republican state officials on the ground reported no significant problems.

Both contests tested whether the political coalition that fueled Biden’s November victory was an anti-Trump anomaly or part of a new electoral landscape. To win in Tuesday’s elections — and in the future — Democrats needed strong African American support.

Drawing on his popularity with Black voters, among other groups, Biden won Georgia’s 16 electoral votes by about 12,000 votes out of 5 million cast in November.

Trump’s claims about voter fraud in the 2020 election, while meritless, resonated with Republican voters in Georgia. About 7 in 10 agreed with his false assertion that Biden was not the legitimately elected president, according to AP VoteCast, a survey of more than 3,600 voters in the runoff elections.

Election officials across the country, including the Republican governors in Arizona and Georgia, as well as Trump’s former attorney general, William Barr, have confirmed that there was no widespread fraud in the November election. Nearly all the legal challenges from Trump and his allies have been dismissed by judges, including two tossed by the Supreme Court, where three Trump-nominated justices preside.

Even with Trump’s claims, voters in both parties were drawn to the polls because of the high stakes. AP VoteCast found that 6 in 10 Georgia voters say Senate party control was the most important factor in their vote.

Even before Tuesday, Georgia had shattered its turnout record for a runoff with more than 3 million votes by mail or during in-person advance voting in December. Including Tuesday’s vote, more people ultimately cast ballots in the runoffs than voted in Georgia’s 2016 presidential election.

Many in Georgia’s large African American community were ecstatic when they awoke to news of Harnock’s win on Wednesday.

Tracey Bailey, a 58-year-old assistant community manager at an apartment complex in downtown Atlanta, said she jumped for joy.