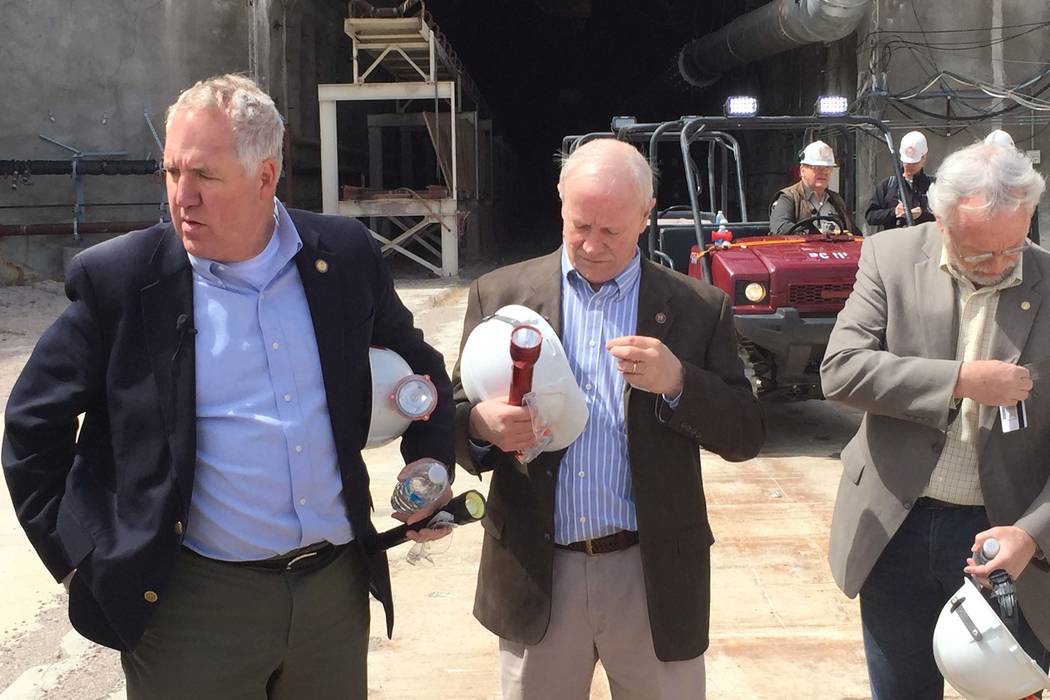 WASHINGTON — A key congressional proponent of the proposed Yucca Mountain nuclear waste repository in Nevada announced Friday that he would not seek reelection, becoming the latest Republican in the House to bow out before next year’s partisan battles.

In a statement released by his office, Rep. John Shimkus, R-Ill., called his service in Congress a “blessing” but a sacrifice by his wife and their sons.

“As Illinois candidates begin to circulate petitions next week, now is the time to announce that I will not be seeking reelection,” Shimkus said in the statement.

Shimkus is the ranking Republican on the House Energy and Commerce subcommittee on environment and climate change. This year he pushed legislation to authorize funding to restart the licensing process to open Yucca Mountain after decades of stalemate.

As chairman of that subcommittee in the last Congress, Shimkus was an ardent proponent of the Trump administration’s proposal to bring nuclear waste from power plants across the country to the Nevada site that was designated in 1987 by Congress as the permanent repository for such waste.

“While I certainly have had many battles over the years with Rep. Shimkus, I wish him the best in his retirement,” Titus told the Las Vegas Review-Journal.

Shimkus accused former Senate Majority Leader Harry Reid, D-Nev., and former President Barack Obama of playing politics to shelve the Department of Energy’s application for a repository license before the Nuclear Regulatory Commission, which has blocked development of the waste repository.

His staff continues to advocate for reversing the Obama administration’s decision to mothball the project and restarting licensing on the sole permanent nuclear waste repository designated by Congress.

“We’ll be here for the rest of his term. We are not giving up on that,” a Shimkus spokesman said.

“My family and I thank you for allowing us the honor to serve,” he said in the statement. “Our dedication to our country, our state, our church and our community will not waiver as we embark on the next chapter of life.”

Shimkus becomes the 12th Republican member of the House to retire or announce that they will not seek reelection in 2020. The 15th Congressional District of Illinois is considered a safe Republican seat.

There are three Democrats who have announced they will not seek re-election in the House.

Shimkus has become a well-known name in Nevada for his tenacity on the issue of restarting licensing proceedings for Yucca Mountain, despite bipartisan opposition to storing nuclear waste just 90 miles north of Las Vegas.

The Illinois congressman told a House committee this year that failure to open Yucca Mountain was costing U.S. taxpayers $2 million a day and leaving nuclear waste stored at 121 sites in 39 states across the country.

Though there are nuclear power plants in Illinois, none are in Shimkus’ congressional district.

A recent House bill to appropriate funding to continue licensing on Yucca Mountain failed in the House Appropriations Committee. Rep. Mark Amodei, a Republican and the only Nevada lawmaker on the panel, voted against a bipartisan amendment brought by Shimkus.

Titus and two other Nevada Democrats, Reps. Steven Horsford and Susie Lee, lobbied their party leaders and lawmakers on the committee to help defeat the spending bill by a narrow margin.

Sen. Lamar Alexander, R-Tenn., chairman of the Senate Appropriations subcommittee on energy, said this year that he would like the Senate to vote up or down on funding for a license to operate Yucca Mountain before he writes a spending bill.

Though officials in Nye County, where Yucca Mountain is located, and other rural counties support the project, Gov. Steve Sisolak, the Nevada congressional delegation and the Nevada Legislature oppose the repository.

Tribal leaders, business leaders and conservation groups also have raised opposition to transporting and storing radioactive waste in an active seismic zone, near groundwater and close to a world tourist destination.