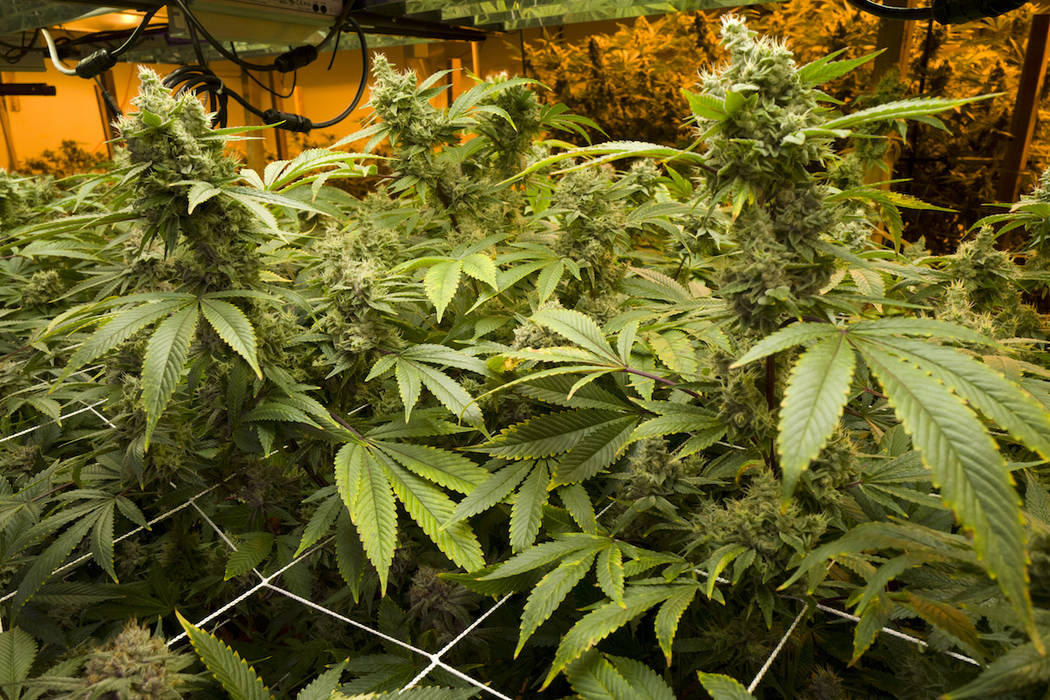 An analysis of Nevada data conducted by a Washington-based scientist shows that results from marijuana testing labs in the state may vary wildly. (Richard Vogel/AP)

RENO — When it comes to marijuana testing labs in Nevada, results may vary — wildly — according to an analysis of state data conducted by a Washington-based scientist.

In one case, a marijuana testing lab did not fail a single product that it screened in 14 of the 17 months analyzed by Jim MacRae, a scientist and marijuana consumer advocate based in Washington who has conducted similar studies of Washington’s testing labs in recent years.

“In my opinion, that’s not possible. You should see a 10-15 percent failure rate across the board,” said Nakhil Kumar, senior microbiologist with Canalysis Labs in Las Vegas.

MacRae analyzed 17 months’ worth of public testing records that spanned January 2018 to May 2019, looking at failure rates because of the presence of yeast, mold, aspergillus, pesticides or heavy metals, as well as potency. The study found that some labs appear to give more favorable results for cannabis growers than others.

In addition to the lab that had a 0 percent failure rate for 14 months, three other labs routinely failed less than 10 percent of the products they tested. And those labs with the lowest failure rates also reported the highest THC results for cannabis products.

Knowing who exactly those labs are is anyone’s guess at this point, though it appears that state regulators are aware of their identities.

MacRae, who detailed some of his findings in a blog post on his website Thursday, requested the testing data from Nevada last fall, but the state was hesitant to give it to him. After some back and forth, this summer the state provided MacRae with 17 months’ worth of testing data — some 80,000 data points — from the nine highest-volume labs in the state, but on the condition that the data would be blind, meaning that the labs would not be identified but would have unique identifying numbers so MacRae could sort through it.

MacRae presented his findings to the state on Sept. 12, and had a followup meeting with state officials the following day, which the state confirmed in a statement.

“The information contained in his findings seemed to confirm that some marijuana testing facilities in Nevada were intentionally manipulating testing results,” Nevada Department of Taxation spokeswoman Eden Collings said in the statement.

The state is also looking at potential measures that could help keep a better eye on the labs. That includes hiring a third-party vendor to develop and conduct interlaboratory testing, adding an additional layer of oversight to the testing processes in the state.

The higher the THC listed on marijuana products, the higher their price. So for growers and dispensaries alike, getting products that yield north of 20 percent THC means higher profits. And that was reflected in MacRae’s number crunching.

The data provided to MacRae also allowed him to track grower data, which showed similar increases in THC levels. But for the growers, those increases didn’t happen gradually. Instead, those increases often happened in two to three percentage-point jumps, say from 18 to 21 percent. And those jumps coincided with those growers switching to a new lab, MacRae said.

“There’s strong evidence of lab shopping in Nevada. No question in my mind,” MacRae said.

In Nevada, labs are tasked with being the watchdog of the industry, screening for toxins and ensuring that consumers are getting exactly what they pay for.

But they are also a private, for-profit industry that relies on growers doing business with them in order to remain open.

And that puts them in a precarious situation. Ethical labs can continue to fail growers for microbials and mycotoxins, and report accurate THC levels even if they are lower than the market demand. But they risk losing business to a lab that might be willing to bump those levels up a bit or overlook certain tests.

“It’s basically consumer fraud, and it’s common in the state,” MacRae said. “Right now, from looking at some of these impeccable pass rates, I can’t help but think that these labs are not failing things that should not pass.”

Just days after MacRae met with Nevada officials about the data, the state announced that it was investigating marijuana testing labs for possible THC manipulation and issues revolving around how tainted products made it to store shelves.

So far that investigation has netted one suspension, with the state temporarily shutting down Certified Ag in Sparks last month, accusing the lab of producing inaccurate and misleading THC results. The lab has denied those allegations, calling them “baseless,” and “appalling.”

The state also issued two health notices in August and September after it found multiple batches of smokable flower that had made it to dispensary shelves that later tested for unsafe levels of mold and yeast. In one batch, inspectors found high levels of aspergillus, a fungus that can be very dangerous and even deadly to those with weakened immune systems, such as patients undergoing chemotherapy for cancer who use cannabis to improve their appetite.

Riana Durrett, executive director of the Nevada Dispensary Association, said that it’s “critical that the testing requirements are properly enforced.”

“There should be no tolerance for inaccurate test results,” Durrett added.

The state has taken multiple samples from most of the licensed labs in the state to run retests to see if the results were accurate as part of that investigation.

MacRae said he intends to submit a new request to the state asking for up-to-date data, but more importantly, for the data to be unblinded so he can see exactly which labs are undertaking questionable practices.