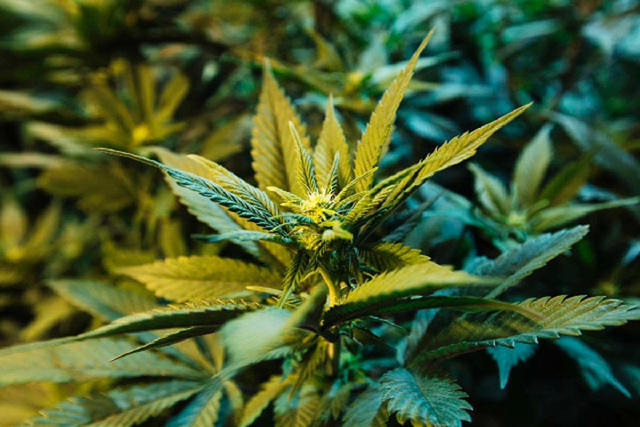 The Gaming Control Board told owners of a Las Vegas restaurant Thursday to find a new slot machine route operator for the business’s games — one whose owner doesn’t have ties to medical marijuana.

The decision marks the first time gaming regulators have ruled on a licensing matter concerning a gaming business in light of the state’s fledgling medical pot industry.

In May, the Control Board in an industry notice admonished gaming license-holders and prospective license applicants to stay away from the medical marijuana business in light of continued federal enforcement of anti-drug laws.

At a hearing in Las Vegas Thursday, owners of the Crab Corner on South Rainbow Boulevard were seeking a restricted gaming license to operate five slot machines. They had contracted with route operator Nevada Gaming Partners to manage the games, but the three-member Control Board unanimously voted to require the Crab Corner owners to hire a different slot route operator.

The Control Board rejected Nevada Gaming Partners because Sarah Familian, the wife of owner Bruce Familian, is one of several individuals who own an 8 percent share of GB Sciences Nevada LLC. The company in June was awarded one of 18 medical marijuana dispensary licenses by the Clark County Commission.

Control Board Chairman A.G. Burnett said splitting the two business interests between husband and wife was not enough separation to satisfy the industry notice, which the regulatory agency published in May.

“That is not enough of a disconnect for me,” Burnett said. “I’m happy to go forward with this location. I just want another slot operator.”

Control Board member Terry Johnson, who wrote the memorandum, said splitting the businesses might meet legal requirements, but it falls short of the agency’s ruling. The Control Board based its decision on the federal government’s view that distribution, possession and sale of marijuana is a crime.

“It’s not within the spirit of the of the notice,” Johnson said.

Burnett said after the meeting the Control Board’s ruling on Nevada Gaming Partners was intended to “send a message” to the state’s casino industry.

In May, Johnson wrote that “unless the federal law is changed, the board does not believe investment or other involvement in a medical marijuana facility or establishment by a person who has received a gaming approval or applied for a gaming approval is consistent with the effective regulation of gaming.”

Last month, the Nevada Gaming Commission voted to uphold the Control Board’s mandate, although three of the five gaming commissioners — all attorneys — recused themselves because their firms had clients applying for medical marijuana licenses.

Several of the 18 dispensary licenses awarded by Clark County have owners with ties to the casino industry.

In addition to Sarah Familian, GB Sciences lists Jane Tobman Moore as an 8 percent owner. Tobman Moore is married to Barry Moore, who has restricted gaming licenses for several taverns, including Shuck’s Gaming and Oyster Bar and Beano’s Casino.

The Control Board’s action took Bruce Familian by surprise. He watched the proceedings but declined comment. It’s unclear what the ruling means for Nevada Gaming Partners’ other route operations.

Las Vegas gaming attorney Jennifer Roberts, who represents Nevada Gaming Partners, said GB Sciences does not yet have a license for a dispensary and has not conducted any medical marijuana sales.

“I hope this wouldn’t affect this gaming license,” Roberts told the Control Board. “No business has been conducted and nothing illegal has taken place.”

John Smolen, a Crab Corner owner, told the Control Board the restaurant would find another slot machine route operator.

The Nevada Gaming Commission will have a final say on the Control Board’s recommendation on July 24.