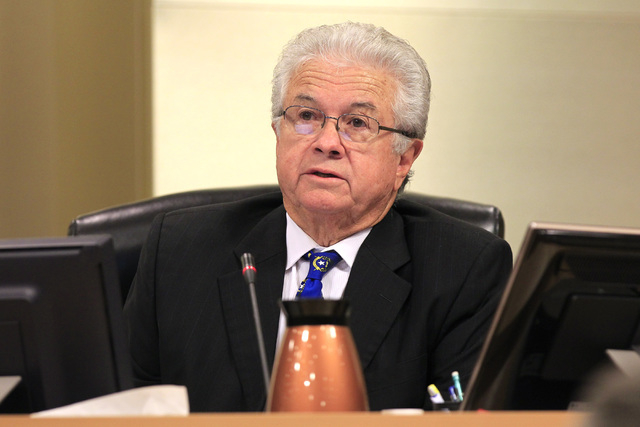 The future dispensaries of Clark County’s burgeoning medical marijuana industry might not be as initially widespread as expected.

The county’s and state’s top picks didn’t match up, and as a result, the unincorporated areas of the county could start out in early 2015 with 10 dispensaries that sell medical marijuana products instead of 18.

The end game for Clark County’s dispensaries still has an uncertain outcome, but this much is certain: both the state and the county have a fundamental disagreement about how the process should have played out. And industry observers privately say lawsuits with high-powered litigators at the helm are highly likely because of the high stakes.

From investments that easily reach six figures comes a chance for entry into an exclusive but lucrative multimillion-dollar industry that could grow if the state ever legalizes recreational use of marijuana, following the leads of Colorado and Washington state.

The county approved special use permits for just 18 dispensaries and not any more beyond that limit during marathon hearings in June that examined 79 applications.

County commissioners will take up dispensary applications again at their zoning meeting Wednesday. A number of scenarios are possible, though the 10 with approval from both the state and the county are safe.

Commissioners could give permits to some or all of the eight dispensaries that the state gave the highest scores to, or decide to stick with only their original choices, which would leave residents with 10 dispensaries.

Correspondence between county and state officials show that the state’s description of how the process would unfold changed.

County Manager Don Burnette contacted Chad Westom, bureau chief of the Nevada Division of Public and Behavioral Health, on Nov. 13 after the state’s rankings showed that only 10 of 18 possible dispensaries would be allowed in unincorporated Clark County.

The county’s letter to Westom pointed to minutes of a July 9 meeting of the state Subcommittee on the Medical Use of Marijuana.

According to the minutes, Westom said the state would come up with the highest 18 rankings in Clark County and issue provisional certificates. The county “then had the option of denying the businesses at a local level. If they are denied at the local level, then the State would also deny them and the State would let Clark County know who was the next ranked entity,” according to the minutes of Westom’s comments.

“Can we still rely on this testimony?” Burnette asked in his letter.

By Nov. 18, the state responded, saying that Westom’s comments about moving down to the next ranked applicant had not taken into account the need for the state to issue all provisional certificates within 90 days of receiving an application.

At this time, the state does not have the authority to move down to the next ranked applicant or issue any more provisional certificates, Richard Whitley, a state administrator, wrote to the county. That 90-day period ended Nov. 3.

“I think they’ve got too narrow of an interpretation of the statute,” Sisolak said, adding he’s waiting to hear more information on potential options from the county’s legal counsel.

The development has taken those following the medical marijuana industry’s start by surprise.

“It’s kind of a shocker,” said state Sen. Tick Segerblom, D-Las Vegas, who wrote the legislation creating the dispensary program. “I feel bad for everybody.”

Segerblom said the upsetting part is that the county was given an ultimatum about which applicants could open their medical marijuana businesses.

“My concern frankly is that somebody’s going to go to court,” Segerblom said in an interview last week. “It’s almost inevitable.”

“It’s just a mess for both sides,” he said, adding that applicants have invested much time and money in their efforts.

Las Vegas approved 27 medical marijuana dispensaries in October, more than double the number of pot shops set aside for the city by Nevada regulators.

Councilman Bob Coffin said the city made a conscious choice to approve extra dispensaries in an effort to avoid putting itself on a crash course with the state.

“We’re trying to avoid the confrontational approach the county took,” Coffin said Monday. “Ultimately, the state has the hammer; they get the final say under the law. We took a big step in approving more (dispensaries) than the state asked for. … So we, in essence, can open 10 of 12 dispensaries whenever (dispensary owners) want.”

Ten of Las Vegas’ 12 state-ranked dispensary applicants were awarded land use and licensing credentials over the course of a two-day pot permit hearing marathon last month.

Representatives with one of those pot shop hopefuls pulled their application prior to a City Council vote.

The other applicant, NuLeaf CLV, has not ruled out litigation over the 4-2 vote that killed its bid for a dispensary near South Decatur and West Charleston boulevards.

Councilwoman Lois Tarkanian — who joined Coffin in support of a failed bid to delay city pot shop hearings until after state regulators released their opinion on dispensary applicants — suspects city leaders are better positioned to make the final call on pot shop applicants.

“On our level, 10 out of 12 state (reports) matched our recommendation,” she said. “Where you see a difference I think is just where the state isn’t aware of what we’re doing.

“They’re not aware of what’s happening in all the different areas, and that’s why (the permit process) should be local.”

So far, Henderson has avoided much conflict with the state, largely because the city decided to let the state approve or deny applicants before the City Council holds any hearings.

If an applicant met the minimum qualifications — which include having no felony record, being a U.S. resident and having business ties to Nevada — the city forwarded the name to the state.

“It truly takes out a lot of the politics,” said Bristol Ellington, an assistant city manager.

Early this month, the state Division of Public and Behavioral Health said it had approved provisional licenses for five dispensaries in Henderson — the maximum allowed under state law — and rejected 22 other applicants.

The Henderson City Council will hold a special meeting to review the applications Feb. 10. That meeting will be open to the public.

The state has ranked its top four dispensary applicants for North Las Vegas from a pool of 21 contenders, but city officials haven’t yet made a final decision.

Arizona’s medical marijuana dispensary system, which started after a voter initiative in 2010 passed, used a lottery to pick qualified applicants.

That didn’t prevent a lawsuit.

Applicants first needed to get a provisional letter from the local city or county saying that the proposed location meets local zoning requirements.

From there, the state used a lottery ping-pong machine to pick applicants at random, said Will Humble, director of the Arizona Department of Health Services.

The state, divided into 126 community health zones, allowed one dispensary in each. The winners then had a one-year deadline to get a certificate of occupancy from the local jurisdiction.

Some jurisdictions gave applicants more scrutiny than others, and Arizona got sued by a dispensary applicant who argued that the one-year deadline wasn’t long enough, Humble said.

Arizona dropped that regulation after a judge sided with the applicant.