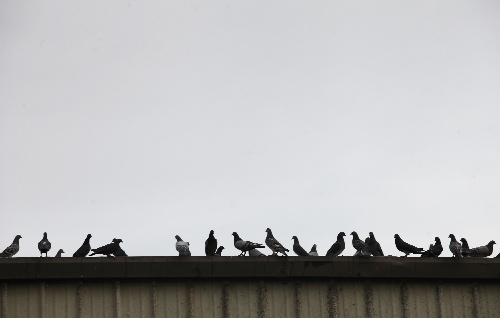 County commissioners Tuesday struck down a proposal that would outlaw intentionally feeding pigeons, fearing fees and potential jail time for scofflaws would be too harsh.

As the proposal was written, those who refused to stop feeding pigeons on public or private property after being warned once by a postcard through a complaint-based system could have faced a misdemeanor charge worth up to six months in jail or a $1,000 criminal fine.

With the inclusion of the nuisance language, civil penalties of up to $10,000 could be assessed for violators in unincorporated areas of the county, although county staff said that has never happened. Staff added that those penalties are in line with other county nuisance ordinances, including the barking dog ordinance.

Commissioner Chris Giunchigliani, who sponsored the proposal, said she wanted to “simply make it a nuisance for intentionally throwing food out” in a manner that results in the “lingering, roosting and/or congregating of 10 or more pigeons on public or private property, after being given written notice,” according to the amendment.

It wasn’t to pit neighbors against each other, or stop people with bird feeders, Giunchigliani said. The proposal was intended to address the cost to taxpayers for pigeon poop cleanup.

According to county management, anywhere from $10,000 to $15,000 is spent clearing the birds out from parks and community centers with hazmat cleanup and installing devices that keep pigeons from making the mess again.

Giunchigliani passed around photos from some of her constituents, showing damage to homes from pigeon droppings that weakened their structures. But that could not sway her colleagues to vote for the proposal, in large part because of the language that someone could go to jail for feeding pigeons.

Commissioner Lawrence Weekly sided with his colleague’s proposal by voting to pass the proposal, but he was the only one. The other five commissioners voted against the amended ordinance.

Sally Larimore, who lives in rural Clark County, took issue with the proposal, saying that it violates the rights of private property owners who like to feed birds.

The request for change fell in line with other areas of the valley including Henderson, which recently declared pigeons a public nuisance and has had two complaints filed since September. In Las Vegas, pigeons also are considered a nuisance in that city’s animal control ordinance.