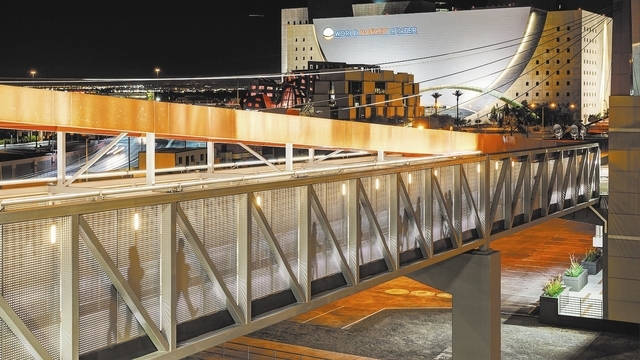 The Symphony Park Pedestrian Bridge creates an easy way for residents and visitors to walk to and from downtown and Symphony Park. On Wednesday the Las Vegas City Council unanimously approved a development agreement with CITRA Real Estate Capital to create a $71 million skilled nursing and assisted living center in the Symphony Park area. (Review-Journal File Photo)

A $71 million skilled nursing and assisted living center will bring hundreds of jobs to a previously barren patch of downtown Las Vegas, but it’s taking a hefty public subsidy to make it happen.

On Wednesday the City Council unanimously approved a development agreement with CITRA Real Estate Capital to create the center at 394 S. City Parkway.

The site is a former rail yard that is being transformed through private and public investment into the mixed-use Symphony Park area.

Under terms of the deal, CITRA will pay a net sales price of about $3.5 million for 3.3 acres appraisers say could be worth as much as $11.5 million.

CITRA will use the property to build a skilled nursing center, an assisted living facility and parking garage. The development will have ground floor retail and restaurants, according to the developer.

Economic and Urban Development director Bill Arent said the project will create 892 direct jobs with $37.6 million in annual payroll. The project will put the land on the property tax rolls, which will mean approximately $780,900 in new property taxes every year.

In the deal negotiated in 2012, the land was valued at about $5 million and has continued to increase in value, giving CITRA a larger discount, Arent said.

The $3.5 million net sales price includes consideration for infrastructure improvements by the developer and compensation for a city-built pedestrian bridge that made some of the property unusable, he said.

All told, he said, the value of the project to the city outweighs the cost of selling property at a discount. A summary of the project values the subsidies at $2.8 million to $6.5 million.

“We are going to make it up and then some through new property taxes through the life of the project,” Arent said.

The deal calls for construction to start by spring 2015 and to be complete by November 2016, according to Arent.