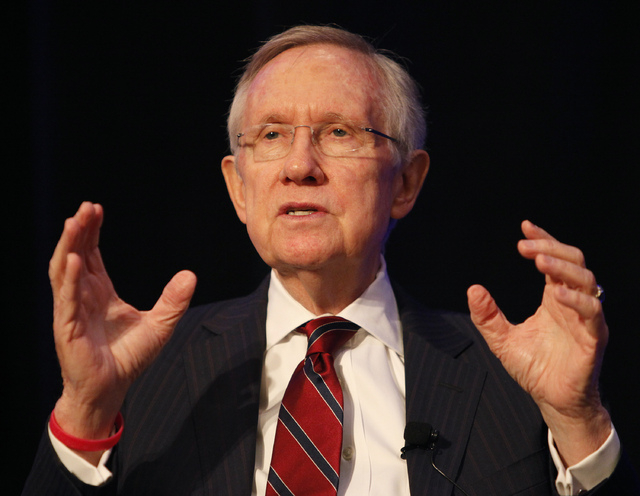 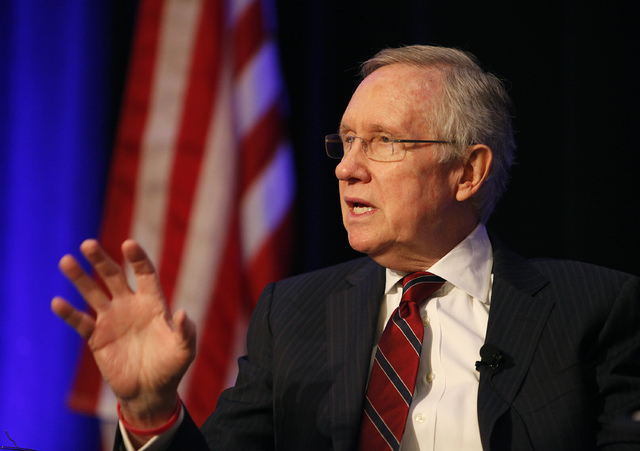 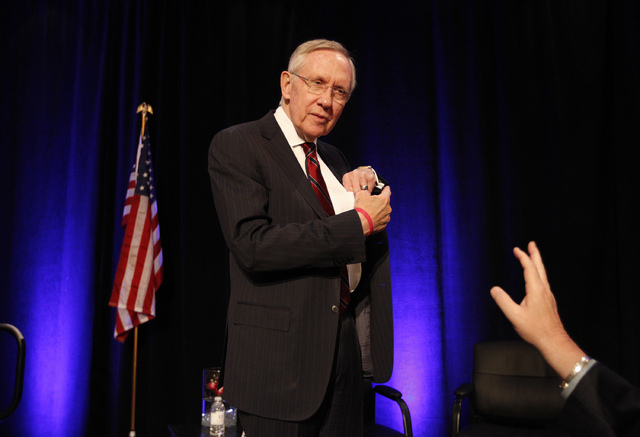 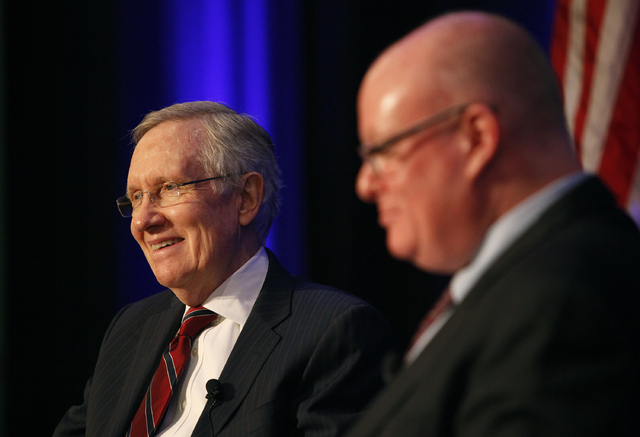 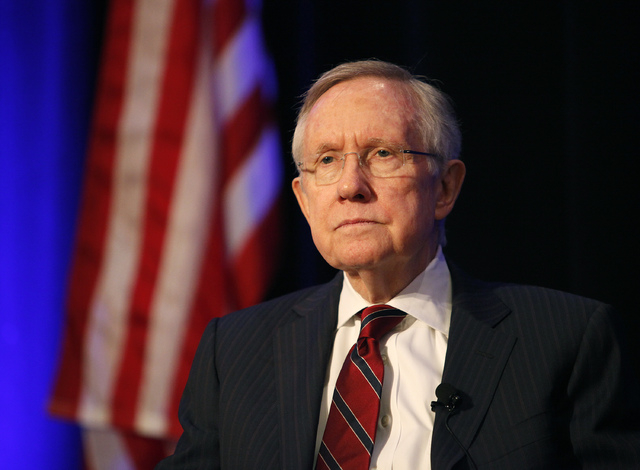 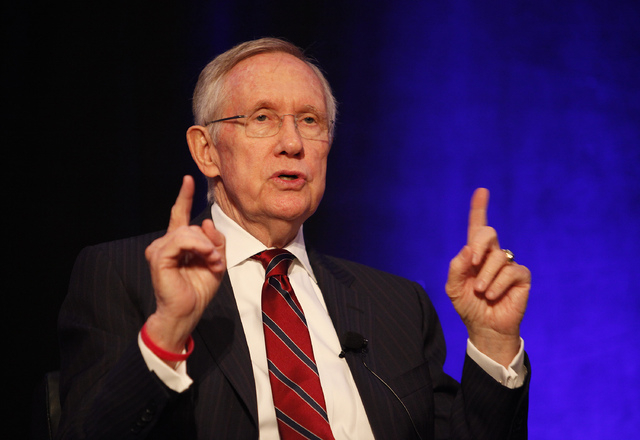 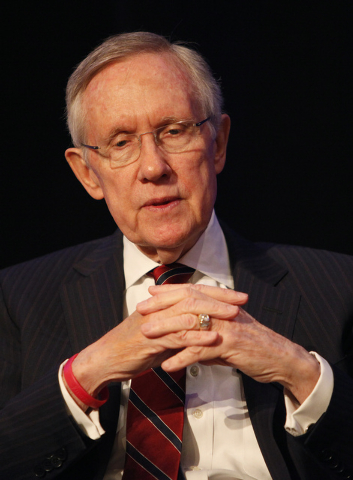 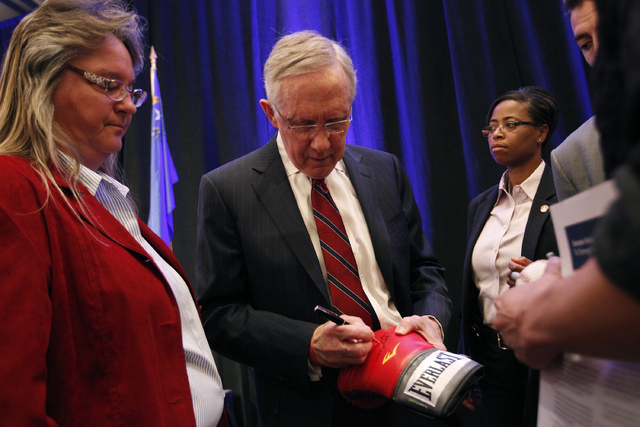 U.S. Sen. Harry Reid on Thursday called supporters of Bunkerville rancher Cliven Bundy “domestic terrorists” because they defended him against a Bureau of Land Management cattle roundup with guns and put their children in harm’s way.

“Those people who hold themselves out to be patriots are not. They’re nothing more than domestic terrorists,” Reid said during an appearance at a Las Vegas Review-Journal Hashtags &Headlines event at the Paris Las Vegas.

He said, “I repeat: What went on up there was domestic terrorism.”

The BLM shut down its weeklong roundup of Bundy’s cattle Saturday after an armed confrontation with dozens of militia members who had traveled to Southern Nevada from across the country and from neighboring states.

Bundy has not paid federal grazing fees for 20 years and owes about $1 million to the government.

Reid, the Senate majority leader, who is in Las Vegas during Congress’ Easter recess, is known for not pulling punches. The senator said he talked last week with federal, state and local officials about Bundy as well as the Nevada Cattlemen’s Association, which has not backed Bundy’s personal battle but has expressed concerns about access to public land.

The senator said he spoke with Attorney General Eric Holder, FBI leaders and Clark County Sheriff Doug Gillespie. Reid said he understands there is a task force being set up to deal with Bundy, and Gillespie is involved as well.

“It is an issue that we cannot let go, just walk away from,” Reid said.

Reid accused Bundy backers of bringing their children to protest the BLM so that federal authorities might harm them, which would prompt negative headlines around the world and hurt the government’s case against the rancher.

“There were hundreds — hundreds of people from around the country — that came there,” Reid said. “They had sniper rifles on the freeway. They had assault weapons. They had automatic weapons.”

According to Reid, some protesters said they had “children and women lined up because if anyone got hurt we wanted to make sure they got hurt first, because we want the federal government hurting women and children. … What if others tried the same thing?”

No shots were fired during the confrontation.

Reid didn’t have kind words for Bundy either, calling him a lawbreaker.

Bundy and his family did not respond to requests for comment on Reid’s remarks.

Reid noted there are two court orders allowing the BLM to conduct the roundup of Bundy’s 500 to 900 “trespass cattle,” which have long roamed on federal public land that the Bundy family homesteaded in the 1870s. Some of the land includes habitat for the threatened desert tortoise, which the federal government is trying to protect by limiting grazing.

During the question-and-answer forum, Reid was asked by R-J columnist Steve Sebelius, the moderator, what might happen in the Bundy case and what should be done about supporters “who are willing to shed blood for the cause.”

“I hope that’s not the case,” Reid said, turning somber. “I repeat, we are a country of laws. … We can’t let this happen.”

If Bundy wins his battle with the BLM, it could set a precedent in which protesters and militias might come to the aid of other farmers and ranchers who have land disputes with the federal government, much like the Sagebrush Rebellion in the 1970s and 1980s. The federal government owns about 85 percent of Nevada land, and politicians, particularly states’ rights conservatives, have argued the state should try to take back or buy back the property.

Nevada’s 1864 constitution, however, cedes rights to the vast stretches of public land to the federal government.

“The people inhabiting said territory do agree and declare, that they forever disclaim all right and title to the unappropriated public lands lying within said territory, and that the same shall be and remain at the sole and entire disposition of the United States,” the state constitution says in the ordinance section.

Reid noted many of the protesters care deeply about both the state constitution and the U.S. constitution.

Reid also addressed several other issues during the hourlong Q&A:

■ On President Barack Obama’s health care insurance law, Reid said it’s a success with 8 million people signed up now, 6 million young adults on their parents’ plans and 6 million new Medicaid recipients. He said that the president has delayed implementation of some parts of the law and “there’s still a lot of things left to do,” but it’s working.

Asked whether there might be a single-payer system one day, Reid said, “Not in our lifetime.”

■ On the possibility that GOP Gov. Brian Sandoval might run against Reid in 2016, the senator said he praised the governor for implementing Obamacare despite troubles caused by Xerox with the Silver State Health Insurance Exchange.

“I admire Sandoval,” Reid said, explaining they work together on Nevada interests, including economic development.

Sandoval, who is expected to win re-election this year, defeated Reid’s son, Rory, in his first 2010 campaign. The governor has said he has no interest in leaving his gubernatorial job early, but the 2016 speculation about him continues.

“If Brian Sandoval wants to run against me a few years from now, he has a right to do it,” Reid said. “I’m not a virgin. I’ve had a few races in my day. … I’m not going to pick on him just to pick on him.”

Asked whether Reid would rather work with a Democratic governor, he said, “Sure, I’d rather have a Democrat. But in the meantime, I’m going to continue to work with him the best I can.”

■ On the 2016 presidential race, Reid refused to say who his favorite White House hopeful is but mentioned Vice President Joe Biden and Hillary Clinton, the former secretary of state, U.S. senator and first lady.

“They have agreed to nothing,” Reid said. “This has been very hurtful.”

■ On increasing the minimum wage to $10.10 an hour, Reid discounted critics who say it could cost jobs because businesses will be afraid to hire. He said during the Great Depression, the United States learned that higher wages help boost the economy.

“When people have money, they spend money,” Reid said.