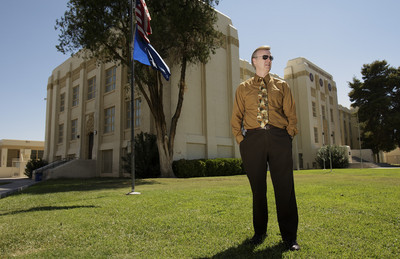 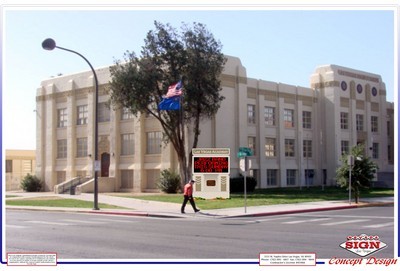 Are there some spots, even in this city, that don’t need electronic glitz? The Historic Preservation Commission thinks there are, and one of those is Las Vegas Academy.

Located in a downtown historic district, the magnet school which allows students to major in performing arts is having trouble convincing the commission that an electronic sign advertising the school’s productions and events is necessary.

“Harmony in a physical environment relaxes you; it decreases stress,” said Janet R. White, a preservation board member who teaches architecture at University of Nevada, Las Vegas.

“That neighborhood is a calm oasis in this city, and I feel strongly that it is one of the few places where everyone can feel quiet, subdued, and restful. We have to protect that.”

City planning staff reviewed a preliminary design for a 12-foot-high electronic marquee proposed by the school on Aug. 13 and recommended its denial to the preservation commission. The commission tabled the issue at a subsequent meeting, encouraging school staff and Nevada Sign to alter the design to better suit the character of the neighborhood.

“The electronic nature of the sign is really a problem for some board members,” White said.

The initial request was recommended for denial because the sign was deemed not compatible with the historic architecture of the school.

Planners said its size would have a negative impact on the school’s facade and the contemporary technology was not appropriate within the context of the Las Vegas High School Neighborhood Historic District.

School principal Stephen Clark said whether commissioners like the sign is irrelevant. “The code says ‘compatibility’ and the sign we proposed we feel is quite compatible,” he said.

The code to which Clark refers is the Las Vegas Municipal Code, which states that applications for alteration of historic sites can be denied if the proposed work is not compatible with the distinctive character of the overall property.

Compatibility is defined as “a pleasing visual relationship between elements of a property, building or structure.”

Nevada Sign, the company commissioned by the school for the project, redesigned the template after planners said it needed to blend with the neighborhood more. Features were added to simulate the building’s front entrance. A plaque was also added informing onlookers of the building’s historic significance.

The school plans to take the issue to the Las Vegas City Council if the commission rejects the proposal at its next meeting. Despite commission requests to do so, Clark doesn’t plan to alter the design again or change the sign’s intended location.

The school wants to put the sign where White said is the best view of the Las Vegas High School Historic District’s Spanish Art Deco facade.

“I’m really proud I take my daughter to that campus every day,” said Las Vegas resident Erin Doyle, who supports the sign. “The character of the place is a very idiosyncratic-type environment.”

But White and other members of the commission want the sign moved around the corner, by the school’s theater. If it was there, the sign wouldn’t “pollute” the historic focal point and would be visible to parents dropping their kids off at school, White said.

“It’s a question of whether or not you value a sense of heritage,” White said. “If everything was brand new all the time, we wouldn’t value the past.”

Clark counters that the reason the school is a historic site “is because it is still functioning as a school.”

When people drive down Seventh Street now, they don’t know the building is Las Vegas Academy, he said.

He insists the sign must be at the front of the building to send a message that the marquee belongs to all students. If it was around the corner, students might think the sign is just for the thespians.

The school wants to put the marquee at the same spot where an old sign stood. That dilapidated sign was taken down three years ago for safety reasons after it was hit by a motorist.

Las Vegas Academy hosts some 130 events a year. An electronic sign would allow the school to easily advertise more than one event at once, said Clark, who said events often occur simultaneously at the school’s three theaters.

“It’s not fair that they don’t have a sign,” said Doyle, the Las Vegan whose daughter is in the school’s small jazz program. “They had a sign and it died, and now they can’t replace it. It’s a fully functioning school, let it function.”