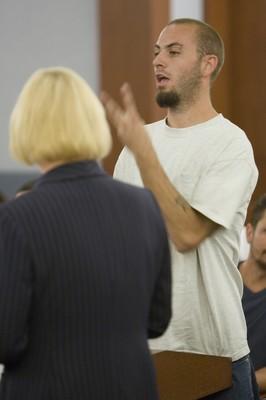 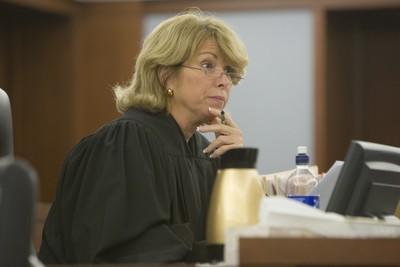 Two years ago, 24-year-old Joshua Hatter was driving his truck east on Bonnie Springs Road near state Route 159 with two 16-year-old girls beside him and a 12-pack inside him.

When Hatter tried to make a turn, he rolled the truck.

A Nevada Division of State Parks officer arrived at the scene of the crash.

“I’m drunk,” Hatter told the officer, according to the police report. “Arrest me.”

Under Nevada law, a third DUI in seven years is a felony and carries a one- to six-year sentence in prison.

But instead of being incarcerated, Hatter is now working, attending weekly group and individual counseling sessions for substance abuse, staying clean and paying for it all himself as part of the Serious Offender Program at Clark County District Court.

Starting in July, a new state law went into effect codifying the Serious Offender Program, which was established as a pilot project in 1998, and turning it into a new DUI Court that meets every Thursday. Chief District Judge Kathy Hardcastle presides over it.

After an Aug. 9 status check before Hardcastle during her second DUI Court session, Hatter said, “The program is good. It has kept me straight longer than I have ever been straight.”

The DUI Court program is available to offenders who have pleaded guilty to their third DUI and who have not injured or killed anyone while driving under the influence.

The program lasts three years and is self-funded, costing offenders on average $11,000 to complete.

Those with financial hardships can pay less under a sliding fee scale.

If offenders successfully complete each stage of the program and graduate, the charge will be reduced to a misdemeanor.

If they fail, they get convicted of the felony third DUI and sentenced to prison.

The program proceeds in phases, requiring its newer recipients to meet weekly with the judge.

Those status checks spread out to quarterly meetings as participants move successfully through the program.

If participants get caught with alcohol in their system or stop going to counseling, they often get bumped back to phase one.

DUI Court attendees are on house arrest for at least the first six months of the program. The court places a breath ignition interlock device on their cars requiring them to breath clean before they can start their vehicles.

STOP DUI, the local nonprofit which advocates against drunken driving, donated steering wheel lock devices to the program. They are placed by house arrest officers on other vehicles participants might own, rendering them inoperable.

If participants relapse, the court installs an in-home alcohol breath testing device, which videos the participant breathing into it and sends the footage and results of the test to a case manager.

“Our first priority is public safety, and so in order to accomplish that we’ve learned to be very sophisticated,” said Steve Grierson, assistant court clerk of the civil and criminal division.

“The Clubs were an incredible advancement to what we’re doing to ensure we have some public safety protections,” Grierson said.

Once the court can ensure the offender isn’t a danger to society, he said, “then we have a chance to do some therapeutic interventions.”

The program has had success, said Sandy Heverly, executive director of STOP DUI.

She said the group supported the program from the beginning after noticing three-time DUI offenders were walking out of prison in three months.

STOP DUI runs a victim impact panel, which first- and second-DUI offenders are required by law to attend to hear from victims of drunken driving and see the carnage driving drunk can cause. The program boasts an 8 percent recidivism rate.

The recidivism rate for those who have been in the Serious Offender Program since its beginning is 12 percent.

“The fact of the matter is we’ve come to the conclusion there is always going to be a certain segment of that drinking population that is going to continue with that inconsiderate and thoughtless behavior,” Heverly said.

“Really what that is telling you is not only do you have heavy drinkers, but you also have people involved in other crimelike behaviors, which generally indicates to us that you have some sort of personality disorder or anti-social problem as well,” Grierson said.

Hatter, who has been in the program for a year and seven months, fell behind in his counseling sessions, and Hardcastle is keeping a close watch on him by having him come to court every week to check in.

Hatter, who works as an electrician, has lost his driver’s license and relies on his mother to taxi him to court each week.

He noted it’s difficult to miss at least an hour of work a week to go to the courthouse for a status check when that hour could help pay for his participation.

“That’s the consequence. That’s life,” his mother, Tammy, told him.

“If you follow the rules it’s fine. He’s doing good,” she said. “I’m glad he’s caught and done and hope this program will change his life.”

Under the Serious Offender Program, Hatter checked in exclusively with the program coordinator.

But now, like other offenders, he meets with Hardcastle.

“We think there is going to be even more compliance now because the judge is talking to the defendant now rather than a case manager,” Grierson said.

Because the third DUI under Nevada law was not a probational offense, the court wanted this alternative sentencing program put into law this legislative session, Grierson said.

It’s now one of four specialty courts, such as drug and mental health court, for offenders, who benefit from alternative treatments other than prison time.

At her second session of DUI Court, Hardcastle appeared to be more of a counselor at the bench than a jurist.

She asked about people’s feelings, wanted to know what’s going on in their personal lives and how they are coping. But she can be tough.

She refused to allow one woman to visit her dying mother out of state, because she had relapsed several months before, testing positive for alcohol.

Most of the qualms from participants appeared to be with the financial burden of the program. The more intense the supervision, the more likely it is the costs will rise above the $11,000 average.

“You’ve got to invest in yourself. This is an investment,” Hardcastle told one offender at the recent session.

Another offender had relapsed.

“I know you said you were just drinking Red Bull, but there is no alcohol in Red Bull,” she told him as she ordered him back the next week for another status check.

Hardcastle praised 52-year-old Jesus Valenzuela for having completed the program.

“You’ve done very well. You’ve done everything you’re supposed to,” she told him through a Spanish interpreter. “Congratulations Mr. Valenzuela.”

He got a round of applause.

Ronald Taylor, who received his third DUI in 2005, said it’s nice to be in a room with other recovering alcoholics.

Taylor, 53, said when he first entered the program, he had trouble adjusting to the rules.

“They caught me dirty twice,” he said of his case manager.

He was required to spend 107 days at the Salvation Army in-patient recovery program, where he said he learned a lot about his disease, particularly in the AA meetings.

The DUI Court program is an intense commitment, but it has changed his life.

“I’ve gained my family back. My kids respect me. I’ve changed my friends,” Taylor said. “I’m serious about it.”