If you are having problems accessing today’s e-Edition, please click on this link VIEW E-EDITION
By JOHN L. SMITH LAS VEGAS REVIEW-JOURNAL
May 7, 2013 - 11:44 pm 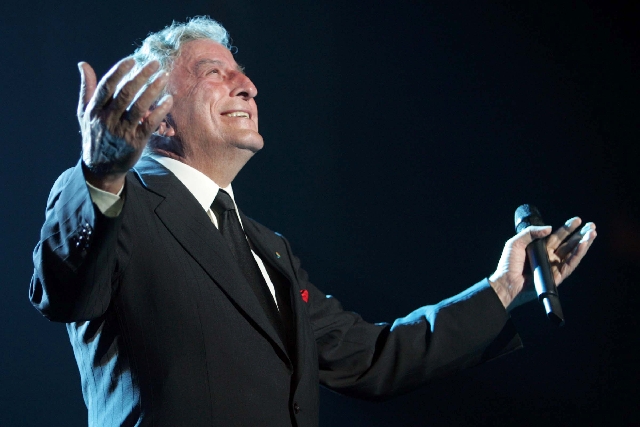 The concert was hours away, but Rose Meranto dressed early for her Friday evening date at the Colosseum at Caesars Palace.

Anticipation mixed with schoolgirl anxieties as she thought of all he had meant to her over the years. Life’s joys and heartaches, and the best of good times: He had been there for all of it, and had always been a perfect gentleman.

In fact, he welcomed Rose and her husband, Rocky, to Las Vegas when the Merantos arrived in Southern Nevada in the early 1960s from Niagara Falls, N.Y., in search of work and a fresh start. On those long nights after Rocky’s death, he sometimes sang Rose’s broken heart to sleep.

She had been looking forward to this night for more than six decades, but what if it didn’t go well? What if time had changed him? Would it ruin the fantasy?

Her nervous excitement was understandable.

It’s not every day a girl goes out with Tony Bennett.
Rose could be forgiven for barely noticing that another 4,000 of us were along on her date. She was focused on the man whose music touched her heart.

Tony Bennett shows us what we mean to him every time he approaches the microphone. How can we express in words what he means to us?

“To me, he personifies class in his music,” she said. “I was always an aficionado of jazz. He personifies classy jazz. I have loved his music since the moment I first heard ‘Boulevard of Broken Dreams.’ I about flipped out at that time. I loved it. I’ve been one of his fans ever since.”

That was more than 60 years ago. But until Friday night, she had never seen him in concert. She was afraid it might break the spell, but instead the experience left her even more spellbound.

With an impeccable jazz quartet backing him, Bennett spent more than an hour strolling the boulevard of his amazing career. His voice was incredible, and not just for an 86-year-old. He brought out the poetry in songs he has sung thousands of times and transformed the showroom into an intimate setting.

Men and women whispered his lyrics as he warmly wound through a slice of a staggering parade of standards. Eyes were wet as memories of loves cherished and lost floated through the Colosseum.

Tony Bennett at Caesars? It wasn’t a concert, but a popular music pilgrimage. It’s not every day people get to hear the man who has provided the soundtrack to the best years of their lives.

And it’s even better when he turns out to be the unassuming gentleman you always hoped he would be.

Between songs, Bennett recalled how he got his big break.

“Rosemary Clooney and I were the first American Idols,” he said, explaining how they landed an appearance on an amateur show in the early days of television. Pearl Bailey saw the show and introduced them to Bob Hope, who took them on the road.

“He changed my life, you know,” Bennett said in a voice filled with gratitude.

“He said, ‘What’s your name?’ I said, ‘Joe Barry,’ ” Bennett recalled. “He said, ‘You’re Italian descent. What’s your real name?’ I said, ‘Anthony Dominick Benedetto.’ He said, ‘Well, that’s a little long for the marquee. Why don’t we compromise and call you Tony Bennett.’ Bob Hope gave me my name.”

Bennett then launched into a rendering of Hank Williams’ “Cold, Cold Heart” that was filled with the longing of the unrequited suitor. Old standard, fresh emotion: That’s our Tony.

The review from Rose?

“Because I’d built up this image of him, I was so afraid that something might spoil the image,” she said. “He surpassed any image I could have had in my mind. I loved it. It was just absolutely beautiful. I melted.”

Although she knew her date with Tony Bennett couldn’t last forever, it did reach three encores.

She was speaking for everyone in the place.