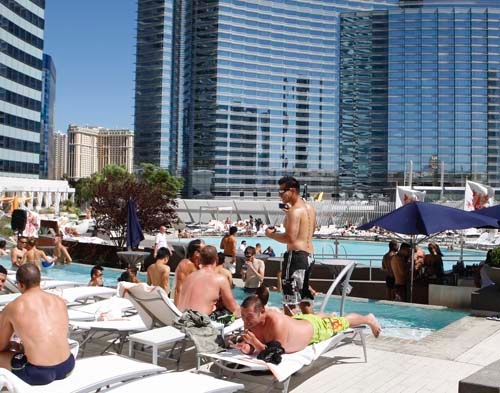 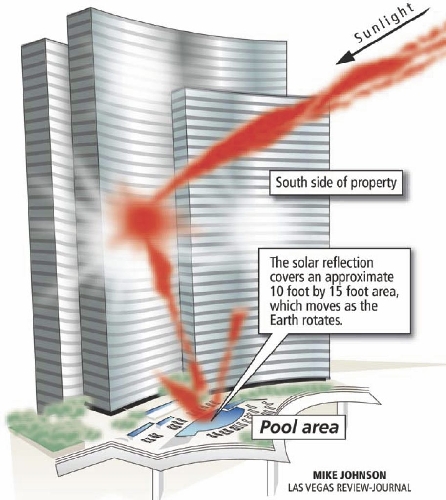 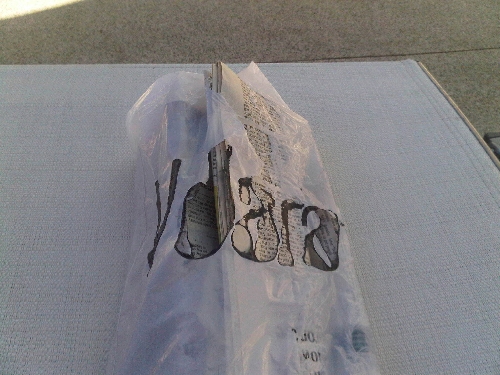 The tall, sleek, curving Vdara Hotel at CityCenter on the Strip is a thing of beauty.

But the south-facing tower is also a collector and bouncer of sun rays, which — if you’re at the hotel’s swimming pool at the wrong time of day and season — can singe your hair and melt your plastic drink cups and shopping bags.

A spokesman for MGM Resorts International, which owns Vdara, said he prefers the term “hot spot” or “solar convergence” to describe it. He went on to say that designers are already working with resort staff to come up with solutions.

Designers foresaw the issue, and thought they had solved it by installing a high-tech film on the south-facing glass panes, according to Gordon Absher, the MGM spokesman. The film scatters more than 70 percent of reflected rays. But that’s not enough, Absher acknowledged, as some pool guests are still uncomfortable.

Chicago visitor Bill Pintas experienced Vdara’s “death ray” recently. A lawyer, he was here on business for Preferred Capital Lending, which he co-owns. He also co-owns a Vdara condo.

Pintas told the Review-Journal that at midday Sept. 16, after a brief dip in the hotel pool, he was sunning on a recliner. He was on his stomach, relaxed, eyes closed.

But suddenly, the lawyer became so uncomfortably hot that he leaped up to move. He tried to put on his flip-flop sandals but, inexplicably, they were too hot to touch. So he ran barefoot to the shade.

“I was effectively being cooked,” Pintas said. “I started running as fast as I could without looking like a lunatic.”

Then he smelled an odor, and realized it was coming from his head, where a bit of hair had been scorched. It was about 12:20 p.m., as best Pintas can recall.

Taking brief refuge at the pool’s bar area, Pintas chatted with employees. He said they chuckled when he described what had happened. “Yes, we call it the death ray,” he says they told him. Sometimes it causes disposable drink glasses to melt, a cocktail waitress added.

After the intense reflection had passed, Pintas returned to his lounge chair. He remembered that a patron nearby laughed, and said something like, It got you, too?

Then he noticed something more — a flimsy plastic bag holding his newspaper had partially melted. The portion of bag bearing the name Vdara had entirely melted away. Holes marked where the letters, in black ink, had absorbed the heat. Pintas snapped a photo of the bag, which he shared with the newspaper.

After Pintas’ experience, a Review-Journal reporter went to the Vdara pool twice. Employees did not know they were talking to a reporter.

The “hot spot” was visible during one of the visits, but no guests were in its reach. An employee pointed out the zone and said it was “like a magnifying glass that shines down” over a space about 10 feet by 15 feet, which moves as the Earth rotates. At this time of year, the bright reflection is present for about an hour and a half, both before noon and after, according to the young man.

The Review-Journal’s other visit was well past noon, so the phenomenon was gone. But several employees recognized the “Vdara death ray” nickname, and readily spoke about the effect.

“It’s basically a glare,” said one.

“It’s like 20 degrees hotter” wherever the reflection is hitting, another one said.

Pintas disagrees strongly with the “glare” terminology. Does glare “painfully heat your hair (and scalp)?” he asked in an e-mail after he returned to Chicago. “Glare sounds like what a politician or insurance attorney would call it. …

Pintas’ theory is that Vdara’s curved southern wall acts as a parabola to collect and intensify the afternoon rays, which it then reflects.

Viewed from above, the Vdara tower resembles a crescent. The crescent’s southern-facing side is concave. There is no tall building farther south to block the sun’s hot afternoon rays, so Vdara receives the full brunt. Its pool lies at the center of this southern-facing wall, on top of a low-rise building that is three stories tall.

A concave reflective surface can act “as a lens,” according to Kerry Haglund at the Center for Sustainable Building Research, which is at the University of Minnesota. But she declined to speculate on whether the Vdara’s wall is acting as one. Sophisticated computer modeling can determine whether its “facade configuration” and “reflective surface” interact in a way that creates a hazard for pool users, Haglund said via e-mail.

The Vdara — and five other CityCenter buildings — are LEED-certified, a prestigious designation that means the buildings are designed, built and operated to conserve resources and to reduce impacts on the environment. Rafael Vinoly Architects designed Vdara.

Pintas said he doesn’t intend to sue Vdara over the reflection issue. But as a condo owner, he worries about the health consequences and expects the hotel to fix the problem.

A new building’s first season of operation always uncovers glitches, Absher also said. Vdara solutions under review include adding more foliage to the pool deck, offering larger sun umbrellas and building a shade structure. But the challenge of constructing shade is that the sun, and the reflection, are moving targets.

CityCenter’s Vdara isn’t the first high-profile structure to reflect brightly. In Las Vegas, both the AdventureDome at Circus Circus and the Mandalay Bay have reflection issues, Absher noted. In early spring, he added, some pool guests at Mandalay Bay even seek out the hot spots, because they are more comfortable for sunning.

In Los Angeles, the Disney Concert Hall — by noted architect Frank Gehry — had to tone down its reflectivity by sanding some of its curving exterior metal surfaces.

Initially, its reflections were raising temperatures in nearby buildings and impairing the vision of passers-by. In 2004, the Los Angeles Times ran a story about the hall, below the headline, “Disney venue reflects badly on downtown.”