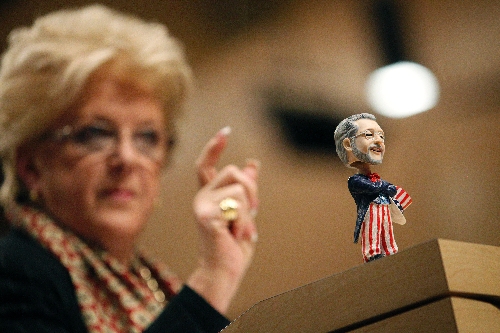 You just can’t be too careful when it comes to handing out discount buffet passes.

For my parents’ semiannual trip to Las Vegas, my mother inadvertently traveled with an expired driver’s license.

To this day, she wouldn’t know it had expired were it not for a helpful, eagle-eyed employee at the Aliante casino.

Mom needed a new player’s card. But after spending 10 or 15 minutes in line, she was turned away because – unlike participating in the willy-nilly, devil-may-care joy of post-9/11 air travel – you’re not allowed to earn slot points without a valid ID.

A pregnant woman went into labor on the seventh floor of the Regional Justice Center Thursday and had to be taken down the elevator on a gurney.

The woman, who said she was carrying twins, told paramedics her water broke.

She was scheduled to appear in court that day, but sometimes there are more important things in life. She was taken to University Medical Center.

Justice of the Peace Eric Goodman, who heard about the incident outside his courtroom and had several defendants no-show that morning, seemed impressed by the woman’s resolve to keep her court date.

“Why can’t I get those defendants?” he said during a recess. “Even when they’re giving birth they show up.”

Last week’s Nevada Gaming Control Board meeting turned into a geography lesson about Gibraltar, a British territory roughly 2.6 square miles in size and home to one of Europe’s online gaming hubs.

Spielo International, a subsidiary of Italian gaming company Lottomatica Group, is headquartered on Gibraltar. One of Spielo’s directors, Sean Randall, was born and raised on the island and still lives there, one of roughly 30,000 residents.

“You kind of know everyone there?” Gaming Control Board Chairman A.G. Burnett asked.

TWEET OF THE WEEK: @lscvegas (Review-Journal business writer Laura Carroll, reporting from the Consumer Electronics Show) My favorite part about #2013CES: lines for men’s room and none for the ladies’.