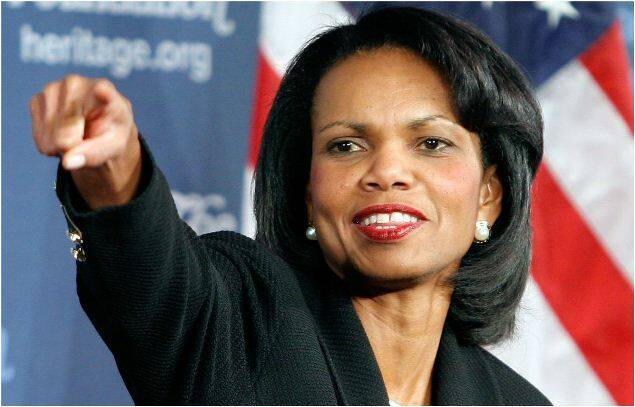 I was watching “The View” the other day, and while I’d normally come away from that experience scarred by the smirking face and screeching cackle of Joy Behar, this time was different. This time there was a woman with a brain at the table. This time, it was more than just a group of caffeinated dames pretending to have gravitas when they’re nothing more than Real(ly) Annoying Housewives.

Condoleezza Rice was the guest. This is the first woman of color to fill the role of secretary of state, and only the second woman overall. She’s a concert pianist, an Olympic level ice skater, fluent in Russian, a former national security adviser, the daughter of a preacher and a woman whose dream job was, by her own admission, NFL commissioner.

In short, a perfect human being.

I’ve admired Condi Rice for more than two decades, ever since she entered my consciousness. She would often talk about her father, the Rev. John Wesley Rice, and told a story about him in her speech at the Republican National Convention in August 2000. In the segregated Birmingham of the 1950s, Rev. Rice tried to register with the Democratic Party and was turned away because he was Black. In response, he became a lifelong Republican in 1952. His daughter announced, “My father has never forgotten that day, and neither have I.”

Ironically, the editors of Essence magazine refused to put her on its cover, this woman of immense achievement and grace. This was years ago, even before the Black Lives Matter movement displayed the hypocrisy of those who insist on choosing just which Black lives matter.

Clearly not Ben Carson, world renowned neurosurgeon turned HUD secretary under former President Donald Trump. Certainly not Shelby Steele, whose beautifully nuanced essays on race are ignored while the simple-minded and accusatory tracts of race baiters such as Ibrahim X Kendi are elevated to classics status. Surely not Clarence Thomas, who is increasingly the voice of a principled and constitutionally authentic conservatism on the highest court in the land.

That’s why seeing her on “The View” was such a gift, especially since she’s been out of the public eye for such a long time. Add to that the fact that we’ve been force fed narratives of women who are independent because they whine about reproductive rights and cry about the deprivation of birth control and access to abortion, or because they stood up against the sexism of a man such as Trump (but never a Bill Clinton or a Joe Biden) and it’s like manna from heaven to hear her speak. Really, nourishment in the ideological desert.

The conversation on “The View” turned to critical race theory, a favorite obsession with these Women Who Chat.

When asked her opinion about it, this is what the first Black female secretary of state had to say: “I want Black kids to know that they are beautiful in their Blackness, but in order to do that I don’t need to make white kids feel bad for being white.”

When someone like me, a white woman from the suburbs of a majority minority city says something like that, she gets tarred as a racist. That’s just the way things are played these days, and I’m used to it.

But when someone such as Rice makes those same comments, you need to listen. You realize that this is no longer a Black and white issue (excuse the unavoidable pun.) It’s not about left and right, right and wrong, Democrat and Republican. It’s about the truth, that thing that keeps getting lost in the shuffle these days between competing interests and 140 characters.

Condoleezza Rice knows what discrimination looks like. She learned about it from her father, who was turned away by the Democrats and found a home with a party that later made his daughter secretary of state. She also knows what it looks like in the present day, denied her rightful place in history by men and women who measure a person’s worth by the level of their liberalism.

To hear Rice say that she doesn’t think white children need to be vilified so that Black children can be honored sounds an awful lot like something another reverend who spent time in Birmingham observed, several lifetimes ago: What matters is not the color of our skin, but the content of our character.

That’s a lesson the lightweights on “The View” needed desperately to hear.

— Christine Flowers is an attorney and a columnist for the Delaware County Daily Times. Contact her at cflowers1961@gmail.com.