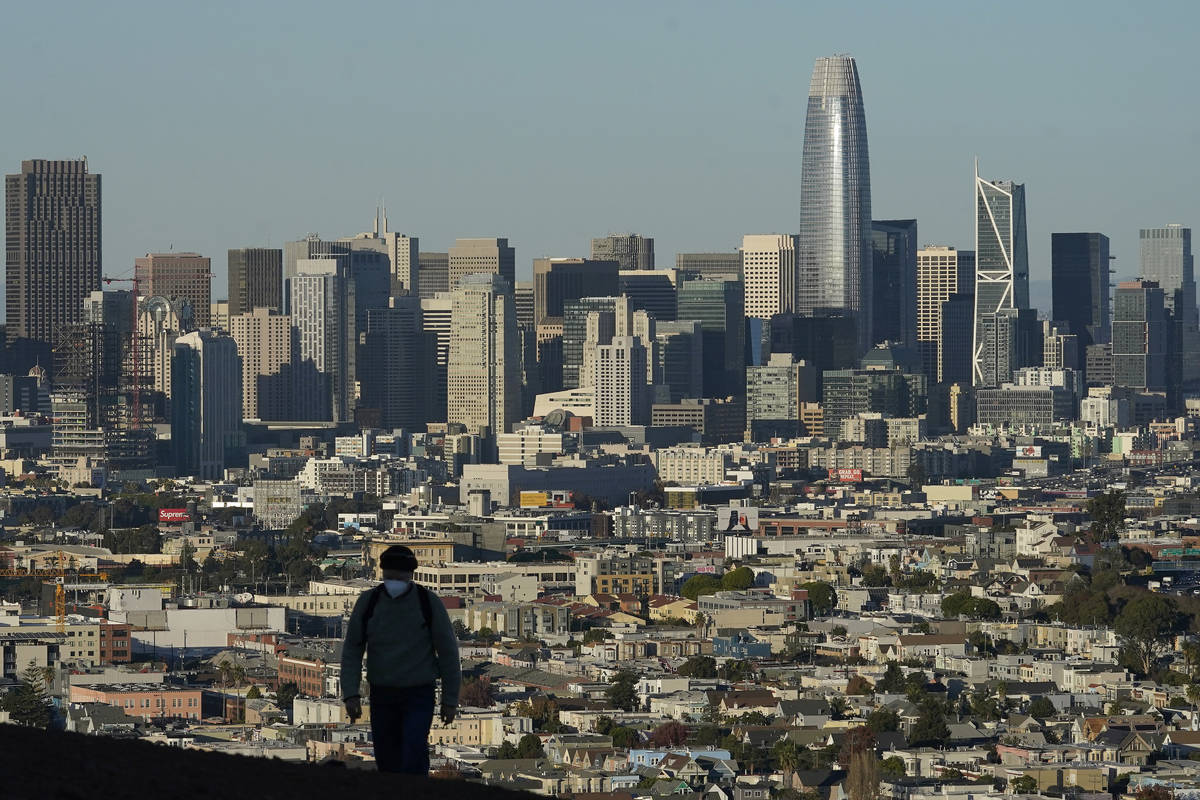 FILE - In this Dec. 7, 2020, file photo, a person wearing a protective mask walks in front of the skyline on Bernal Heights Hill during the coronavirus pandemic in San Francisco. California's population has declined for the first time in its history. State officials announced Friday, May 7, 2021, that the nation's most populous state lost 182,083 people in 2020. California's population is now just under 39.5 million. (AP Photo/Jeff Chiu, File)

In response to lousy service, customers can vote with their feet. As it turns out, stores can do the same thing in the face of rising crime.

Retail giant Target recently began closing its San Francisco stores early. Stores outside the city will remain open until 10 p.m. Its five locations inside the city limits, however, will close at 6 p.m.

“For more than a month, we’ve been experiencing a significant and alarming rise in theft and security incidents at our San Francisco stores, similar to reports from other retailers in the area,” Target spokesperson Brian Harper-Tibaldo said in a statement, according to a Bay Area television station.

For now, Target says the hours reduction is temporary. Walgreens, another ubiquitous chain store, has closed 17 locations in San Francisco over the past few years. The driving factor behind those closures was rampant theft. It still has more than four dozen stores in the city. The company said the level of theft in its San Francisco stores is four times its national average. Security expenses are also 35 times higher. CVS reported similar problems with theft.

Crime has expanded to higher-end retailers as well. A viral video showed a group of looters running out of a San Francisco Neiman Marcus holding expensive handbags. San Francisco Supervisor Ahsha Safai responded to the video with a warning. “We lost the flagship Gap in Union Square,” he tweeted. “If we don’t deal with organized retail crime, I fear many other stores will close.”

Organized criminal organizations conduct much of the theft. CVS estimated that professional criminals accounted for more than 80 percent of its losses.

A major reason for this rampant lawlessness is the state’s Proposition 47, a 2014 initiative that made shoplifting items worth less than $950 a misdemeanor instead of a felony. In May, Safeway blamed the initiative for “dramatic increases” in retail theft. This isn’t a recent complaint. In 2016, major retailers noted that shoplifting increased markedly after the voters approved the ballot question.

Proposition 47 applies statewide. The positive spin is that other regions in California haven’t seen such high-profile pullouts from businesses. Perhaps the density of the San Francisco area means organized shoplifting rings won’t set up in other parts of the states. The negative take is that San Francisco is a harbinger of things to come for other parts of California.

Either option should serve as a warning to Nevada policymakers. There’s nothing wrong with trying to clear the jails of nonviolent offenders. But advertising that certain types of criminal acts won’t be pursued or prosecuted shows a disregard for law-abiding citizens and is an open invitation to habitual criminals and a recipe for neighborhood decline.

Will the last retail outlet in San Francisco please turn out the lights?