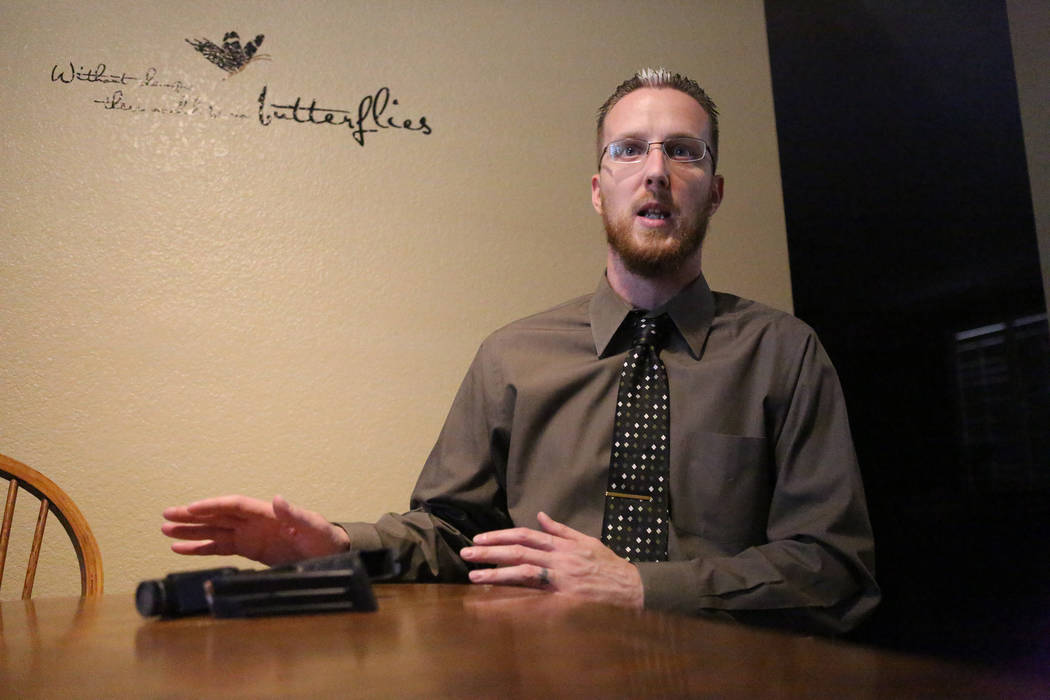 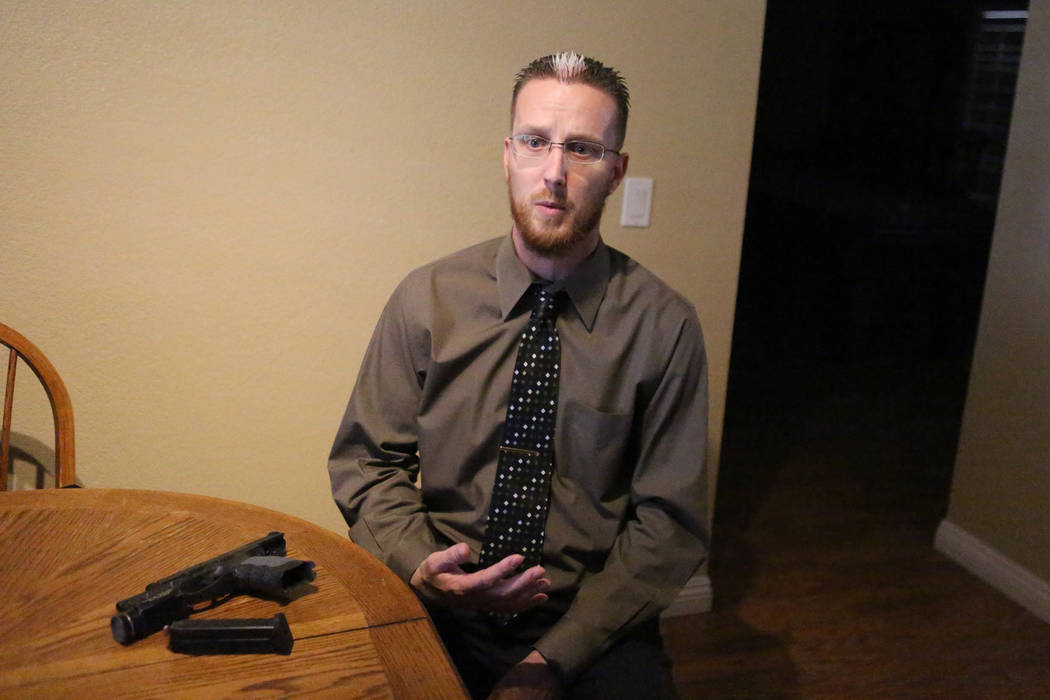 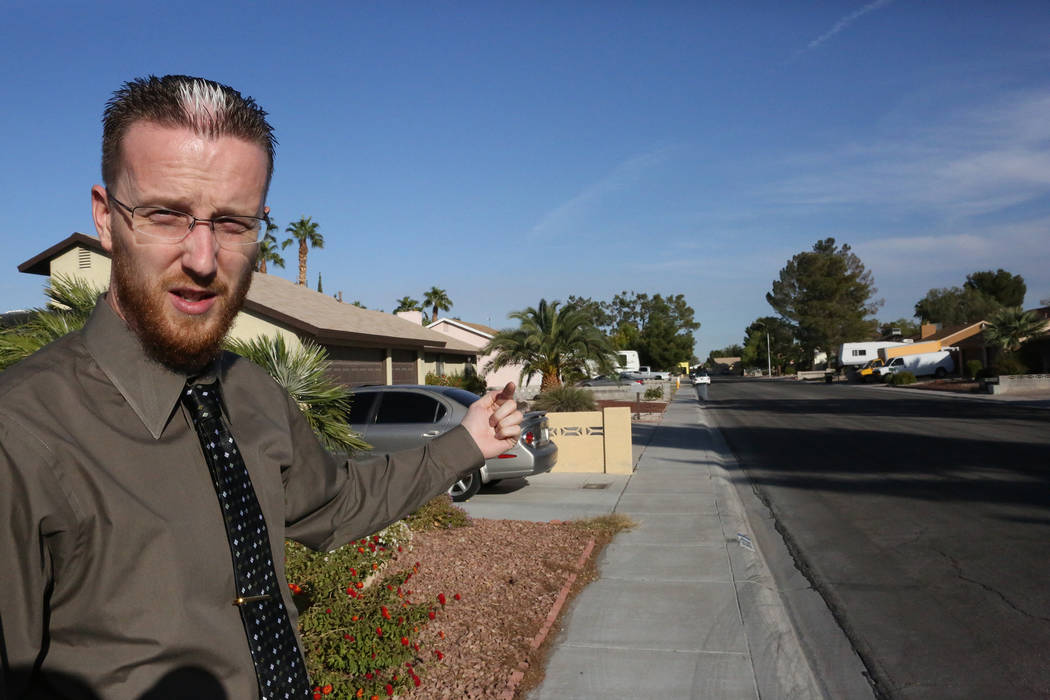 On Monday, Oct. 16, 2017, Justin Pearson, who is a concealed carry weapons permit holder and helped thwart a child kidnapping, explains how a kidnapper raced down his street in Las Vegas. Michael Quine Las Vegas Review-Journal @Vegas88s 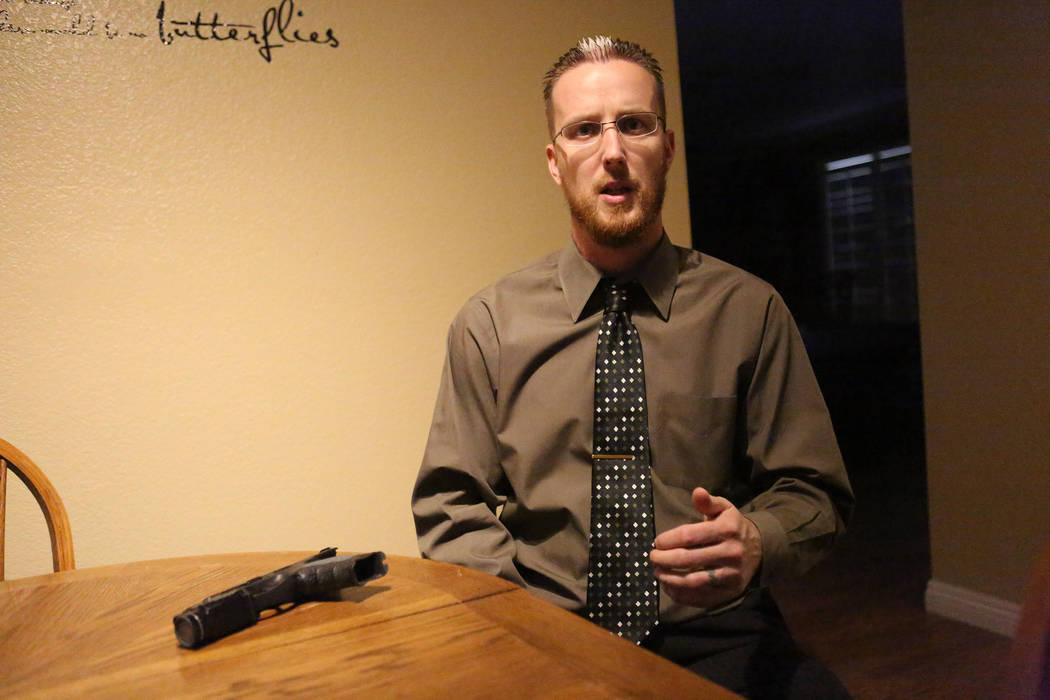 It was habit, not heroism, that caused Justin Pearson to grab his gun.

But seconds later, that weapon enabled Pearson to stop a kidnapping taking place just outside his Las Vegas home on Oct. 5.

As he always does before leaving his house, Pearson, a concealed-carry weapon permit holder, put his pistol on his hip. The 911 operator asked for a license plate number, so Pearson moved down the street to get it.

“He had lost control of the car and almost went into a house at the end of the street,” Pearson said. The BMW then turned around and stopped in front of a neighbor’s yard, where a 6-year-old boy was standing.

“About 50 yards in front of me, the driver grabs this young child and starts stuffing him in the car,” Pearson said.

“‘Holy crap, he just took a child, and he’s trying to stuff him into the car!’” Pearson remembers telling the operator.

Pearson is 6-foot-4 but makes a beanpole look stocky. The kidnapper, Pearson recalls, was a similar height, but was a “solid” 250 pounds.

“He was a very big dude, and I’m not a menacing person by any means,” Pearson said. “I don’t think I could have physically stopped the guy. It would have been super ugly if it was just me versus him.”

“I carry a concealed firearm everywhere I go,” Pearson said. “I lifted up my shirt and put my hand on my gun.”

“‘Hey, stop!’ I said, real loud. He turned and looked at me. There was just enough of a delay for the kid to get out of the car. I know he saw the firearm.”

With the boy out of the car and an armed citizen staring him down, the man decided to drive away. Pearson and his still-holstered pistol stopped a kidnapping. Police wouldn’t arrive for 17 minutes.

“If I didn’t have a firearm, I don’t think there’s much I could have done,” Pearson said.

A Metropolitan Police Department spokeswoman confirmed many of the details in Pearson’s story, including the date, time and location. Pearson said — and Metro confirmed — that the would-be kidnapper was the boy’s biological father, who didn’t have parental rights or permission to take the child.

This isn’t the first time Pearson has used a firearm to stop a crime.

“Many years ago, I was carrying and a guy pulled a knife on a friend of mine,” Pearson said. “I quickly drew my firearm, and the kid ran away.”

These kinds of stories rarely make the news. But they happen more often than we realize and underscore an important point. Concealed-carry weapon permit holders prevent crimes.