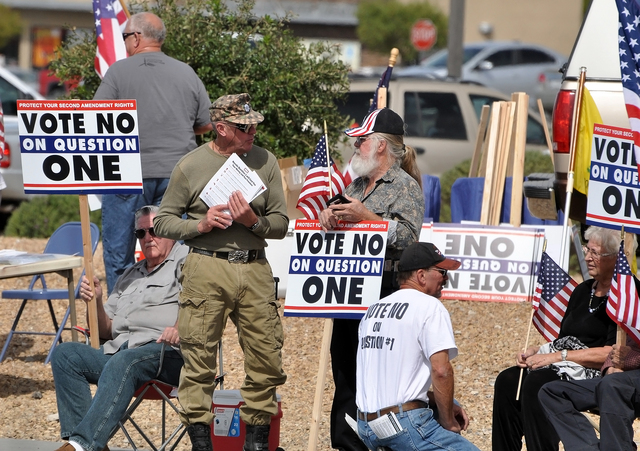 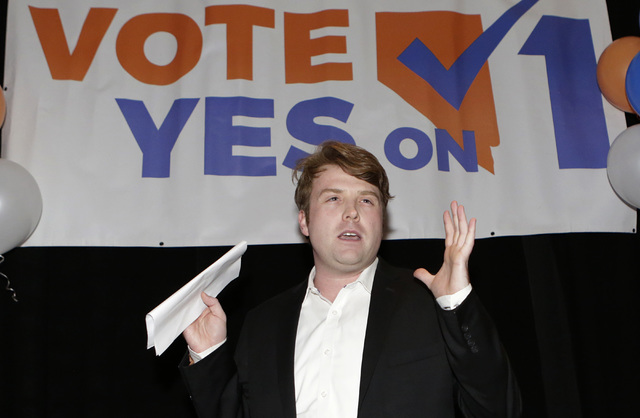 Joe Duffy, Yes on 1 campaign manager, speaks to the pro-background checks before a gun sale or transfer groups during a watch party at Cucina Restaurant Tuesday, Nov. 8, 2016 in the Crystals in Las Vegas. Bizuayehu Tesfaye/Las Vegas Review-Journal Follow @bizutesfaye 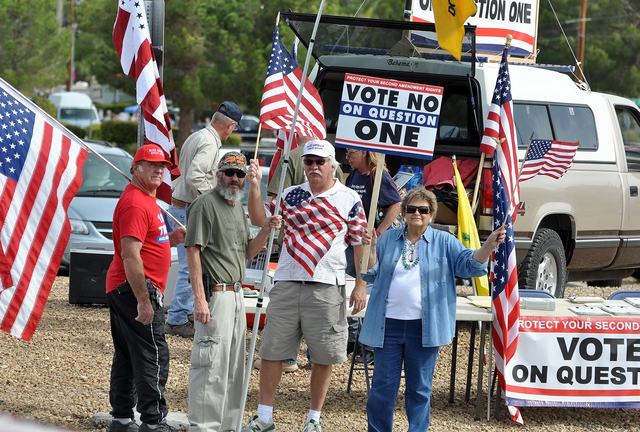 A "Vote No on Question 1" rally was held in Pahrump on Oct. 8 at the corner of Highways 160 and 372. Although Nye County sheriff and district attorney has expressed opposition to the measure to expand background checks for firearms, a new poll indicate strong support for passage statewide. (Horace Langford Jr. / Pahrump Valley Times) 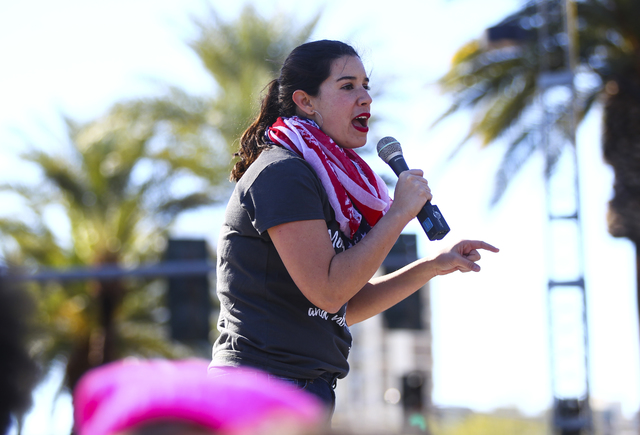 It’s much easier to look for a scapegoat than admit you made a $20 million mistake.

That’s what Nevadans for Background Checks tried to do during a Friday news conference that called on Attorney General Adam Laxalt to enforce its background-check initiative.

“The reason it was written saying that NICS was going to do it, if we did it point of contact through the state, it would have added money to every one of those background checks,” said Elizabeth Becker, spokeswoman for the Nevada Chapter of Moms Demand Action. “We did not want it to be a tax.”

Translated: Background checks wouldn’t have passed if voters knew there would be a cost.

The initiative passed by less than 1 percent. It may have been a necessary political decision, but that choice created a major policy problem. Despite spending almost $20 million on the campaign, initiative backers didn’t ensure that the FBI would be willing to do those checks. Because Nevada has done all background checks since 1998, the FBI announced — after the election — that it wouldn’t spend its money conducting background checks not required by federal law.

This left Nevada Department of Public Safety Director James Wright in a pickle. He asked his legal counsel, the attorney general’s office, for advice on how to proceed. In a Dec. 28 opinion, Laxalt’s office concluded that Q1 isn’t enforceable because “the FBI’s refusal to carry out the central function required by the Act effectuates an unconditional ban, at present, on all private firearm sales or transfers in Nevada. … The Nevada Supreme Court long ago adopted the doctrine that the law does not require impossible acts.”

At their news conference, background-check supporters didn’t quibble with the AG’s legal analysis. Nor did they express regret for the initiative wording or even offer any concrete steps Laxalt could take to change the FBI’s position. Instead, they’re hoping hollow talking points and political attacks will distract the public — and their own supporters — from their incompetence.

“Attorney general, come home and do your job,” said Sen. Yvanna Cancela, D-Las Vegas, who highlighted that Laxalt was speaking that day at the 2017 NRA annual meeting.

She hypocritically failed to mention that she skipped that day’s Senate floor session — her job — to speak at the Las Vegas news conference.

The problem for Nevadans for Background Checks: Laxalt’s lawyers, in doing their jobs, have exposed that the initiative’s lawyers didn’t do theirs.