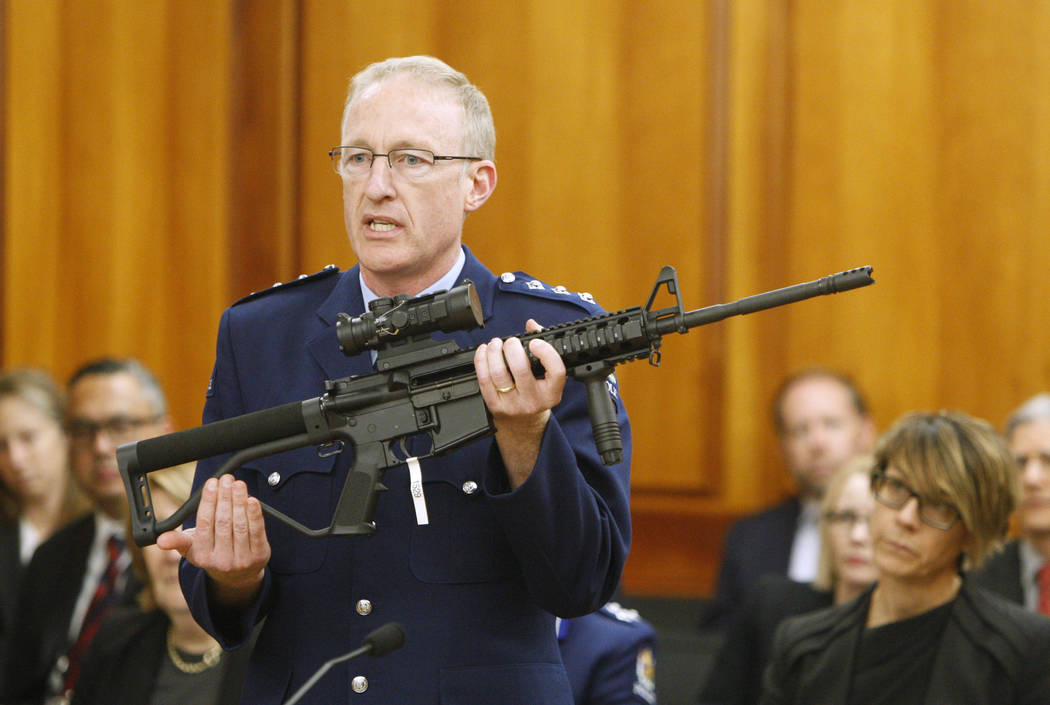 Police acting superintendent Mike McIlraith shows on April 2, 2019, New Zealand lawmakers in Wellington, New Zealand, an AR-15 style rifle similar to one of the weapons a gunman used to slaughter 50 people at two mosques. New Zealand's new gun laws have been signed into law and now ban military-style weapons, just one day after the nation’s parliament overwhelmingly approved legislation to outlaw them less than a month after a man used such guns to kill 50 worshippers at two mosques. (AP Photo/Nick Perry, File)

New Zealand banned most semi-automatic rifles just weeks after horrific shootings this year at two Christchurch mosques. American gun grabbers hailed it as a model for this country. There’s just one problem. The ban isn’t going as planned.

In April, the New Zealand Parliament made it illegal to own a semi-automatic rifle, except .22 caliber or lower rifles that can hold a maximum of 10 rounds. Pump-action shotguns that can accept a magazine are also illegal. Pistols weren’t included in the ban.

GunPolicy.org estimates New Zealanders own up to 1.5 million firearms. That includes 460,000 rifles and 300,000 shotguns. While it isn’t possible to know exactly how many weapons the law banned, it’s safe to assume it was several hundred thousand. Existing gun owners have six months to turn in their weapons or face up to five years in jail.

This non-compliance shouldn’t come as a surprise. In 1996, Australia banned semi-automatic weapons following a mass shooting. Australians sold or handed over 700,000 weapons. That sounds like a lot. It’s not — compared with how many weapons weren’t turned in. Franz Császár, a professor at the University of Vienna, Austria, estimated Australian gun owners illegally kept between 2 million and 5 million weapons.

Nor did Australia’s ban stop the flow of new firearms.

“An increasing number of groups are trafficking firearms,” the Australian Criminal Intelligence Commission wrote in 2016. “The illicit firearms market is driven in part by outlaw motorcycle gangs, Middle Eastern organised crime groups, and other groups engaged in trafficking illicit commodities such as drugs.”

How shocking to find out that criminals don’t abide by the law. In New Zealand, gang leaders are already acknowledging that their members are keeping their firearms.

“Will gangs get rid of their weapons? No,” Sonny Fatu, president of the Waikato branch of the Mongrel Mob, said.

This doesn’t mean it’s dangerous to live in New Zealand. The country already had remarkably few firearm homicides, even including the aberration that was the horrible massacre in Christchurch. In 2015, there were eight homicides committed with firearms in the entire country, population 4.8 million. For the past two decades, years with single-digit firearm homicides have been the norm. For context, Chicago, population 2.7 million, had 335 firearm homicides in the past year.

That comparison makes it obvious that it’s not just the mere presence of a gun that makes a place safe or not. Social, cultural and economic factors matter, too.

At best, gun bans are ineffective, as seen in Australia and New Zealand. Criminals don’t turn over their weapons. Most citizens don’t either. At worst, they’re counter-productive. They take away weapons from those least likely to commit a crime and signal to criminals that their potential victims are unarmed.