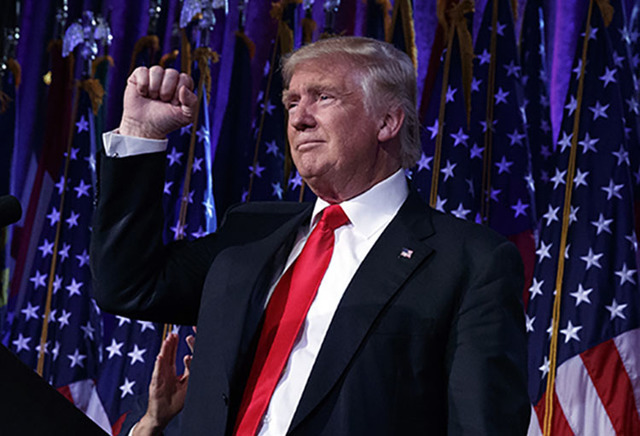 As you read this column, I’ll be in Denver addressing the International Association of Political Consultants conference. My audience will be the top 150 campaign gurus in the world — campaign strategists who have elected presidents and prime ministers around the world. They have asked me to explain how I was able to predict Tuesday’s shocking Donald Trump victory, a win none of the so-called experts saw coming.

They also want to know how I designed the victorious Donald Trump game plan in my book “Angry White Male.”

They are not the only people asking these questions. In the past few days I was on Romanian TV, Australian TV, BBC World News, Israeli TV and Russian TV explaining how I knew Trump would win.

I painted the picture for Trump. I recommended “expanding the tent” in a unique way. I suggested going after 4 million to 6 million working-class and middle-class white voters who rarely or never voted Republican — or never vote at all. People who hunt and fish, love the NFL and believe in God, guns, family, capitalism and the Constitution. People who hate big government and big taxes. People who shut off the TV when athletes disrespect the national anthem. People who are disgusted by anti-police rants. People who are enraged when they hear about college courses called “White Guilt.” People who have been badly ripped off by Obamacare.

People who have had enough and aren’t going to take it anymore.

I wrote that the path for Trump went through Ohio, Pennsylvania, Michigan, Wisconsin and Iowa. He had to literally lead a revolution of angry white voters who have been left behind, denigrated, insulted, disrespected and punished by liberals, big government and political correctness.

Back in June 2015, I was the first to endorse Trump and predict he’d win the election. When I first made that prediction, I was in an exclusive club of two — myself and Donald Trump.

Over the past few weeks, I’ve predicted a smashing Brexit-like Trump victory — even in the face of polls predicting a landslide Trump loss. I was the only commentator who argued the polls could not measure the anger and volatility of the electorate.

And I publicly announced at Fox News that I’d made the biggest bet of my life on Trump at 6-to-1.

How did I know?

1. The betting patterns were exactly the same as Brexit.

2. I understood this was “The Angry White Voter Election.”

3. Trump was “the whisper candidate.” Everywhere I went, strangers whispered in my ear that they loved Trump. They didn’t want anyone to know. They certainly weren’t telling pollsters.

4. Hillary was “the ghost candidate.” Intensity and enthusiasm determine who shows up at the polls. If no one was at Hillary’s rallies or buying her book, her voting turnout would surely suffer.

I knew something special and shocking was about to happen. Democrats, the GOP establishment, career politicians, crony capitalist CEOs, Ivy League eggheads and the biased, corrupt mainstream media never had a clue what was about to hit them.

Millions of angry white voters made this possible. This was our Brexit, starring Donald Trump. I called it “Trexit.”

It was the bet of my life. And it paid off.

Wayne Allyn Root is a best-selling author and host of “WAR Now: The Wayne Allyn Root Show” from 3 to 6 p.m. daily at 790 Talk Now. His R-J columns run Wednesdays and Sundays.