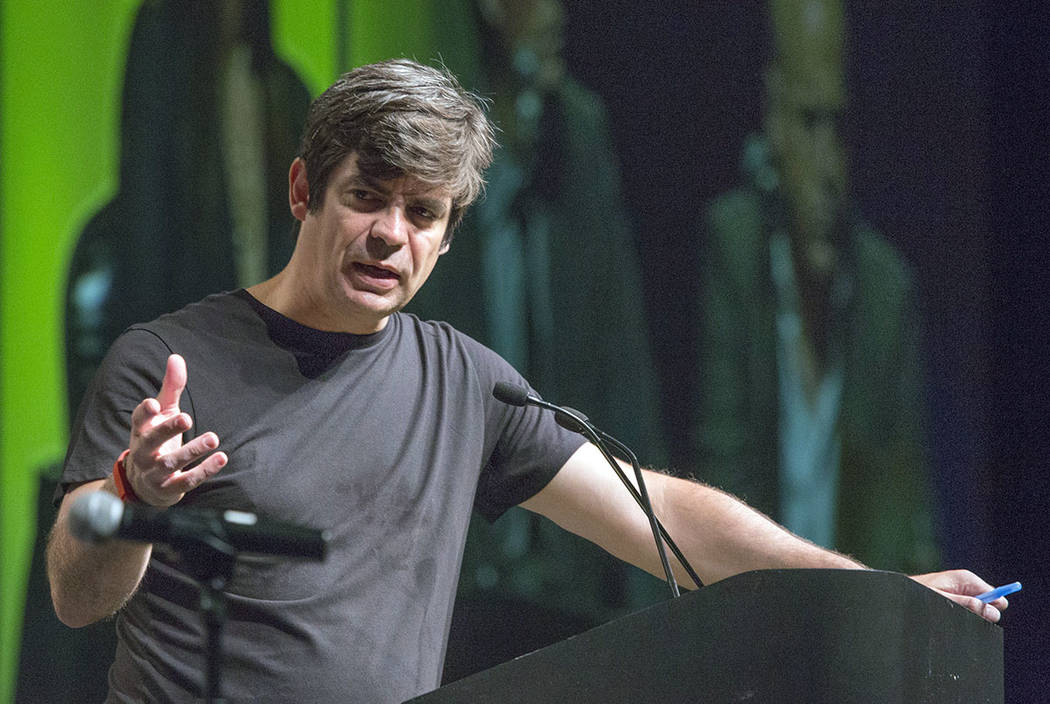 Editor and author Nick Gillespie moderates a panel discussion during FreedomFest in 2014. Gillespie is scheduled to speak at FreedomFest 2019. (Las Vegas Review-Journal)

I have a busy week coming up. On Wednesday I’m the opening speaker at FreedomFest at Paris Las Vegas. On Friday, I’ll be part of a debate at the conference about open borders, illegal immigration and the Trump wall. My debate partner is the famous Candace Owens, a rising star in the conservative movement.

FreedomFest is an annual event that attracts more than 2,500 freedom-lovers from across the country. It is billed as the “biggest liberty conference of the year where free minds meet to celebrate ‘great books, great ideas and great thinkers’ in an open-minded environment.” Among the 200 speakers will be Review-Journal editorial cartoonist Michael Ramirez, Penn Jillette, John Stossel, Herman Caine, Sen. Mike Lee, Alan Dershowitz and federal judge Douglas H. Ginsburg.

Candace Owens will also have a high profile at the event. What’s so special about Owens? She is the brilliant, beautiful, youthful creator of “Blexit,” a movement dedicated to getting black Americans to exit the Democrat Party — a party that has done nothing for African-Americans except lower expectations and relegate them to poverty and government dependency.

We’re a good pairing because I’m the guy who created “Jexit.” I believe this is the moment for Jews to exit the Democrat Party.

Democrats are led by radical socialist Reps. Alexandria Ocasio Cortez, Ilhan Omar and Rashida Tlaib (among many others). They feel more at home among terrorist-supporting organizations such as CAIR and the Nation of Islam than among patriotic Americans.

But it’s not just hate speech coming from prominent Democrats that should scare American Jews. It’s the dead silence that is most alarming. In Nazi Germany, I’m sure only about 20 percent of Germans actually participated in the enslavement and murder of my ancestors. But the other 80 percent let it happen. They said nothing.

Today, there are prominent Democrats who use hate speech versus Jews, root for the destruction of Israel, denigrate 9/11 and even sneer at Holocaust survivors. Sure, that’s only about 20 percent of Democrats. However, few of the other 80 percent say anything in response.

But the battle of capitalism versus socialism should be even more important to my fellow Jews. How can Jews support a Democrat Party that is openly radical socialist, bordering on communist?

Why should Jews fear socialism? Because Jews have never fared well in a socialist or communist country. Nazi Germany was led by Hitler’s “National Socialist German Workers’ Party.” How’d that work out for Jews?

Do you think Jews fared any better in East Germany? The Soviet Union? Cuba? Venezuela? No matter the country, Jews are always the target in socialist and communist countries.

Why? Because Jews are educated, outspoken and successful. All good socialists hate the people with wealth and success. They are jealous thugs. Socialists always persecute the business owners, the educated, the outspoken.

Any Jew who thinks it will be different this time is delusional. History not only repeats, it rhymes.

It’s clearly time for all Jews with common sense to break free from the Democrat Party. Just like Candace Owens dreams of Blexit for blacks, I dream of a Jexit for Jews.