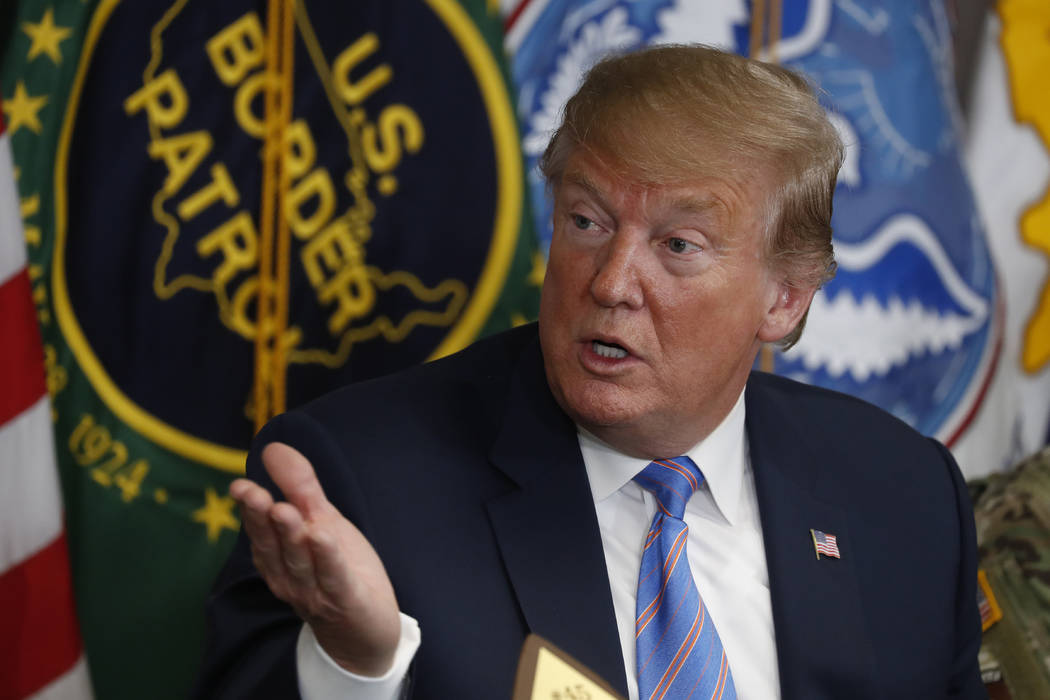 President Donald Trump participates in a roundtable on immigration and border security at the U.S. Border Patrol Calexico Station in Calexico, Calif., in 2019. (AP Photo/Jacquelyn Martin)

Over three years and about 300 Review-Journal columns, I’ve argued that Democrats aren’t just radical, extreme and crazy, but dangerous too. They are a danger to themselves and to the rest of us. Their obsession with open borders is going to get us killed.

I wrote recently about an undocumented immigrant in Oregon who raped a small dog to death. The liberal Democrats of Oregon — a sanctuary state — are so obsessed with doing anything and everything to help undocumented immigrant criminals, they refused to turn this dog rapist and murderer over to U.S. Immigration and Customs Enforcement. They let him walk right out the front door of the courthouse, after being found guilty of raping and murdering a little dog.

I recommended to President Donald Trump that this dog rapist and murderer, Fidel Lopez, become “the Willie Horton of 2020” — that is the star of Trump’s re-election TV ads.

Except I’ve found a new Willie Horton. It seems like liberals produce a new one every day. But this one stands out, just like the dog rapist and murderer.

“Willie Horton, Part Deux” is Hodan Nalayeh, a Muslim journalist and a big fan of Ilhan Omar, the Muslim-Somali congresswoman from Minnesota who can’t stop attacking, denigrating and spewing hate speech at America, 9/11, Jews and Israel.

Omar is so obsessed with Jew-hatred, she raged against Jews and Israel even louder after our president called her out for being a radical, extreme Jew-hater. Omar immediately put out a House bill to make it legal to boycott Israel and compared Jews to Nazis, the Soviet Union and South African apartheid.

So, Nalayeh traveled to Somalia, birthplace of Ilhan Omar, to conduct interviews and film videos. She spent two weeks tweeting out how wonderful Somalia was.

Until … Muslim terrorists burst into her hotel and murdered 26 people including Nalayeh, her husband and her unborn child.

Nalayeh got herself and her entire family killed with her ignorance. Somalia isn’t a nice place. We should not be in a hurry to let people from violent, terror-filled countries into the U.S. We have to be choosy who we let in our country.

Nalayeh’s death is Exhibit A for the need for caution, extreme vetting and a very big wall.

Nalayeh’s story proves liberal Democrats are a danger to themselves and the rest of us. Their crazy ignorance could get us all killed.

Wayne Allyn Root (Wayne@ROOTforAmerica.com) is host of the nationally syndicated “WAR Now: The Wayne Allyn Root Show.” Listen from 3 to 6 p.m. daily at 790 Talk Now and watch at 5 p.m. on Newsmax TV, now on DirecTV and Dish.