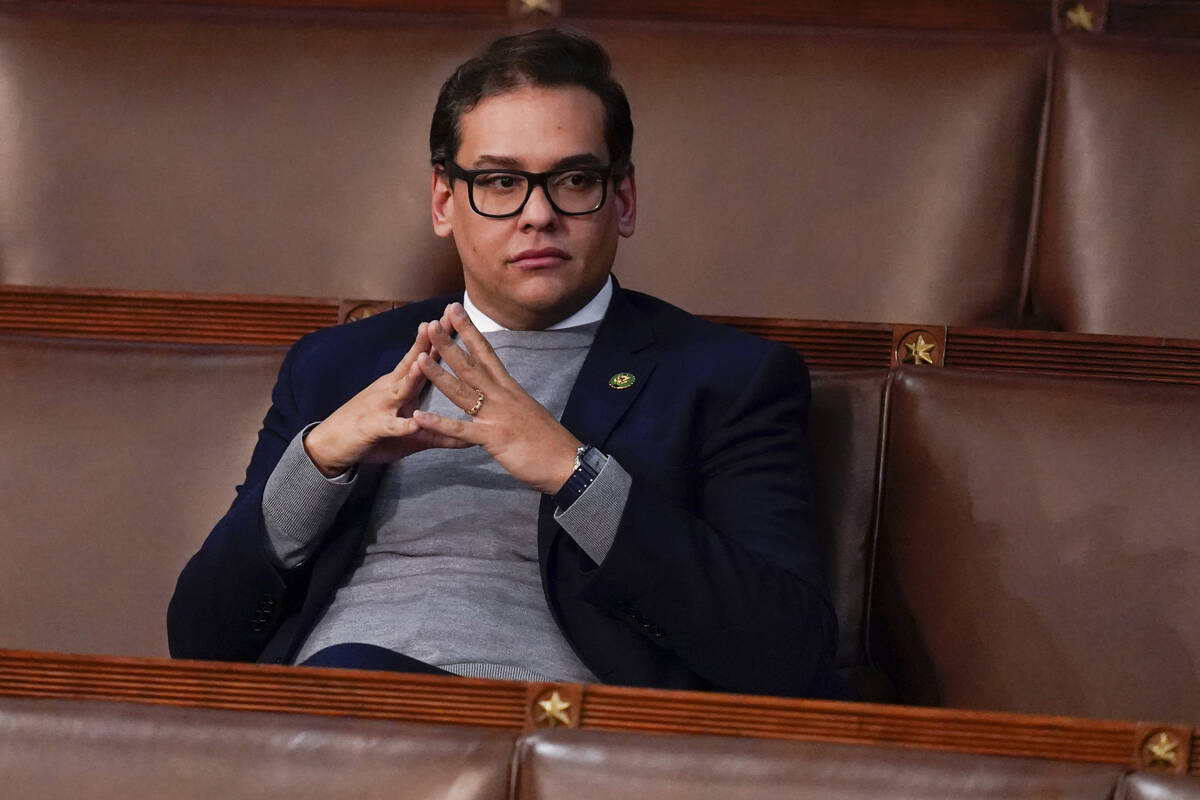 Rep. George Santos, R-N.Y., waits for the start of a session in the House chamber as the House meets for the fourth day to elect a speaker and convene the 118th Congress in Washington, Friday, Jan. 6, 2023. (AP Photo/Alex Brandon)

I’ve tried. I’ve really tried. But I just haven’t been able to get worked up over the tall tales of George Santos.

When I start to pay attention to the misstatements and misadventures of the 34-year-old misfit Republican congressman from Long Island, I just lose interest.

In case you missed it, the openly gay son of Brazilian immigrants and new member of the House has rankled Democrats and Republicans alike by being a habitual liar.

I know what you’re thinking. Because I’m thinking the same thing: The fact that he lies with ease disqualifies him from serving in Congress? I would think it would make him a perfect fit.

I’ve covered politicians for nearly 35 years, so take it from me: Politics is all about deceit and deception. Many politicians, if not most, lie to get elected. Then, once in office, they lie some more to stay there. Often, the folks they’re lying to are their own constituents.

Maybe that’s why I’ve had such a difficult time getting excited about this story — or, to be honest, even moderately interested in it — with so much else going on in the world.

Whether it’s Kevin McCarthy’s brutal House speaker promotion or President JOE Biden’s handling of classified documents, it all seems more interesting than the shenanigans of one baby politician.

Democrats complain that Santos has not been held accountable — and won’t be, because, in a closely divided House, Republicans need every vote.

Indeed. To say that Santos is getting off easy is putting it mildly. He was recently appointed by McCarthy to serve on the House Science and Small Business committees.

I think I know why Santos believes he can ride out the storm. It’s because most Americans get the joke. They understand that members of Congress are the last people on Earth with the moral authority to judge the integrity of fellow members.

I have a hard time not rolling my eyes or snickering when I read a headline that blares, “Congressman accused of lying.”

That’s goofy. What’s next? “Scorpion accused of stinging”? How do we fault a species for doing what is in its nature? Or, in the case of Santos, how do we condemn people for doing something that is practically in their job description (i.e. lying), especially while giving a pass to others who have told even bigger lies?

By the way, Americans wouldn’t have to contend with the Santos circus if his Democratic opponent in the November election, Robert Zimmerman, had compiled better opposition research or if the media outlets that are now producing Santos hit pieces had dug deeper before the vote.

Sadly, much of the liberal media aren’t grasping the hypocrisy of having a bunch of politicians accuse one of their own of lying. They’re too busy trying to portray Santos as this strange anomaly, the likes of which we’ve never witnessed.

Really? One of the first accusations against the congressman was that he lied on his résumé, claiming that he went to a certain college and worked for a certain company even though people at both had never heard of him. Santos has apologized for what he calls “résumé embellishment.”

One example is Sen. Tom Cotton, R-Ark., an Army veteran who has long bragged about being an Army Ranger because he went through an eight-week “Ranger School” that any member of the armed forces can join and that awards graduates a black-and-gold Ranger tab. That’s not the same as being part of the 75th Ranger Regiment, whose members wear distinctive tan berets and receive a red-white-and-black Ranger scroll after undergoing more intensive training.

Margaret Brennan is on the right track. The host of CBS News’ “Face the Nation” recently interviewed Rep. Daniel Goldman, D-N.Y., a freshman who filed an ethics complaint against Santos. Noting that various members of the House and Senate, in both parties, have faced federal investigations or been accused of ethics violations and that McCarthy has pointed out that other people have spread falsehoods and remained in Congress, Brennan asked Goldman, “Why is this case different?”

Goldman largely ducked the question, except to say that Santos is a “complete and total fraud.”

No argument there. But let’s be honest. There is one thing that this lying politician isn’t: unique.