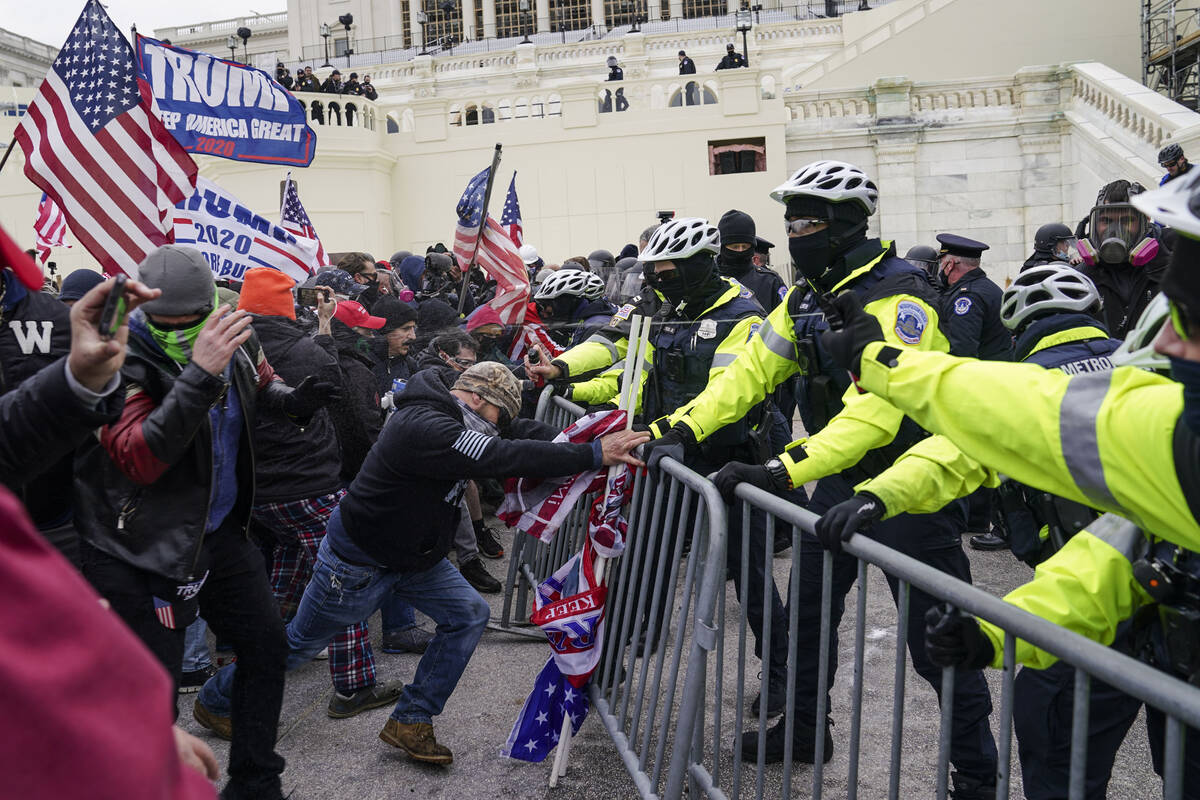 Trump supporters try to break through a police barrier, Wednesday, Jan. 6, 2021, at the Capitol in Washington. (AP Photo/John Minchillo)

As the son of a retired cop who was on the job for 37 years, my bias is against the attempted murder of police officers by violent mobs who attack them with stun guns, baseball bats, hockey sticks and other weapons. I’m also biased in favor of cops using deadly force against criminals and thugs to save their own lives or the lives of other cops.

The media coverage of the recent anniversary of the Jan. 6 attack on the U.S. Capitol was almost entirely — and predictably — about politics.

Liberals called the incident an “insurrection” and a “terrorist attack.” Conservatives insisted that it was neither, and then bashed liberals for using such language. The national bickering goes on.

As someone who grew up around cops, I worry a lot about their well-being. That said, I would have preferred more discussion about an aspect of the uprising that gets short shrift: the toll on law enforcement. The events of Jan. 6 showed the nation, and the world, how the American people have made the job of being a police officer nearly impossible.

Members of the U.S. Capitol Police and the Metropolitan Police Department of the District of Columbia ran toward chaos instead of away from it. That’s what heroes do. And, on that day, these heroic public servants did their jobs well, while showing remarkable restraint.

Too much restraint, if you ask me.

I’m with Sen. Lindsey Graham, R-S.C. According to The Washington Post, as lawmakers were being evacuated from the Capitol, the senator was irate. According to the Post, Graham yelled at the Senate sergeant-at-arms, “What are you doing? Take back the Senate! You’ve got guns. Use them. We give you guns for a reason. Use them.”

Later, on Fox News, Graham confirmed the quotes were accurate.

I’m also onboard with PBS White House correspondent Yamiche Alcindor, who — during a recent appearance on “PBS NewsHour” — suggested that it is likely there would have been more bloodshed had the riot involved African Americans or Latino protesters.

“The memory that sticks most with me, watching the Capitol being attacked, is that sense of entitlement that these white protesters had, to break in,” Alcindor said. “I kept picturing what it might have been like had these people been the protesters that I covered so closely in Ferguson — the Black people that were demanding justice and police accountability. It’s very easy to see those people being shot, frankly, dead on the steps of the Capitol if they were Black or Brown or immigrants. And to see some of the white protesters walk away with their lives … it’s something that sticks with me.”

As a Latino, I feel the same way. But the image of Jan. 6 that really haunts me most is the one instance where I believe officers should have fired their guns.

What seemed to be about two dozen men were pushing with all their might against D.C. police officer Daniel Hodges as he stood trapped in a glass doorway. The mob was crushing Hodges with enough force to cause serious bodily injury or even death. As the helpless young officer screamed in agony, with blood dripping from his mouth, rioters were brazen enough to take off his helmet and face mask and hit him in the head and face with his own nightstick. All the while, at least a dozen fellow officers looked on as they tried to free Hodges.

Watching it on television, this son of a cop was filled with rage.

We know that, elsewhere, protesters attacked other officers while chanting: “Kill him with his own gun!” Had the rioters reached Hodges’ service weapon, that is exactly what one of them might have done.

Some of the Jan. 6 officers say that they feared using their guns would only inflame the situation. That’s always a risk. But, as we saw, not using them is risky, too.

The fact that police officers would hesitate to use deadly force against a mob of violent insurrectionists, even to save the life of a fellow officer, is a problem.

The cops I know would just as soon never fire their weapon. A “good shoot” still means mountains of paperwork and a mandatory internal investigation. A bad one could mean a possible firing or civil lawsuit. Often, that’s why cops hesitate.