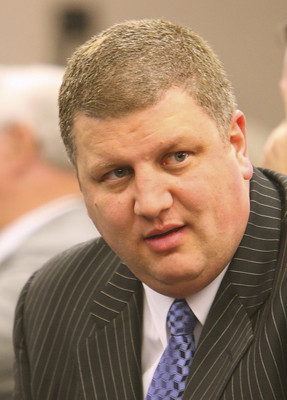 Like a moonshot sailing out of Cashman Field, the alien logo and team name of the Las Vegas 51s will be sent back to outer space next season by the ballclub’s new owners.

The city’s 25-year-old Triple-A baseball franchise will wear new blue hats, bearing a raised blue-and-white LV on the bill, at times this year, and the team will take on a new name after this season.

"We’re the 51s for the 2008 season, but after that, I’ll be honest, I’m not the biggest fan of the 51s name," said Derek Stevens, CEO of the Stevens Baseball Group, which bought the franchise from Mandalay Baseball Properties in a deal approved last week. "We want to come up with another name, and that’s something we’d like to target for the 2009 season."

Stevens said he plans to let the public pick the new name.

Some changes will be made this year, said Stevens, who will be introduced to the media at a news conference today at Cashman Field. Among them are a new scoreboard featuring a 15-by-36-foot video board, and a new left-field party deck that can accommodate 100 people and has its own bar.

"We want to add a few more entertainment options at games and create another alternative entertainment opportunity in Las Vegas," said Stevens, whose family hails from Detroit and manufactures nuts and bolts for the auto industry.

Stevens, 40, and his brother Greg Stevens, 37, owners of Desert Rock Enterprises, recently completed the purchase of 50 percent of the Golden Gate hotel-casino and will institute the "Golden 10-run rule" at 51s games. Every time the 51s score 10 runs at home, all in attendance will receive a free shrimp cocktail at the Golden Gate.

Derek Stevens said he wants to sell about 25 percent of the team within the next few weeks and has had interest from high-profile celebrities he did not name.

Las Vegas’ affiliation deal with the Los Angeles Dodgers expires after this season, and a renewal could hinge on plans for a new stadium.

"The Dodgers were very clear with us," Stevens said. "The status of the stadium will be the most significant factor in their willingness to extend our affiliation."

While Stevens said "at some point we’re going to need to have a new ballpark" and talked about it in terms of building a dome, he also said "it’s still in the relatively early stages to do something like that" and getting a stadium built would take "a community effort."

If the Dodgers decide to break their affiliation, Stevens sounded confident another big league club would replace them.

"There are 30 major league teams and 30 Triple-A teams, and we will be an affiliate to one of them, irrespective of the stadium (issue)," Stevens said. "We’re still Las Vegas, and Las Vegas is still one of the foremost desirable locations for a Triple-A team."

The 51s will open the season with an eight-game homestand, starting April 3 against Salt Lake.