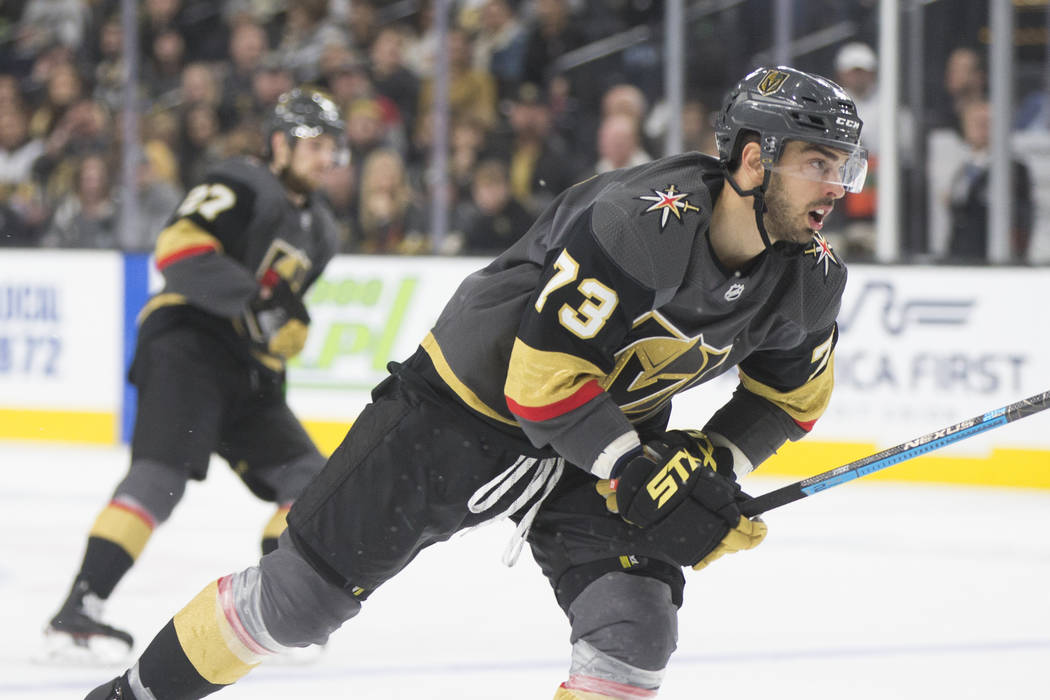 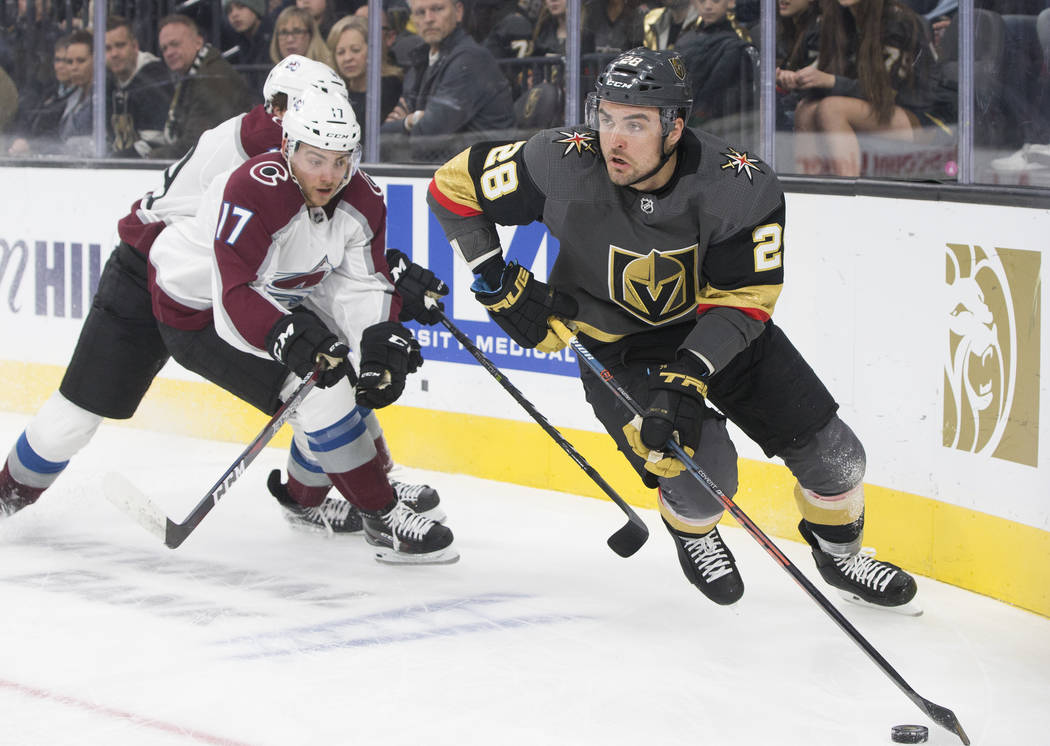 Brandon Pirri played one game with the Chicago Wolves after the Golden Knights sent him to the American Hockey League last week.

He scored a goal. No surprise there.

The forward also instigated a fight with San Antonio’s Sammy Blais after he delivered an illegal check to the head of Chicago’s Erik Brannstrom that ultimately earned the Blues farmhand a one-game suspension from the AHL.

Pirri is doing everything he can to impress the Knights, even if that means standing up for one of the franchise’s prized prospects.

He was recalled by the club Monday when forward William Carrier (illness) was placed on injured reserve and will be in the lineup when the Knights host the New York Rangers on Tuesday at T-Mobile Arena.

“I was fortunate to get a look here, and it’s an opportunity for myself to show what I can do,” Pirri said. “I’m enjoying my time here. I’m just trying to get better every day and prove myself.”

Pirri was able to attend his son’s first birthday party Sunday as a result of being sent down Friday, and his latest call-up could be for good depending on what takes place behind the scenes this week.

Carrier sat out Sunday’s 3-2 victory over New Jersey and will miss a minimum of the next two games. Right wing Reilly Smith is listed as day to day with an undisclosed injury after he left early in the third period Sunday.

The game against the Rangers will be Pirri’s eighth in the NHL this season; he remains exempt from waivers until he plays in 10 games, meaning Pirri still could return to the minors.

But after the 27-year-old produced six goals (two game-winners) and nine points during his first go-round with the Knights, he appears to be part of coach Gerard Gallant’s immediate plans.

Should Smith not be able to go against the Rangers, Pirri is a candidate to skate on the first line with center William Karlsson and left wing Jonathan Marchessault.

Gallant also could reunite Pirri with center Paul Stastny and right wing Alex Tuch, which was an effective trio while Max Pacioretty was on injured reserve.

“If he’s on the third line, that’s fine, too, because if you can make a third line a top-two line basically, you can get three so-called scoring lines,” Gallant said.

With Pirri and center Cody Eakin earmarked for two spots, that would leave Ryan Carpenter, Oscar Lindberg and Valentin Zykov, who hasn’t played since being claimed off waivers on Dec. 29, fighting for the final place on the wing.

When Carrier is ready to return, that will create a bigger logjam among the bottom-six forwards.

The Knights also will have to clear space on the 23-man roster for defenseman Colin Miller to come off injured reserve.

“They’ve been rotating a little bit more with the guys who are sitting out,” Lindberg said. “Every guy who comes in has been playing well. I think that helps the team, too, get guys coming in fresh and hungry to play.”

Brendan Leipsic ultimately lost out in that competition and was shipped to Vancouver for a minor league defenseman at the trade deadline in February.

“Every level you’re at, there’s good players, and it seems like any time I’ve been here there’s other good guys who could be in the lineup, too,” Carpenter said. “You just get used to it, I guess.”