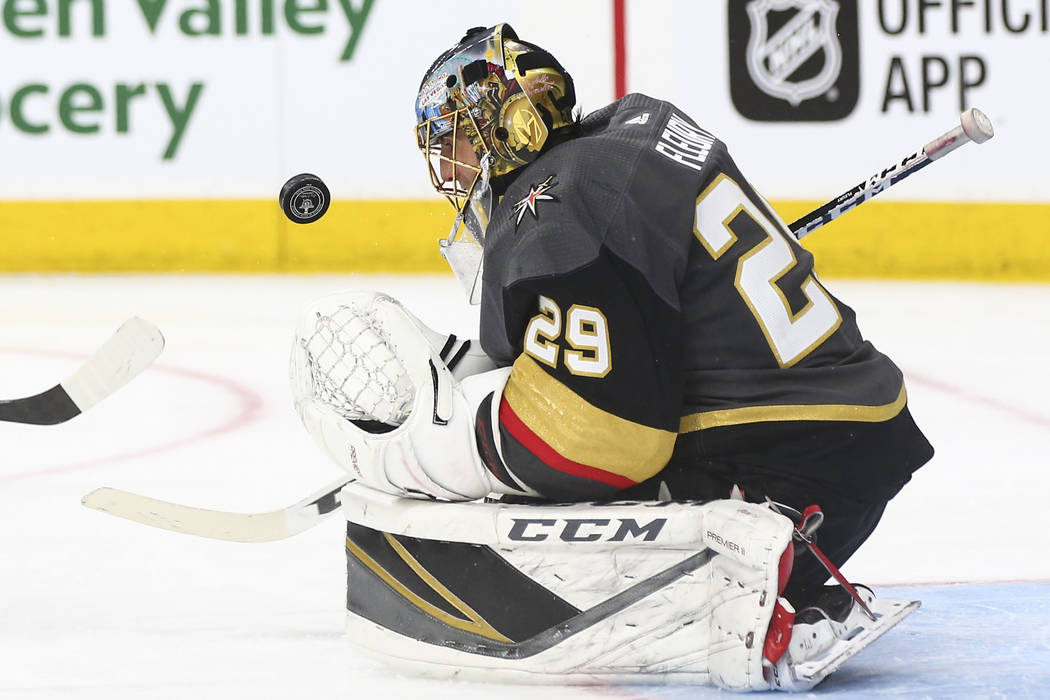 Golden Knights goaltender Marc-Andre Fleury (29) makes a save against the Washington Capitals during the second period of Game 1 of the NHL hockey Stanley Cup Final at the T-Mobile Arena in Las Vegas on Monday, May 28, 2018. Chase Stevens Las Vegas Review-Journal @csstevensphoto

Game 1 of the Stanley Cup Final between the Golden Knights and the Capitals:

2 — Postseason goals by Knights forward Ryan Reaves, who failed to score a goal in 21 regular-season games with Vegas.

2.7 — Seconds left when Knights forward Tomas Nosek scored an empty-net goal that beat the “puck line” at the sports books.

4 — Lead changes, the most in a Stanley Cup Final game.

5 — Playoff points for Nosek, who had 15 points during the regular season.

5.5 — The over/under on the game, which went over on John Carlson’s second-period goal.

9 — Hits by Capitals forward Tom Wilson, the last of which earned him a charging penalty for a blindside hit on Knights forward Jonathan Marchessault.

18 — Blocks by the Capitals, two more than the Knights.

21:52 — Time on ice by Shea Theodore, leading all Knights players.

22 — Takeaways by the Knights.

33 — Faceoffs won by the Knights, two more than the Capitals.

34 —Shots on goal by the Knights, six more than the Capitals.

60-1 — The odds of Knights forward Colin Miller scoring the first goal, which he did 7:15 into the game.