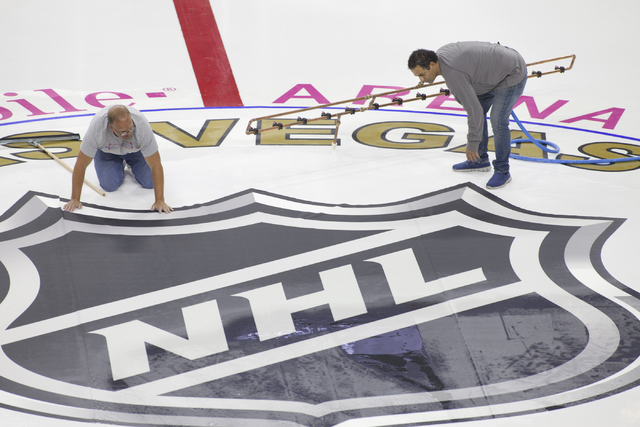 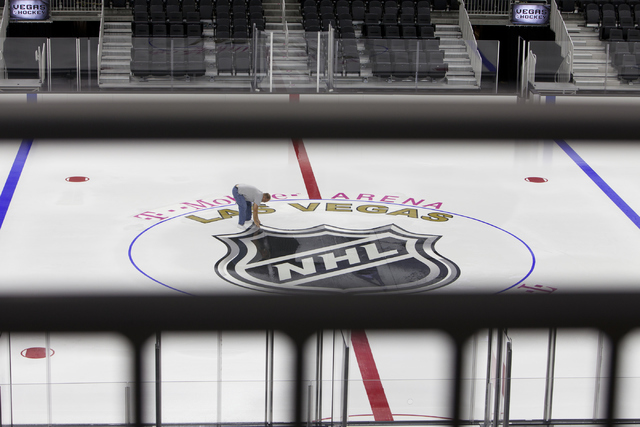 An ice installer lays out the logo for the NHL rink on Saturday, June 30, 2016, at the T-Mobile Arena in Las Vegas. Loren Townsley Las Vegas Review-Journal @lorentownsley

T-Mobile Arena will be the center of the hockey universe June 21, with the NHL announcing its awards show and the Golden Knights’ Expansion Draft will be in Las Vegas.

Both events will be televised live at 5 p.m. on NBC Sports Network and in Canada on Sportsnet. Tickets will go on sale to the public at 10 a.m. May 3.

There will be a special presale for Golden Knights season-ticket holders with information announced in the coming days.

This year will be the eighth time that Las Vegas has hosted the NHL Awards Show.

“To be able to pair this perennial show with the excitement of the Expansion Draft for the Golden Knights is a unique event that we think our fans will greatly enjoy,” said Steve Mayer, the NHL’s executive vice president.

The plan is to have the Golden Knights’ 30 selections announced during the show. Team majority owner Bill Foley wanted to have a party for the franchise’s fan base, but he got a bigger show instead with the inclusion of the NHL Awards.

Along with the expansion draft and the awards will be a variety of musical acts and presenters.

“June 21 will be an incredible day for the city of Las Vegas and our fans,” Foley said. “The anticipation around the expansion draft has been building for months, and that excitement will certainly continue to grow as we get closer to draft day.

“By combining the draft with the NHL Awards, Golden Knights fans will get to experience a monumental day in our team’s history while enjoying one of the premier NHL events that features the game’s biggest stars.”