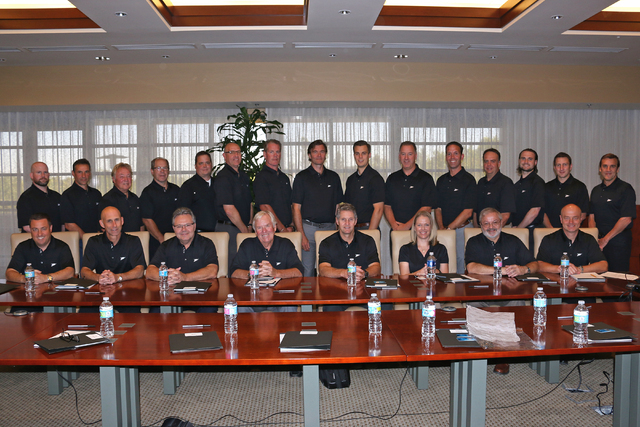 With his hockey operations staff virtually in place and up and running, owner Bill Foley now turns his attention toward building a business, marketing and sales staff for his Las Vegas NHL expansion team.

Foley interviewed six candidates for the president of business operations position and said he is close to selecting that person. Foley enlisted the help of Turnkey Search, a New Jersey-based company that helps pair companies searching for sports executives. However, he would not reveal the identities of the six finalists.

“We’re very close,” Foley said last week from California. “They’re all highly qualified and they all come from a hockey background. I’m hoping we will have an announcement as early as next week.”

Four more pro scouts — Jim McKenzie, Vaclav Nedomansky, Mike Foligno and Vince Williams — were hired last week. McKenizie, 46, played 15 NHL seasons as a forward while Foligno, 57, played 16 NHL seasons as a forward while Nedomansky, 72, is best known for being the first player from an Iron Curtain country to defect to the West when he left Czechoslovakia in 1974 to join the Toronto Toros of the World Hockey Association. Nedomansky, a center, played four years in the WHA and six in the NHL. Williams, 40, a career minor league defenseman, had been coaching in the ECHL with Trenton and Orlando.

The team currently has 27 employees on its hockey operations staff.

Earlier this month, the team held an organizational meeting at the team’s temporary offices in Summerlin to go over strategies and map out a course for what areas to start scouting players, both amateur and professional. Foley sat in on the meeting run by general manager George McPhee and he came away impressed with the quality of the hires.

“What I love about these guys is the diversity of their hockey experience,” Foley said. “George didn’t just hire all his friends from the Washington Capitals. He ‘s got guys from the Florida Panthers, New Jersey Devils, Montreal (Canadiens) and it’s a nice blend of ages.

“The overall knowledge in the room was incredible and George deserves all the credit. In less than two months, he’s put a great staff together and it’s exactly the way I would want it.”

McPhee said assistant GM Kelly McCrimmon deserves a lot of the credit for putting together the staff.

“It was special to walk around the room and see so many impressive names,” McPhee said. “Kelly did yeoman’s work and he was huge in identifying and helping me with the hires.”

McPhee said the meetings were important because it was a chance for everyone to be together and share the message he and Foley have for the culture of the organization.

“We wanted them to know what we are and what we stand for,” McPhee said. “The rest of the time was nuts-and-bolts stuff, like assignments and schedules, things like that.”

The NHL’s Board of Governors meets Friday in New York City. But Foley will not be attending.

Foley is still making the payments on the $500 million to join the NHL and until payment is made in full, which is expected next spring, he doesn’t have his seat at the table.

The final payment is due in April. Which means Foley will likely miss the BOG meeting in Florida in mid-December as well. However, it is not known if the league will allow McPhee to attend the all-important general manager meetings in March in Boca Raton, Florida.

“I don’t know,” McPhee said when asked if he’ll be able to attend. “We’ll see what the league has to say.”

Las Vegas will hold its first of what will be many mock drafts the weekend of Oct. 8-9 at the team’s Summerlin office. McPhee and several members of his staff will participate in the trial run.

The team has already begun speculating which players will be available for the NHL expansion draft, scheduled for June 20, 2017. Each of the 30 current teams will be able to protect 11 players from their 23-man active rosters.

“It’s our first chance to go through the process and see what the rules are,” McPhee said. “We’ll be doing several (mock drafts) over the course of the season and getting feedback from the NHL so we’re ready in June.”