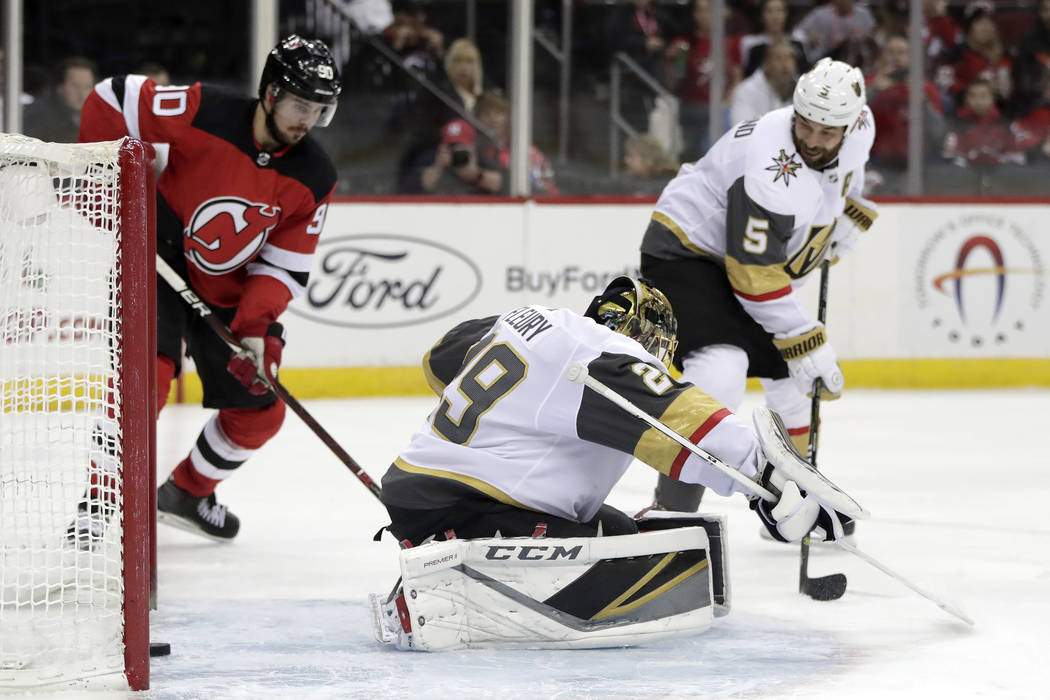 A shot by New Jersey Devils center Travis Zajac, not pictured, gets by Vegas Golden Knights goaltender Marc-Andre Fleury (29) for a goal during the second period of an NHL hockey game, Friday, Dec. 14, 2018, in Newark. (AP Photo/Julio Cortez) 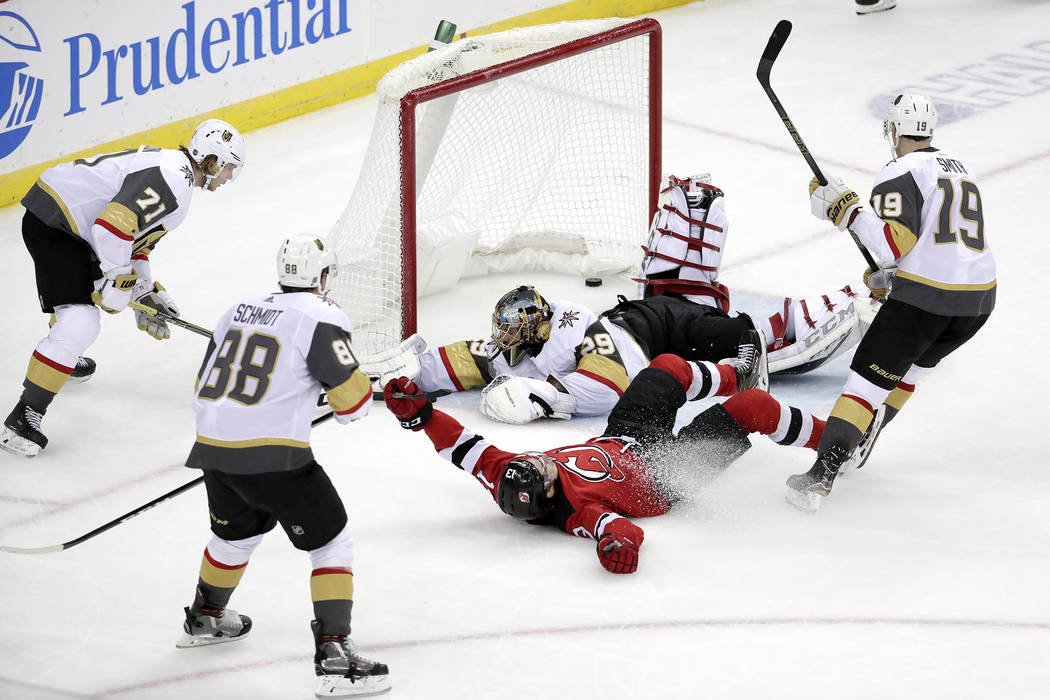 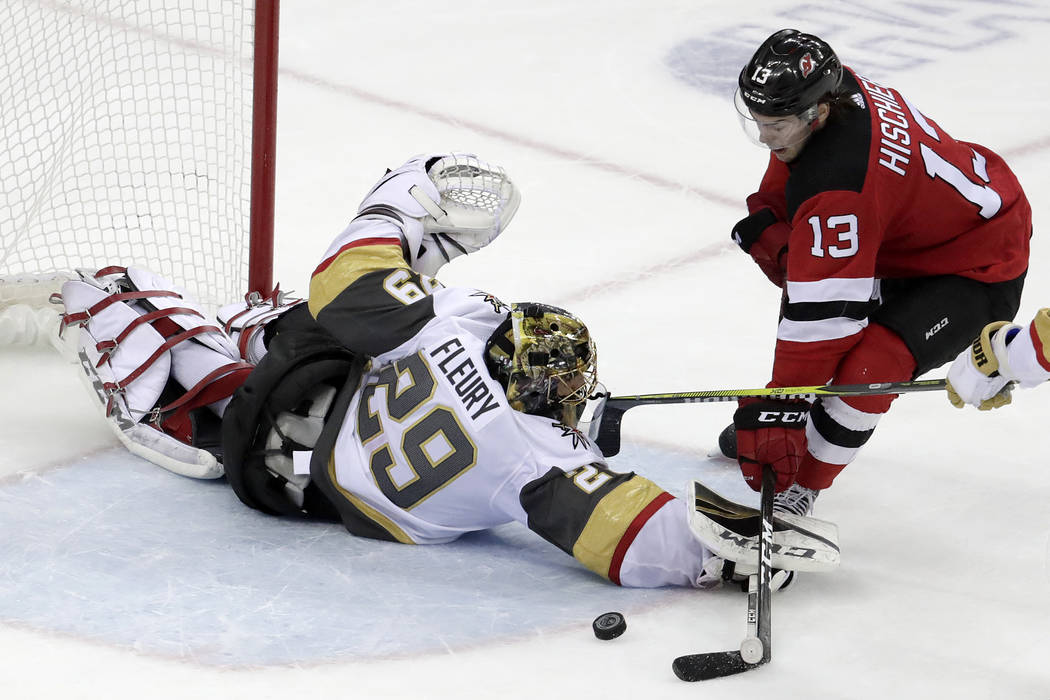 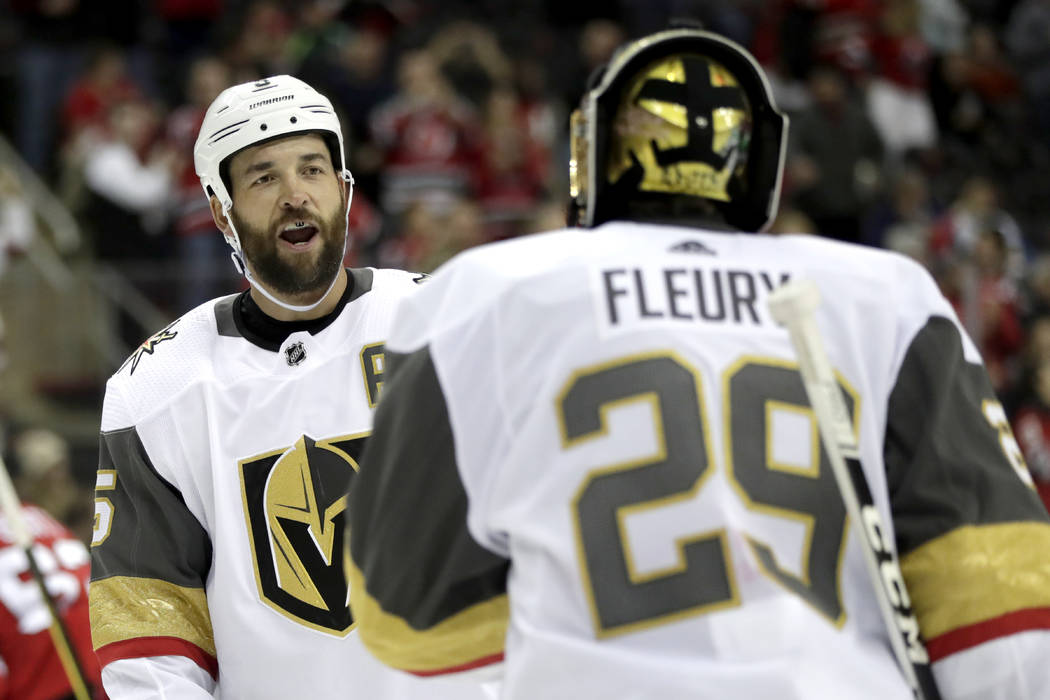 Malcolm Subban will start in net when the Golden Knights begin a three-game homestand Sunday against the New Jersey Devils at T-Mobile Arena.

Opening faceoff is 1 p.m., and the game will be televised on AT&T SportsNet Rocky Mountain.

They can tie idle Calgary (56 points) atop the Western Conference standings with a victory.

Subban is making his first start at home and first appearance at T-Mobile Arena since opening night Oct. 4 against Philadelphia when he relieved Marc-Andre Fleury.

Subban has allowed one goal in each of his past two appearances, including a 30-save effort on Dec. 29 in a 4-1 victory over Los Angeles. He is 1-5 with a 3.10 goals-against average and a .895 save percentage.

Defenseman Shea Theodore, who was scratched from Friday’s 3-2 victory at Anaheim due to illness, practiced Saturday and will play against the Devils.

Left wing Max Pacioretty missed practice Saturday after the birth of his son and also will be in the lineup.

The Knights are 13-3-3 at T-Mobile Arena, the best home record in the Western Conference by points percentage (.763).

New Jersey rallied from a pair of three-goal deficits to earn a 5-4 overtime victory over the visiting Knights on Dec. 14.

The Devils (16-17-7) defeated Arizona 3-2 in a shootout Friday and have points in five of their past seven games to climb out of last place in the Metropolitan Division. Coach John Hynes, in his fourth season with New Jersey, signed a multiyear contract extension Thursday.

Goaltender Keith Kinkaid had to relieve Mackenzie Blackwood (lower body) in the first period against the Coyotes and is scheduled to start Sunday. New Jersey recalled Cam Johnson from the American Hockey League to serve as the backup.

The Devils have struggled away from home with a 5-13-3 record and rank 30th in road points percentage.

One bright spot for New Jersey is its penalty kill, which ranks second in the league at 85 percent.