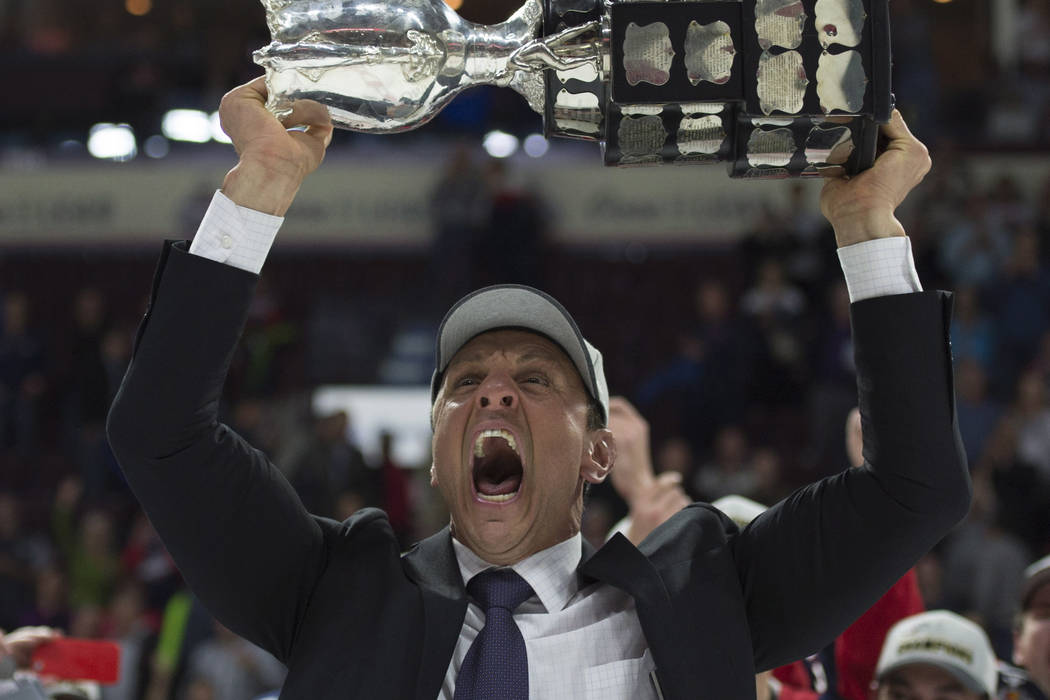 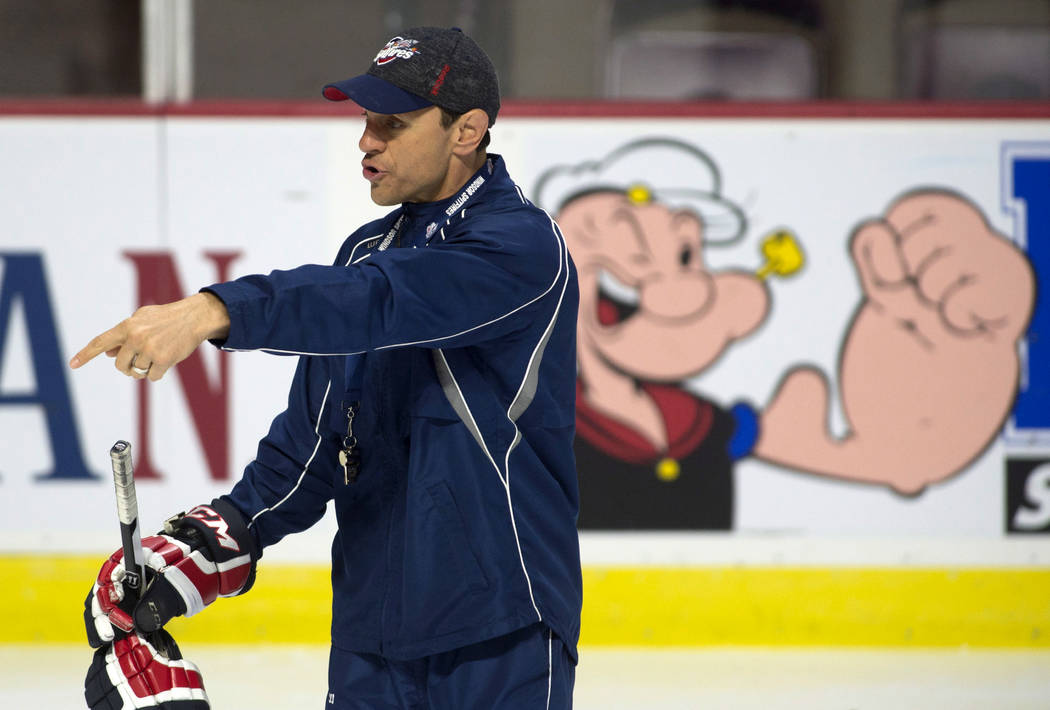 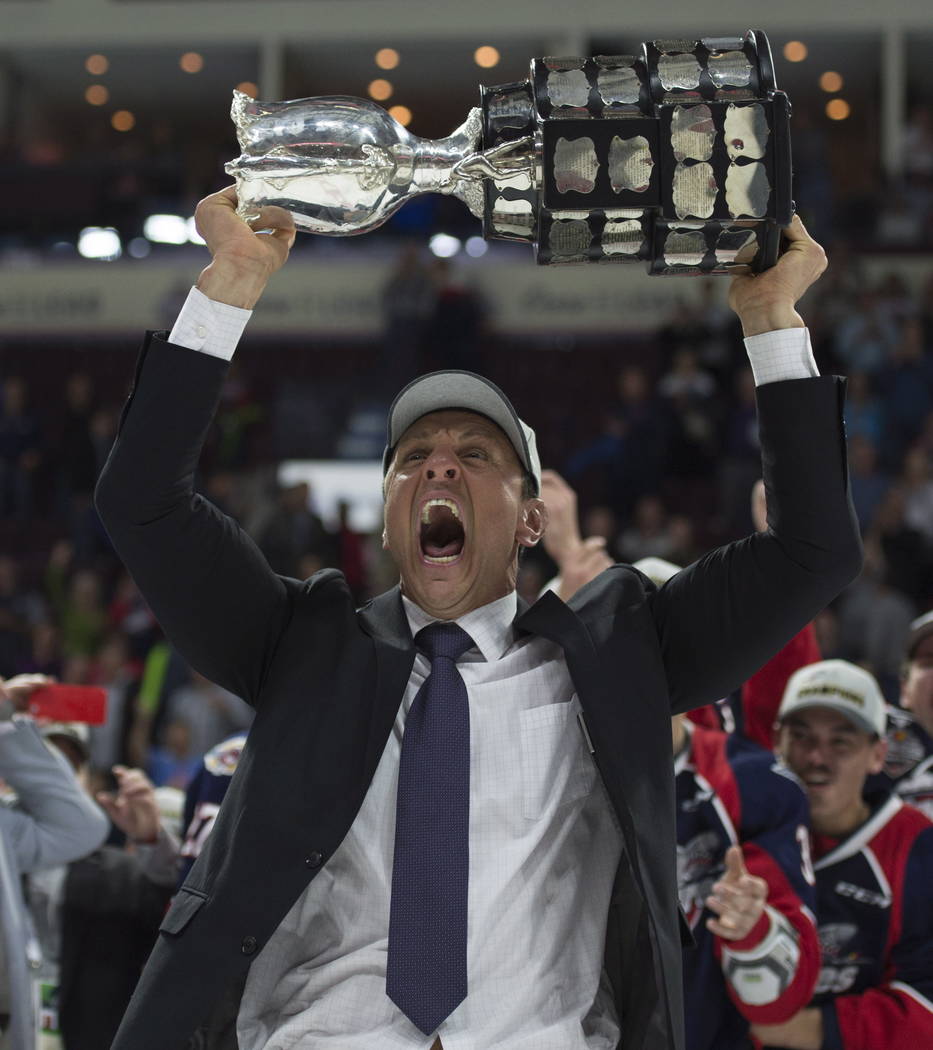 As a player, Rocky Thompson never ducked a battle.

Want proof? Look no further than the 2,036 penalty minutes he racked up plus the 94 fights he participated in during his professional career from 1995 to 2007.

As a coach, Thompson has shown he’s not afraid of a challenge. After successfully working as an assistant coach in the American Hockey League, Thompson did an excellent job in his first opportunity as a head coach, turning around the Windsor Spitfires from a last-place team to Memorial Cup champions in just two seasons.

The 39-year-old Calgary native now faces a new challenge. He’s back in the AHL, this time as the head coach of the Chicago Wolves, the Golden Knights’ top farm team. He has been entrusted with developing the Knights’ young players and having them NHL-ready. He is also working for an ownership group in Chicago that wants to win the Calder Cup.

“I think trust is the most important thing,” Thompson said Thursday. “I have great relationships with all the people involved and they’ll know that I’m somebody who can be trusted.”

Perhaps he’ll forge another path to success. He managed to do so with Windsor. When he got to the Spitfires in 2015, they were a last-place team in the Ontario Hockey League. In his first season, the team improved by 35 points, posting a 40-21-6-1 record and finishing with 87 points. This year, the Spitfires had 90 points and won the Memorial Cup for the first time since 2010.

“We were the youngest team in the league,” he said. “We had to learn how to win. But we put down a foundation for success and the people with the Windsor Spitfires were great to work with.”

Thompson said he expects a more veteran roster with the Wolves.

“I would assume we’ll have a little older team than normal given the circumstances of the Golden Knights being a first-year team,” he said. “But I don’t think it will change the way I coach. I’ve learned that you treat players differently, but in the locker room you have a family culture where everyone trusts one another.”

Thompson will spend time with general manager George McPhee, head coach Gerard Gallant and the rest of the Knights’ hockey operations staff over the next three weeks. He’ll assist Gallant at the team’s development camp June 27 to July 1 at the Las Vegas Ice Center. It should prove to be time well spent as he gets a feel for the organization’s philosophy and how his coaching style and philosophy meshes.

“I’m looking forward to it,” he said. “It’s a chance for me to get comfortable with the organization and learn from everyone.”

Thompson said as a player did what he needed in order to survive in the game. Today’s game doesn’t necessarily require enforcers. It’s about speed and skill and he prefers being involved in that kind of game than the old roughhouse days when he played for 11 teams in a 13-year span.

“I love the competitiveness of today’s game,” he said. “You have to be willing to learn and to adjust. For me, I want to win and whatever it takes for us to win, whether it’s new ideas or different methods, I’m all ears.”